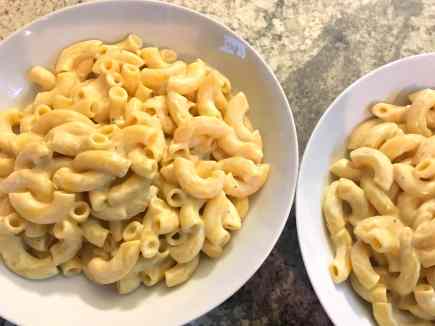 Cashews are magic! I am in love with Cashew Mac and Cheese with Coconut Bacon! What can I say? It’s a game changer.

First, we ate the most incredible mac and cheese I have ever eaten. It was served in an iron skillet, and it was so creamy and delicious, I couldn’t believe it was vegan. Of course, I asked how it was made. The waitress said it is a combination of raw cashews, miso, and coconut milk. So, after many trial and errors, I mastered it.

Then, I figured why not make it more decadent by adding coconut bacon. Although I have made tempeh bacon, as well as mushroom, eggplant and soy bacon, coconut bacon is by far my favorite. And, it is so easy to make.

I hope you love this mac and cheese as much as I do. Add the coconut bacon, or leave it off. 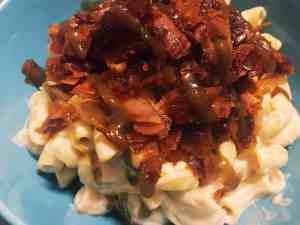 For the bacon, recipe click the link Vegan Coconut Bacon

It is fabulous either way. Add a little hit sauce to kick it spa notch, if that is your thing.

This smokey, creamy, and delicious Mac and Cheese melts in your mouth. Add Coconut Bacon and take it to the next level!