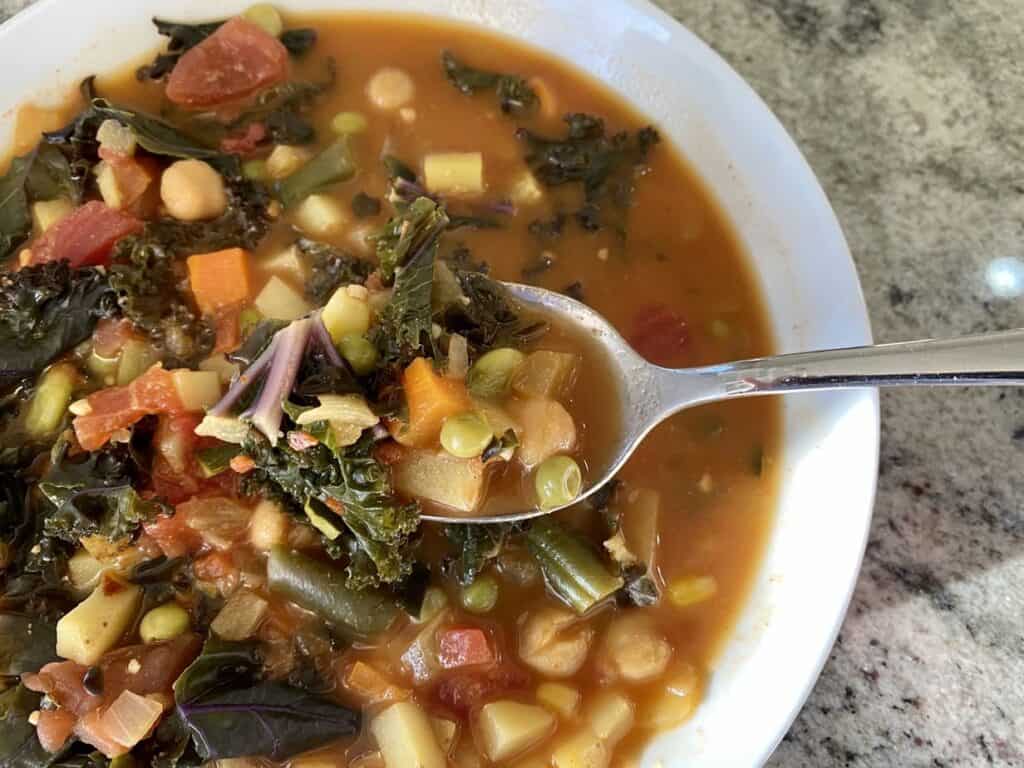 As you probably know by now, I love soup! Actually, I could eat soup all year long, regardless of the weather. But, as we all know, winter is soup time, and I can't get enough. Chickpea soup, for example, is loaded with veggies and is simply MM MM Good!

Although I love my crockpot, I decided to make soup on the stove because I was meal prepping, and chickpea soup all goes in one pot.

Despite my choice to cook stovetop today, I have supplied crockpot directions for those of you who prefer.

To make sure I included as many vegetables as possible, I used a combination of frozen and fresh vegetables.

And, of course, this is a great soup to pack and take to work for lunch as well. 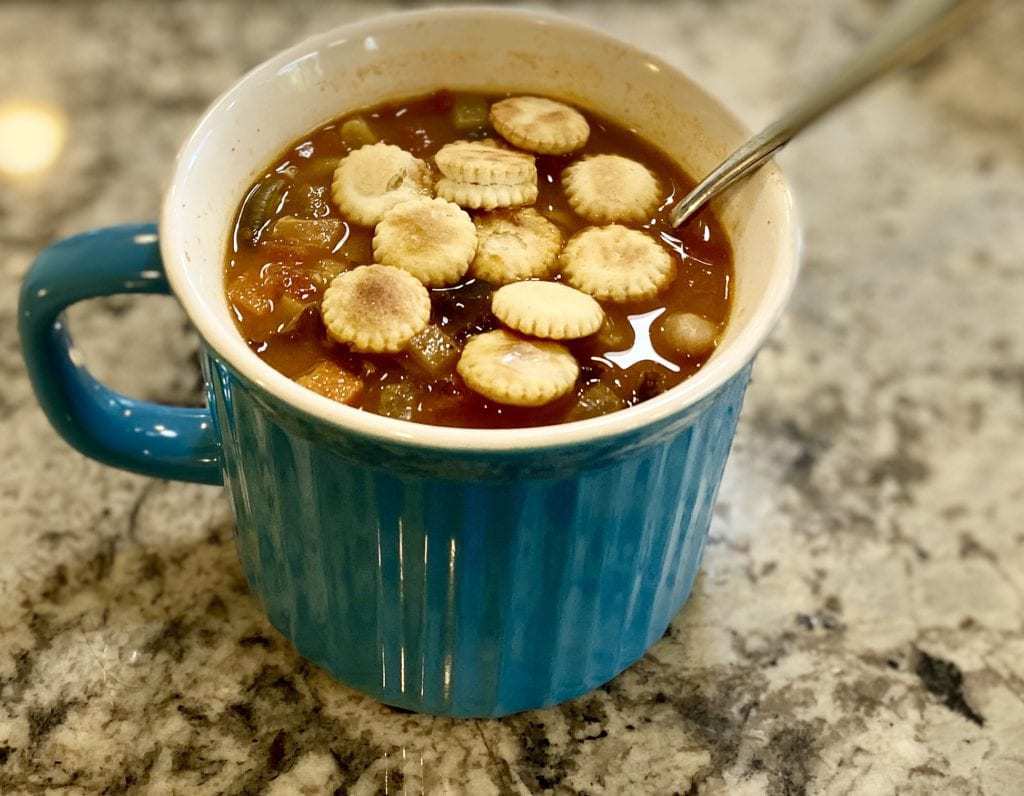 CHICKPEAS, VEGGIES, AND BROTH OH MY...

To include as many veggies as humanly possible, I started with a bag of frozen vegetables. Unlike most combinations, this bag was the motherload of veggies; carrots, peas, green beans, edamame, and corn.

Then, I added my own potatoes, garlic, onion, celery, and Redbor kale. Of course, the chickpeas and roasted tomatoes are canned, but the soup is so easy to throw together, it's almost criminal.

What I like about this soup, along with the veggies, is the tasty tomato-rich broth. With the special blend of seasonings and the nutritional yeast, it is somewhat spicy with a thick cheesy flavor.

WHAT KALE IS THE BEST TO USE IN CHICKPEA SOUP 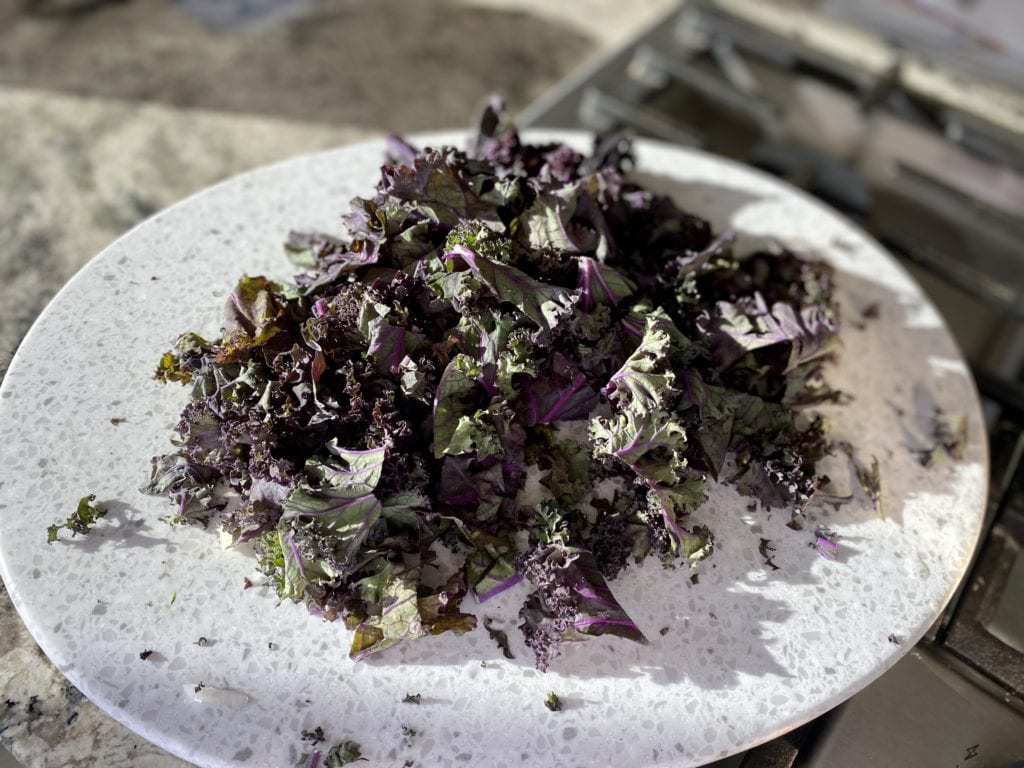 Although the most common kale found in the grocery store is curly kale, I chose to use Redbor kale for its beautiful purple color. Also, I think Redbor kale is best used in soups and stews.

In fact, I learned the hard way that some kinds of kale are good to eat raw, like curly kale, while Redbor kale needs to be cooked, or it causes stomach issues.

When eaten raw, some kales are so dense; they don't digest well.

But, cooked, Redbor kale is the perfect texture, flavor, color, and wilts perfectly when added to soups and stews.

And although it all cooks in one pot, to get the best flavors from the vegetables and seasonings, it's best to add a few ingredients at a time.

First, I start by sauteeing the onions and garlic with a little vegetable broth to avoid sticking in the pan. 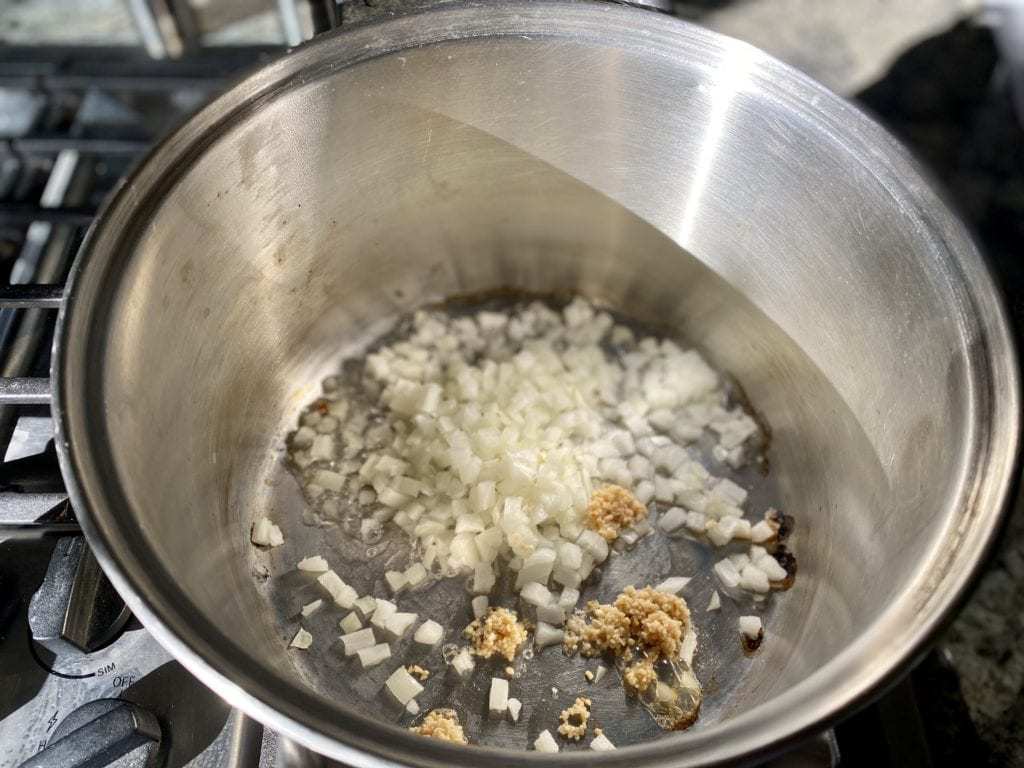 Then, I add the seasonings, nutritional yeast, the potatoes, and enough vegetable broth to cover the potatoes.

Then, I reduce the heat to simmer and cook for 10 minutes. The potatoes, which take longer to cook, are also like sponges, absorbing the garlic's flavors, onions, and spices. 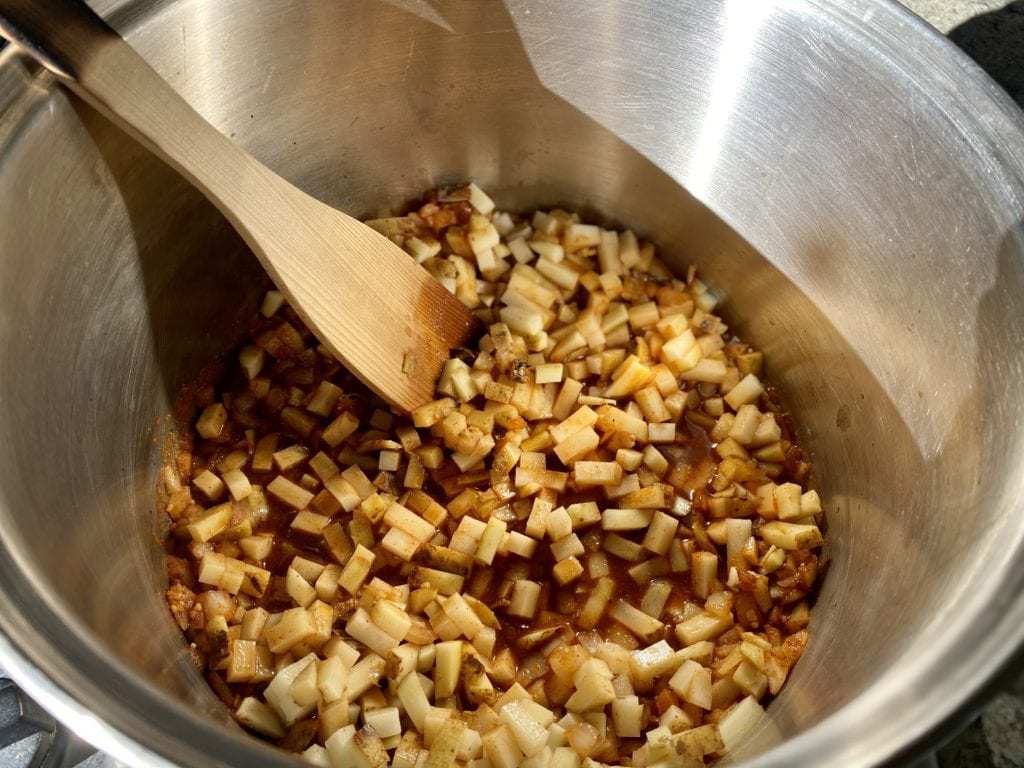 MAKING THE REST OF THE CHICKPEA SOUP IS EASY

Then, the rest is simple. Now, everything else is added except for the kale and bring to a boil again.

Next, it's time to reduce again to simmer and cover for 20 minutes, so the veggies and flavors brew.

Once cooked, remove the lid, and add the chopped kale to the piping hot soup. Even though the soup is done cooking, the broth's heat wilts the kale without having to continue cooking. 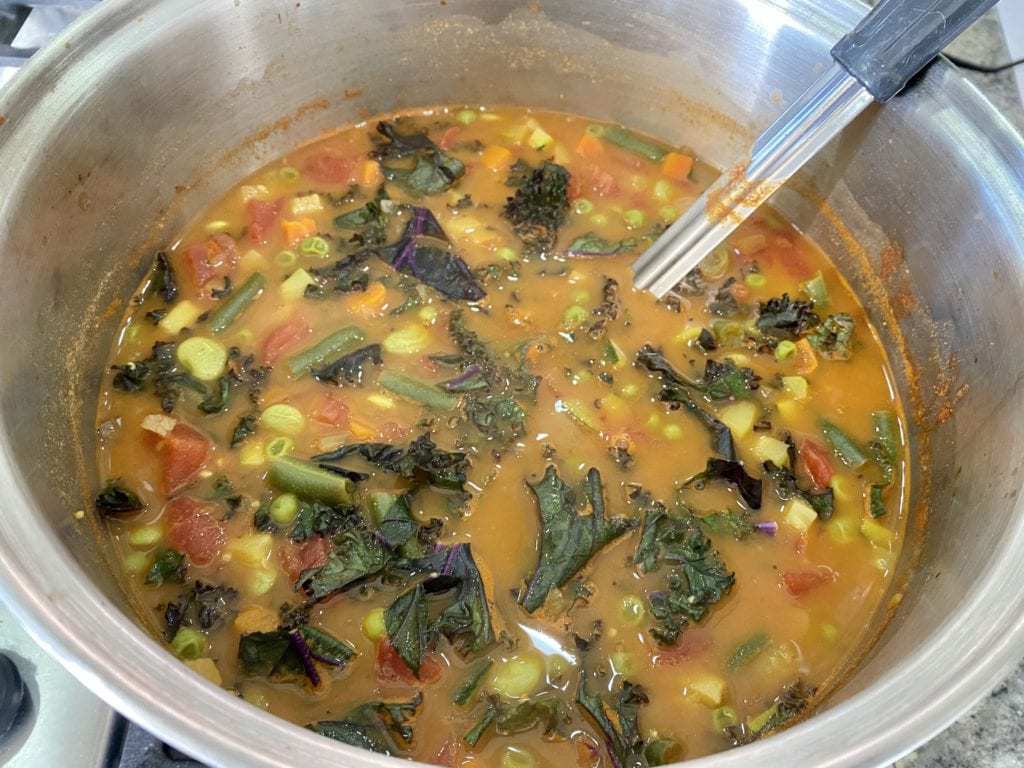 As a result, you end up with a chickpea soup filled with veggies in a thick and creamy tomato broth. Just ladle it up and eat! 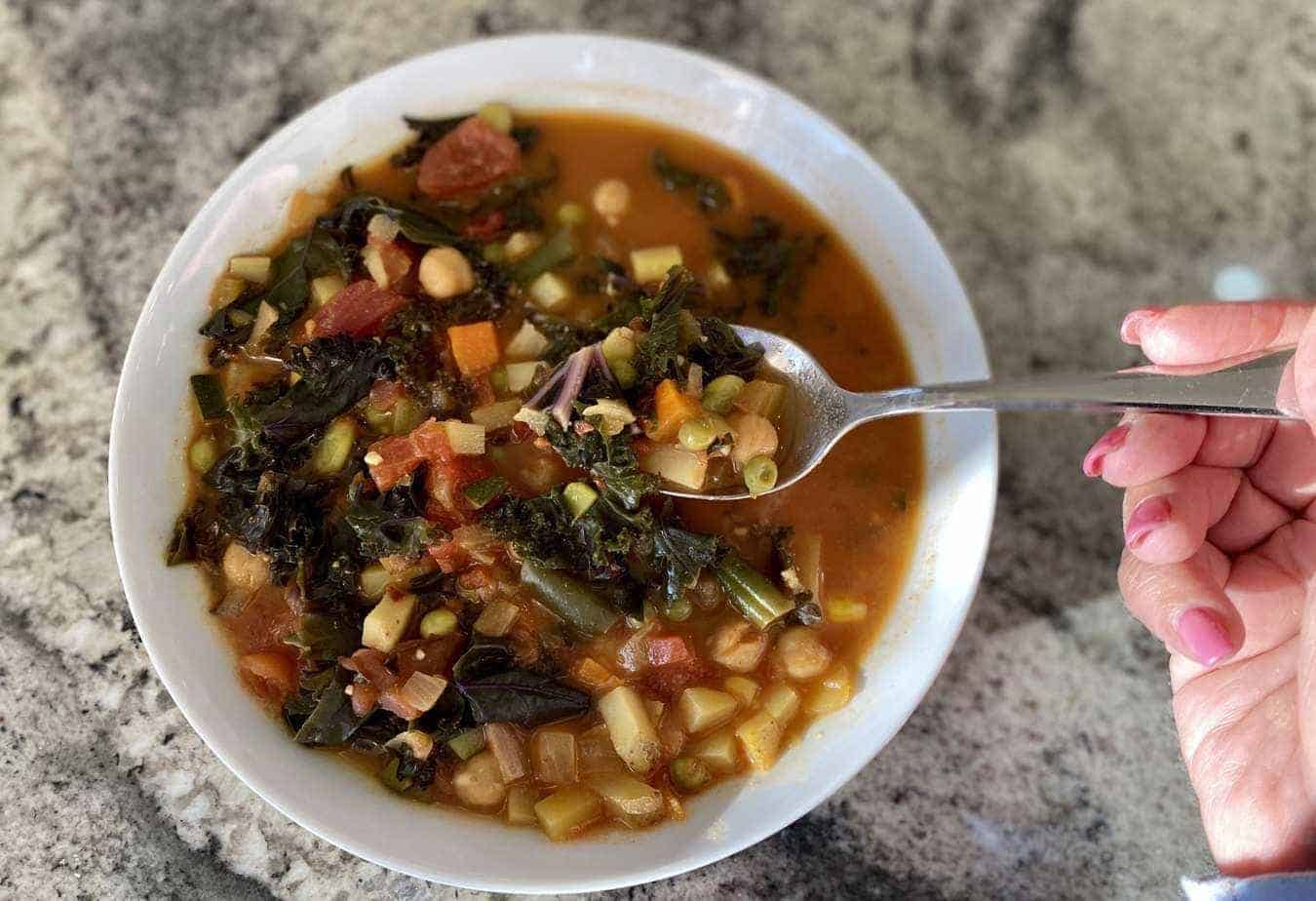 If you love soup, as I do, check out some of my all-time favorites: 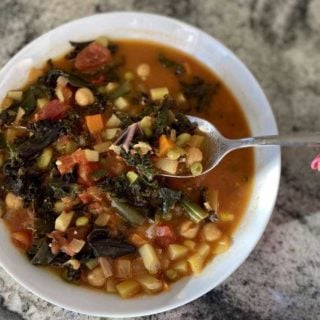