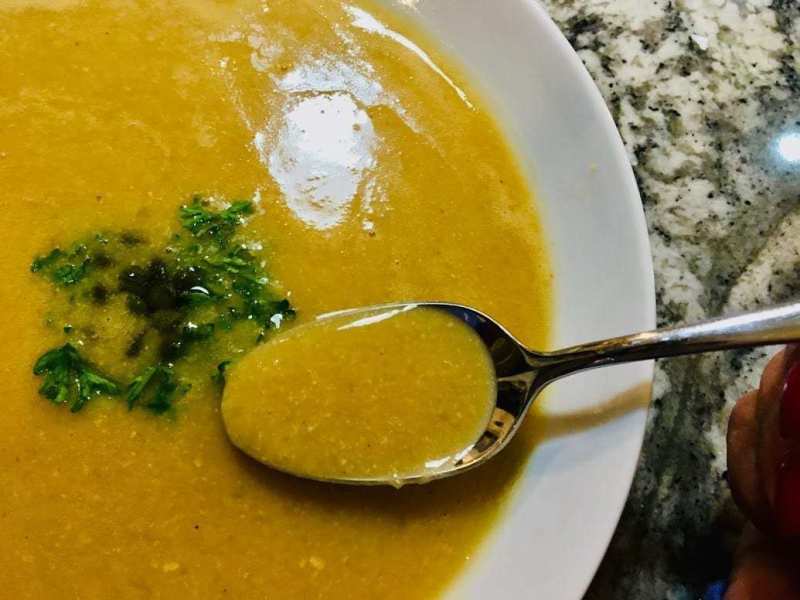 When the weather gets chilly, soup warms me from within. In fact, I eat soup all year round, but there’s something special about hot soup on a cold winter’s day. For that reason, I decided to make a simple, and incredibly tasty creamy white bean soup.

Recently, I read an article in a cooking magazine I subscribe to that suggested using the aquafaba from the bean can in the soup. So, I decided to give it a try. As usual, I was hopeful for a great outcome, and I was pleasantly surprised.

First, creamy white bean soup with herbs and capers is not only was to make, it has very few ingredients. Great Northern beans are beans that are white colored, but also light in flavor.

Next, I chose to make a blended soup, not only to create a creamy soup, but to meld all the flavors in a rich and cream white bean soup. With that in mind, I chose to use yellow onion, garlic, and thyme for light but subtle flavoring.

Surprisingly, the bean aquafaba, creates a thickening agent for the soup, and the flavors of the white beans are enhanced. In order to make the soup the right consistency, you can use a high speed blender or an immersion blender.

Actually, you don’t need any nuts or plant based milk. The creaminess in the creamy white bean soup is only beans, vegetables, and seasonings.

Subsequently, you will end up with a savory, delicious creamy white bean soup with herbs and capers. As a matter of fact, if enjoy this creamy soup, you will love Creamy Butternut Squash and Potato Soup, Cauliflower Bisque Soup with Paprika and Chives, and Savory Herb Creamy Potato Leek Soup.

Creamy and savory, this creamy white bean soup is the perfect comfort food for a cold winter day or evening.