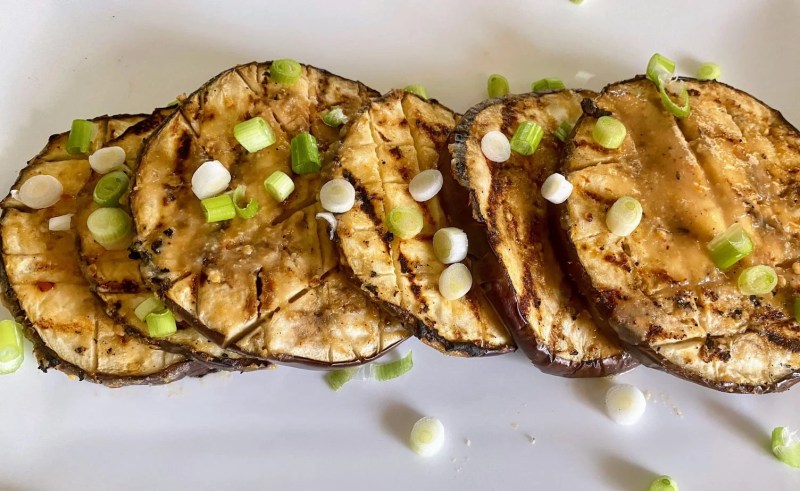 I love Asain food, and my inspiration comes from eating authentic Asian food. Often times, however, restaurants use a lot of oil when they cook. So, I try to mimic my favorite recipes without using oil, and try to capture the flavors I taste in the foods I love.  Eggplant with miso, for instance, is one of my favorites. One of my favorite sushi restaurants serves a roasted miso eggplant recipe, which is literally to die for.

When I asked my waitress what ingredients were used to make the eggplant with miso, I wasn’t surprised. Not only does their miso eggplant contain sesame oil, but it also was full of sugar. My eggplant with miso recipe, however, tastes just as delicious, and with a few changes, I captured the texture, taste, and flavor without the oil and sugar!

Eggplant, when eaten raw, tastes somewhat bitter. Once cooked, though, the taste becomes milder and a bit richer. And it’s spongy texture allows for sauces to absorb. The end result is a soft, creamy texture that tastes magical.

Even though eggplant with miso can be roasted in the oven, I chose to cook mine on the grill, because it’s summertime, and I love grilling. Or, should I say, my husband, the grill master, enjoys chilling and grilling. Any time I can pass off turning on the oven works for me. I did, however, include an oven version for those who prefer to cook indoors.

Believe it or not, there are 16 different varieties of eggplant. But, the three most commonly used eggplant are Japanese, Globe, and Italian eggplant.

Obviously, the Japanese restaurant where we ate miso roasted eggplant used a Japenese eggplant, which is long, thin, and light purple.

Because I planned to grill, instead of roast my eggplant with miso, I chose the heartier sliced Globe eggplant.

THE BEAUTY OF COOKING WITH MISO…EGGPLANT WITH MISO SAUCE

As a fermented food, miso provides beneficial gut bacteria that help us to stay healthy, vibrant, and happy; good gut health is known to be linked to our overall mental and physical wellness.

In my opinion, miso is such a wonderful ingredient simply because it adds immediate flavor to almost anything I make. Often, I use miso in sauces as well as dressing, but I figured why not roasted my eggplant with it as well.

In fact, there are different varieties of miso:

White Miso (Shiro) is made from soybeans and rice and fermented for no longer than two months. Shiro (means “white” in Japanese) is light in color and sweet to mildly salty. Shiro, for example, is very versatile and provides a bit of oomph to salad dressings or sautéed vegetables.

Another mild type that is fermented for slightly longer than white miso, is yellow miso (Shinsu). Yellow miso is adaptable in a wide range of recipes, as well.

If a recipe calls for dark miso, you’ll want to use an aka or red miso. Russet in color, this type is made from a higher proportion of soybeans, is fermented for up to three years, and is saltier and deeper in flavor. Its full flavor is best used in hearty dishes like stews and tomato sauces. Use with caution – its flavor can overpower other ingredients.

Barley Miso (Mugi), from barley and soybeans,  usually has a longer fermentation process than most white miso. It has a strong barley aroma but is still mild and slightly sweet in flavor. 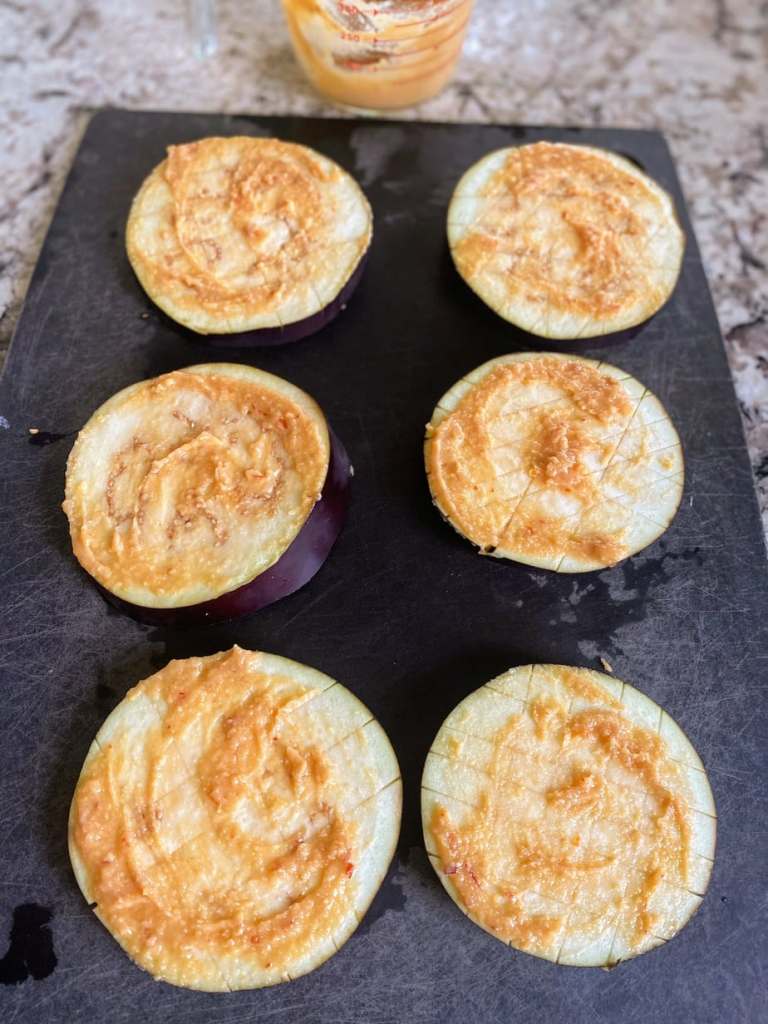 SCORING THE EGGPLANT FOR EGGPLANT WITH MISO 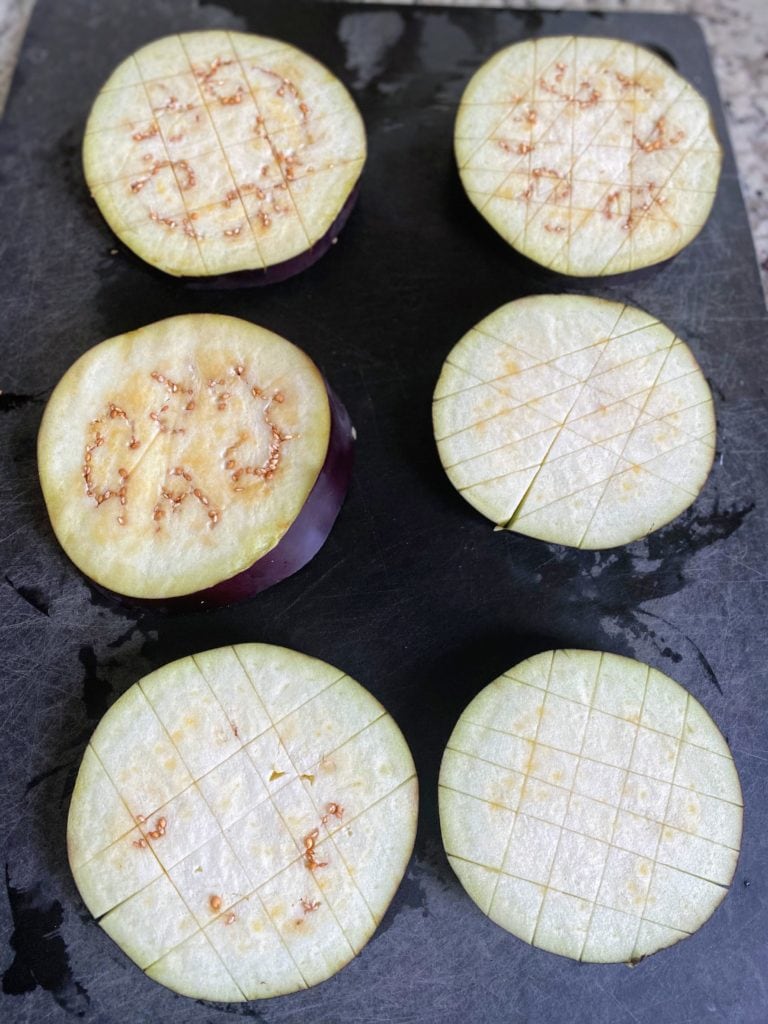 In culinary terms, scoring means to cut slits on the surface of a piece of food.  Generally, 1/2 centimeter slits are cut on a diagonal before rotating the zucchini slices 90 degrees and cutting again to make a diamond pattern (on both sides)

WHY SCORE THE ZUCCHINI SLICES?

For a variety of reasons – but the most common are for appearance. In this case, it also increases surface area, so the miso absorbs into the scored area, going through the eggplant.

Once scored, I used a basting brush and cover the eggplant surfaces, on both sides, with the miso sauce. The remaining sauce, then, is used during the grilling process to add even more flavor.;

HOW TO GRILL EGGPLANT WITH MISO 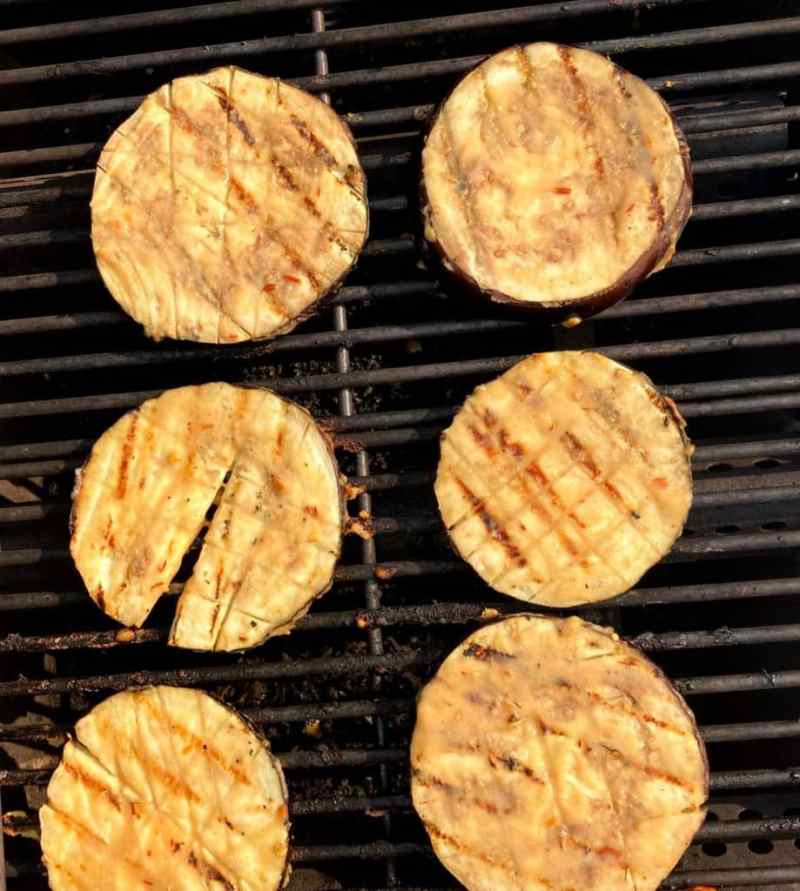 First, preheat the grill to 425 (medium), and wait until it reaches the perfect temperature before putting the sliced eggplant on the grill. 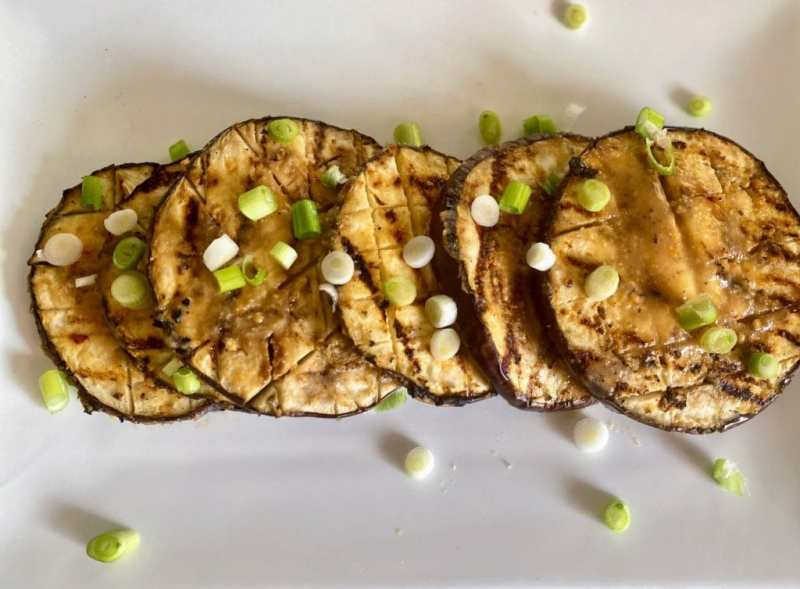 DO YOU LOVE ASIAN CUISINE? HERE ARE SOME OF MY FAVORITES

Eggplant with miso is a classic Asian dish transformed into a healthier oil-free version. Enjoy grilled miso eggplant as a side dish, entree, or add to the top of your favorite Asian recipes.

ROASTING OPTION IN THE OVEN