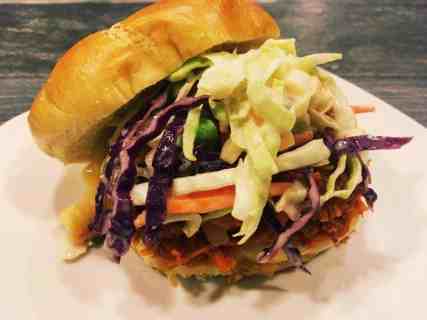 Who needs pulled pork when you can have BBQ “Pulled” Sweet Potato Sandwiches? We love BBQ anything; vegan that is. In fact, I try to create several version of not only BBQ sauces, but also vegetables to transform into BBQ dishes. Today, I decided to try a “pulled” sweet potato recipe I played around with. I was a little apprehensive about how the texture would work out. The results were amazing.

Just like hash browns, I placed them in a bowl and added dice onions, garlic, garlic powder, onion powder, some salt and pepper, as well as a diced jalapeño pepper.

Next, using my large non-stick skillet, without any oil, I cooked them just like hash browns. I browned them and made them extra crispy.  Adding the homemade BBQ sauce  immediately softens the potatoes, making them absorb the BBQ sauce.

My husband actually said, “that looks like pulled pork.”

“Not in this house,” I laughed.

I topped the sandwiches with pineapple coleslaw I had prepared earlier in the day, and dinner was served. Pineapple and BBQ just go together in my mind, but feel feel to top your sandwich with whatever you enjoy!

If you LOVE BBQ like I do, you will love this "pulled" sweet potato sandwich recipe. It is easy to make and will disappear from your dinner table in minutes.

Shred the Sweet Potatoes and Add Vegetables and Seasonings: