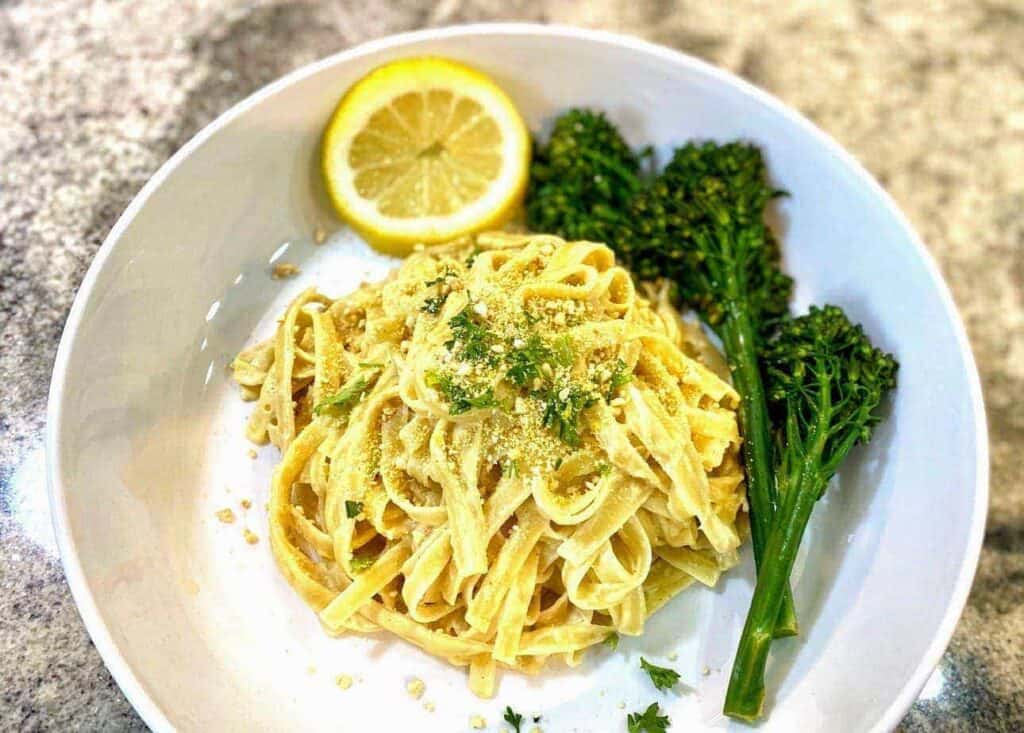 When I crave comfort food, I yearn for creamy pasta! Comfort food, though generally a guilty pleasure, can be guilt-free and delicious. Although I have tried several vegan fettuccine alfredo recipes, I finally developed a sauce worthy of celebrating over the years.

Although simple to make, vegan fettuccine alfredo requires a creamy sauce that won't dry out and leave the noodles gummy. And, the goal, of course, is for it to be as decadent as it is creamy.

Despite its fancy appearance, vegan fettuccine alfredo takes 15 minutes to make from start to finish!

OODLES AND OODLES OF FETTUCCINE NOODLES

So, why should you use fettuccine noodles instead of other noodles? Fettuccine is hearty enough to accommodate heavier sauces, such as alfredo sauce.

Even though it is called vegan fettuccine alfredo, it doesn't mean you can't use the alfredo sauce on any noodle you have available.

WHAT IS THE SECRET TO FABULOUS ALFREDO SAUCE?

Many vegan fettuccine recipes, for instance, are made with cauliflower or white beans. On the other hand, the creamiest vegan alfredo sauce is made from a combination of ingredients.

Not only is it the combination and amount of ingredients that makes the BEST vegan alfredo sauce. Instead, it is the little secrets to getting it just right.

My first secret is to saute the diced shallot and minced garlic together BEFORE blending with the rest of the ingredients. To prevent the shallots and garlic from sticking in the pan, I use a little vegetable broth, which also helps to brown and carmelize the onions without oil.

If you are making the vegan alfredo sauce ahead of time and planning to reheat it, you need to add half a cup of vegetable broth.

However, the last trick of perfect alfredo sauce is the combination of vegetable broth and plant-based milk.

Now that you know my little secrets let's make a quick, easy, elegant dinner in 15 minutes. 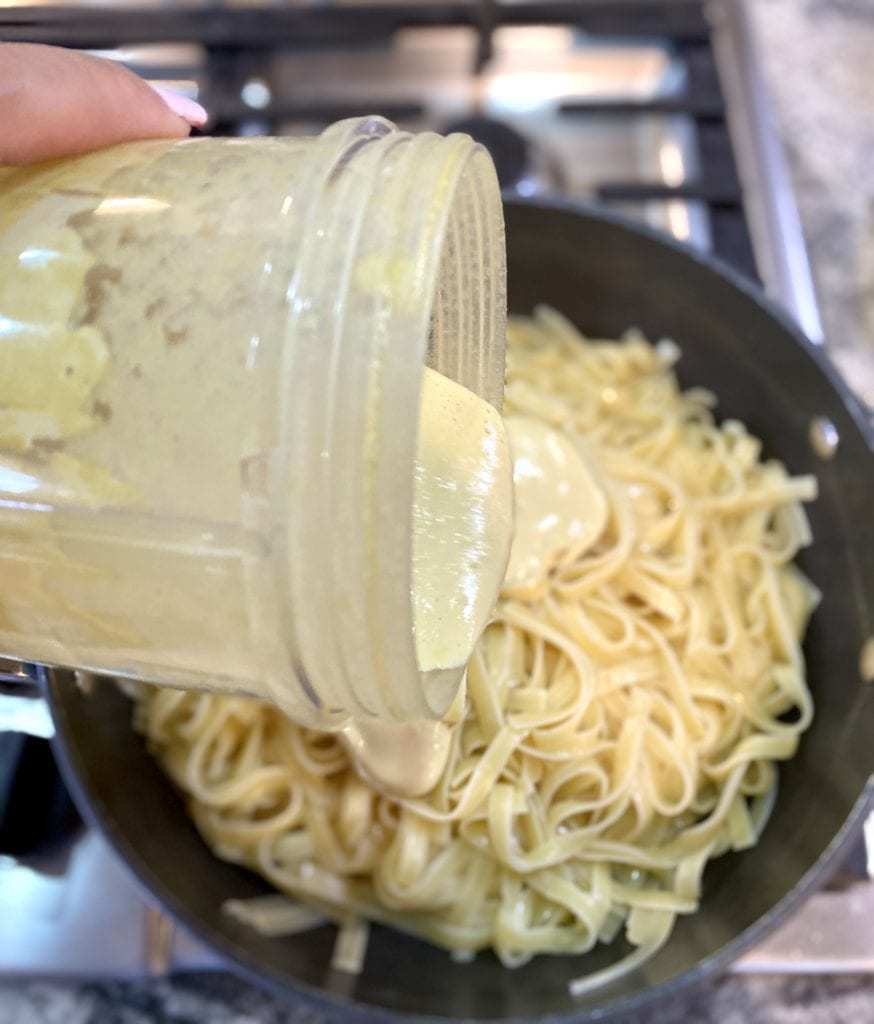 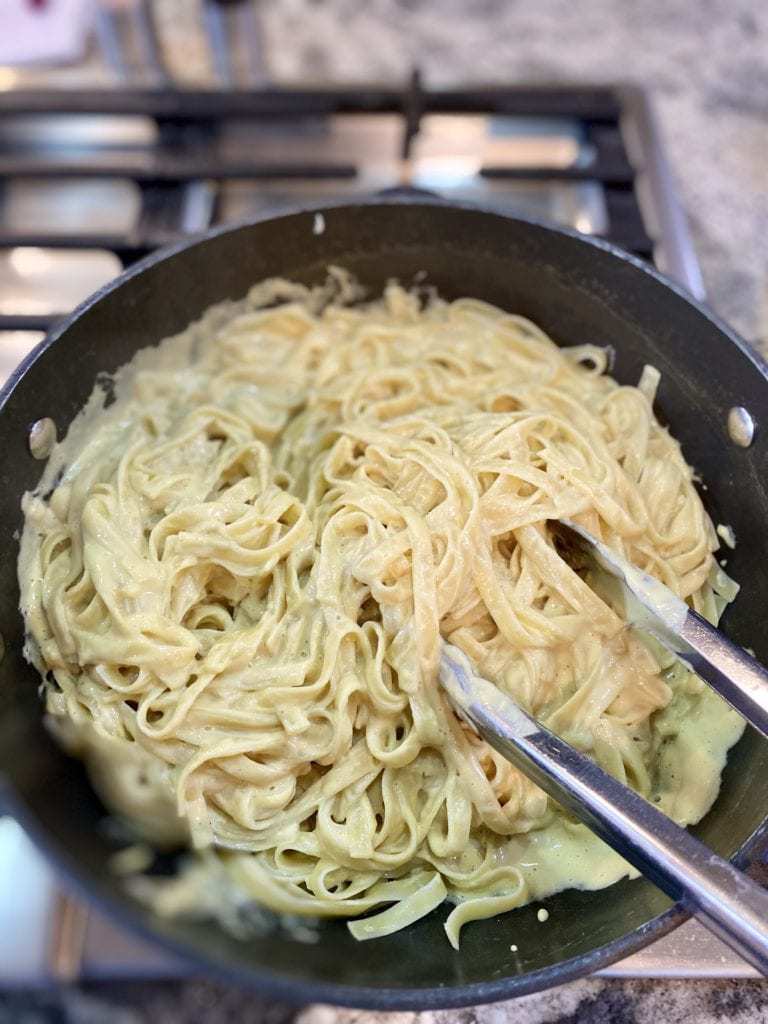 VEGAN FETTUCCINE ALFREDO IS SO EASY TO MAKE

Once the shallot and garlic are sauteed, all it takes is adding all the other ingredients to a high-speed blender, and tada...you have mastered a creamy vegan alfredo sauce.

Next, you need to chop your parsley for the garnish. Also, I served my vegan fettuccine alfredo with Vegan Parmesan Cheese. 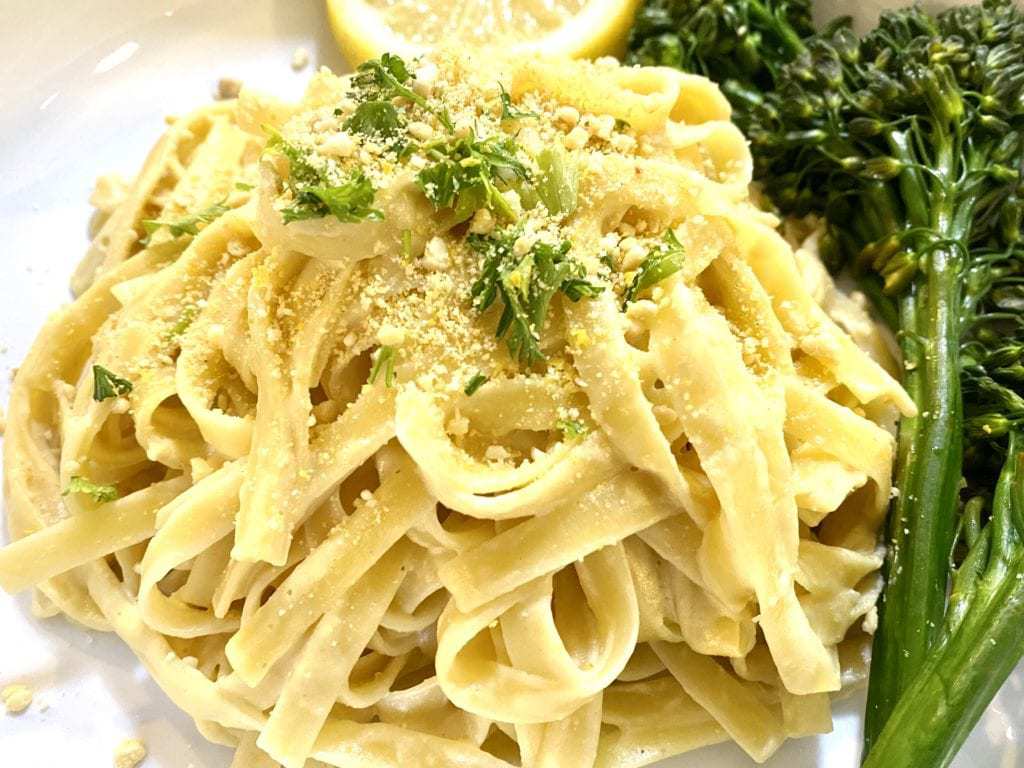 While shopping for groceries this week, I saw bunches of organic beautiful broccoli.

Without hesitation, I grabbed two bunches, not knowing at the time, it would be the perfect side dish for vegan fettuccine alfredo.

First, like asparagus, broccolini needs to be trimmed by cutting off the ends and removing the leaves.

Next, I wash the broccolini and then squeeze lemon on the top since I planned to saute it with lemon slices while my noodles cook. 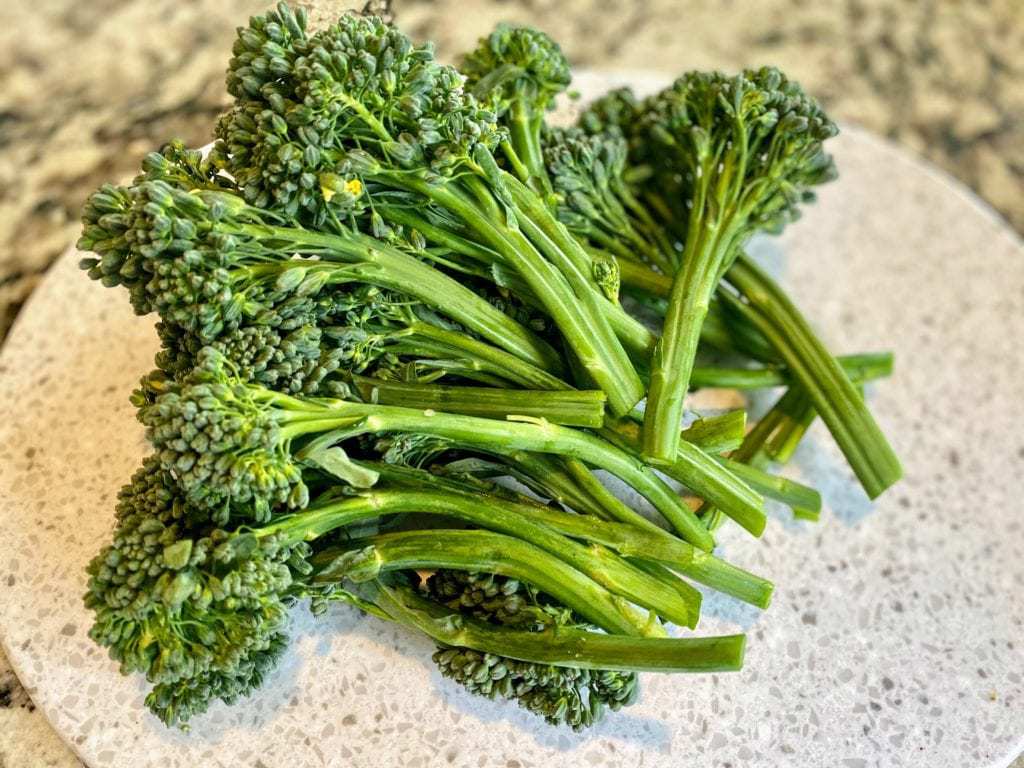 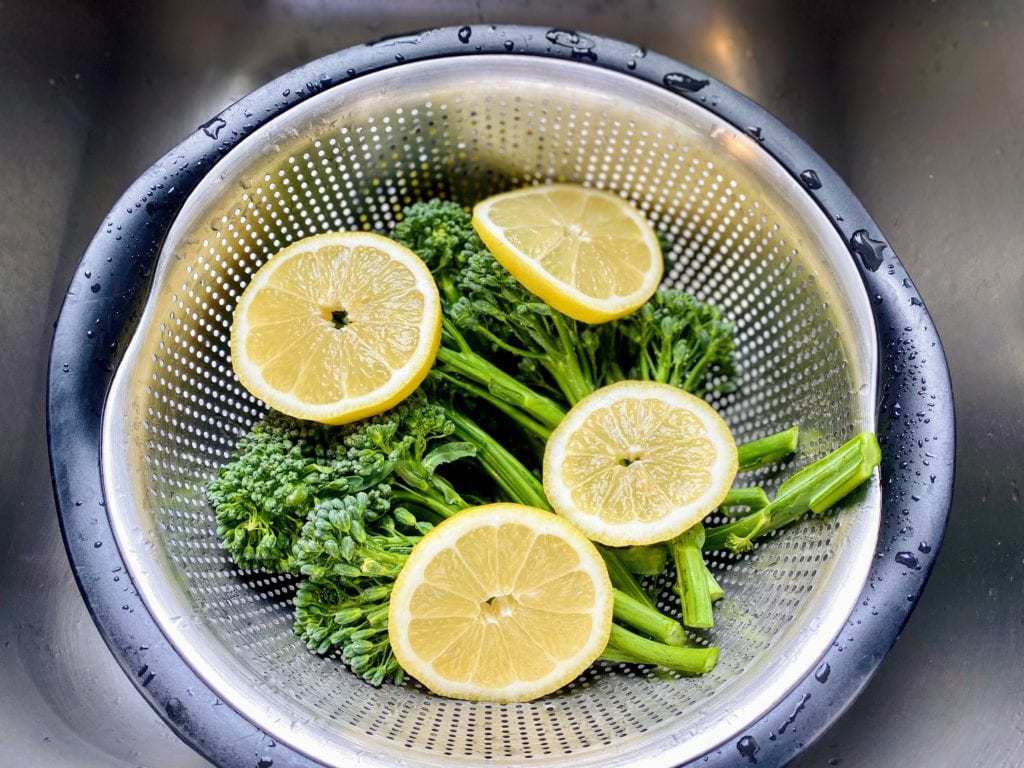 Instead of using water to saute my broccolini, I use vegetable broth instead.

Even though sauteeing in water works well, I like the vegetable broth and the lemon slices' depth of flavor.

And, sauteeing broccolini in a pan, on the stove, takes 6 minutes. So, while the noodles finish cooking, you can quickly make an easy side dish. 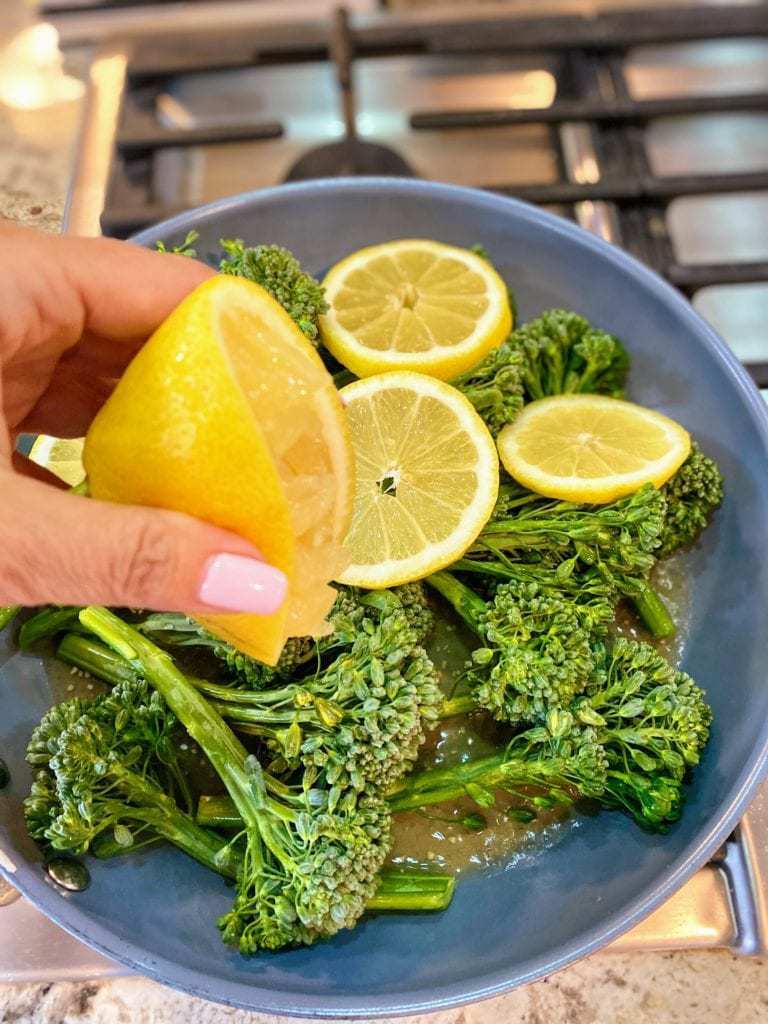 If broccolini isn't your thing, may I suggest Skinny Vegan Caesar Salad? 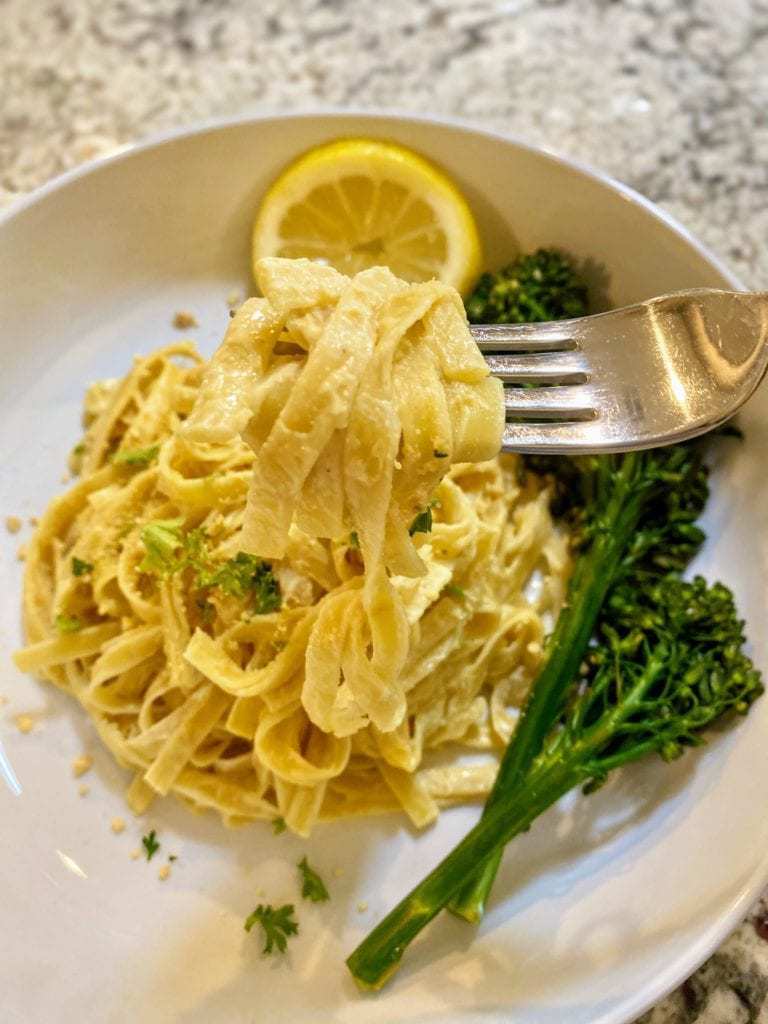 DO YOU LOVE COMFORT FOOD? LET US COMFORT YOU! 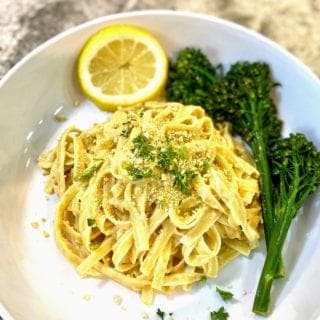