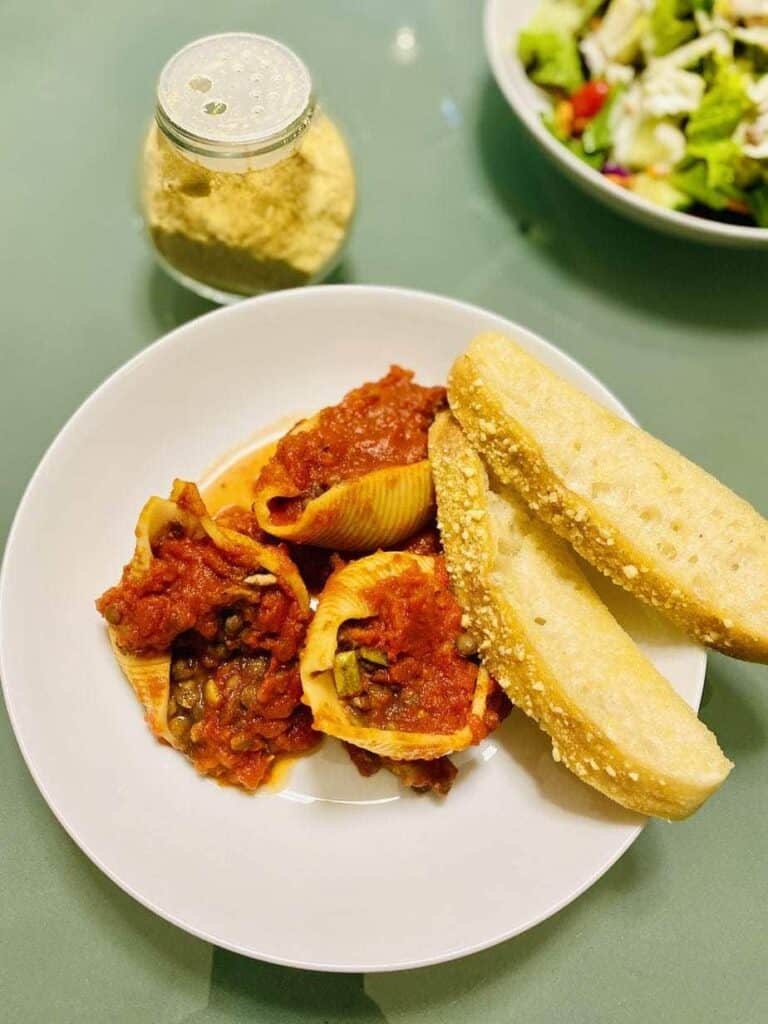 Last week, I cooked a batch of Vegan Stuffed Shells for the boys when I went to a party. When I came home, the pan was empty, and they even did the dishes. Yes, they ate every last stuffed shell in the pan and didn't leave any for me. Since they loved the stuffed shells, I decided to make vegetable stuffed shells with lentils to see if they liked them as much. Sometimes, I find persuading my kids to eat veggies, especially if I creatively present them. Veggie stuffed shells were a big hit at my house!

For this veggie stuffed shells recipe, I used a combination of lentils and veggies in a rich oil-free tomato sauce. Of course, I didn't tell the crew all the veggies I packed inside the shells. Instead, I just made the jumbo stuffed shells, served them, and waited to see their reaction.  And guess what? Again, the pan was empty!

One of the best aspects of this recipe is I prepped everything beforehand. First, I chopped all the veggies when I was making my Hungarian Mushroom Soup for the week. Then, I took a shortcut by buying Trader Joe's steamed, prepared lentils and store-bought marinara sauce.

Then I saute the veggies, added the lentils, stuffed the shells, and baked the stuffed shells for 30 minutes. 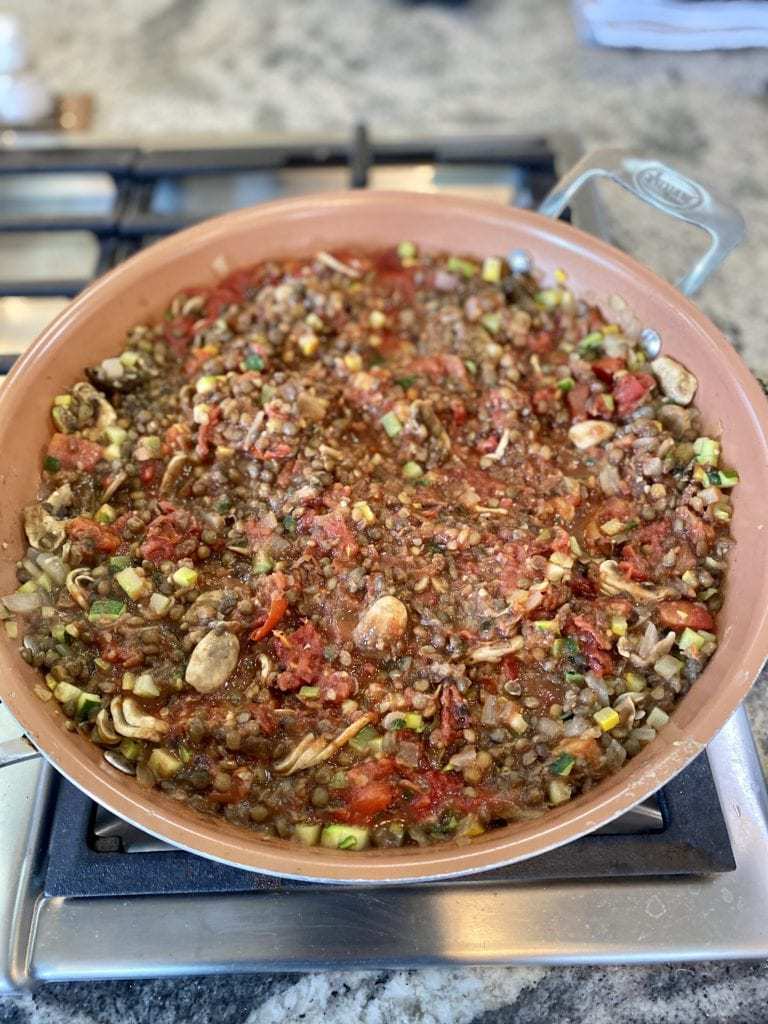 For example, the lentil and veggie filling can be used for a variety of other recipes. Since I had a leftover filling, I baked a few potatoes and filled each potato for lunches the next day.

Another idea is to use the lentil and veggie filling for layers in a Vegan Lasagna. Furthermore, the filling freezes well for other recipes.

To bake the jumbo shells for veggie stuffed shells, first cook the noodles for 9 minutes. Then, rinse the noodles in cold water, separate them, and dry them before filling.

The noodles, however, may feel firm and a little undercooked. But, don't worry, the noodles finish cooking in the oven, so don't worry about undercooked pasta. 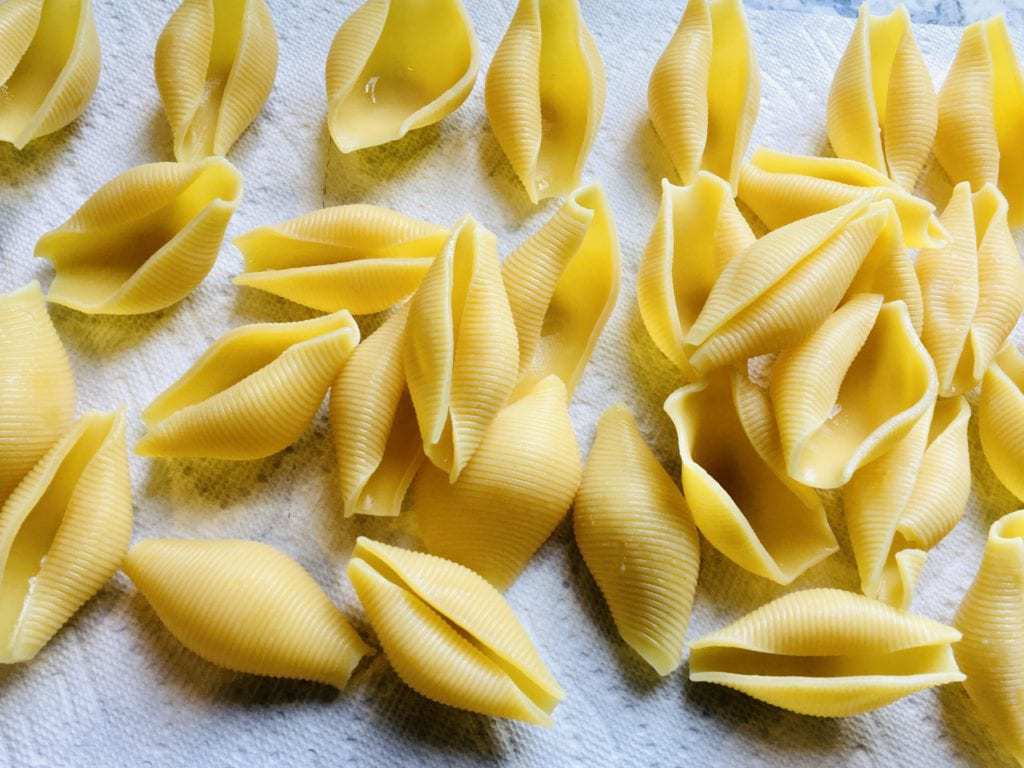 Instead of oil, pour some pasta sauce into the bottom of my 9x13 inch glass pan to prevent sticking.

Easy stuffed shells; use a spoon and your thumb to fill the jumbo shells 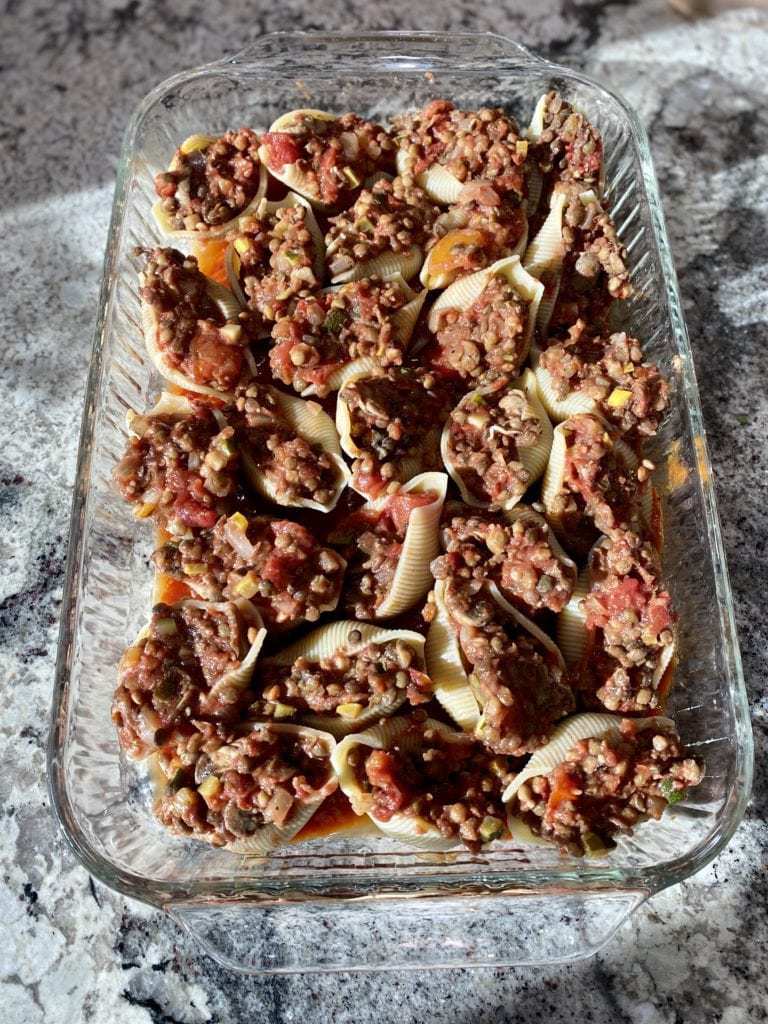 Actually, this is a fun activity for the kids to help cook. So, get everyone involved, and let the stuffing begin. If you want to add vegan cheese, feel free to do so.

I chose to skip the cheese, though, since I served the meal with Vegan Parmesan Cheese.

Let's say the rest is a piece of cake. Cover the veggie stuffed shells with the remaining pasta sauce, cover with aluminum foil, and bake for 30 minutes. 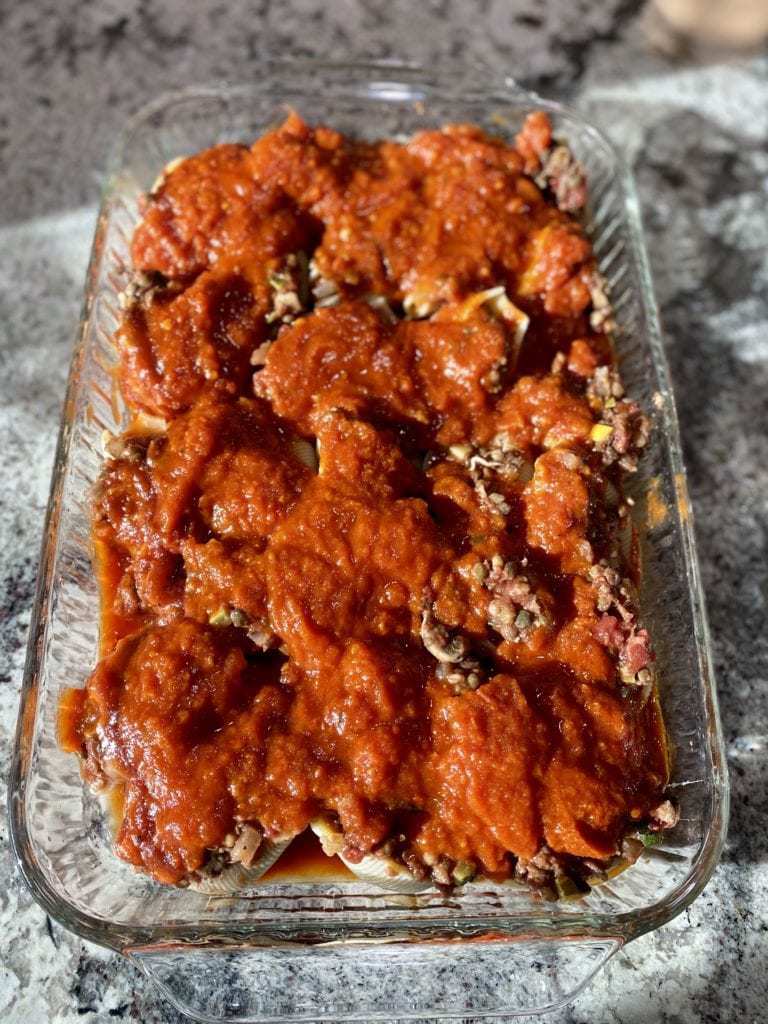 I made veggie stuffed shells, vegan garlic bread, and a simple salad with  Cashew Ranch Dressing to feed my hungry bunch. I served Vegan Parmesan Cheese, as well.

Let's say the boys didn't know the difference between the Vegan Stuffed Shells Recipe and the vegetable stuffed shells recipe. Did I trick them? Kind of, but my mom used to hide veggie in my food when I was little, so I guess it's okay. 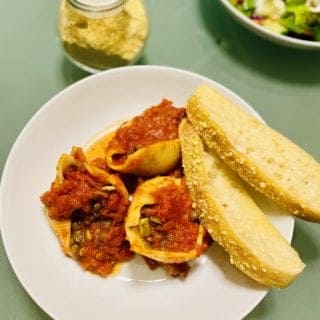 PREPARING THE SHELLS FOR BAKING

If you have extra filling it can be frozen. The filling can also be made in advance, and you can stuff the shells when preparing the meal.