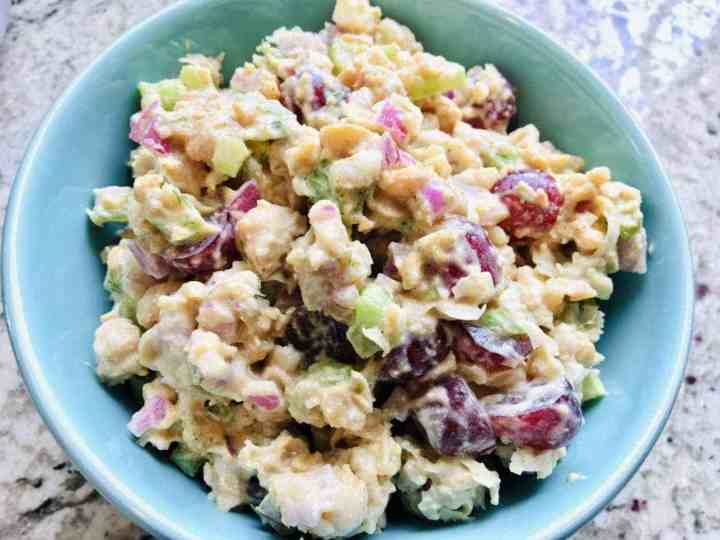 When I was a kid, my mom took my sister and me to a roadside fruit stand that served the most incredible chicken salad sandwiches I’ve ever had. In fact, I remember the crunch of the celery and the bright red grapes between the thick slices of sourdough bread. Although I would never even think of eating a chicken salad sandwich today, I figured I could make two different versions of vegan chicken salad, 1. Chickpea Chicken Salad 2. Chik’n Salad that would bring back those comfort food memories.

As I said before, my boys are fans of alternative meats. So, as I began testing out vegan chicken salad recipe, I figured I would attempt two versions. Similar to my Vegan Chickpea Salad Stuffed Tomato and my Vegan Curry Chickpea Sandwich Spread, I made a chickpea version of vegan chicken salad and another version using Gardein Grilling Chicken Strips.

Even though I am not an alternative meat fan, I was curious to see what would happen when I made two versions of the same vegan chicken salad. Despite wanting to tell my family about my taste test, I kept my experiment a secret, and the results were interesting.

Recently, I made a Skinny Vegan Waldorf Salad, which was a hit with my friends and family. For that reason, I used the same dressing. Likewise, I used red grapes consistent with my childhood version of chicken salad I loved as a kid.

First, I used my food processor to pulse the chickpeas, leaving some whole, while others were crushed. As a result, the texture for the salad was perfect for adding additional vegetables and sweet grapes. 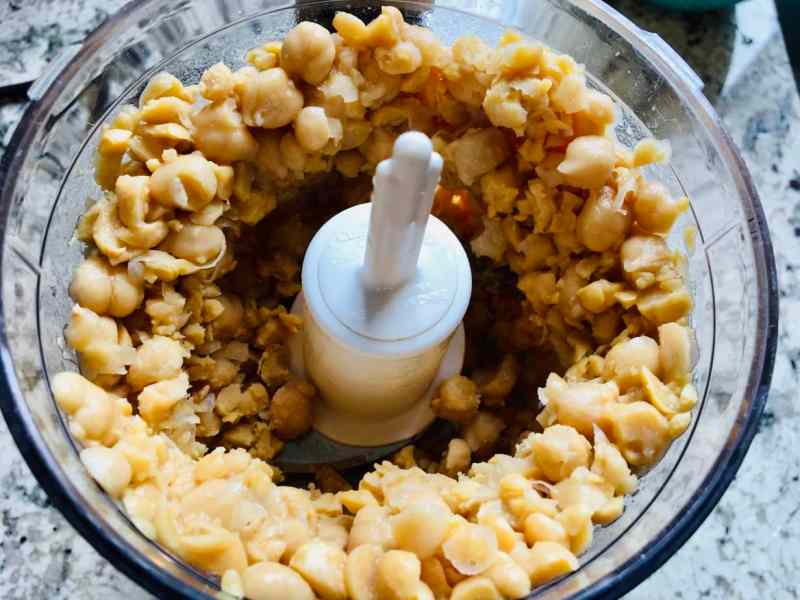 Then, I added the celery, red onion, dill, and delicious cashew-based sweet dressing. Vegan chicken salad with chickpeas, for example, is identical to a vegan “tuna” salad, for one exception, the poultry seasoning.

With that said, poultry seasoning doesn’t taste like chicken either 🙂

Though the poultry seasoning is the magic ingredient in the vegan chicken salad, the vegetables, fruits and dressing all work together. For both versions of the salad, I used celery, red grapes, red onion, and dill. 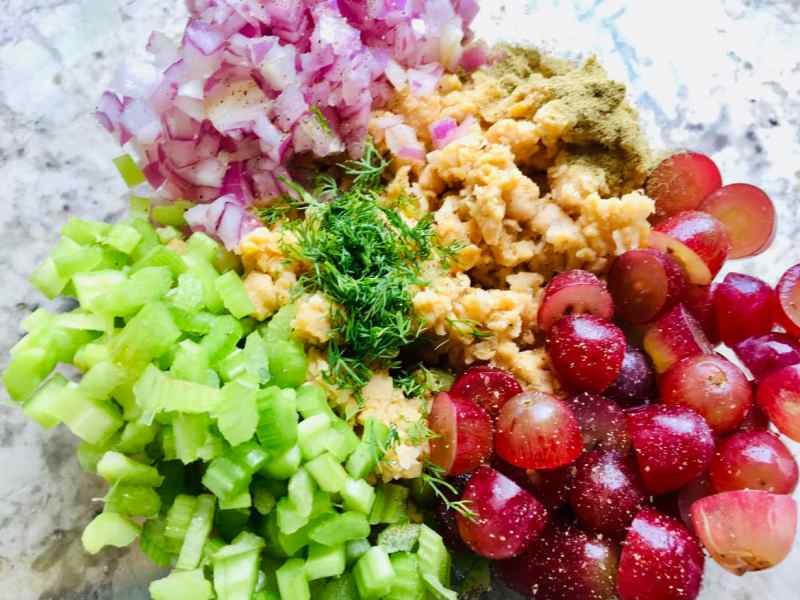 Additionally, I added the dressing and stirred everything together. At this point, you may want to dig a fork into the bowl, but if you refrigerate the vegan “chicken” salad, its flavors meld, and it simply tastes better.

I’ve never eaten or cooked Gardein Meatless Chik’n Strips, though, but they looked way too much like chicken for my taste.

So, I cooked them in a pan with vegetable broth until they appeared cooked through. Then I let them cool until I could cut them. In spite of their “real” appearance, when I tasted a little bite from the pan, I wasn’t impressed by any overwhelming taste. In fact, they didn’t have much taste at all.

After cutting the chik’n strips into bite-sized pieces, then I followed the exact recipe I used for the chickpea version of vegan chicken salad. 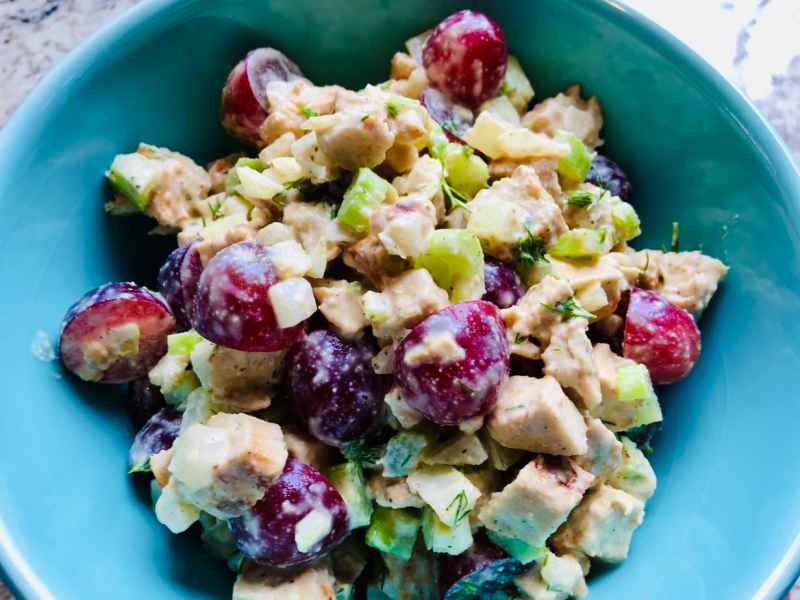 Both salads, even though different, virtually looked the same, but did they taste the same? Before I gave away my secret taste test, I made sandwiches for my victims. 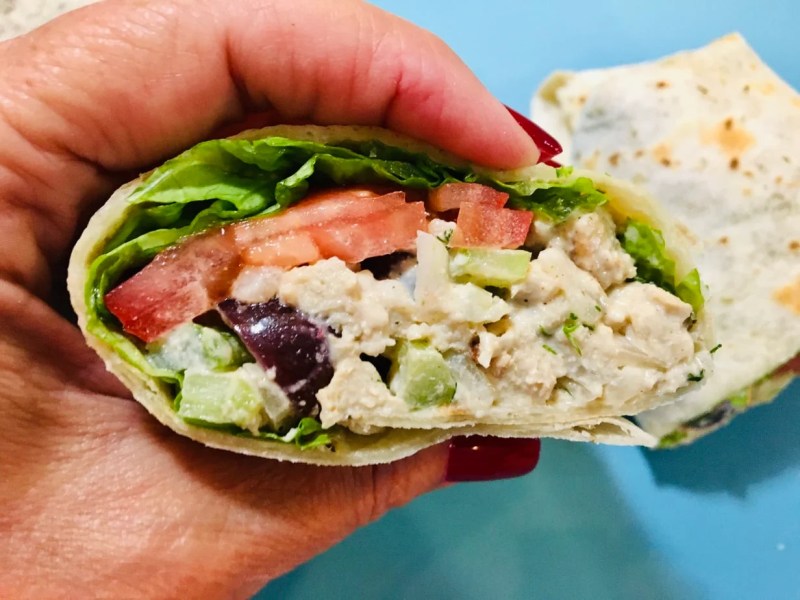 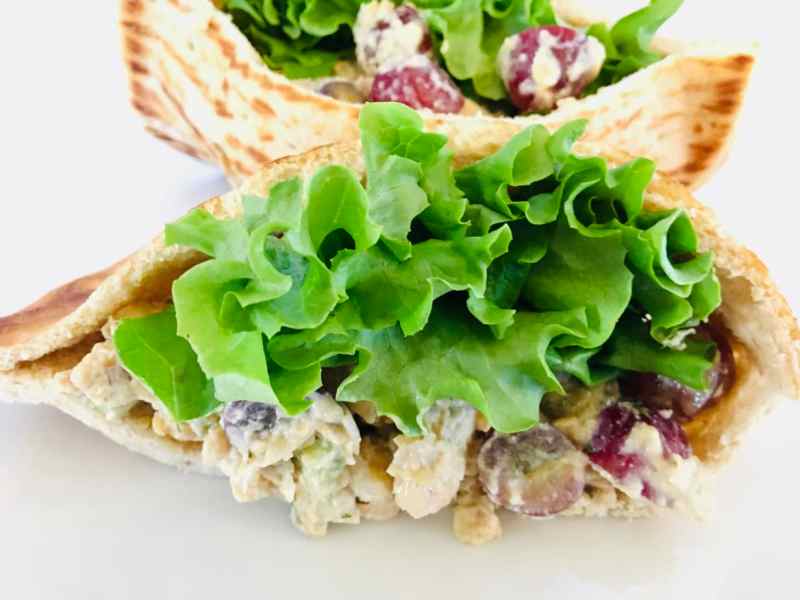 …AND THE WINNER IS…

Accordingly, the boys picked the chickpea version. In the end, though, I was surprised.

Consequently, they ate both halves of both sandwiches, and they took the leftovers to work happily the next day. Check Vegan Chicken Salad Recipe.

This vegan chicken salad is fabulous  stuffed in a sandwich, in a wrap or pita, or on top of a crunchy salad! With two different versions, you get to choose how you like it.