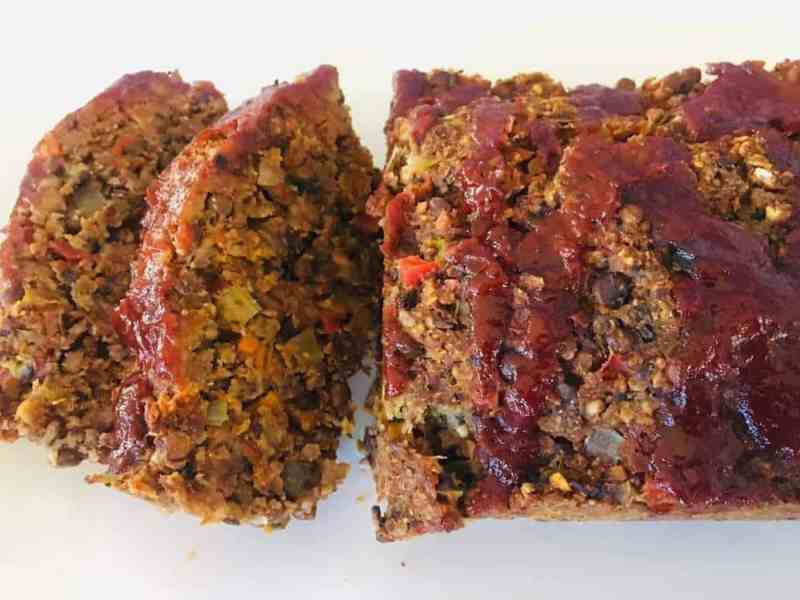 When I was little, my mom cooked the BEST meatloaf in the world. Although this was before we all became plant-based, I remember a meatloaf sandwich in my lunch box the next day. Despite everyone in the family wanting their meatloaf sandwiches covered in ketchup, mine was covered in yellow mustard. In order to bring back my magical childhood, I created this vegan meatloaf recipe. Most vegan meatloaf recipes come out dry and honestly, gross. This new recipe I’ve developed cracked the code – which I’ve coined Vegan Meatloaf with Lentils! Lentils are the secret.

Although I have been lactose intolerant all my life, I always wondered if I was also allergic to meat. In today’s world, though, becoming vegan and learning about the right nutritional needs your body needs is as easy as taking a simple test.

Did you know, there are specifically tailored tests that not only test if you are allergic to meat and other foods but if you are already vegan, you can test which nutrients you are missing in your current food plan?  In fact, it’s easy! Here is one such vegan nutritional test that can guide you better understand your own nutritional needs.

Despite being made of lentils and vegetables, vegan loaf tastes just like mom used to make. Not only does it have the texture and flavor, but this vegan meatloaf with lentils is loaded with vegetables and high fiber lentils to make it much better than mom’s version.

Mistakes I Made Making Vegan Meatloaf With Lentils:

Of course, creating vegan meatloaf took a lot of trial and error. In fact, my multiple failures always produced a dry loaf, or a wet and crumbly loaf. Also, my other loaves stuck to the pan and tasted bland. In looking back at my mistakes, my lentils were either too wet after cooking, which made my loaf soggy.

Instead, I suggest using lentils that are fully drained and not overly cooked. Or use vacuum-sealed pre-cooked lentils from the produce section. Trader Joes, for example, sells pre-cooked vacuum-sealed lentils which work perfectly for this recipe. Sometimes, a short cut like this saves a lot of time.

Looking back, I suggest sautéing the vegetables prior to make the loaf, reducing the amount of water released while cooking. Not only does this make the loaf sturdy, but it also sticks together better when removing from the pan. Furthermore, I use a silicone bread pan to prevent sticking. If you don’t have a silicone bread pan, you can use parchment paper, so the loaf lifts easily from a bread pan.

Finally, after many trials, I mastered the vegan meatloaf recipe.  First, I focused on the combination and amounts of flaxseed meal, bread crumbs, and quick oats. As simple as that sounds, it has been a struggle for me. But once I figured it out, the better my results.

Since my mom always served mashed potatoes with her meatloaf (sadly not vegan meatloaf), I decided it fitting to do the same. So, I served my Skinny Miso Vegan Mashed Potatoes on the side. As a kid, we used to dip our meatloaf in the mashed potatoes. When I watched my husband dip his vegan lentil loaf in his mashed potatoes, it brought a smile to my face.

After some thought, I realized this mixture is not only a great lentil loaf, but it can also be used to make meatballs for vegan spaghetti and meats. Or use vegan meatloaf inside red or green peppers for stuffed peppers.

If you are a former meatloaf fan from the past, try this Vegan Lentil loaf Recipe cause wow!

Looking for more ways to eat lentils? Try my Spicy Vegan Lentil Wrap with Baja Sauce or Skinny Lentil Gyro Bowl with Vegan Taziki; both are packed with lentils! Check out the Vegan Meatloaf Recipe.

Full of veggies, lentils, and savory flavors, this lentil loaf is worth every ingredient. Make it the day before and enjoy it for dinner and lunch for the week.