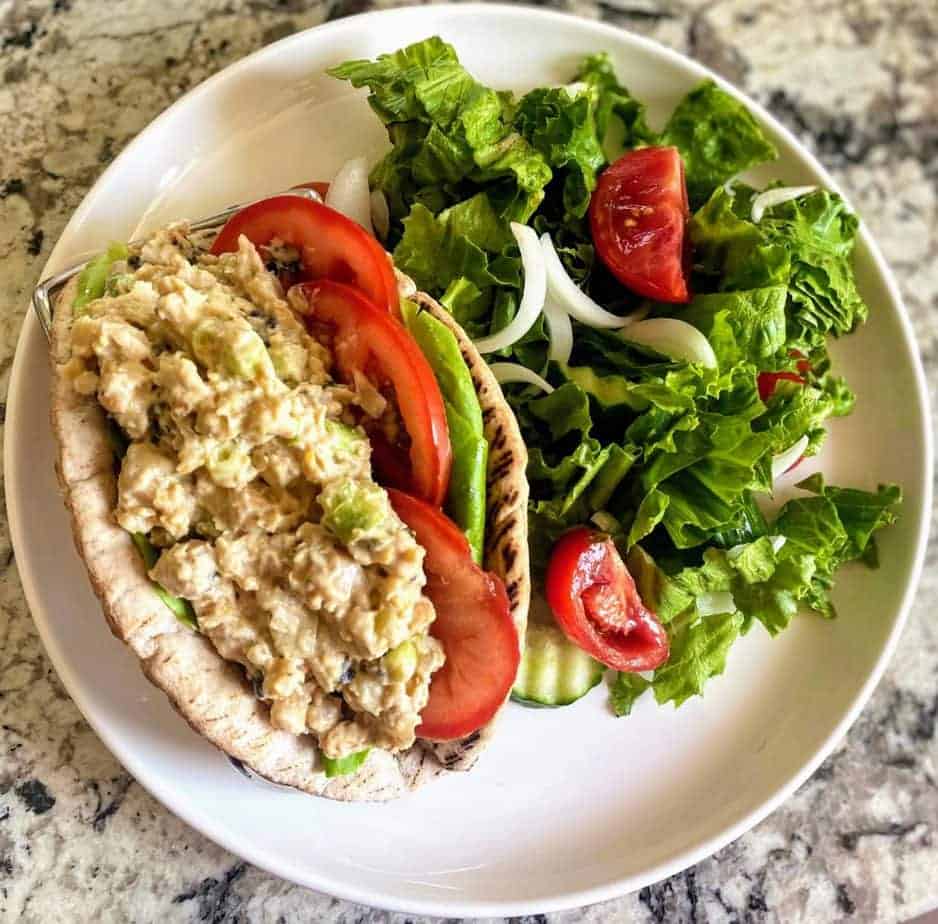 When I was looking through my old recipes, I found recipes where I used Vegenaise, which I haven't used in years. Since learning and growing as a plant-based foodie, I removed many processed foods I initially used when first transitioning. Now, making my own cashew mayo or Vegan Sour Cream has really changed my outlook on cooking. This version of my vegan chickpea tuna salad recipe is much better than the old version, as it has more healthy ingredients and no processed foods.

When I was little, my grandma used to stuff tomatoes with tuna salad. Of course, I wasn't fond of tomatoes because I was a kid. Honestly,

I think it was her way of "hiding" vegetables in our food (she wasn't very good at it, I might add). So my sister and I scooped the tuna salad from the tomato and left that beautiful red tomato with leftover tuna sitting on the plate. Luckily, I grew out of my dislike of tomatoes. Today, I eat tomatoes at least once a day.

But don't forget about a chickpea tuna sandwich. 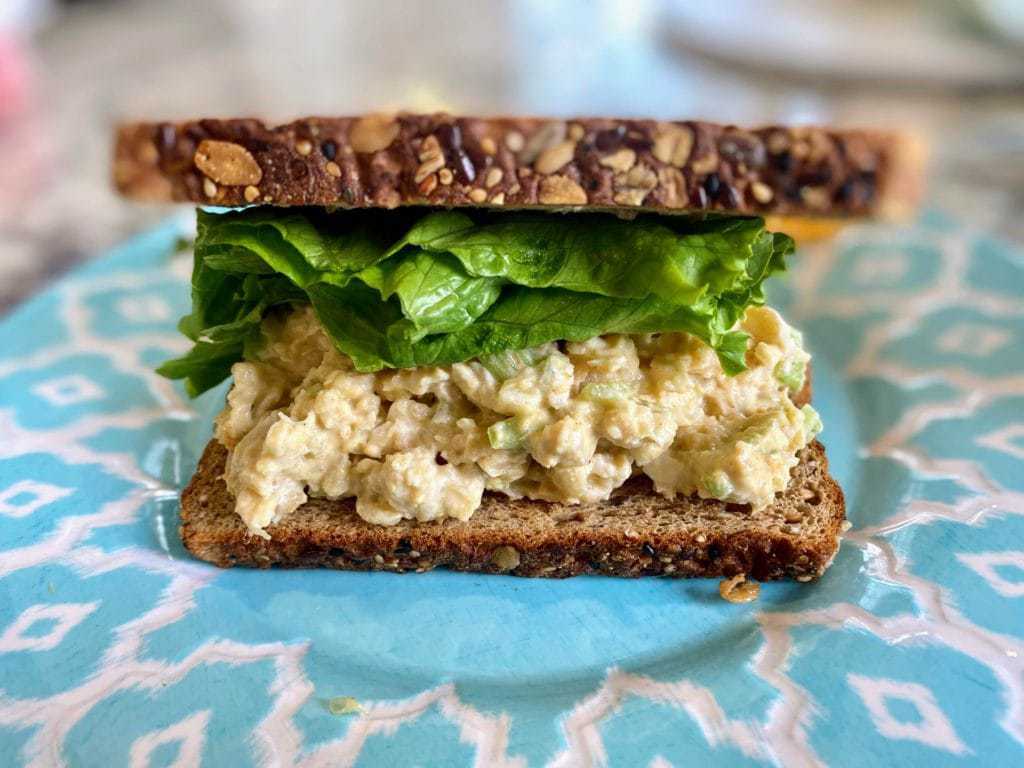 IT'S ALL ABOUT THE TEXTURE OF THE CHICKPEAS

I use my food processor on pulse mode to mash all the chickpeas to get the right texture. Although some chickpeas can remain in halves, you want most mashed completely. Do not, though, over pulse and end up with chickpea paste. I learned another little trick to pulse one can of chickpeas, not to overcrowd the food processor. 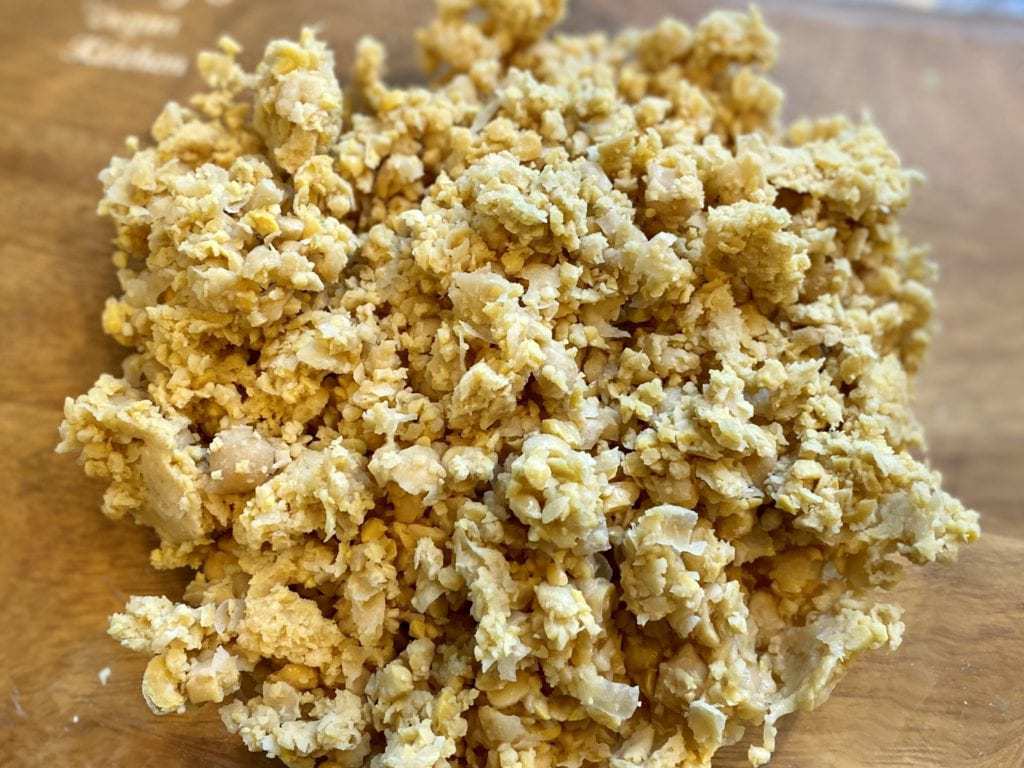 WHY MAKE YOUR OWN MAYO?

Despite the convenience of buying store-bought vegan mayo, the homemade version not only tastes better, it just is better! For example, I buy raw cashews in bulk, if I need them or not. In fact, I have been known to search my local Sprouts and other organic market ads, and when they are on sale, I buy an obscene amount.

There are, though, tofu mayo recipes out there, but I prefer to use cashews. ½ cup of raw cashews, make an entire batch of vegan mayo, so if you are concerned about fat content, the ½ cup of nuts goes a LONG way.

And, making cashew mayo is simple. Who doesn't like simple? If you own a high-speed blender (my favorite is the Nutribullet), making mayo takes 5 minutes. 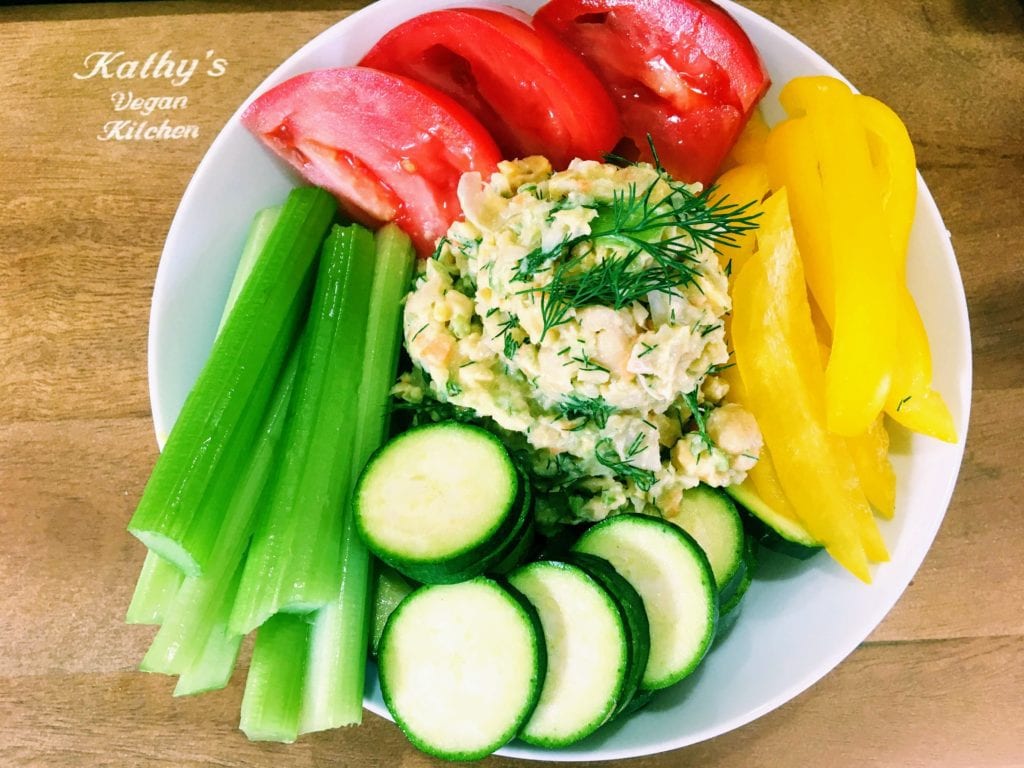 And if you are new to plant-based eating, it just might help you along the way. I use Dulse and Old Bay Seasoning to get the slightest "sea-like" flavor, or any creole seasoning will do.

Dulse is a variety of seaweed that resembles leafy red lettuce when fresh. Its flavor will definitely remind you of the ocean — its minerality makes it a great stand-in for salt.

The benefits of Dulse include, for example, high levels of protein and fiber. Dulse is a nutrient-rich red alga that has become increasingly popular in health food circles due to its numerous nutrition properties. As a result, more and more experts advise people to implement sea greens into their diets, including dulse.

Here are some great ways to incorporate dulse: 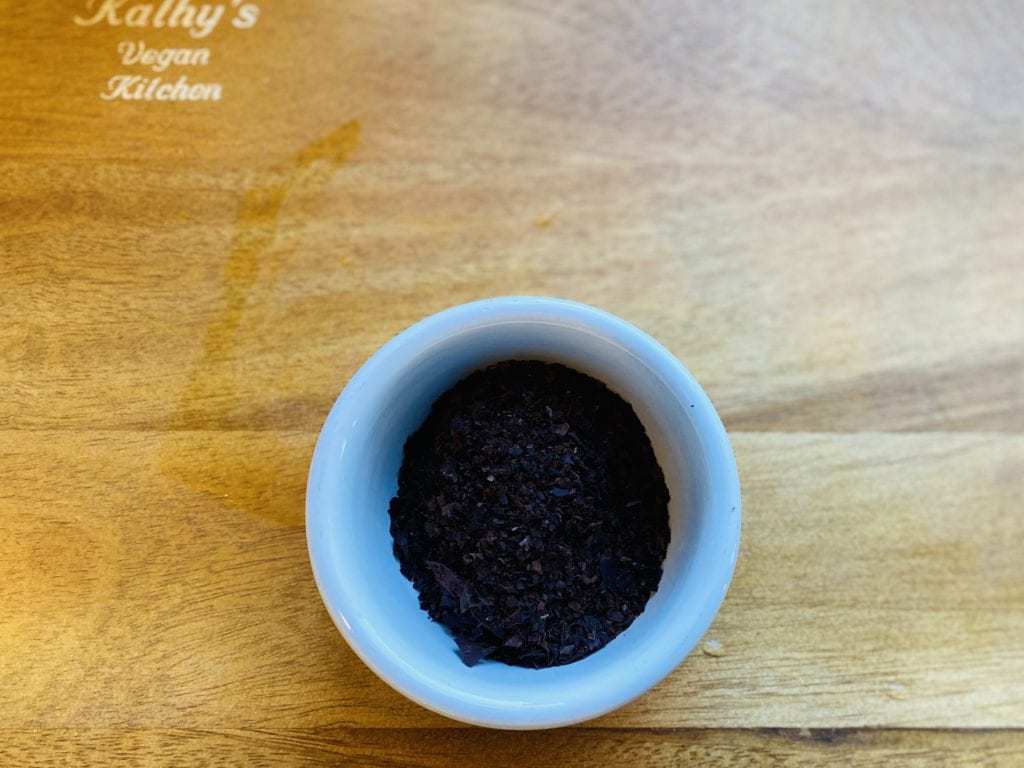 WHAT ELSE CAN YOU ADD TO YOUR CHICKPEA TUNA SALAD?

You can also add any vegetables you want to my vegan chickpea tuna salad recipe. Celery, and yellow onion, for example, are a must. But feel free to add any chopped vegetables you enjoy, like red peppers, or many people add capers as well. 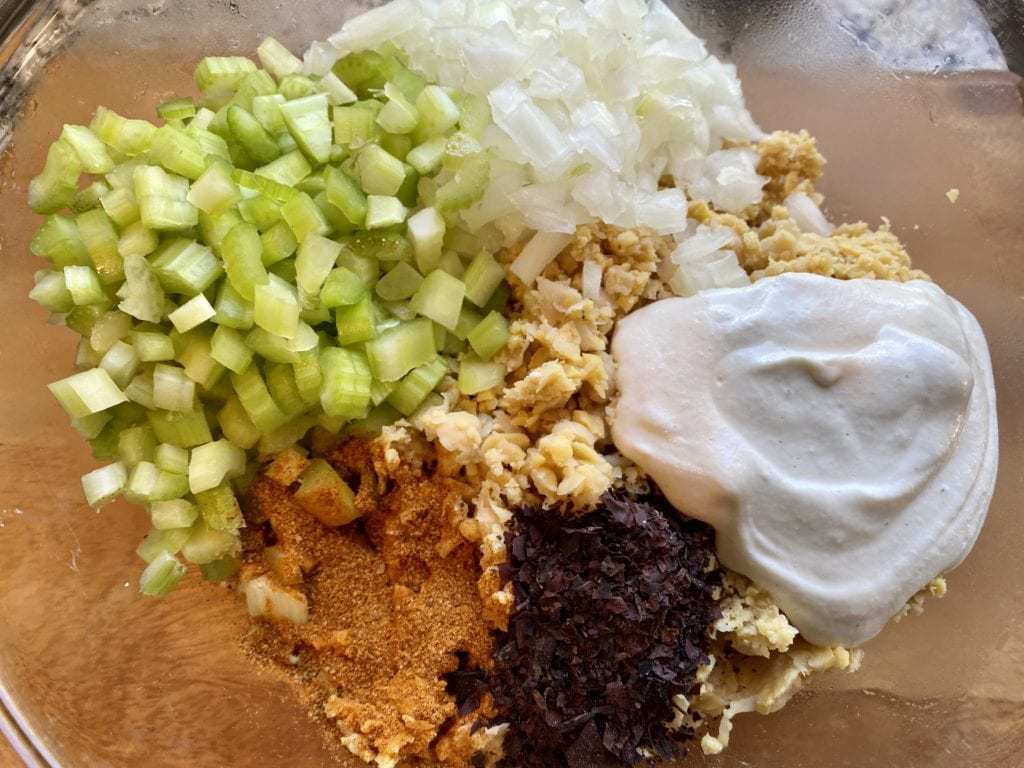 For instance, I make a Vegan Curry Chickpea Sandwich Spread recipe seasoned with curry powder. You can also add fresh dill to give it a more Mediterranean flair or spice it up with red pepper flakes and chili powder. The choice is yours.

SERVE IT UP IN DIFFERENT WAYS

In an attempt to avoid bread, I often serve chickpea tuna salad inside a carved-out tomato. All you need is a large, hothouse tomato and a paring knife. 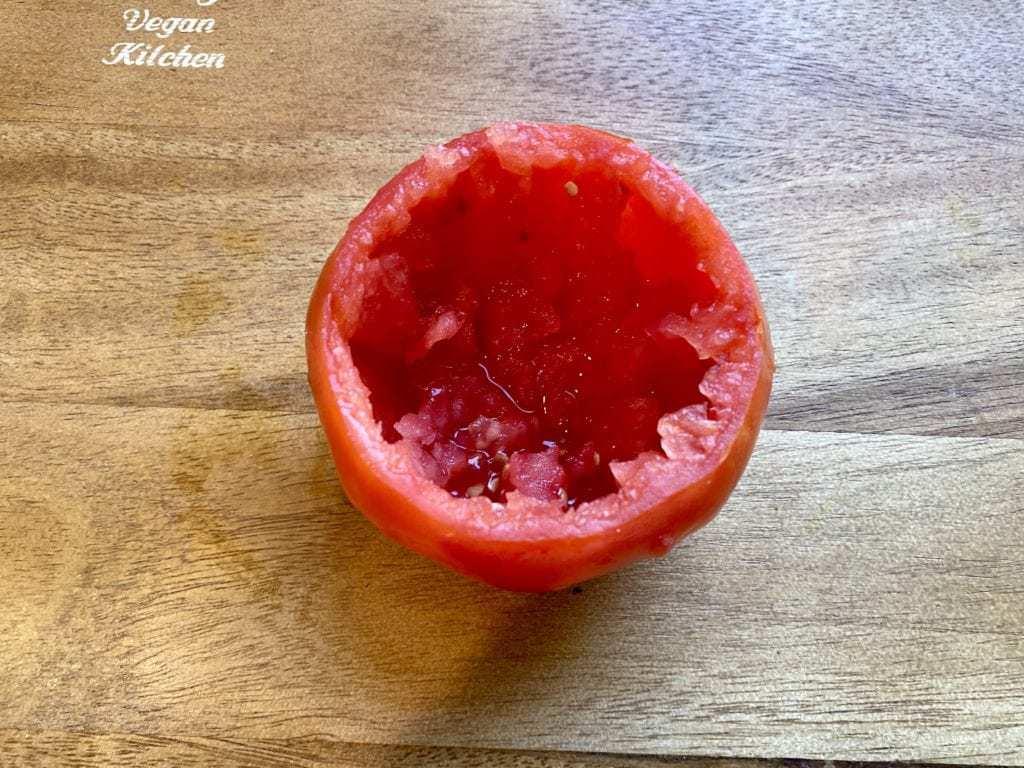 Then, gently cut the top off the tomato, and about ¼ inch from the outside of the tomato, carve around the inside. Next, use a spoon to scoop out any excess tomato flesh, and add heaping spoonfuls of chickpea tuna salad. 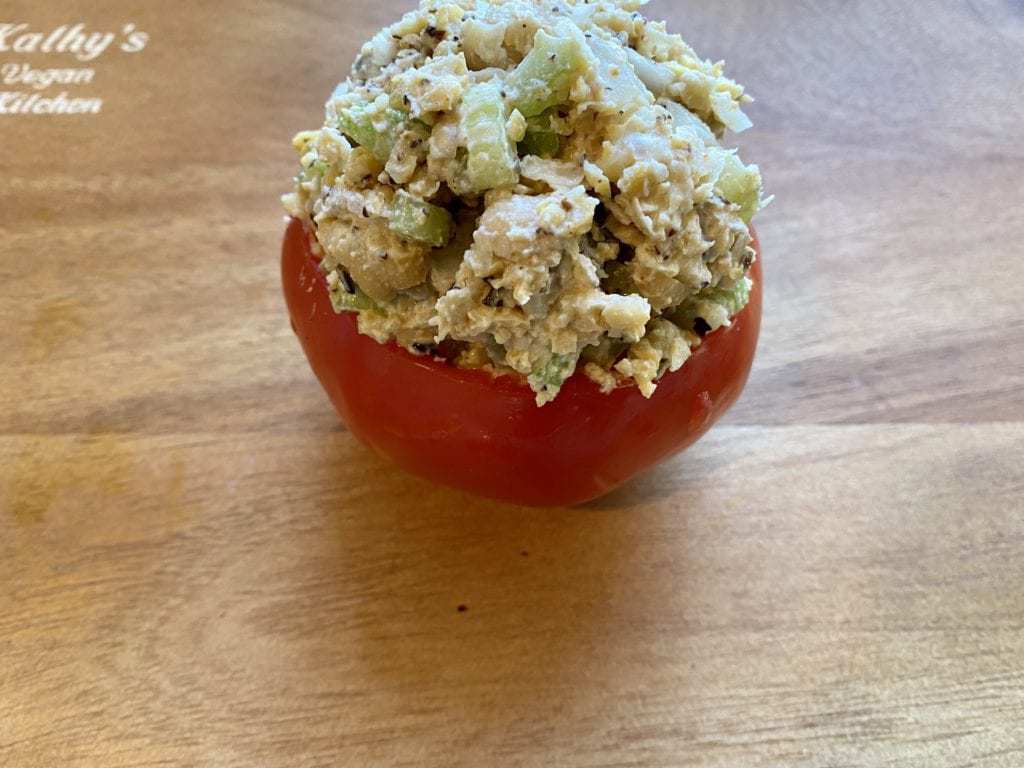 Or, serve chickpea tunas salad in a pita with your favorite veggies. 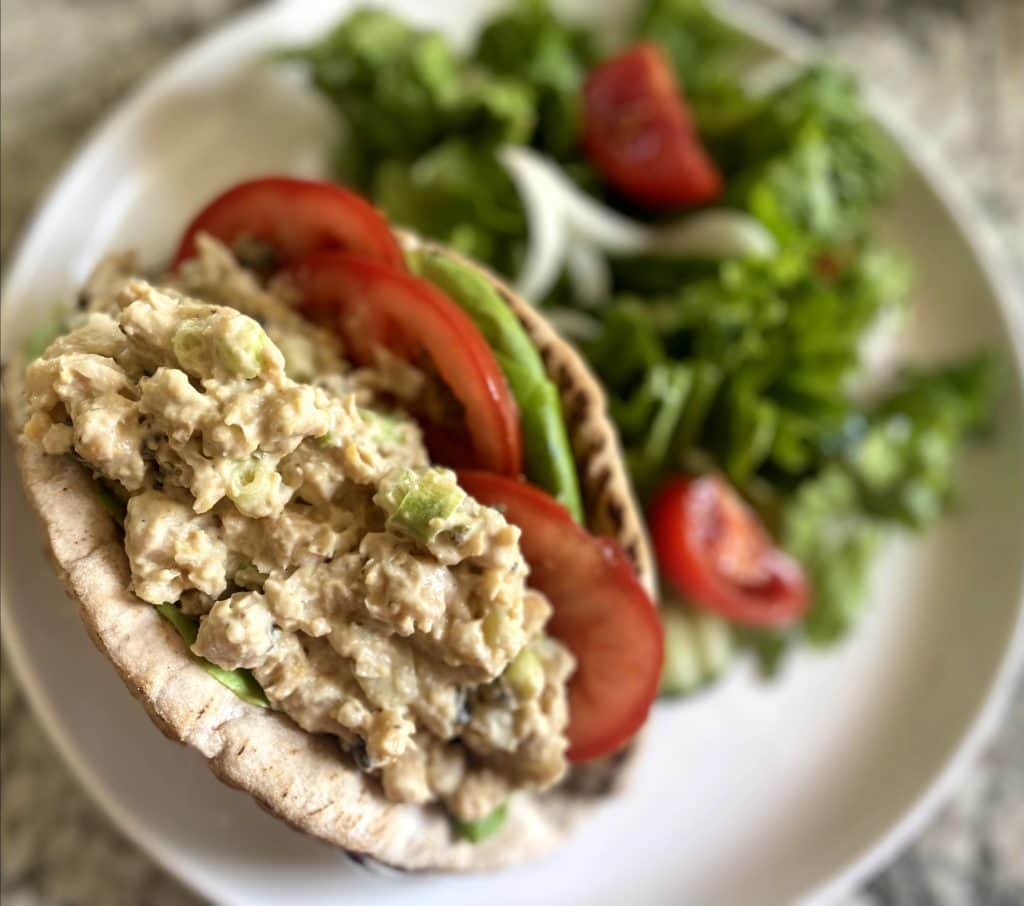 If filled tomatoes aren't your thing, then serve it with greens in a bowl, or eat it with rice crackers. Any way you choose to eat this fabulous chickpea tuna salad, give it a try; you won't be disappointed. Not only is chickpea tuna salad a great meal to take to work or eat at home, but you can also make it the day before and grab it on the way out the door. 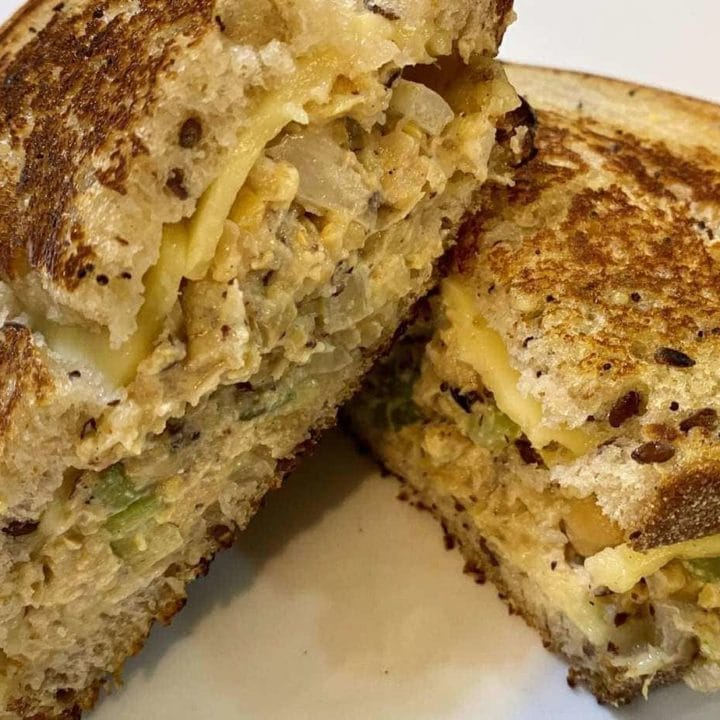 I made my son a chickpea tuna salad melt on whole-grain bread with Havarti Follow Your Heart cheese slices. And he wanted a second sandwich. Kid tested; mother approved! 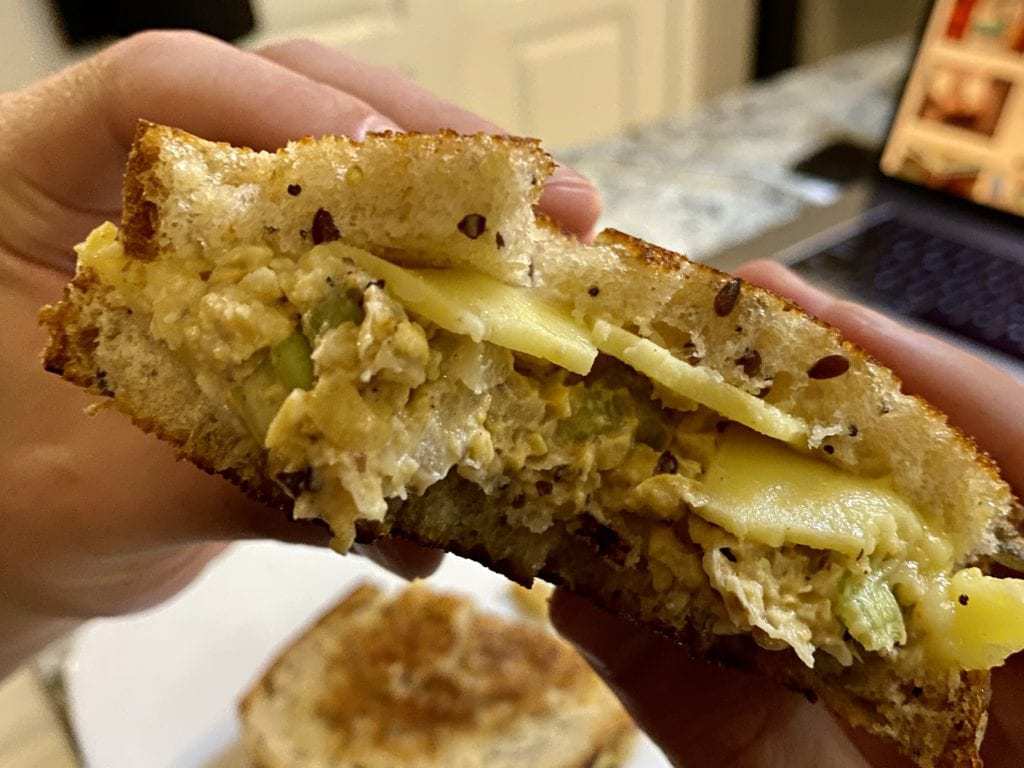 Any way you eat it, chickpea tuna salad never disappoints.

What can I put on chickpea salad?

How does chickpea tuna taste?

How to make a chickpea tuna salad sandwich

Do you love vegan sandwiches? Then, give these sandwich recipes a try.

Vegan Cashew Mayo will last 7 days refrigerated. If taking this salad to work, keep the salad and the tomato separate until you eat it; it stays together better that way. Tip: Remember, keep your tomatoes on the counter; don't put them in the refrigerator. They last longer at room temperature.