When my husband joined me on this plant-based journey, he asked me to recreate his favorite recipes but healthy and vegan. So, today he was craving tuna pasta salad. Since he loves my chickpea tuna salad and vegan lobster roll, I created vegan tuna pasta salad combining his two favorites and adding whole-grain noodles. He loved this vegan tuna pasta salad recipe so much that he wants to take the leftovers for lunch tomorrow.

Often, people ask why vegans cook vegan foods that taste like meals we used to eat before transitioning to a plant-based diet. This is how I convinced my family to start eating healthier while saving animals and enjoying the foods they always love.

Vegan tuna pasta salad doesn't taste like tuna! Instead, it tastes like hearts of palm, chickpeas, and vibrant vegetables with a vegan tangy and savory dressing.

How to Make the Salad

Begin by placing the chickpeas and hearts of palm in a large food processor bowl equipped with a large chopping blade.

Pulse; do not blend or over-chop. Instead, the goal is to chop roughly, resulting in a chunky mixture.

In the meantime, cook the macaroni.

Then, add the mustard, lemon, and only half of the cashew mayo to make the mock tuna for the vegan tuna pasta salad. And stir to combine. Set aside.

Transfer the cooked noodles to a colander and drain the noodles. Rinse the noodles in cold water to stop the cooking process.

Make sure to move the noodles around in the colander and run cold water through all the noodles to cool them before adding them to the vegan tuna salad.

Then, add salt and pepper to taste and additional parsley for color.

What is vegan tuna made of?

Currently, many vegan tuna meat substitutes are made from soy protein, but it tastes just like tuna. However, I prefer using whole foods like chickpeas and hearts of palm.

What is vegan tuna called?

"Tuno" is being sold as "vegetarian fishless tuna," which tastes similar to regular tinned tuna but is made with water, soy flour, yeast extract, maltodextrin, and salt, instead of fish.

What are other flavors to add to vegan tuna pasta salad?

If you like spicy, consider adding a little Sriracha, red chili flakes, or sweet chili sauce. It adds a little heat if you like it, a little spicy.

Before the end of summer, try vegan tuna pasta salad loaded with veggies. In under 20 minutes, prepare lunch for the week, or a quick weeknight dinner.

If you love vegan tuna pasta salad, give us a 5-star-rating and comment below. We would love to hear from you! 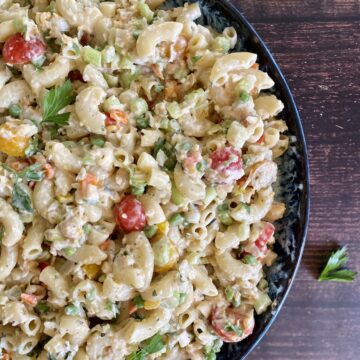