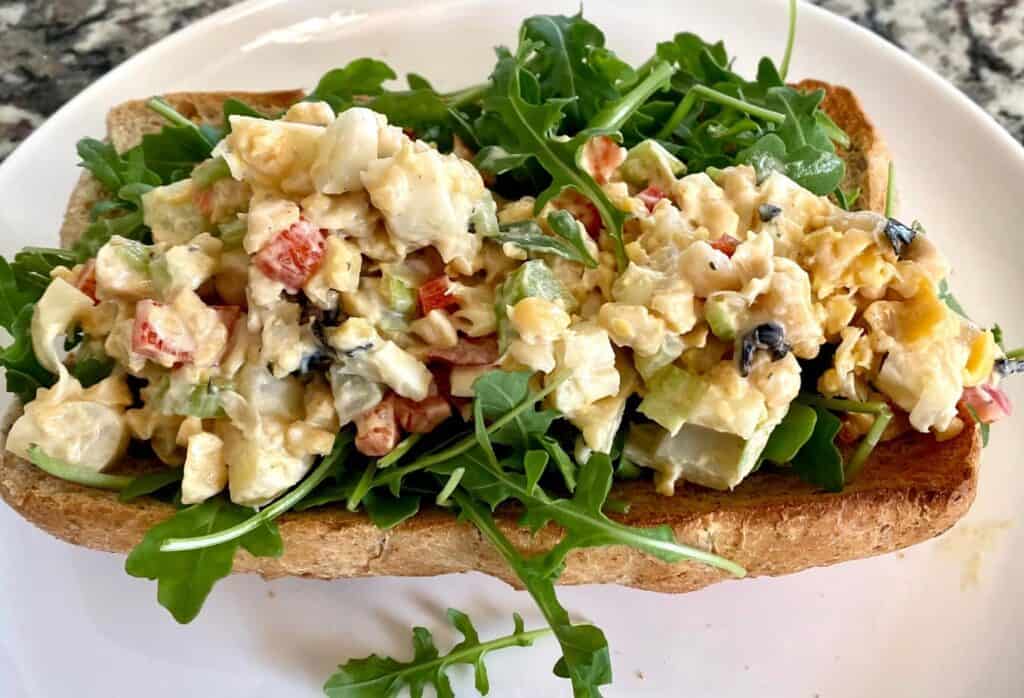 Since convincing my family to transition to a plant-based diet, I often get requests for food my family loved before being vegan. For instance, my husband asked if I knew how to make a vegan lobster roll. Without hesitation, I said, "sure, I can do that." My mom, who lives in Michigan, uses a vegan meal service that delivers to her house called Aratham, and every Friday, I order her meals online. Last week, she ordered a vegan lobster roll. Although I didn't have a recipe, I used Aratham's idea to make my vegan lobster roll recipe.

Often, my ideas for recipes come from vegan restaurants I frequent or veganizing a recipe my mom or grandma used to make. Because I live in Arizona and my mom is less than computer literate, I asked her about the lobster roll she ordered and to tell me what she liked about it. Then, using my Chickpea Tuna Salad Recipe as a base, I created my version of a lobster roll, which is now a "keeper," according to my husband.

But, first, I needed to make vegan lobster. Unfortunately, vegan lobster doesn't exist, but the heart of palm, which is similar in texture and color, works perfectly as a vegan lobster version.

Heart of palm is a white vegetable obtained from the center of specific palm tree varieties. It's prized for its culinary versatility.

When harvested, young trees are felled and debarked to expose their edible, white inner core, then cut into lengths for further processing.

While most commonly added to salads, the heart of palm can also be eaten on its own or used as a vegan meat replacement. It has a slight crunch similar to white asparagus, though its flavor is comparable to artichoke hearts.

Heart of palm boasts a remarkably low-fat content and provides several minerals, such as potassium, iron, copper, phosphorus, and zinc.

Due to its reasonably low carb and fat levels, this veggie has very few calories. Additionally, it offers small amounts of several other nutrients, including iron, calcium, magnesium, and folate. 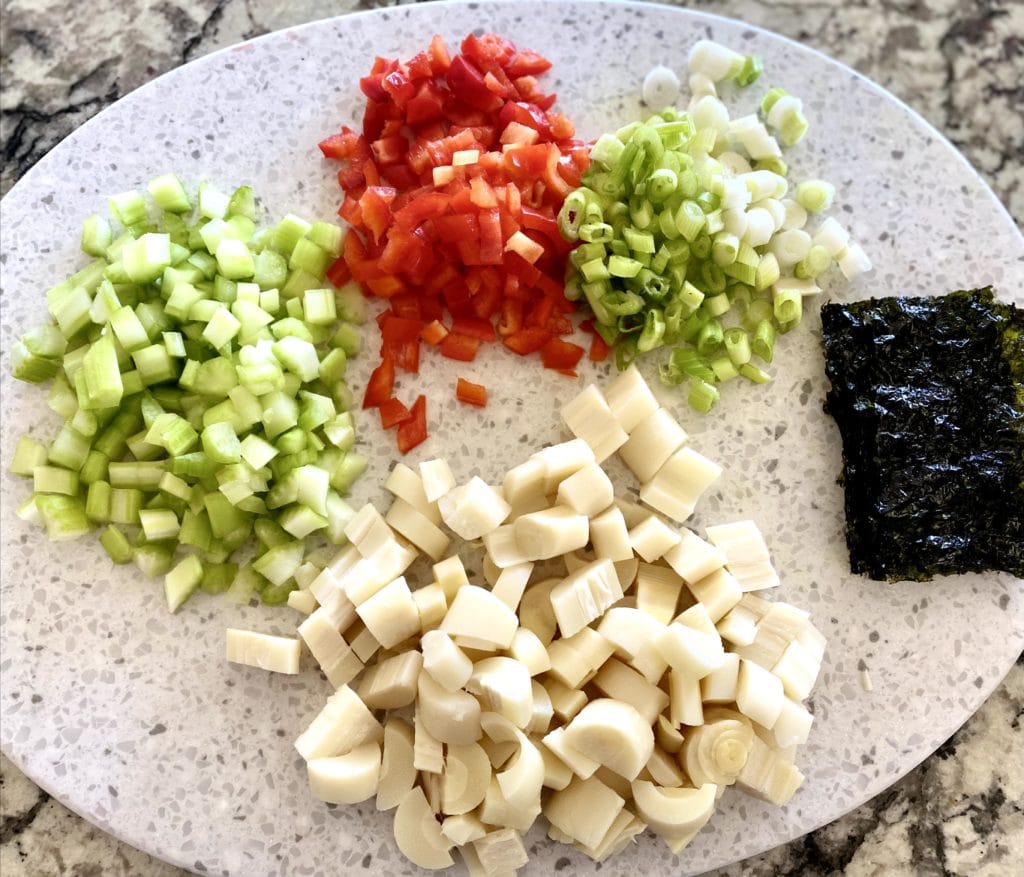 The key to making a lobster salad is a combination of textures to make it delicious and inviting.

To begin, cut the heart of palm into bite-sized pieces and set them aside. Then, pulse the chickpeas in a food processor. Avoid over-pulsing the chickpeas; instead, grind while leaving some whole or cut in halves, as shown below. 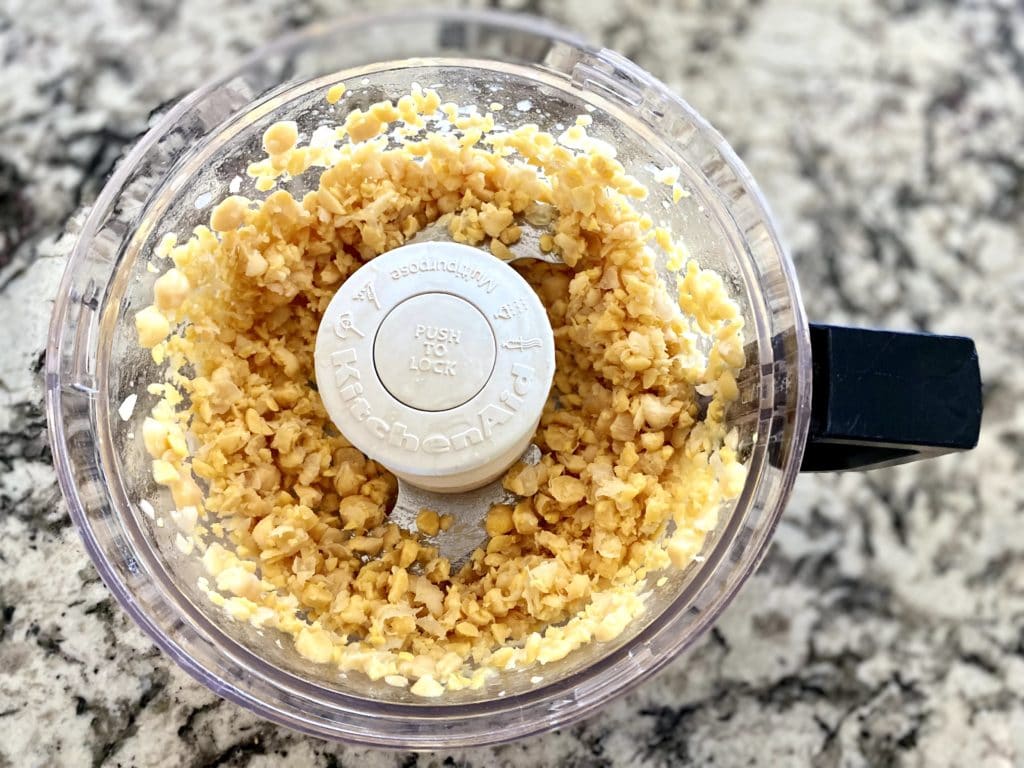 Next, combine the ingredients in a large bowl.

Also, I suggest making the lobster roll salad in advance to cool in the refrigerator, which helps enhance the flavors. 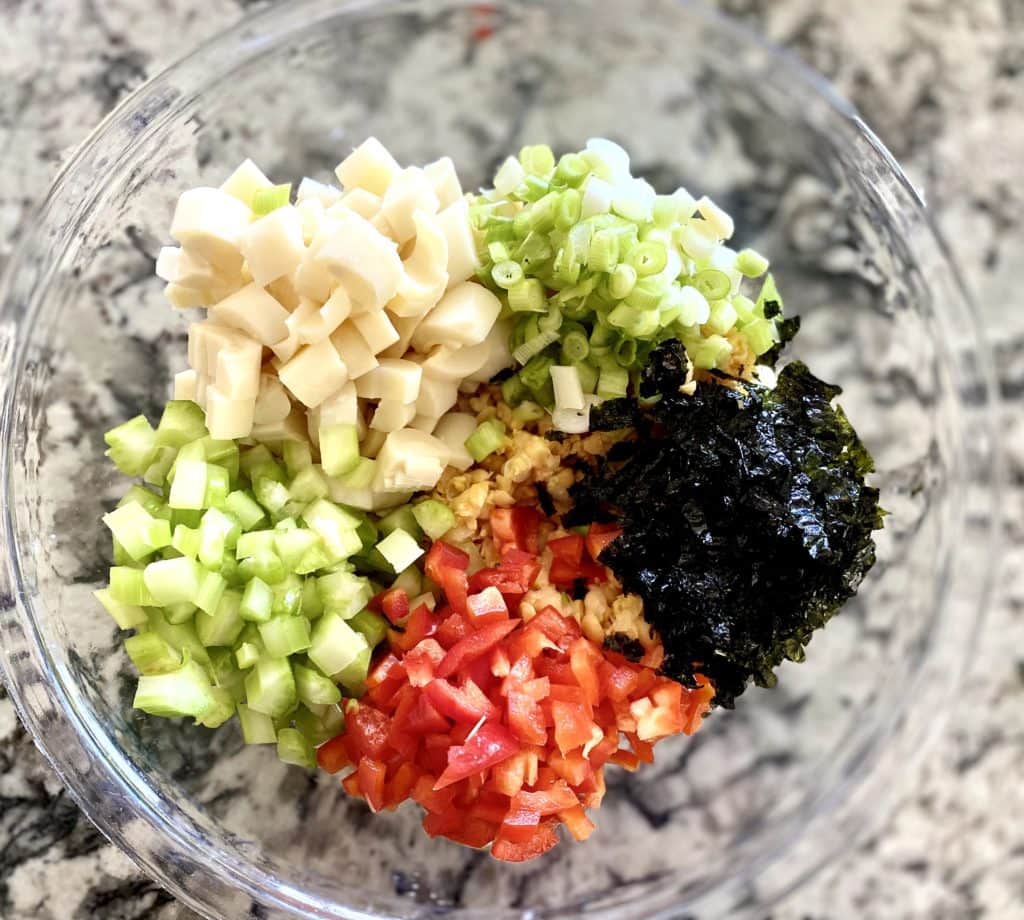 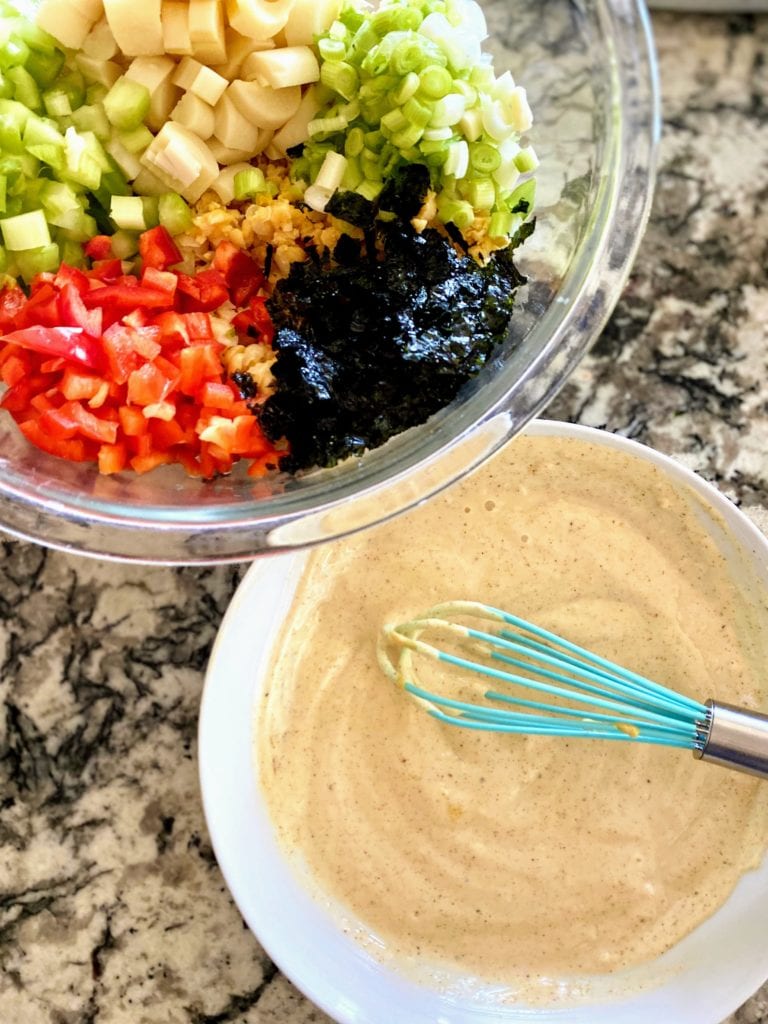 The lobster sauce always makes or breaks the vegan lobster roll recipe. I love sauce, and sometimes, it takes some trial and error to get it right.

Once combined, whisk the ingredients, pour over the vegan lobster roll recipe ingredients, and stir to coat. Refrigerate for about an hour before serving. 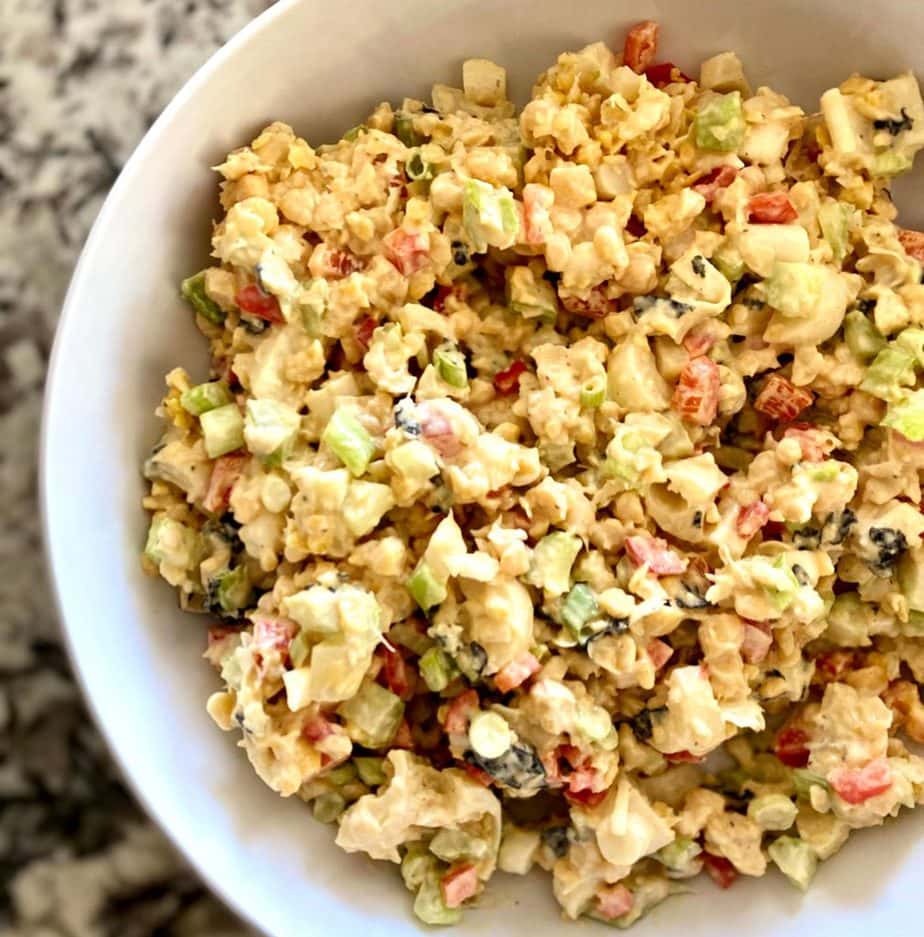 How to make lobster rolls 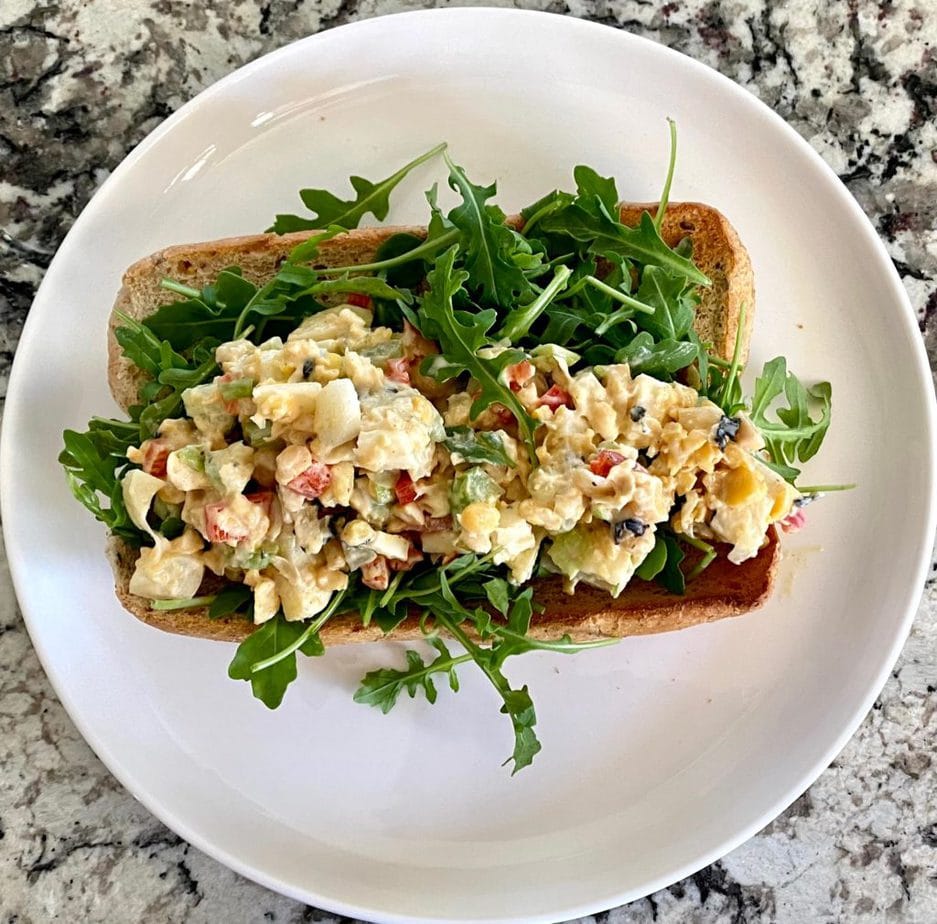 To make a vegan lobster roll, broil or toast your Hoagie roll. To find a whole-grain bun or bread without oil, read the ingredients. Then, shop in the fresh bakery section rather than the bread aisle.

Where to buy fresh heart of palm? 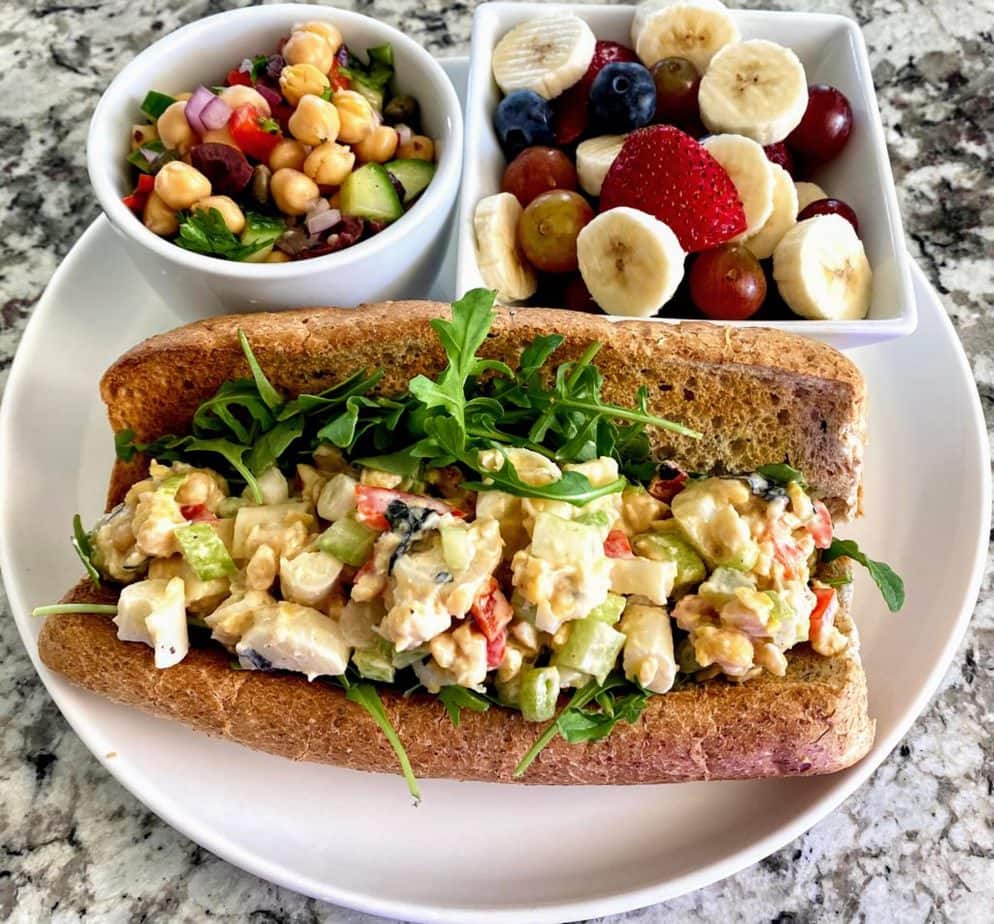 I served my lobster roll with Mediterranean Salad with Chickpeas and fresh fruit salad. Or, here is a list of other great ideas to accompany this lobster roll recipe. 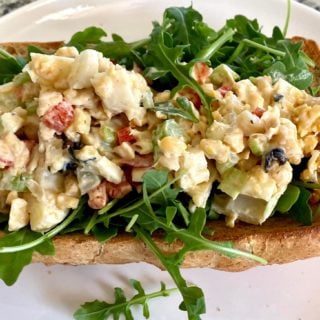 For a nut-free version, replace cashews with either white beans or silken tofu.