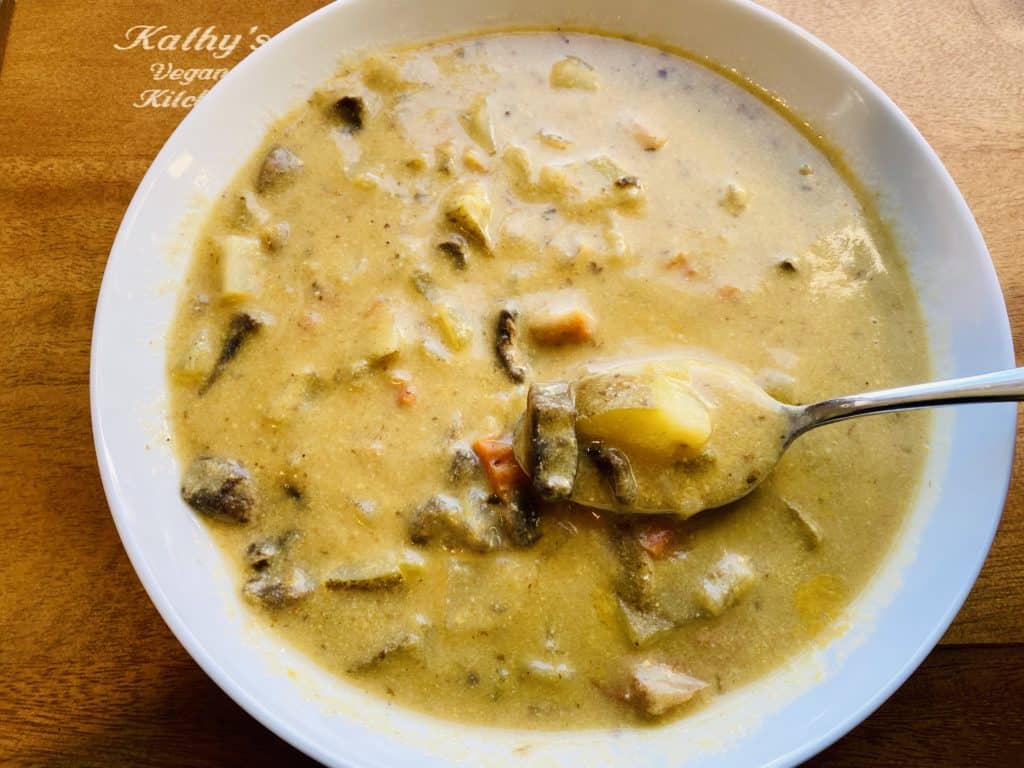 Regardless of the weather, I LOVE soup. Even in Arizona, in 100 plus temperatures, I order soup out or make it at home. Soups are not only easy to make, but the soup is also filling, satisfying, inexpensive, and freezes well if, of course, you have leftovers. Vegan clam chowder, for instance, is one of my favorite soups because it's creamy, full of vegetables, and simply delicious.

Typically, I am not a fan of chewy, slimy clams. However, clam chowder has nothing to do with the taste of clams. Instead, it's the flavors and textures in the creamy, savory soup. So when I transitioned to a plant-based diet, I started "veganizing" my favorite foods.

Even though I don't remember clam chowder tasting like clams, I remember the potatoes and vegetables in a creamy, thick, savory broth. And I'm a savory girl.

Similarly, I remember clams tasting like oysters or escargot, slimy, difficult to chew, and tasteless. When I was young, my dad wanted me to try a raw oyster.

Curious, I put the oyster in my mouth and swallowed. Within a second, the oyster came right up my throat and back into my mouth. Let's say that was a less than good memory.

But, the texture of cooked mushrooms, on the other hand, is a much better option for vegan clam chowder soup. For that reason, mushrooms transform into vegan clams.

CUT THE WHOLE MUSHROOMS INTO 8 SECTIONS; DO NOT SLICE THEM THIN! 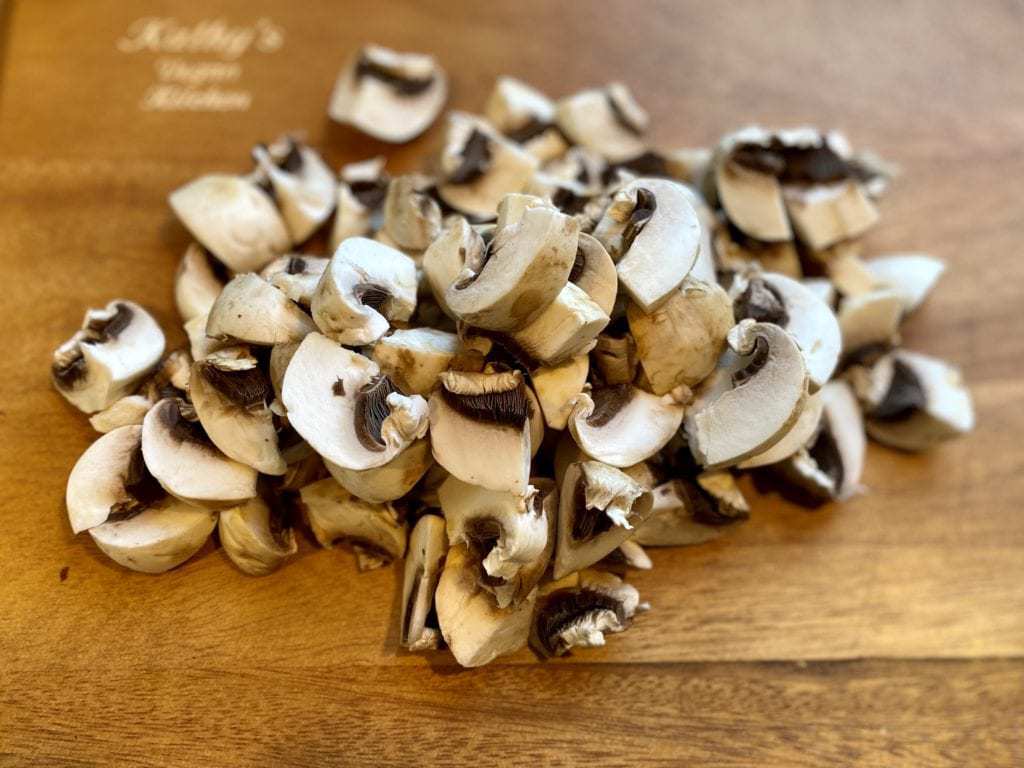 Vegan clam chowder doesn't taste like clam chowder; it’s way better! You may mistake this soup for the real deal with a similar texture and creamy base.

This plant-based vegan clam chowder recipe tastes creamy and buttery without any butter or added fat from oils or vegan processed food. The savory flavors remain, but without the unhealthy fat. Plus, you get the added Iodine from the Dulse.

Dulse is a variety of seaweed that resembles leafy red lettuce when fresh. Its flavor will remind you of the ocean — its minerality makes it a great stand-in for salt.

The benefits of Dulse include, for example, high levels of protein and fiber. In addition, Dulse is a nutrient-rich red algae that has become increasingly popular in health food circles due to its numerous nutrition properties. As a result, more and more experts advise people to implement sea greens into their diets, including Dulse.

Here are some great ways to incorporate Dulse:

To get the flavor of the sea, I use seaweed or chopped Dulse. Not only does Dulse or seaweed supply a sea-like flavor, but it also gives the addition of a natural form of Iodine. 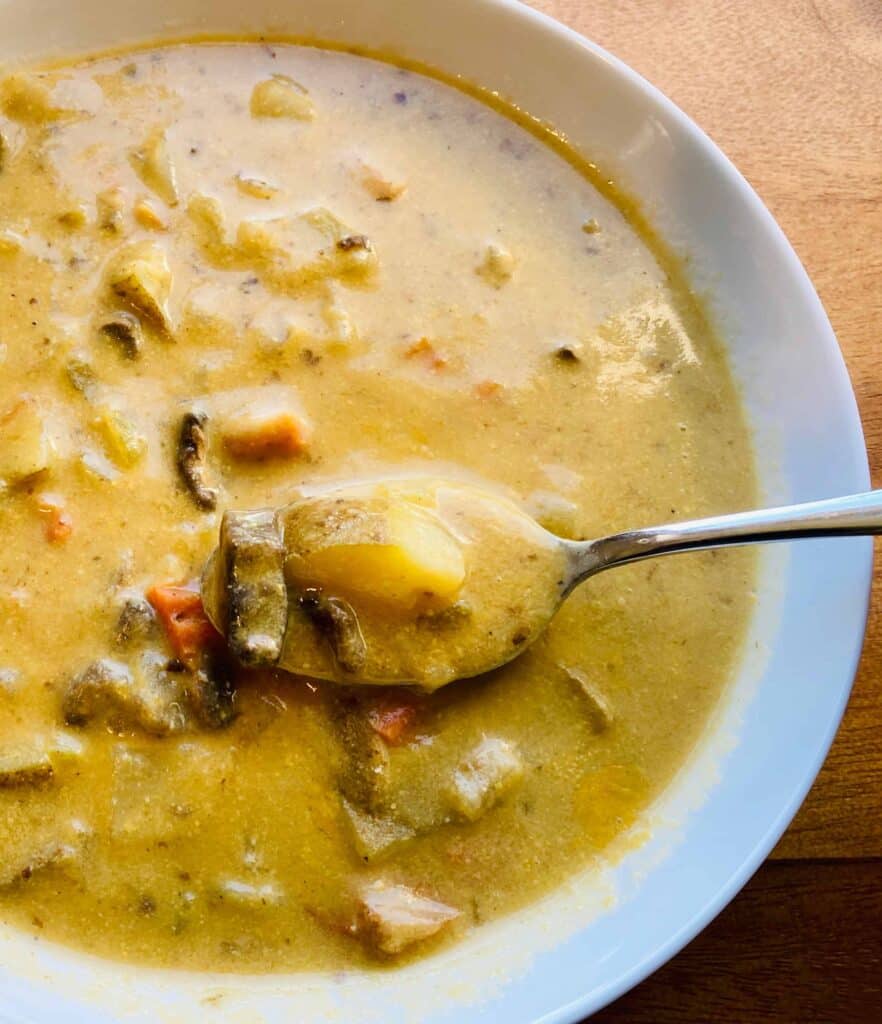 To create clams, I marinate the mushrooms in a small amount of liquid smoke, garlic, and soy sauce (or Tamari if gluten-free.)

Cutting the whole mushrooms into small bite-sized chunks (not slices) gives them a more "clam" like texture. Any mushrooms can be used, but I decided to use baby Bellas, smaller portobello mushrooms, to get the heartier texture.

Then, I saute the mushrooms separately from the other soup ingredients to pre-cook them before adding them.

Next, in a separate soup pot, I sautéed onions, garlic, celery, carrots, and fresh thyme together. The potatoes are all uniform in size but serve as the chunky yet soft component in the soup. 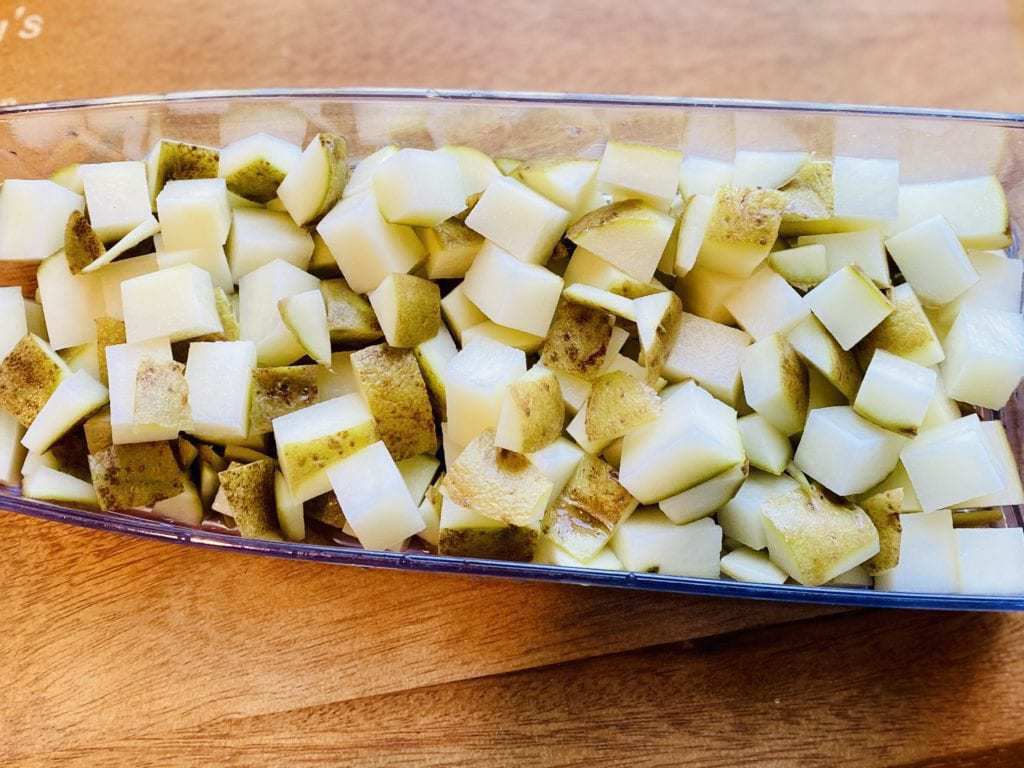 To thicken the soup, I  made an oil-free roux. Roux, for instance, is generally made with butter or oil and flour to thicken soups. Fortunately, roux can easily be made without both.

The roux is made without added fat by simply adding small amounts of gluten-free flour or regular flour into the cooking vegetables.

Now, slowly add the vegetable broth, stirring until flour is absorbed into the vegetables. Then add the potatoes and Old Bay Seasoning( a creole seasoning), enhancing the flavors inherent in the Dulse.

Can I substitute another type of non-dairy milk for my vegan clam chowder?

Can vegan clam chowder be made gluten-free?

IF YOU LOVE CREAMY, DELICIOUS COMFORT SOUPS, GIVE THESE A TRY 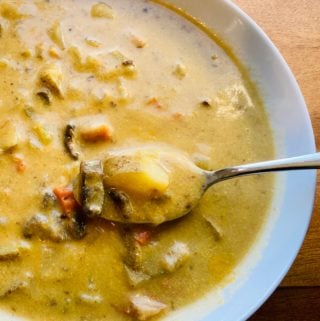