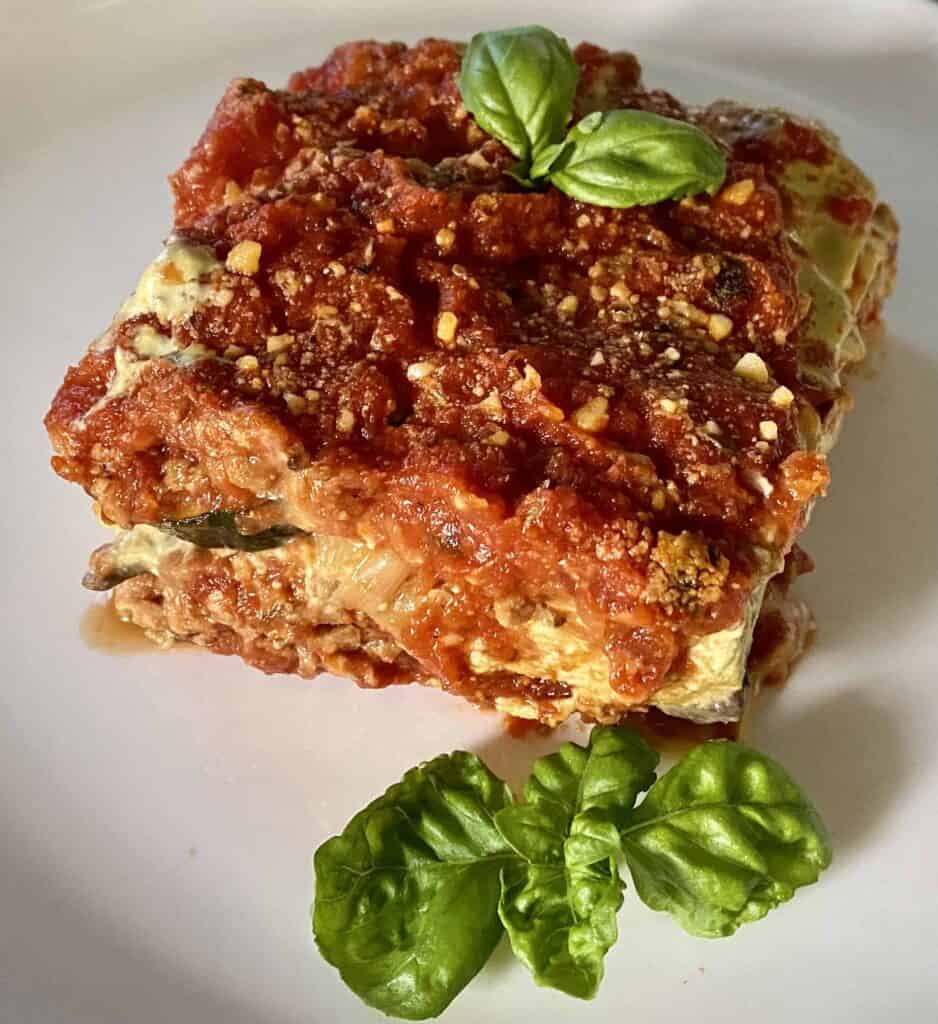 I instantly fell in love when I first discovered Sublime, a Fort Lauderdale vegan restaurant. Everything written about Sublime is true; it is a genuinely gourmet vegan experience, and there is no way to eat everything you want to try on the menu possibly. Typically, we order too much food and split everything to sample the menu. Although I almost tried everything on the menu, this vegan lasagna recipe, in my opinion, is by far the best lasagna I've ever eaten.

I think I subconsciously planned vacations to Ft. Lauderdale intending to eat at Sublime throughout our traveling to Florida. But, unfortunately, Sublime permanently closed its doors this past year and took its incredible vegan lasagna secret with it. After 15 years of owning this famous vegan restaurant, the owner and founder, Nanci Alexander, 71, decided to retire.

In fact, despite having written a Sublime cookbook, Alexander took her best-kept secret recipes, like my favorite vegan lasagna, with her. As a result, I have attempted vegan lasagna repeatedly, and I can only come close to mastering the recipe.
Without much to go on other than my taste buds, but I keep trying. However, time and time again, I can't seem to master the texture, flavors, and delicate layers to work together.
My husband, critic, and taste tester, Paul, is honest in my efforts. He tells me straight up, for instance, if I'm close or not quite there yet. According to my husband, I finally nailed it with my revamped recipe, and if I say so myself, it was EPIC!

One part of this recipe will always stay constant: the basil cashew cheese sauce I put between the layers of vegetables and noodles.

In my opinion, there is no such thing as too much basil or nutritional yeast. I grow my basil in my kitchen to cut back on the cost of buying it, and it continuously grows if you take good care of it.

The combination of raw cashews, nutritional yeast, and fresh basil is genuinely unique! Of course, if you are allergic to nuts, you can substitute vegan cheese, but I think the cashew cheese sauce adds to this vegan lasagna recipe's creaminess.

Just pop it all in the blender, and blend until smooth. And, yes, that is my photo-bombing dog, Howard! 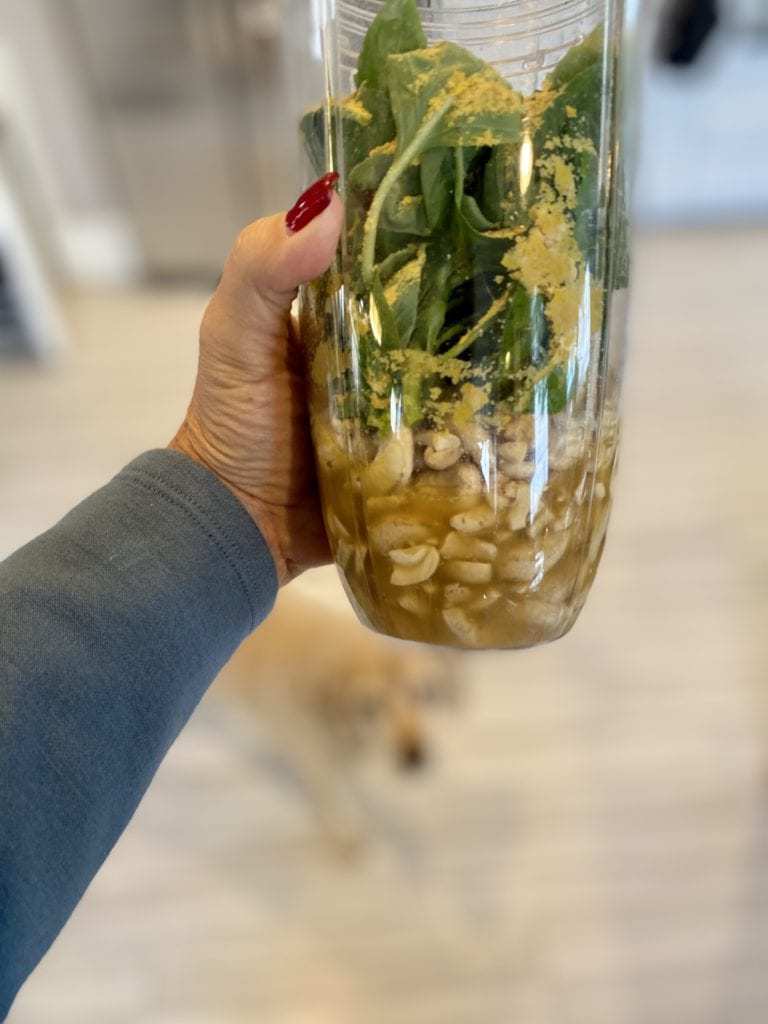 First and foremost, homemade  Vegan Marinara Sauce is the key to fabulous lasagna. I USE JARRED SAUCE when I'm in a hurry, so feel free to use jarred sauce instead.

When I make my homemade vegan marinara, I always double or triple the recipe to freeze it and use it when needed.

But, the secret sauce brings the dish together. Before my revamp, I needed to use frozen spinach instead of fresh spinach in my earlier recipe. I was wrong. But, again, it is about texture, and although I was trying to get that texture, I missed flavor and freshness when using frozen spinach.

So, I opted for fresh spinach, raw summer squash, and Zucchini, leaving both raw before cooking the vegan lasagna. As a result, the Zucchini stays al dente instead of getting mushy, and the spinach wilts, giving off moisture to keep the dish saucy. 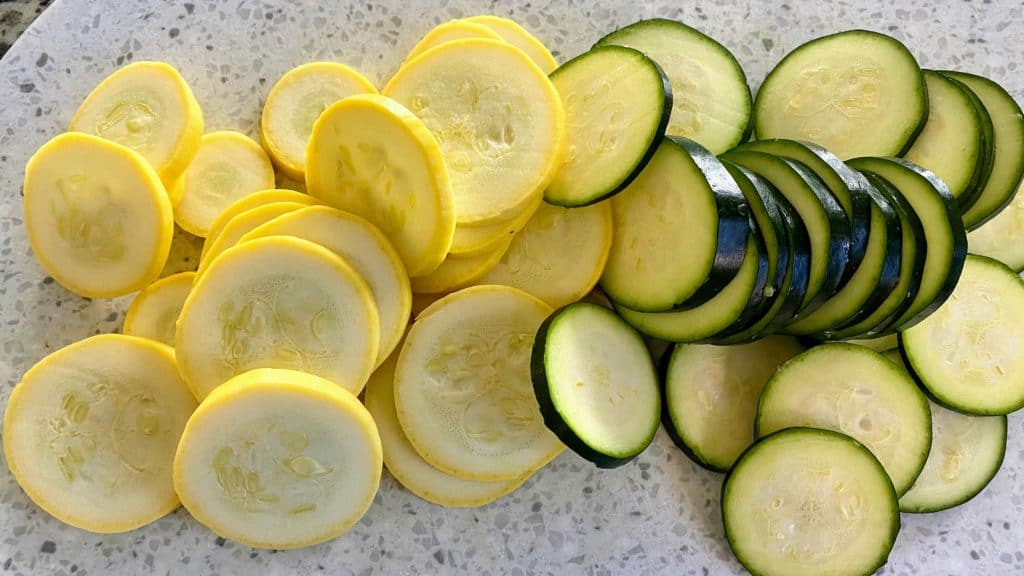 Sauteeing the mushrooms, garlic, and onions first keeps them firm and carmelize them together to add more flavor. 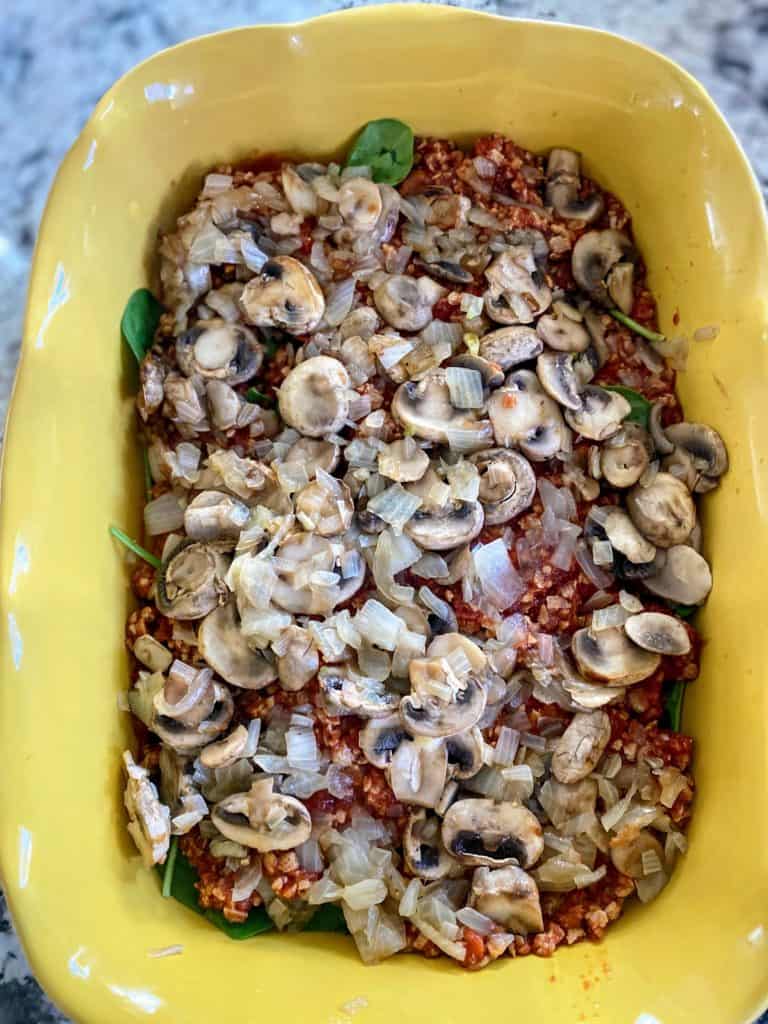 My former vegan lasagna recipe is the layers of vegetable lentil stuffing from my Veggie Stuffed Shells recipe. 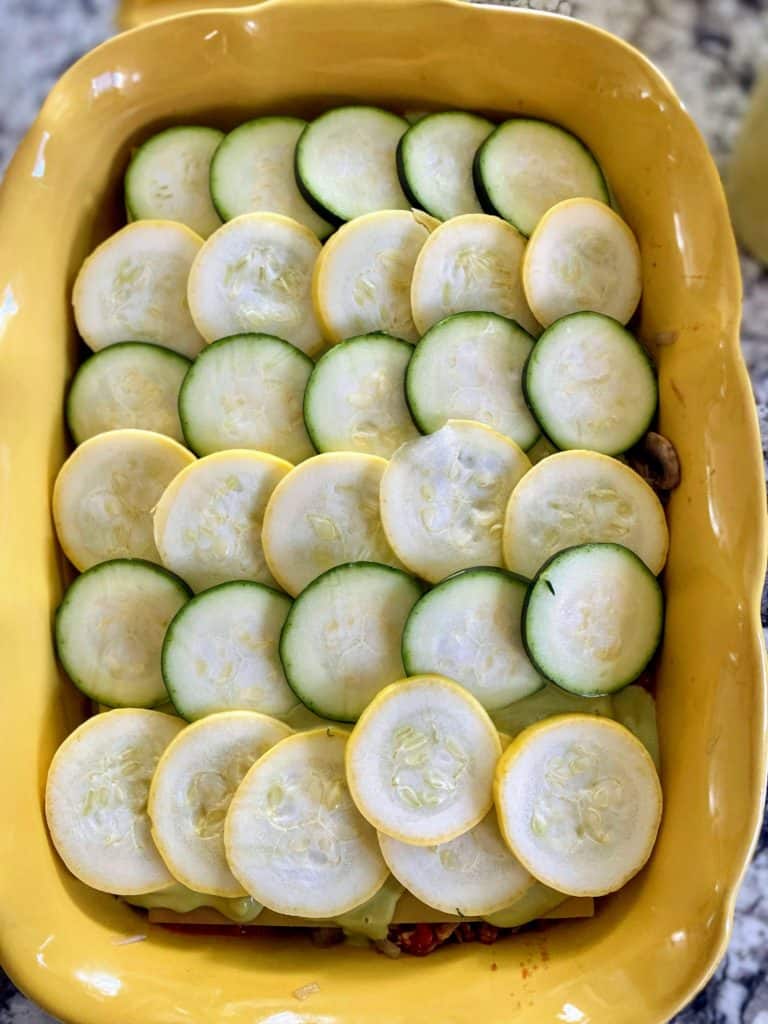 Also, fresh herbs are essential in the sauce, cashew, basil cheese, and garnish. I love my herb scissors, which my girlfriend, Kim, gave me for my birthday. 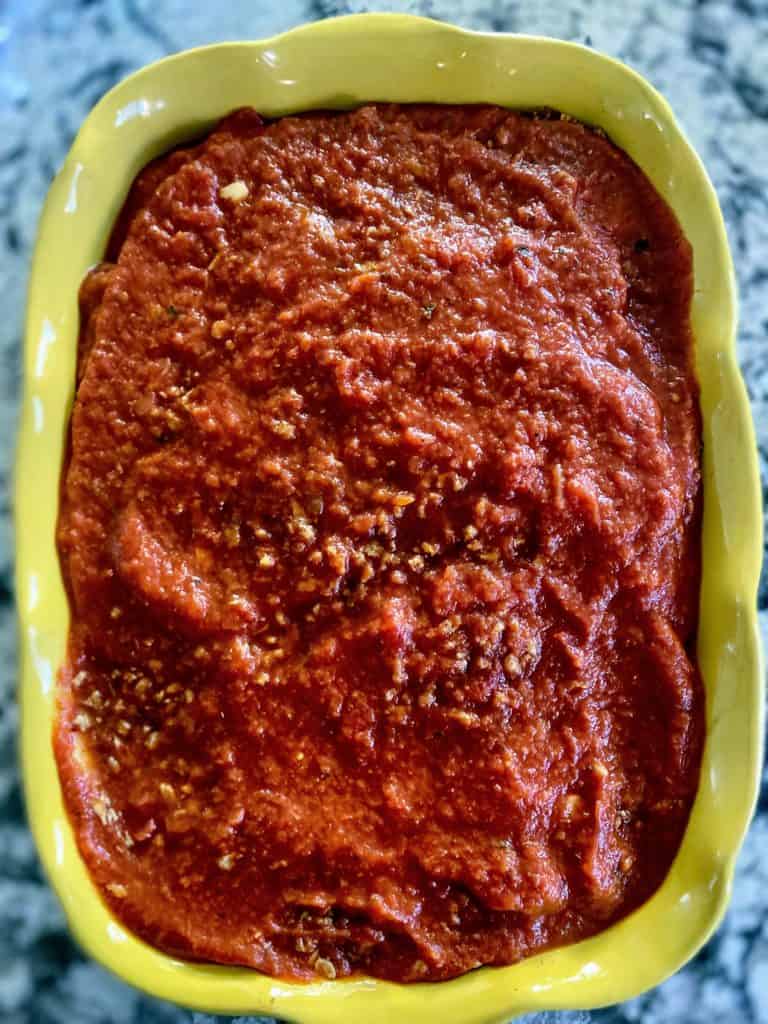 With all great recipes comes the fun of putting all the steps together. For vegan lasagna, it's all about the layers. Without a doubt, this is the joy of cooking lasagna.

First, you always put a thin layer of sauce in the bottom of your pan to prevent sticking.

Yep, this means you can skip any cooking spray or oil. Next, you layer your no-baked or pre-cooked noodles, crossing over a bit to seal the layer of noodles together.

Then, add a layer of basil cashew cheese, then lentil veggie "meat," followed by more sauce, mushrooms, onion, and a layer of spinach, and a zucchini layer.

Once all the ingredients are layered into one pan, cover up tightly with aluminum foil and bake; after removing the vegan lasagna from the oven, leave it covered for 20 minutes.

And then, uncover and cut into delicious pieces. I reserve some marinara sauce for the end serve and garnish with fresh basil. Don't forget the Vegan Parmesan Cheese! 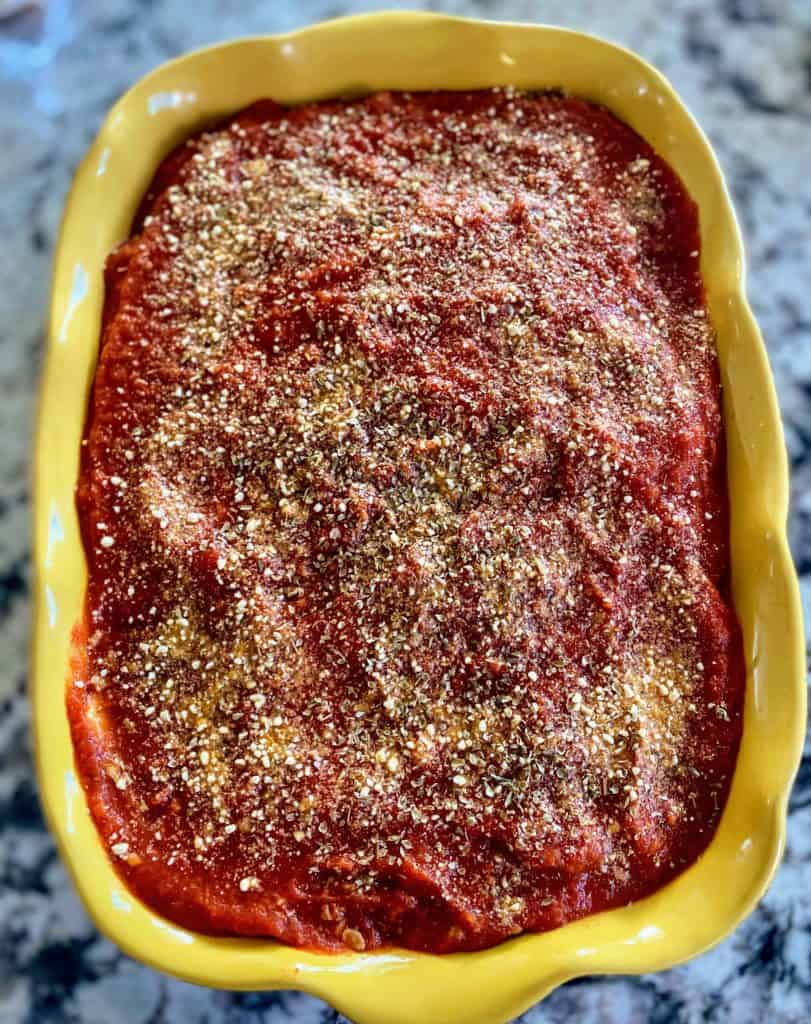 Here are more recipes you may enjoy if you love Italian comfort food as much as I do. 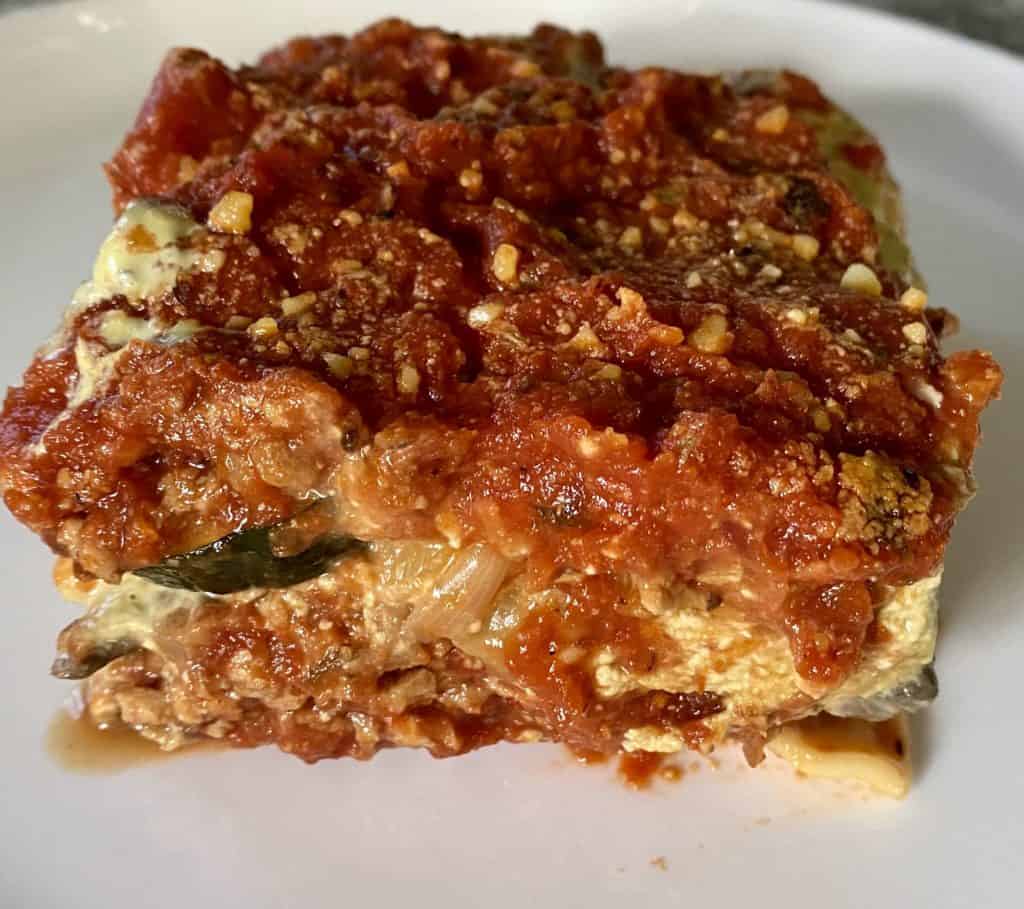 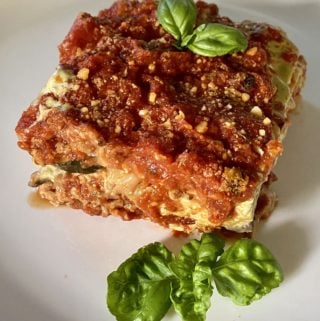