When I first tried to make a JUST Egg omelette, it was an epic failure. Since then, however, I've learned a few tricks. And, I was pleasantly surprised by how perfect my JUST egg omelette recipe turned out. My husband, who is my biggest critic said it is the best vegan omelette or real omelette he's ever had. Considering he was once an egg fan, I'll take that as a compliment.

I've never enjoyed eggs, even as a child, before transitioning to a plant-based lifestyle. However, getting my family on board took a little coaxing and a lot of creativity.

As I said before, when I first tried JUST egg, I found its texture runny and not very egg-like. But with a few adjustments, I transformed the JUST Egg product to make the best vegan omelette.

What is JUST Egg?

JUST Egg is made from water, mung bean protein isolate, canola oil, gums, and seasonings and is designed to look, cook, and taste, just like eggs.

Eat Just was founded in 2011 by Josh Tetrick and Josh Balk who created a vegan egg substitute with the philosophy of improving the environment, promoting healthy eating, and saving chicken.

They claim, "the best eggs don't come from chicken; they come from plants. And delicious eggs might just fix our planet. We separated the egg from the bird to end the unsustainable mass production of one of the world's most common foods. Because the industrialized egg system, sucks for our bodies, for the earth, and, let's be honest, it's not a party of the birds either."

To mimic the texture of an egg, I add flour and a little baking powder to the JUST egg product and whisk it together. Then, add a little black salt, or India Black Kala Namak if you desire it to taste like an egg.

Although many omelette recipes add the vegetables raw into the JUST Egg mixture. Instead, I like to saute my vegetables first and then add them to the egg mixture.

Begin by sauteeing the onions, followed by the mushrooms, zucchini, and red bell pepper. The spinach, which is added last, wilts in the last few minutes of cooking the vegetables.

I prefer to set the cut grape tomatoes and dill to add later in the recipe.

Once the ingredients are combined, pour the JUST egg and sauteed vegetables into a non-stick omelette pan.

Then, I add the tomatoes and dill at the end, right before serving so the tomatoes don't water down my omelette, and the dill stays flavorful and not overpowering.

Next, fold one side of the JUST Egg omelette over the opposite side.

How much JUST Egg is equivalent to one egg?

A 3-tablespoon serving of Just Egg equals one egg.

What can I use JUST Egg for?

How long does JUST Egg last after cooking?

After opening the container it will last for up to 4 days in the refrigerator.

The next time you're looking for a quick breakfast, try a JUST Egg omelette.

If you love this JUST Egg omelette recipe, give us a 5-star review and comment below. We would love to hear from you. 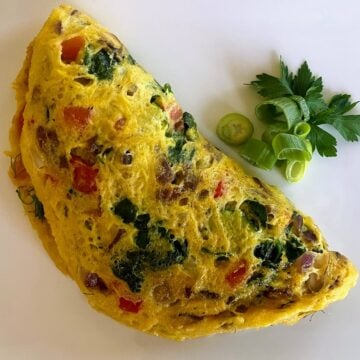