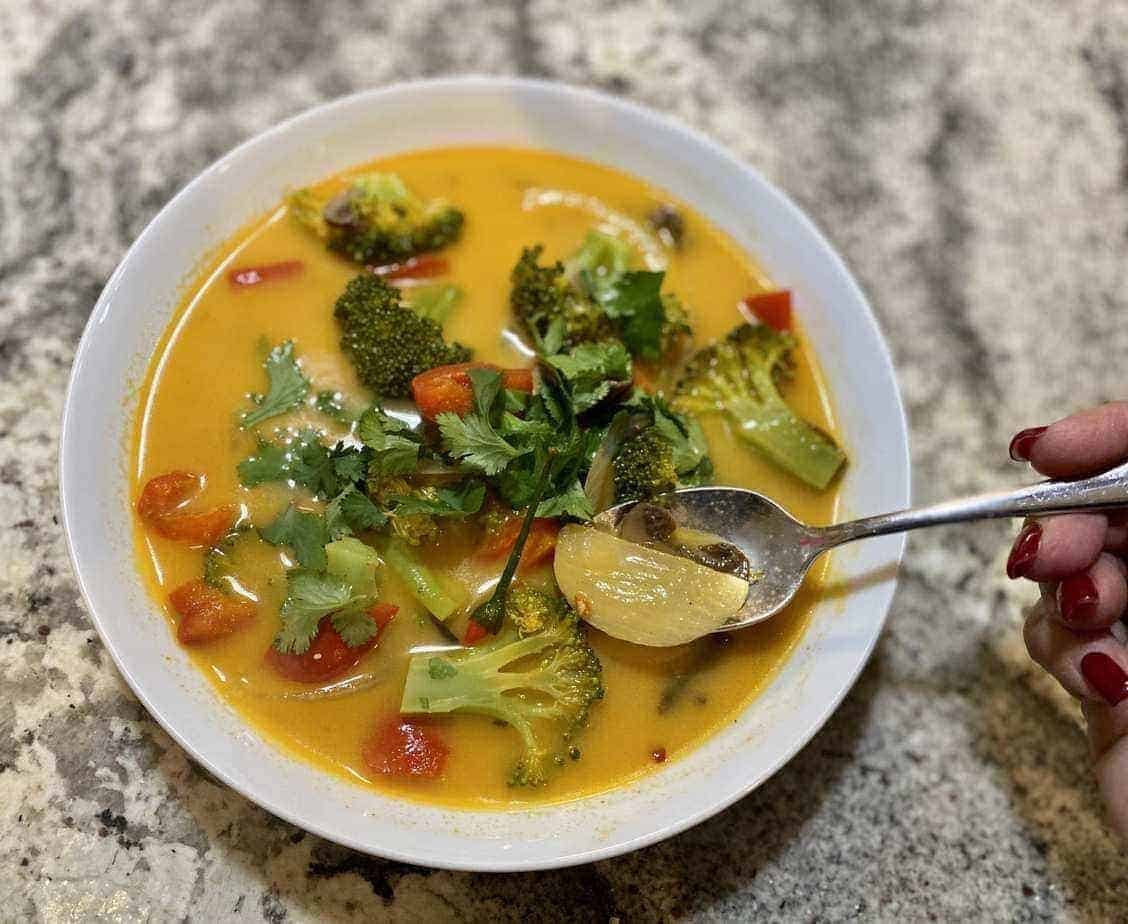 When I crave authentic Thai food, we always go to Old Town Scottsdale to our favorite Thai restaurant, Malee Thai. Although we are regulars, I always order the two same dishes; Arizona Heatwave and Green Basil Curry with brown rice. Despite the array of vegan options, I never adventure from my menu favorites. Not only is this ridiculous, but I miss out on some incredible dishes. Last night, I ventured away from my comfort zone and ordered a vegan Thai coconut soup recipe. And, I fell in love!

Since opening Malee Thai, the owner, Deirdre Pain has prepared meals individually in a 10' pans, serving 120 dinners a night. Not only do the chefs prepare each meal individually, but they also accommodate any and all requests, including vegan! As a result, Malee Thai offers cooking classes on Sunday afternoons in their bar area.

WHAT IS THAI COCONUT SOUP AND HOW IS IT DIFFERENT THAN TOM YUM SOUP?

Traditionally, Tom KHA GAI soup is a ginger coconut soup with chicken broth and large pieces of chicken. Of course, I asked our favorite bartender, Ouchi, what Tom Kha Gai means in English. Apparently, TOM means to boil, which is the broth, KHA means galangal root, and GAI means chicken, which we are skipping for this recipe.

Tom Yum, however, is a hot and sour soup traditionally made with shrimp. Despite their similarities, the only true difference, according to Ouchi, is if Tom Yum is made with coconut milk or just chicken broth. The vegan versions, of both soups, are similar in flavors, but Tom Kha Gai is a little spicier and smoother.

WHAT IS GALANGAL ROOT? 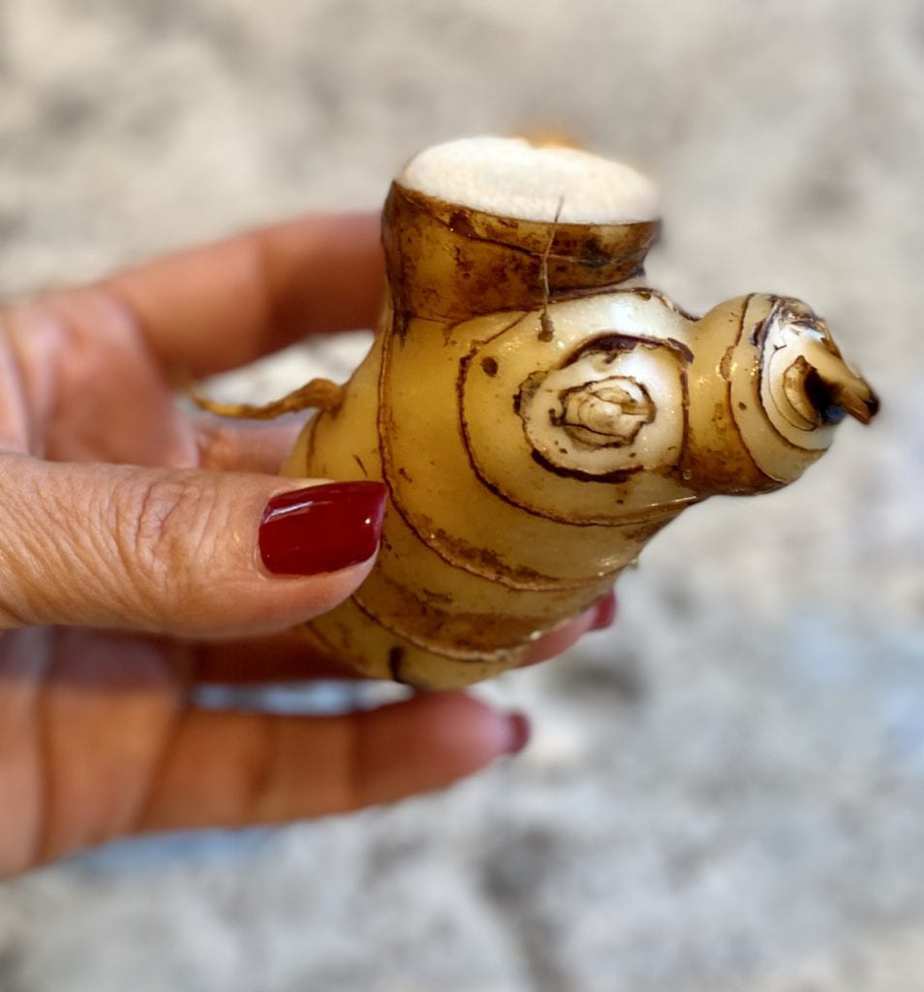 Another important ingredient is the lemongrass. Lemongrass, for instance, has a unique and fresh, mild citrus taste. The first time I had lemongrass was a Vietnamese restaurant we go to often. Interested in cooking with lemongrass, I went to Whole Foods, where I found a small package for almost $5.00.

The next day, while getting my nails done, my friend, Michelle, offered me a lemongrass plant. Since then, I have more lemongrass than I could ever eat. Not only is lemongrass easy to grow, but it also grows like a weed outside. And, it also keeps snakes away, which is a bonus in Arizona.

Following Michelle's guidance, I planted this small and unimpressive plant, and it grew immediately. My husband, Paul, is my lemongrass harvester. Thanks to Paul, and instructional Youtube videos, we now have endless lemongrass all year long. 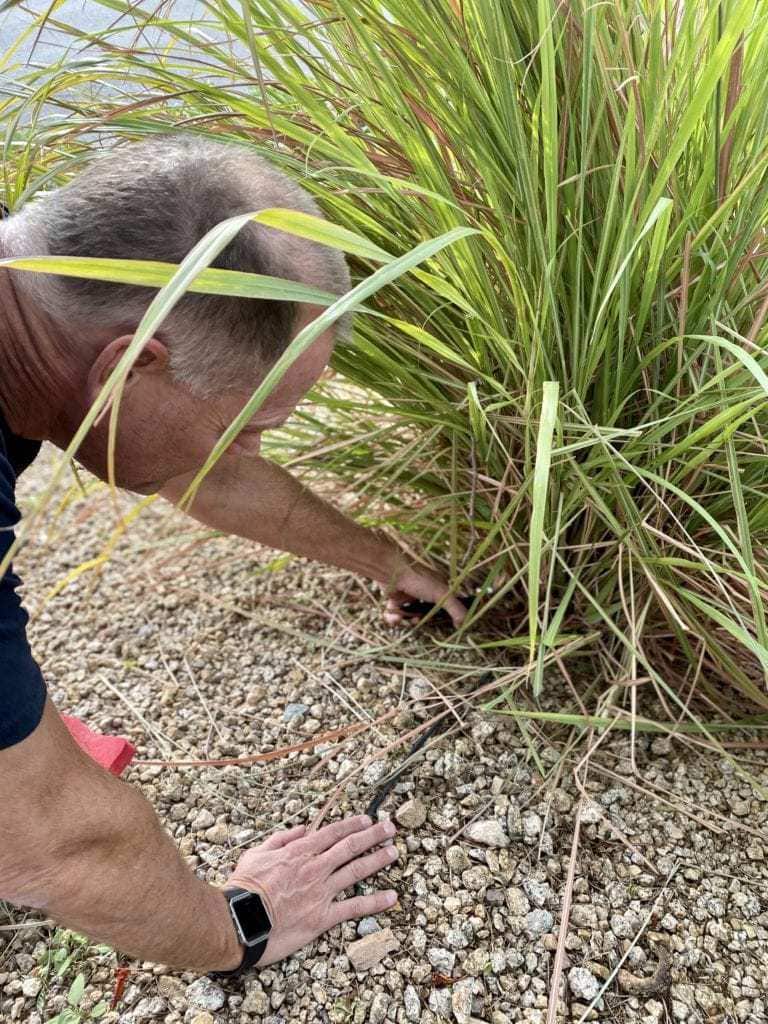 HOW TO USE LEMONGRASS IN THAI COCONUT SOUP RECIPES

In order to use the lemongrass in cooking, you first have to chop off the thick ends and peel away the layers, like an onion, until you get a pliable stalk that bends. Then, you simply use a meat mallet (yes, I still own one of these), and smash the bottoms of the stalks. For this thai coconut soup recipe, for example, I used this method because the lemongrass stalks are removed after cooking. 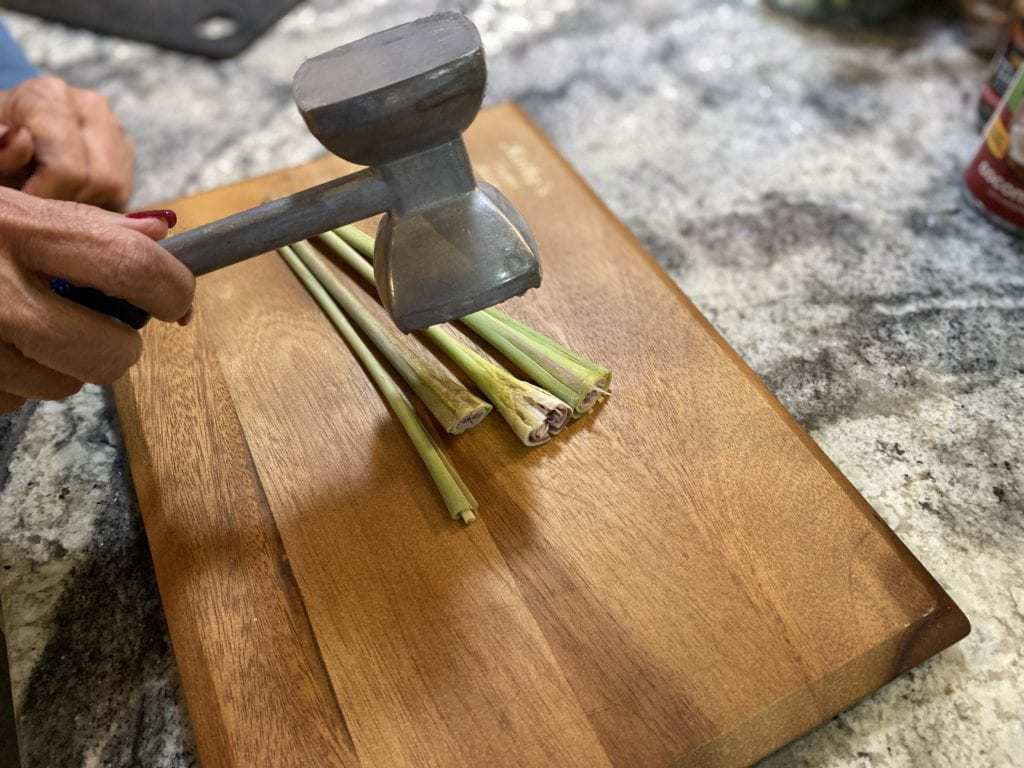 Another way to prepare lemongrass is to peel away the outer layers and then dice it to add to Thai or any Asian dish you prefer.

Red Curry paste is yet another secret ingredient to giving this soup its incredible flavor. I use Thai  Kitchen Red Curry Paste often in my Thai Red Curry Vegetables, Red Coconut Curry Stir Fry, Skinny Thai Curry Noodle Bowl, and my Vegan Curry Pizza. Not all curry paste is vegan, so make sure you check to make sure it doesn't have fish sauce in the list of ingredients. This particular brand is also gluten-free if you follow a gluten-free diet.

Instead of chicken broth, I chose my favorite imitation vegan chicken broth, Imagine No Chicken Broth. As a general rule, I always choose this type of vegetable broth when making a soup traditionally made with chicken broth.

Yet, another little trick I use for this coconut soup recipe is adding one piece of Kombu to the soup as it boils. Because I don't use fish sauce, an ingredient commonly used in Thai coconut soups, the kombu acts as the fish sauce in the broth. 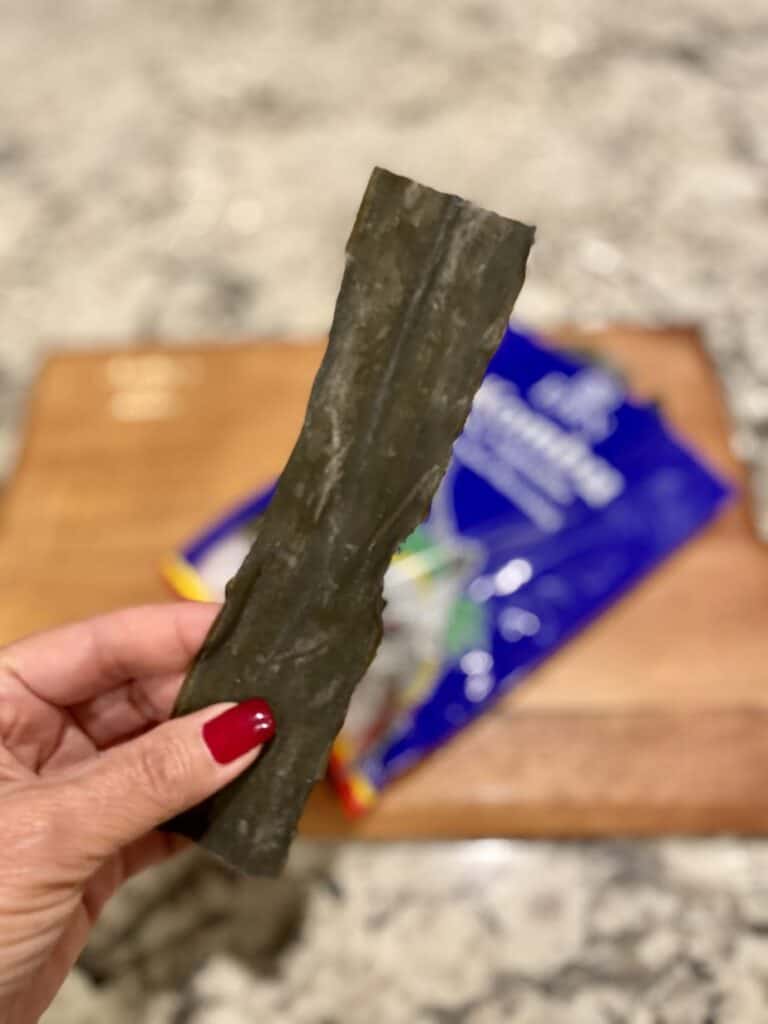 This magical sea vegetable can change your vegan life. Many people have asked me how I can eat so many beans and other legumes without the stomach pains and gas associated with eating beans and legumes.

Seaweeds are becoming more widely known as a healthy food with few calories and rich minerals. Kombu kelp, however, possesses something that other edible seaweeds do not, and this is what makes kombu kelp the “King of Seaweed.” Not only is Kombu kelp delicious on its own, but it is different from other seaweed in that it produces Dashi(stock). No other seaweed has that gift. This exclusive characteristic of kombu kelp is extremely important and is indispensable to Japanese cuisine. Dashi is the base of several dishes and valued as a vital and rich ingredient.

In my opinion, its real power is in its ability to take the gas out of beans; yes, removes the negative results of heavy bean and legume consumption.

WHAT VEGGIES SHOULD YOU PUT IN YOUR VEGAN THAI COCONUT SOUP?

First, you can use any vegetables you like. Malee Thai's vegan Thai coconut soup recipe was full of mushrooms, red bell pepper, white onions, carrots, celery, and my favorite, broccoli.

Broccoli, by far, is my favorite vegetable to add to spicy or any flavorful foods, for that matter. Not only does broccoli cook well in soups, but it also holds the heat and spices of whatever sauce I choose.

Other Asian vegetables you can also add are daikon radish, bok choy, bamboo shoots, or eggplant. At Malee Thai, for instance, they offer the soup with smoked or soft tofu. So, when you make your own vegan that coconut soup, add any of your favorites; the broth is so good any vegetable will be lucky to be floating in your bowl. 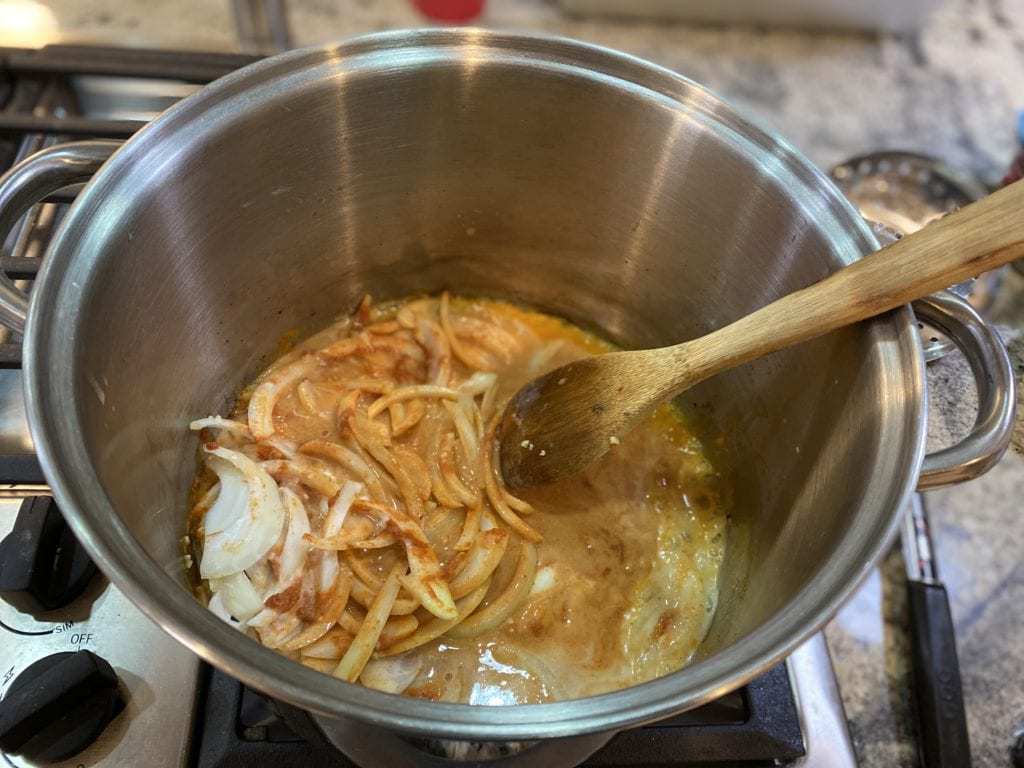 Next, I add the cream that floats on the thick top of the coconut milk (only), leaving the milk in the can, and add the mushrooms. 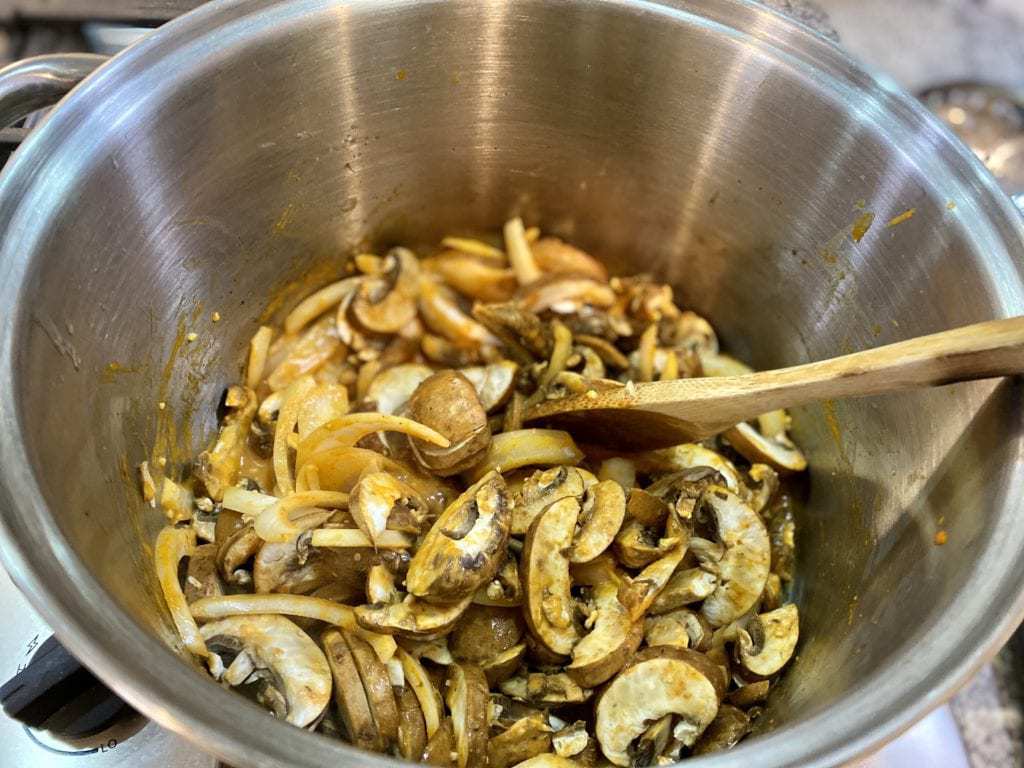 Then, I add 4 cups of the Imagine No Chicken Broth, the pounded lemongrass stalks, and three large chunks of galangal root (these will be removed after cooking). After bringing to a boil, I add the additional 4 cups of broth, followed by the other vegetables. Again, you can use any veggies you like; I just used my favorite for this thai coconut soup recipe. 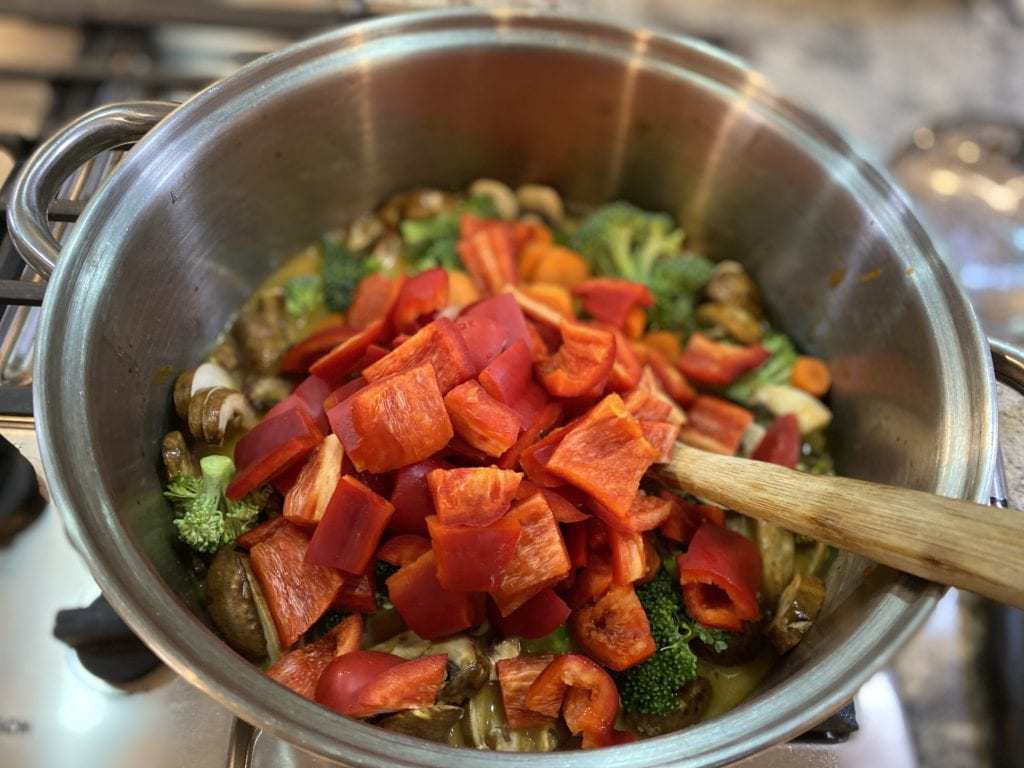 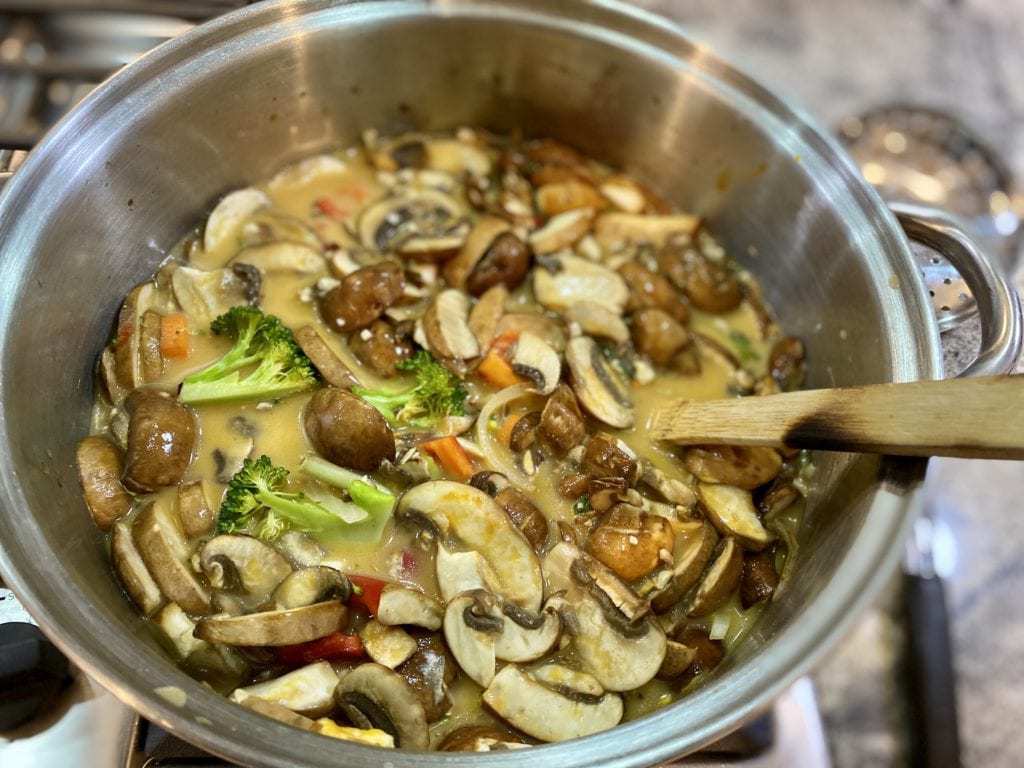 Once everything is added to the soup pot, bring the coconut soup to a boil a second time. This time, though, reduce to a simmer and add the lime juice, zest, and red pepper flakes. Continue to simmer for about 20 minutes. 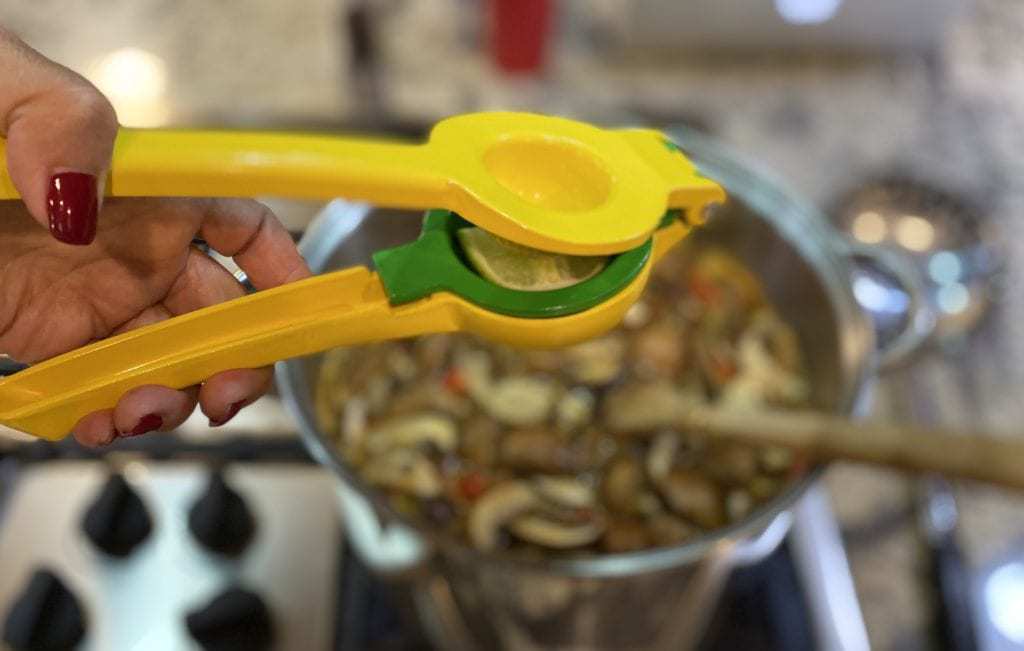 In my house, soup doesn't last very long. In fact, most of the time I aim for leftovers, but someone generally beats me to it by eating a second bowl of soup. Despite the many options for garnishes, I like to top my soup with fresh chili peppers, cilantro, and a little extra lime zest. I also, though, always serve with extra red pepper flakes and Sriracha, because everyone in my family likes it hot.

And, some of my kids, are simply immune to spice! Sometimes, I think they challenge each other and silently burning their mouths off.  But, to each their own. Similar to a Thai restaurant, my kids like it chef hot! 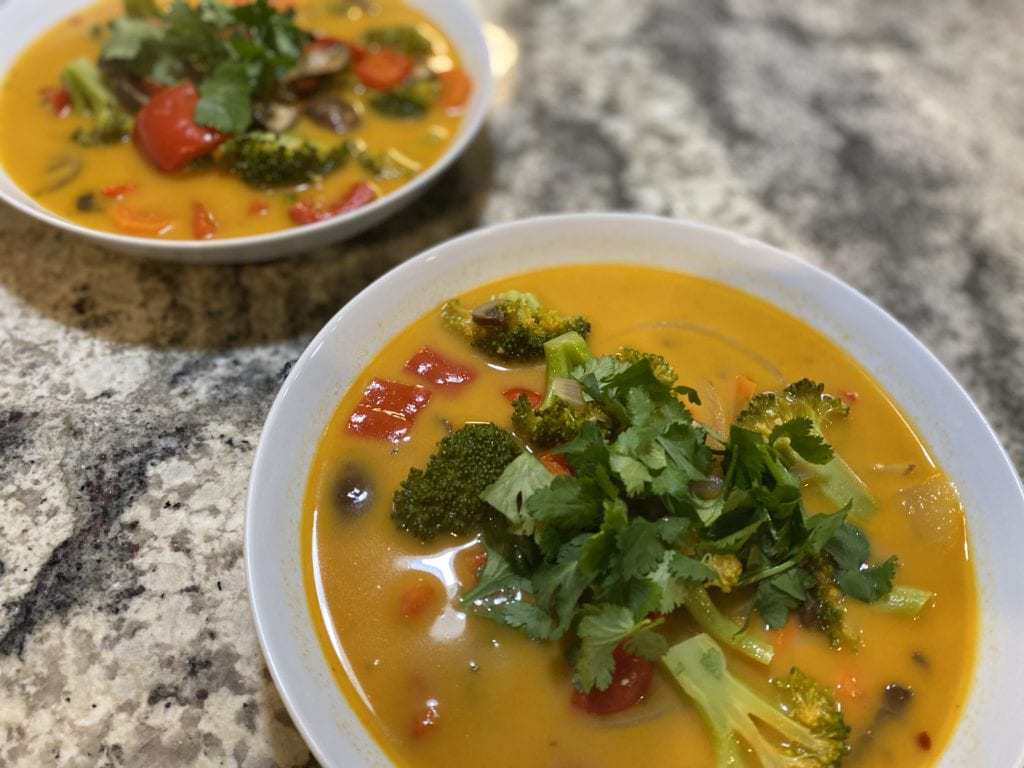 As I always recommend, go light on the spice, and taste as you go. You can always add more spice, but you cannot take it away once it is in a big pot of soup. So, tread lightly. 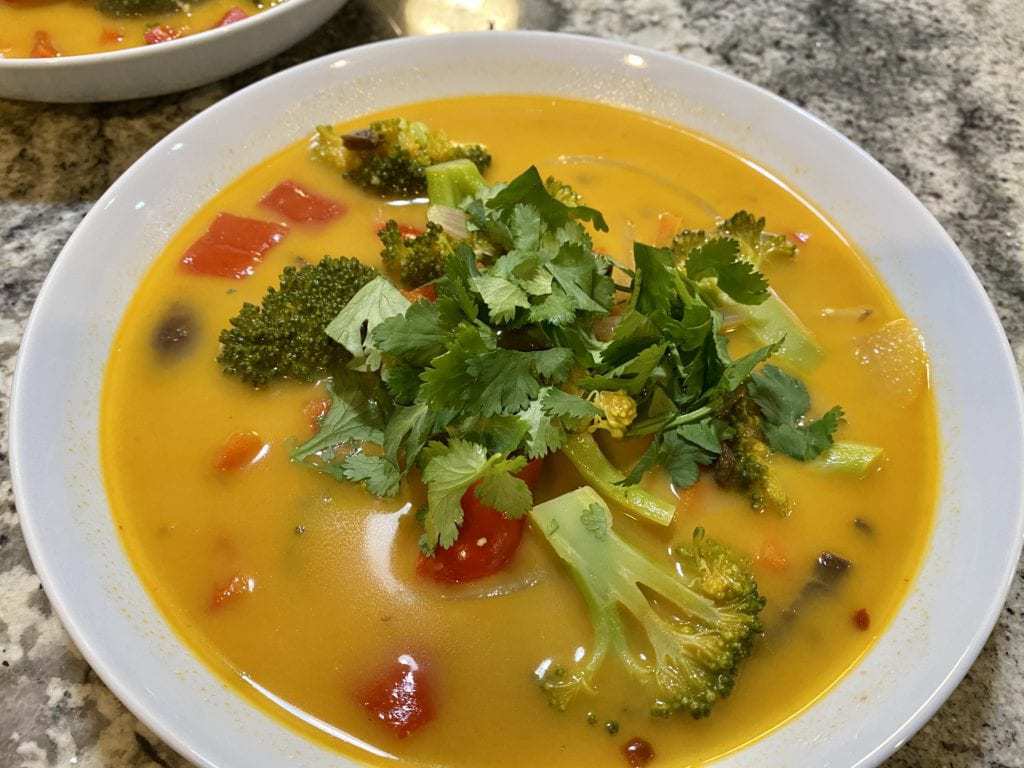 For those of you who like to meal prep, this soup freezes well and reheats perfectly to bring to work. This time, I was smart and doubled up the thai coconut soup recipe, so everyone had lunch today. 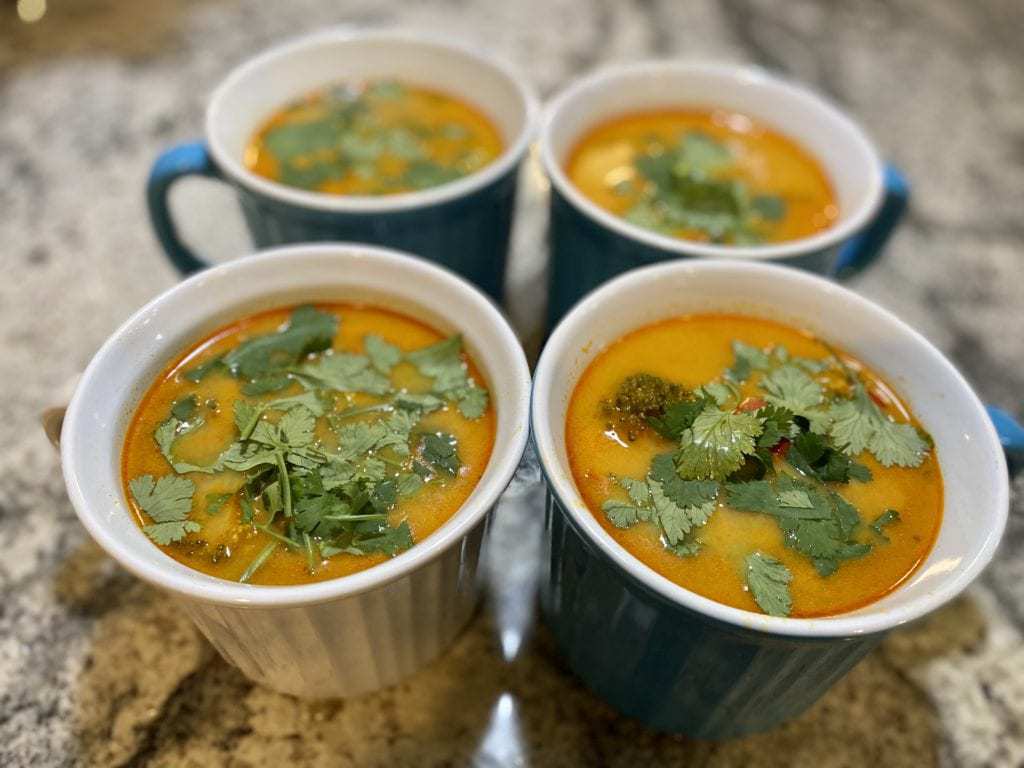 Obviously, my family loves Thai food and soups. If you enjoy Thai food as we do, check out these recipes ideas.

For those of you who like to meal prep, this soup freezes well and reheats perfectly to bring to work. This time, I was smart and doubled up the thai coconut soup recipe, so everyone had lunch today.