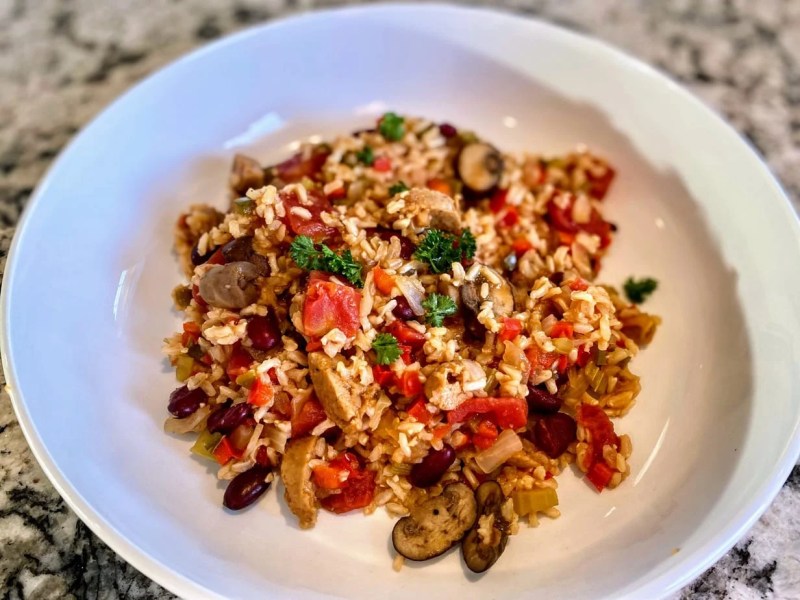 When looking for a quick and easy dinner, I always try to make a one-pot meal. Vegan Jambalaya, for example, is a one-pot simple recipe, that can be made in 30 minutes or less, which is my kind of recipe.

Jambalaya,  which is a Louisiana rice dish, originated in Spain and France. Although traditionally meat-based, Jambalaya can easily be transformed into a plant-based dish, maintaining the essence of the flavors and heat of typical jambalaya.

Despite its reputation for being hot, vegan jambalaya has a slightly spicy creole flavor, rather than using a hot cajun seasoning.

In order to make an authentic vegan jambalaya, I chose vegetables known as the “holy trinity” in Creole and Cajun cooking.

Even though vegetarian jambalaya is quick, easy, and can be made in one pot, it is loaded with vegetables, beans, brown rice and tons of flavor.

WHAT VEGETABLES ARE IN VEGAN JAMBALAYA? 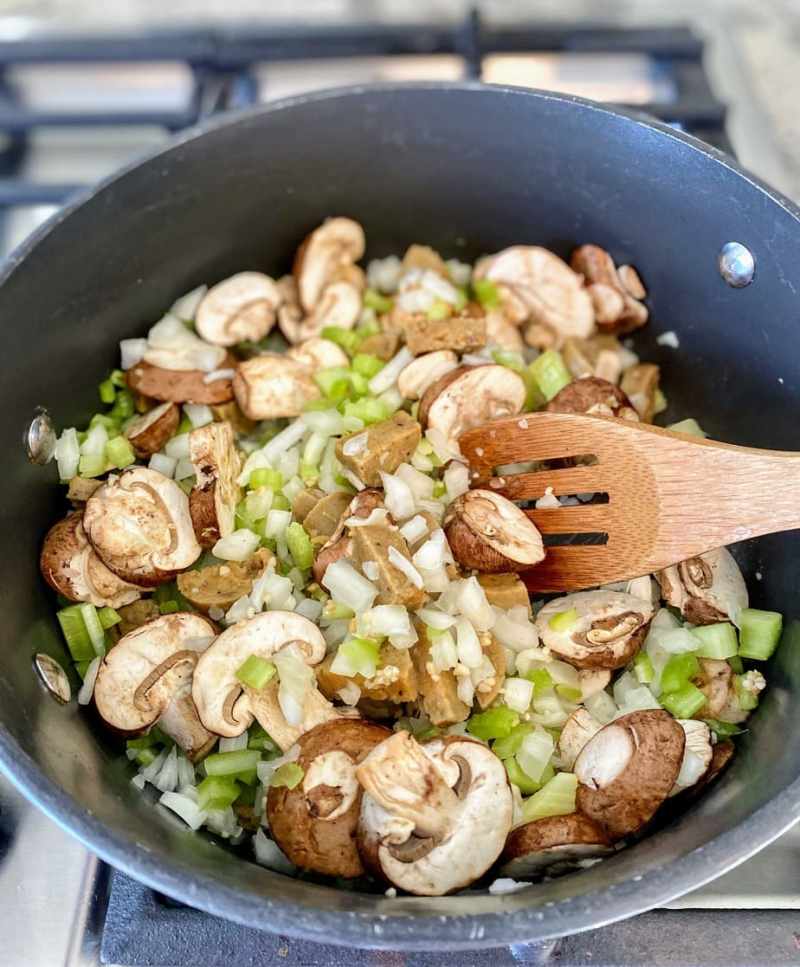 Of course, I added more vegetables to my vegan jambalaya recipe. Also, I included a can of dark red kidney beans. Despite my choice of vegetables, feel free to include any vegetables you prefer or delete those you don’t like. 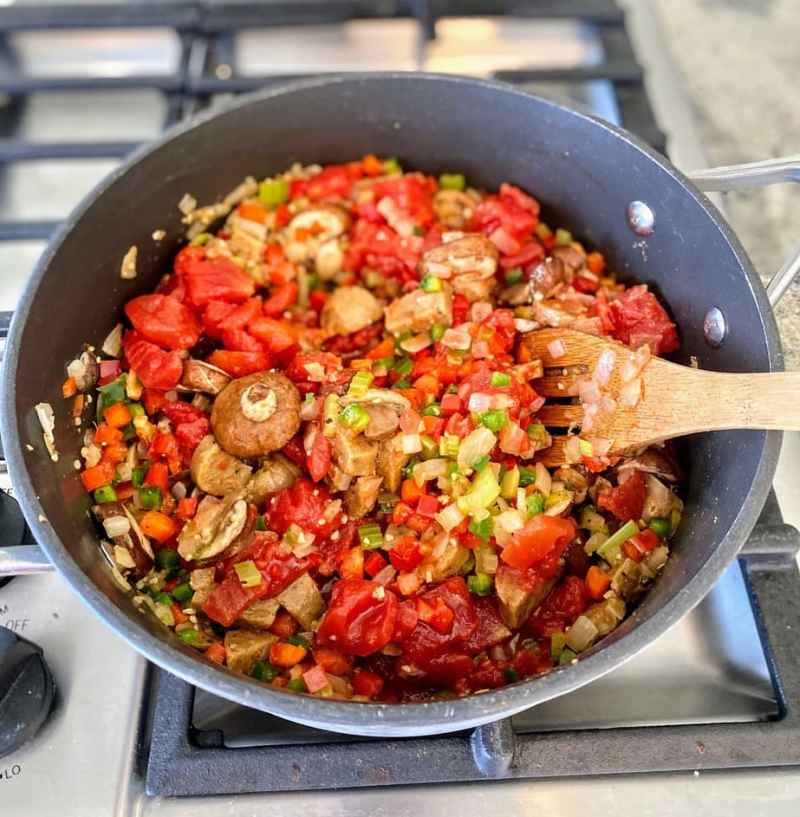 WHAT OTHER INGREDIENTS ARE NEEDED FOR ONE-POT EASY JAMBALAYA RECIPE?

Similar to other recipes, the secret is the combination of spices and herbs that bring out the natural flavoring of the vegetables and tomatoes.

However, the best part of this recipe is it all cooks in one pot in under 30 minutes. In fact, once everything is in the pan, and the vegetarian jambalaya is simmering, you can walk away. And, let’s not forget you will only have one pan to wash, which is a bonus! 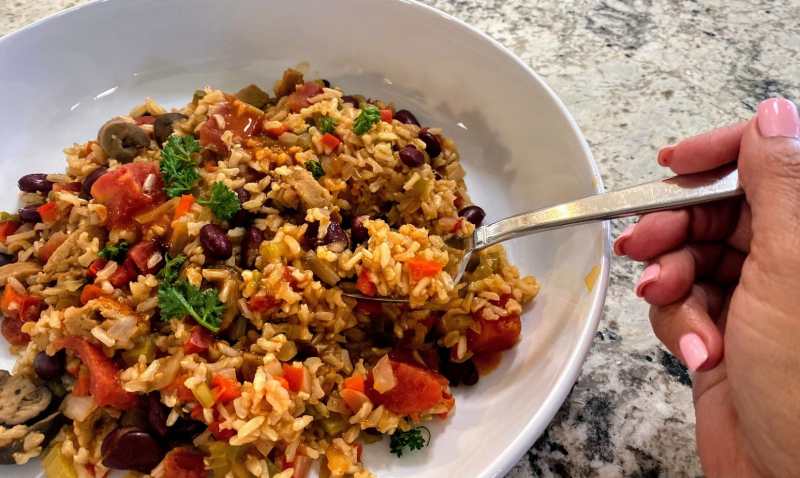 Although I am not a fan of “fake meat,” my husband loves vegan Field Roast Sausage.  I didn’t like meat when I wasn’t vegan, so eating fake meat that tastes like meat doesn’t do much for me. Since he enjoys it, I make the sausage separate and add it to his vegan jambalaya. FOr those who enjoy alternative meat, I have provided cooking options to include vegan sausage in the vegan jambalaya recipe.

If you want to include vegan sausage to the whole dish, saute the sausage, onions, and garlic first, before adding the other ingredients. 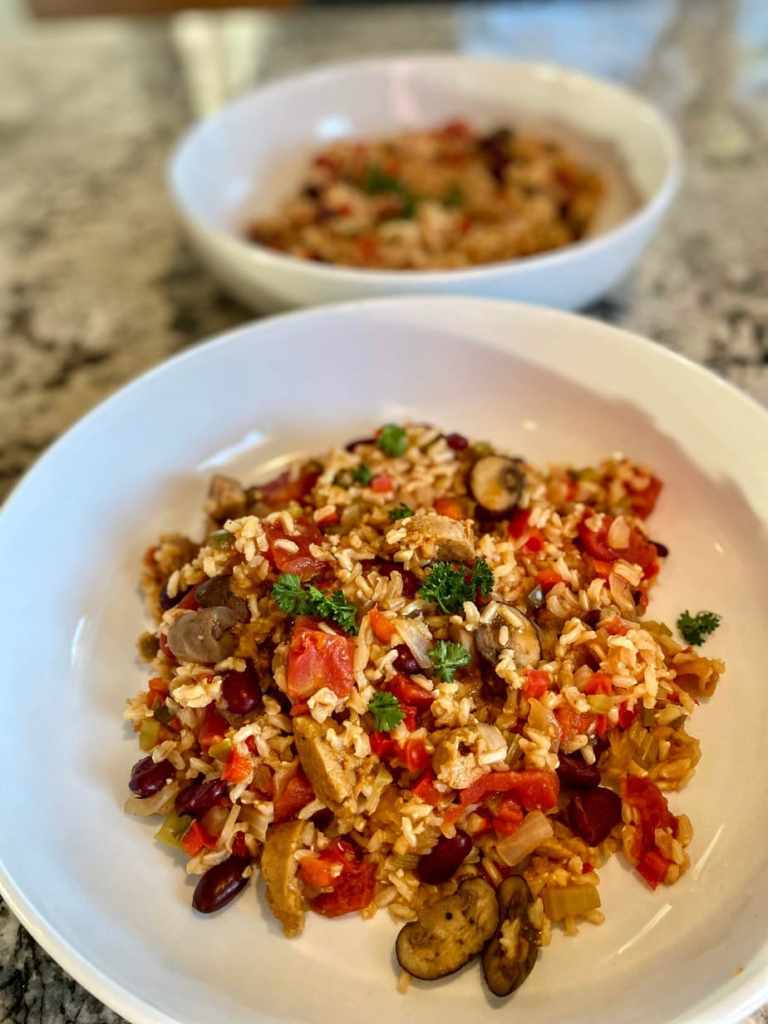 So if you need a quick and easy dinner, Quick and Easy Vegan Jambalaya is for you. Not only will you have a wonderful dinner, but the leftovers also pack up well for lunches the next day. As a result, you make a one-pot meal that gives you multiple meals during the week. Not a fan of leftovers? Vegan Jambalaya can be frozen. thawed and reheated easily. Share this amazing Vegan Jambalaya Recipe with your family and friends. 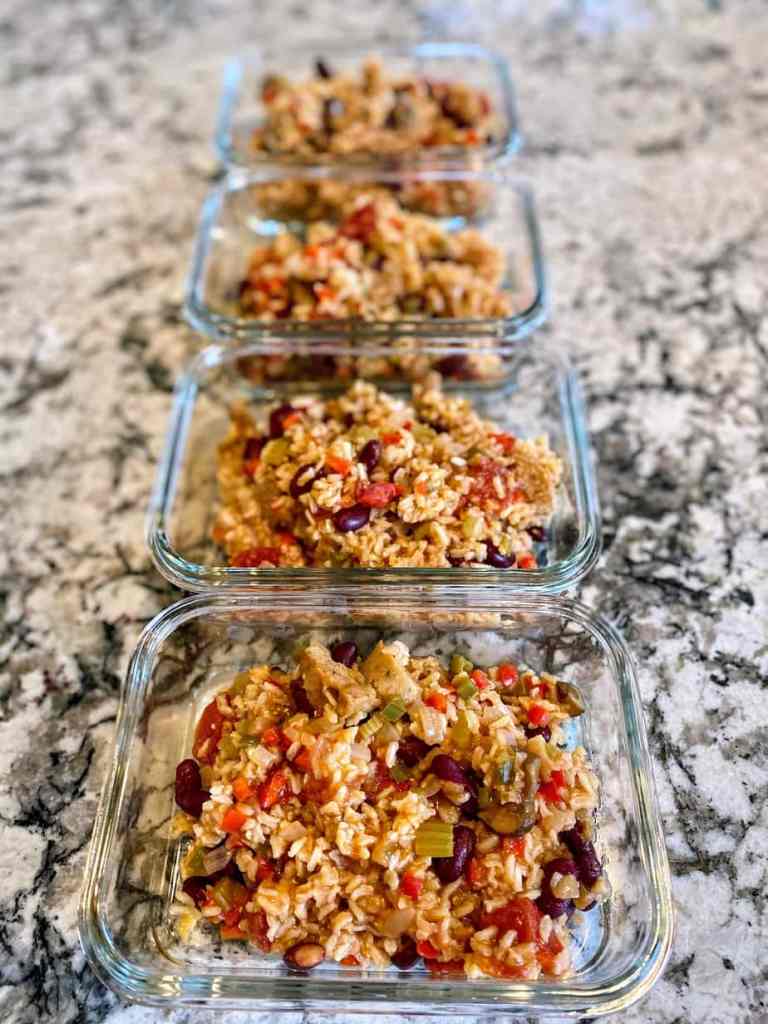 OTHER QUICK AND EASY MEALS OPTIONS FOR DINNER ON THE FLY?

For a quick and easy meal, vegan jambalaya is ready in 30 minutes from start to finish. Vegan jambalaya is loaded with veggies, brown rice, and beans. It all goes it one pot, so clean up is a breeze.