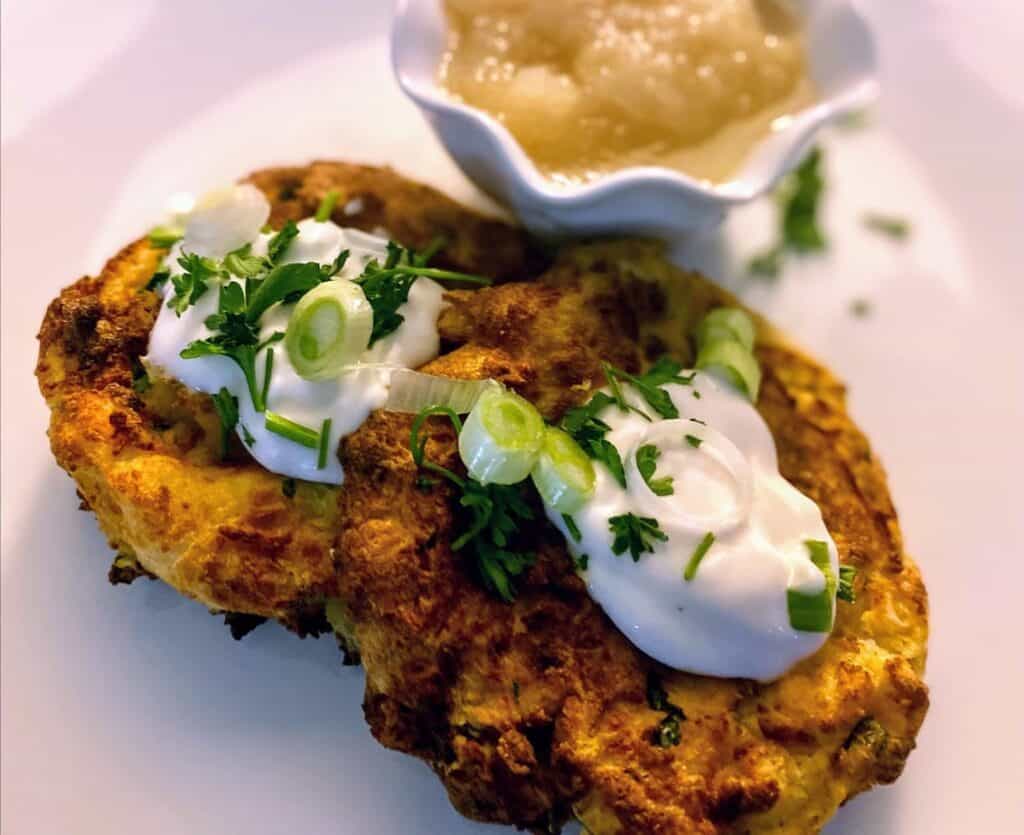 When I was a kid, my mom made latkes every time she had extra mashed potatoes. So, when I made vegan mashed potatoes, it was natural for me to make vegan latkes.

Although some vegan latkes, or potato pancakes, are made with shredded potatoes, I prefer mashed potatoes as a base. Since I don't cook with oil, mashed potatoes create a more dense base for the latkas, making a fluffier, softer potato latka. 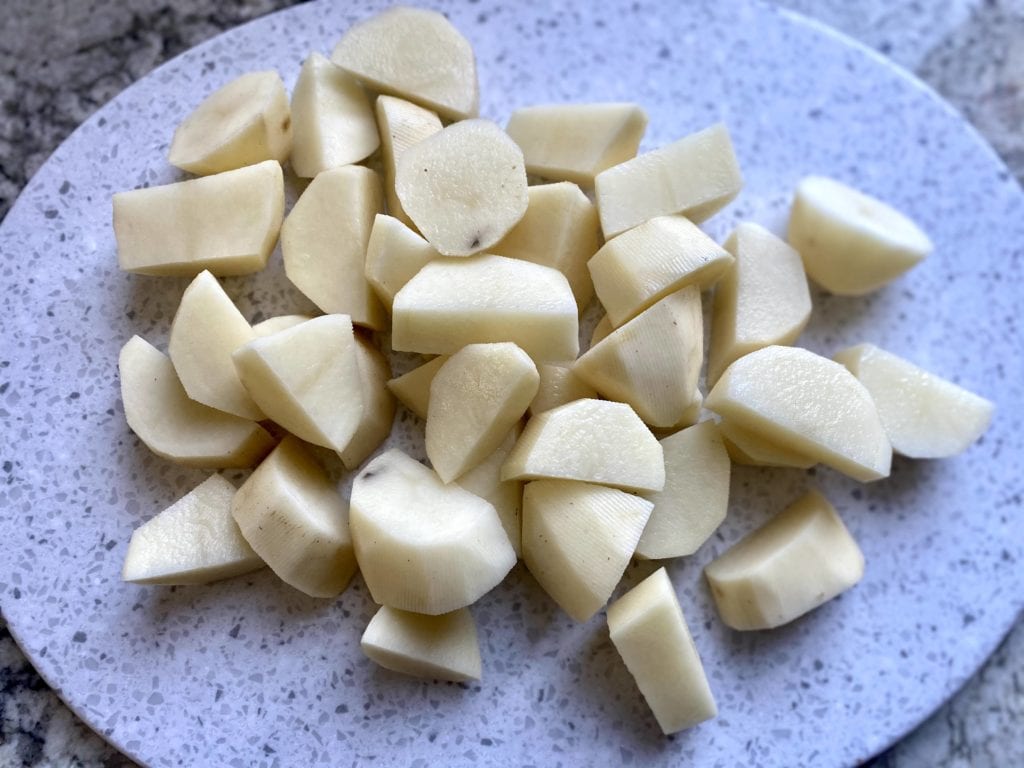 Even though I make a variety of Vegan Mashed Potatoes, my favorite is made with potatoes, plant milk, and miso paste. I love miso paste because it creates a buttery, salty flavor when mashing the potatoes.

As a fermented food, miso provides beneficial gut bacteria that help us stay healthy, vibrant, and happy; good gut health is linked to our overall mental and physical wellness.

In my opinion, miso is such an excellent ingredient simply because it adds immediate flavor to almost anything I make. Often, I use miso in sauces' s well, like dressing, but I figured why not roast my potatoes in it as well.

There are different varieties of miso: (Jo Win Registered Nurse)

White Miso (Shiro) is made from soybeans and rice and fermented for no longer than two months. Shiro (means "white" in Japanese) is light in color and sweet to mildly salty. Shiro is great gateway miso, very versatile, and provides a bit of oomph to salad dressings or sautéed vegetables.

Another mild type that is fermented for slightly longer than white miso is yellow miso (Shinshu). Yellow miso is adaptable in a wide range of recipes, as well.

If a recipe calls for dark miso, you'll want to use an aka or red miso. Russet in color, this type is made from a higher proportion of soybeans, is fermented for up to three years, and is saltier and more profound in flavor. Its full flavor is best used in hearty dishes like stews and tomato sauces. Use with caution - its flavor can overpower other ingredients.

First, you want to use white or yellow miso paste, which is lighter and enhances the potatoes' flavors rather than overpowers them.

INGREDIENTS AND HOW TO MAKE VEGAN MASHED POTATOES FOR VEGAN LATKES

WHAT OTHER INGREDIENTS ARE NEEDED FOR VEGAN LATKES? 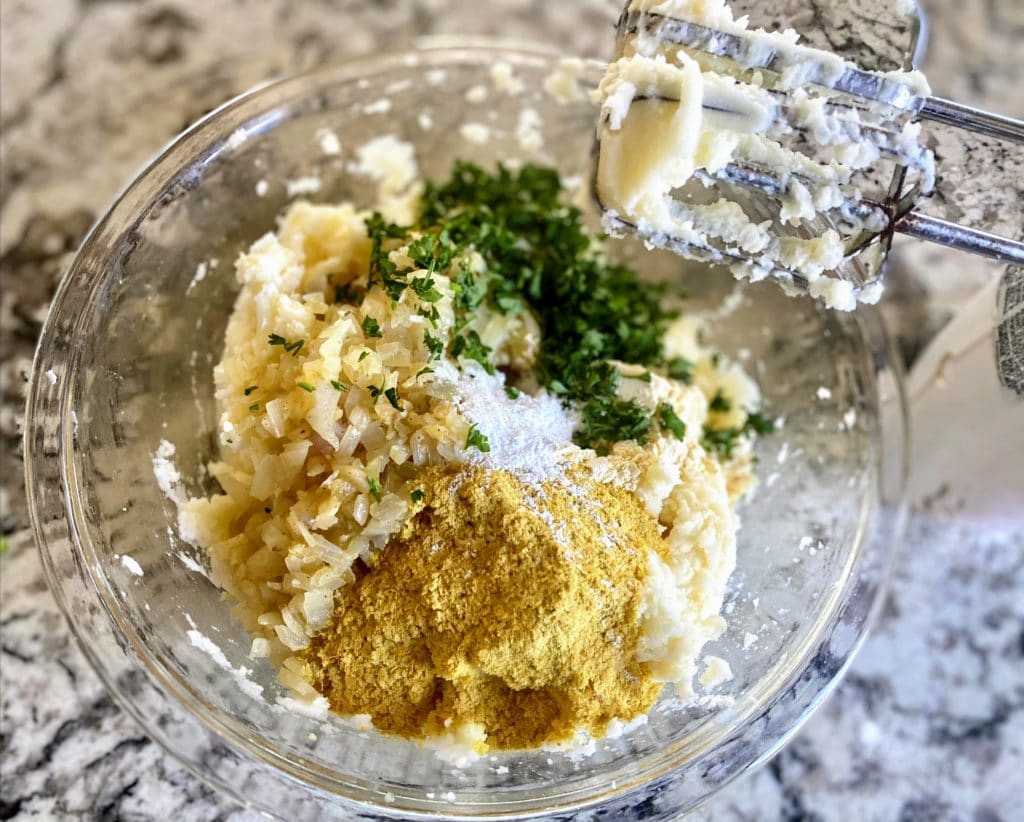 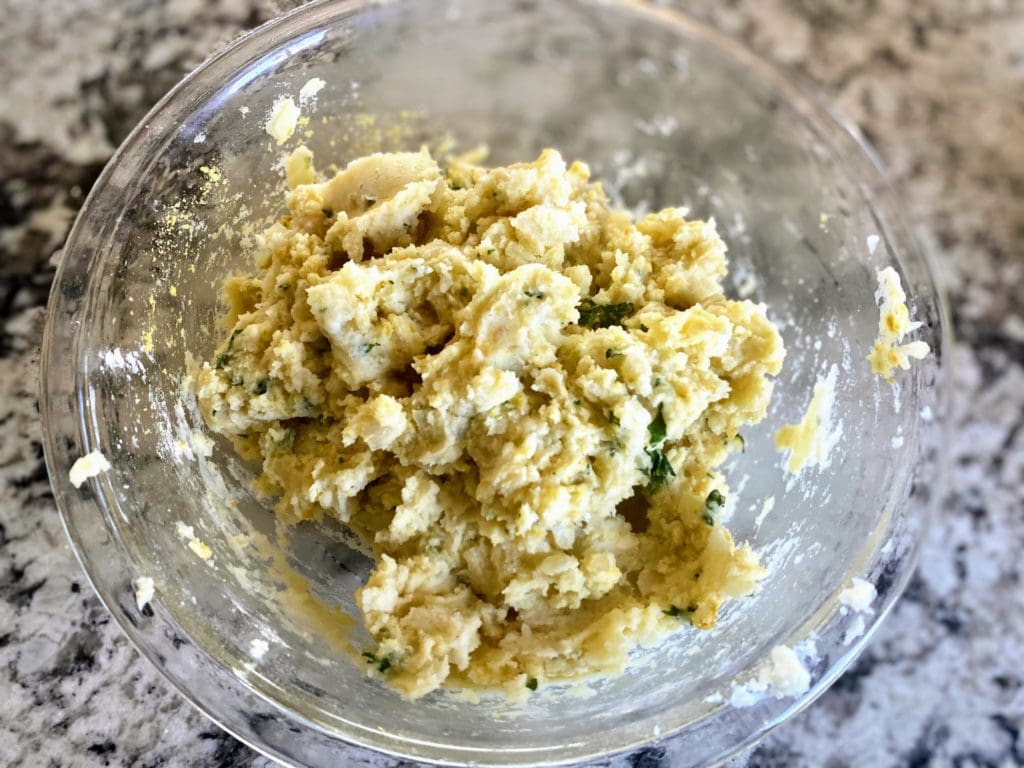 Once the ingredients are added to the mashed potatoes, stir in the remaining ingredients, ensuring everything is combined.

Then, cover and place in the refrigerator for at least an hour to allow the ingredients to chill and stiffen.

Next, using a burger press or your hands, form equal-sized patties, pressing down and rounding into a burger shape.

HOW TO AIR-FRY THE BEST VEGAN POTATO LATKES 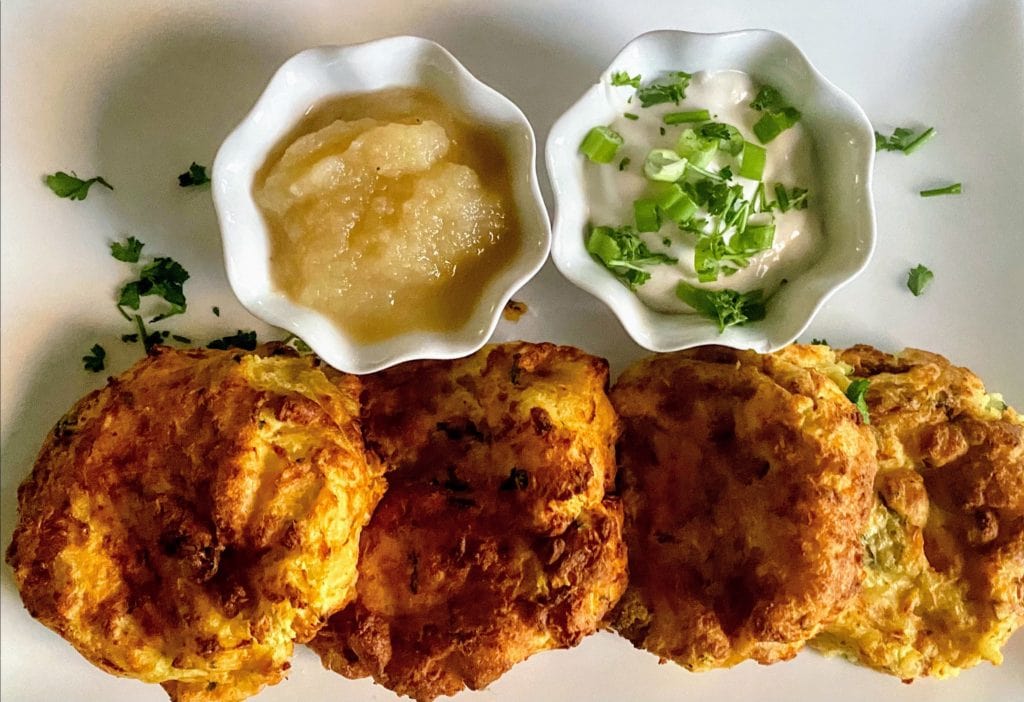 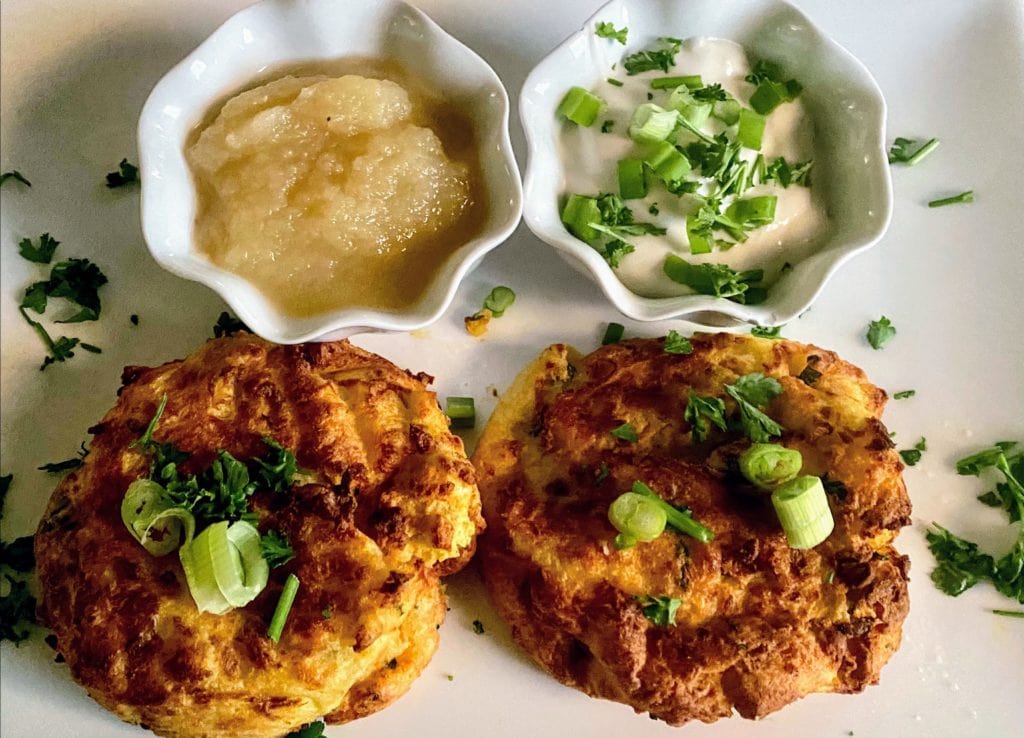 DON'T HAVE AN AIR-FRYER? NO WORRIES! BAKE VEGAN LATKES INSTEAD

If you don't have an air-fryer, the potato latkes can be baked. Similar to the air-fryer, set the oven to 400 degrees. Baking, however, takes twice as long as air-frying. Yet, you can cook all the latkas at one time when using an oven. 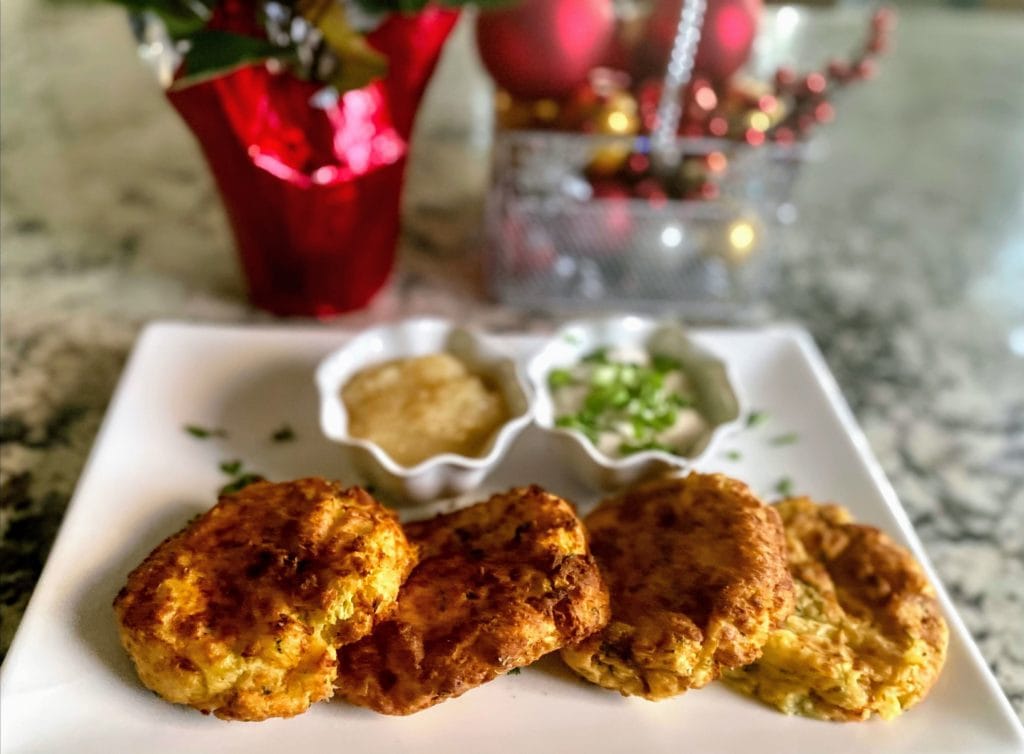 Typically, latkes are made with canola or peanut oil. In short, latkes are generally consumed on Hanukkah to commemorate the miracle of the oil lasting eight days. The story of the Hanukkah event commemorates the rededication of the Holy Temple.

Since my vegan latkes are vegan and oil-free, my recipe is a little different. So instead, I created a vegan, oil-free version, which my family loves. 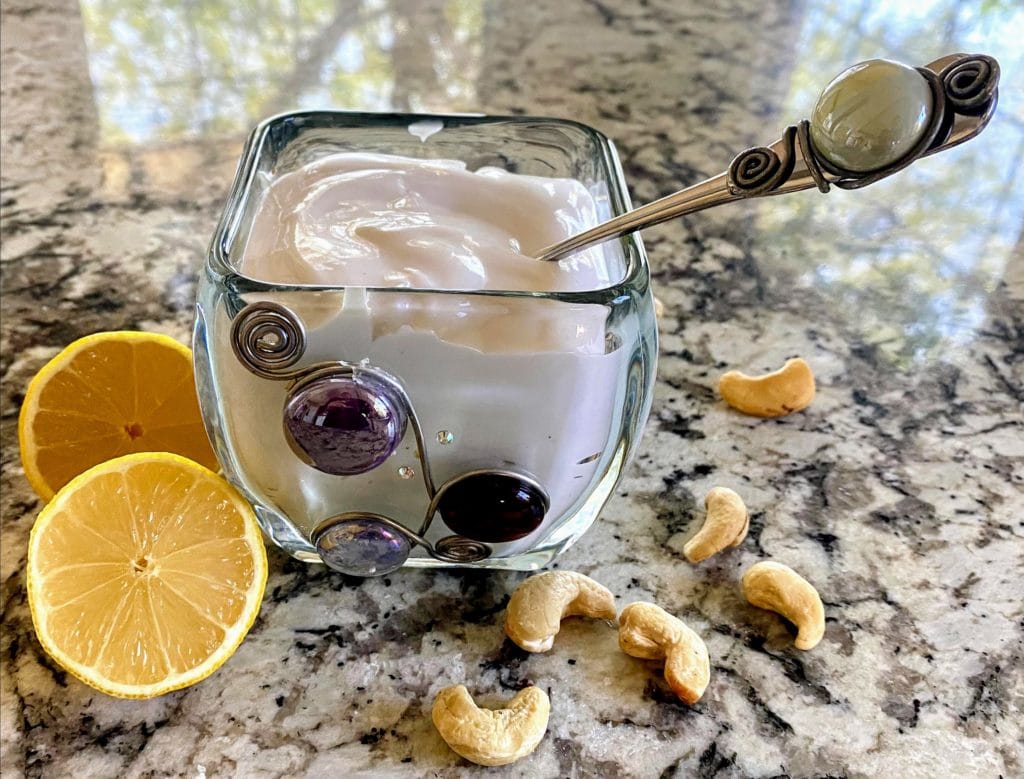 As with most of my recipes, I make my vegan sour cream. Unfortunately, I have yet to find a store-bought version I enjoy, so I make my own. 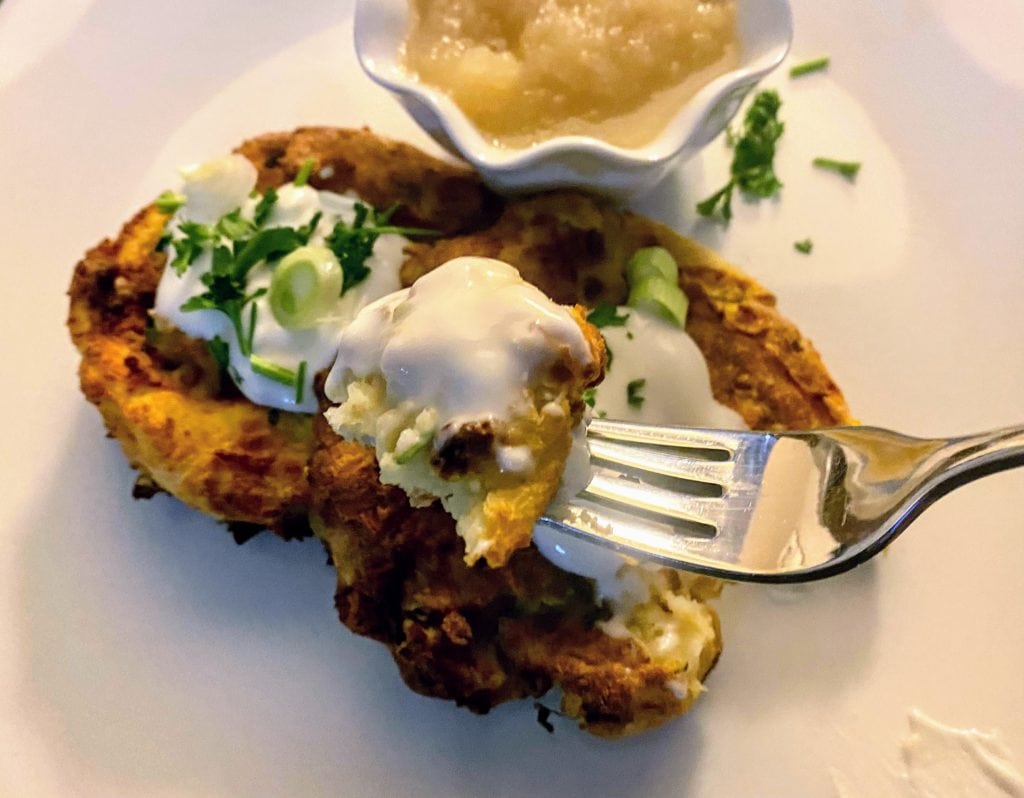 So, if you celebrate Hanukkah or enjoy potatoes, you will love vegan latkes for breakfast or dinner. Served with apple sauce and Vegan Sour Cream, vegan potato latkes melt in your mouth.

Are latkes the same as the usual hash browns?
Not really. Hash browns are just pan-fried with a light amount of oil. Latkes, on the other hand, are deep-fried.
What is another name for latkes?
Latkes are also known as potato pancakes, draniki, raggmunk, or deruny.

IF YOU LOVE LATKES, YOU WILL LOVE THESE DECADENT RECIPES 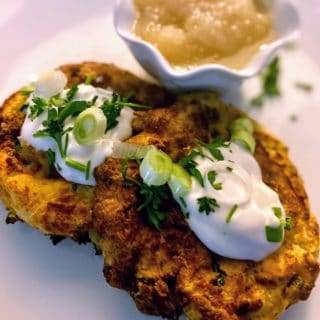 ADD THE REST OF THE INGREDIENTS

Are latkes the same as the usual hash browns?
Not really. Hash browns are just pan-fried with a light amount of oil. Latkes, on the other hand, are deep-fried.
What is another name for latkes?
Latkes are also known as potato pancakes, draniki, raggmunk, or deruny.