This unique version of vegan shepherd's pie is filled with lentils and vegetables in a savory sauce and topped with thin scalloped cheesy potatoes instead of mashed potatoes. This cottage pie is a delicious sensation you must try!

Although I'm sure someone will claim my version isn't shepherd's pie at all, I beg to differ. Since recipes are supposed to be unique versions of our favorite foods to share with others, this is my version of a vegan shepherd's pie.

Shepherd's pie is traditionally a meat and mashed potato pie. The dish has many variants, but the defining ingredients are ground red meat cooked in gravy or sauce with onions and a topping of mashed potato. Originating in England, cottage pie or shepherd's pie is comfort food taken to a different level.

Even though my vegan version of shepherd's pie differs from most, I suggest trying something new is adventurous.

As I said, I love mashed potatoes, just not on top of lentils and vegetables. So, I used my mandoline to cut yellow potatoes into ⅛ inch slices with the skin left on instead of mashed potatoes.

Then, I soaked the potato slices in ice-cold water until it was time to blanch potatoes. Not only does this prevent the potatoes from browning, but it also removes a lot of starch.

To blanch the slices, boil the potato slices for 5-7 minutes; remove them from the heat and drain them in a colander and allow them to cool.

While the potatoes are cooling, prepare the lentil meat and vegetable pie filling.

Next, saute the garlic and onion until the onions are translucent. Now, add the other vegetables and saute until the mushrooms brown. To avoid using oil, add a little vegetable broth to prevent sticking. Next, add the tomato paste, soy sauce (Tamari), and red wine. As the vegetables cook, the flavors enhance.

As the vegetables soften, combine the vegetable broth and the flour and blend in a small blender cup to avoid any clumps of flour.

Add the blended vegetable and four mixture slowly, and stir. As a result, the lentil-vegetable mixture thickens.

As soon as the mixture thickens, pour the lentil mixture into a 9X13-inch casserole pan.

For this version of shepherds pie, all you need is a few whole-foods ingredients:

Again, combine all the ingredients and blend until smooth using the same small blender cup. Then, add the mixture to a small saucepan and heat, stirring every few minutes, until the sauce thickens. Taste it to adjust for salt and pepper preference.

Now, it's time to layer the cooled, sliced potatoes and the vegan cheese sauce. Slightly overlap the potatoes in a single layer across the lentil and vegetable mixture.

Now, pour half the vegan cheese sauce over the top of the potatoes, repeat the process with another layer of potatoes, and end with the rest of the cheese sauce.

For an added crunch and cheesy goodness, sprinkle the top with Vegan Parmesan Cheese. As a result, baking the vegan shepherd's pie uncovered provides a crunchy, browned top.

One of the best parts about this recipe is it can be made ahead of time, which is always a bonus at my house. If made ahead, it will last 2 days in the refrigerated, covered, before cooking.

Vegan shepherd's pie can be cooked, frozen, and then thawed and reheated.

To cook the vegan shepherd's pie, cook at 425 degrees for 40 minutes until brown on top!

Are lentils a good source of protein?

Lentils are good source of protein. A ½ cup serving of cooked lentils provides about 12 grams of protein. With such high protein content, you are sure to be fuelled up all day long.

Which is healthier, beans or lentils?

Lentils have a lower phytate content than beans and are lower in indigestible sugars, which means that they are less likely to lead to flatulence than beans. Beans are also slightly higher in carbs than lentils, though their dietary fiber content can vary between legumes.

Are lentils a bean or a grain?

Technically, lentils are considered a grain legume is known as a pulse, which means they are harvested for their seeds. Lentils are tiny little lens-shaped seeds and come in many different colors. From red to brown to green to black.

Even though my vegan shepherd's pie version is a bit different, the final product is to die for.

If you love comfort food, the next time you want to try something new, try my version of shepherd's pie.

If you love this vegan shepherd's pie recipe, give us a 5-star review and comment below. We would love to hear from you! 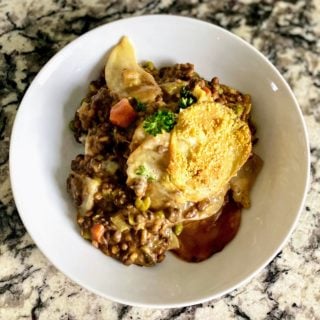