Hearty, thick, and full of veggies, vegan split pea soup is filling, delicious, and easy to make. Make it on the stovetop, in the Instant Pot or throw everything in the crockpot and walk out the door.

As soon as the temperatures get cooler outside, I crave hot, savory soups. I love soup, regardless of the type, and the thicker and creamier the soup, the better. Vegan crockpot split pea soup, for example, is one of my favorites because not only is it thick and creamy, and it's loaded with veggies.

Similar to lentils, split peas are high in fiber, and protein and very low in fat. For that reason, eating split peas as well as lentils is highly recommended on a plant-based diet.

Despite my love for my crockpot, I decided to make my vegan split pea soup recipe on the stovetop. Since I made the soup on Sunday, I didn't need to use my crockpot while meal prepping.

But, using an Instant Pot is even easier! Regardless of your preferred cooking method, the soup tastes fabulous any way it's cooked.

But, if you want to use your crockpot instead, it is just as easy as the stovetop or Instant Pot version. The benefit of the crockpot, which I find pretty appealing, is throwing everything in the base, turning it on, and walking away.

If you opt for the stovetop method as I did, it is just as simple. The only difference is a quick step-by-step process and occasionally stirring while the soup simmers. Either way makes a huge pot of soup for lunch, and dinner or packs well in containers for work.

This vegan split pea soup recipe will fill you up with six vegetables without any oil or anything added other than a plethora of veggies and organic vegetable broth. This soup is more like a stew!

Once cooked through, the split peas become creamy and break down, making a thick broth full of vegetables. Each bite is heartier than the last; the more you eat, the happier you will feel.

If you're following a plant-based lifestyle, a variety of vegetables is a must, and this soup packs it all in one bowl. You can even hide those "not so favorite veggies" in the soup without any little ones knowing.

And don't forget to serve the vegan split pea soup with some crusty bread! YUM!

Why aren't my split peas softening?

It depends on several factors. It could be the peas or the water. Most of the time, if the peas are very old, they become dried out and won't soften.

Can you overcook split peas?

Not necessarily. You won't overcook split peas unless you burn them. Just add more water when the soup becomes too thick and keep cooking.

Do split peas need to be soaked before cooking?

If you are craving a rich and hearty soup recipe, give this vegan split pea soup a try. Honestly, I could eat soup every day of my life. Soups on!

Other Vegan Soups to Try

If you love this vegan split pea soup recipe, give us a 5-star review and comment below. We would love to hear from you. 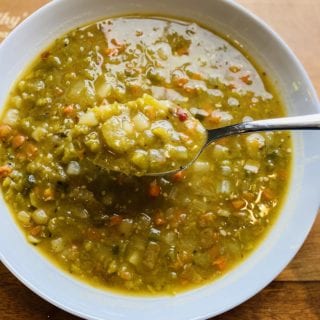 Kathy Carmichael
Hearty, thick, and full of veggies, vegan split pea soup is filling, delicious, and easy to make. Make it on the stovetop, in the Instant Pot or throw everything in the crockpot and walk out the door. Dinner will be waiting when you get home.
4.48 from 17 votes
Print Recipe Pin Recipe
Prep Time 10 mins
Cook Time 1 hr 30 mins
Total Time 1 hr 40 mins
Course Soups
Cuisine American
Servings 10 servings
Calories 235 kcal