If you're looking for a quick and easy recipe, this JUST Egg quiche recipe is elegant yet simple. Filled with savory Mediterranean flavors, this is a perfect brunch, lunch, or weeknight dinner.

When JUST Egg introduced their egg replacement product, I tried it and wrote a review. My family loved it, but I was still on the fence about enjoying the taste. So, today I tried my hand at a JUST Egg quiche.

I've never liked eggs much, even before becoming plant-based. So, it tasted too much like an egg. However, the texture was a bit thinner, creating what I consider a "runny" egg substitute.

Over time, however, I've started experimenting with using JUST Egg for various recipes, and I figure out how to tweak it a little to make it firmer and more desirable texture and taste.

For those who prefer to avoid JUST Egg, I also make a Mediterranean vegan quiche from tofu. But, if you're looking for a quick and easy alternative to a fabulous recipe, this JUST Egg quiche is calling your name.

If using a prepared frozen pie crust, allow it to thaw for 20 minutes. Also, use a knife to poke several holes in the bottom before adding any ingredients. This helps to vent the crust.

How to Make the Quiche

First, begin by chopping the vegetables and sauteeing them in a skillet. If necessary, add a little vegetable broth or water if the vegetables start to stick to the pan.

Then, add the spinach and allow it to wilt into the cooked vegetables. If you need extra moisture to help the spinach wilt, add a little more vegetable broth or water, and stir to include the spinach.

In the meantime, prepare the egg mixture.

The trick to making JUST Egg into the perfect quiche filling it needs flour, baking powder, and nutritional yeast. And, if you want it to taste like egg, add a little black salt.

Next, whisk the ingredients together until smooth.

Once the crust is thawed (frozen crust), or the homemade crust is placed in the pie pan, and holes are poked in the bottom, pour the cooked vegetables into a prepared pie crust.

Although some recipes suggest cooking the crust before adding the quiche ingredients, it isn't necessary.

Or, make your own crust or choose to make a crust-free quiche.

For additional color, add sliced grape tomatoes. Gently place them on top of the egg mixture. Then, bake in a 350-degree oven for 55 minutes, uncovered.

Once removed from the oven, allow the quiche to set up for about 10 minutes before cutting into slices.

How much JUST Egg equals an egg?

On its own, not really. It does, however, have a similar texture. Add black salt, flour, baking powder, and nutritional yeast to make it taste more like eggs and give it a firmer texture.

Is JUST Egg a good substitute in baking?

Yes, not only does JUST Egg function as a binder, it provides moisture and a fluffy texture that rivals chicken eggs, minus the cholesterol!

This quick JUST Egg quiche recipe is so easy to make, you will LOVE this new recipe!

Recommended Salads to Serve with Quiche

If you love this quiche recipe, let us know! Please give us a 5-star review and a comment below. 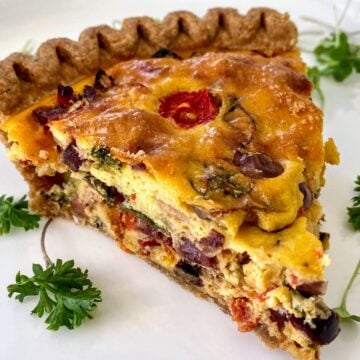