Recently, on my blog feed, someone requested a Po Boy sandwich veganized. So, after some experimentation, I decided to transform cauliflower into vegan mock shrimp. Although I've made Vegan Crab Cakes from tofu, I chose cauliflower as my inspiration to make it crunchy on the outside and soft on the inside. I love cooking with cauliflower, so why not make a Louisiana creole cauliflower to replace the shrimp?

A traditional  Po Boy sandwich, although simple in execution, requires very few ingredients. The combination of the few ingredients, however, tastes incredible. As with many of my sandwiches, I removed the excess bread from the center of the french loaf for an extra-crunchy exterior. This reduces the number of carbs in a sandwich but provides more room for the goodies inside.

What is a Po Boy Sandwich?

My vegan Po boy sandwich is packed with cauliflower and other whole-food ingredients and baked rather than fried. And my version also contains a secret vegan creole cashew mayo that brings it all together.

During the Street Car Driver's Strike of 1929,  the Martin brothers invented the PO-boy sandwich, feeding hungry strikers. These hearty, large sandwiches provided the men with a satisfying meal.

Then, when strikers approached to buy the sandwiches, they yelled out, "here comes another poor boy." As a result, this famous sandwich developed into a New Orleans tradition!

How to Bread and Cook the Cauliflower

After removing the core from the cauliflower, cut it into bite-sized florets.

Then, it's all about dredging; dip a cauliflower floret into the plant milk, then the flour, back in the plant milk, and finish in the bread crumb mixture. Once dipped, spread the cauliflower on a single layer on a prepared baking sheet with parchment paper or a silicone baking mat.

Once the cauliflower is baked, prepare the other sandwich ingredients.

How to Assemble the Sandwich

Begin by cutting the french bread lengthwise. Next, pull some other bread from the interior of the French Bread. But be careful not to break through the crust. Then, broil on low in the oven for 5 minutes, carefully watching to avoid burning.

What is the difference between a sandwich and a Po Boy?

Unlike the chewy Italian loaf that most subs serve, the Po' Boy is served on a French baguette with a thin, crisp crust and a soft, light interior.

What makes a Po Boy vegan?

What can be substituted for creole seasoning?

The Cajun seasoning blend will be a perfect substitute for Creole seasoning if you find yourself in a bind. Another option is to use the component ingredients - paprika, cayenne, garlic powder, onion powder, salt and pepper, dried oregano, basil, and thyme.

So, the next time you're craving a Po Boy, try a vegan Po Boy Sandwich! 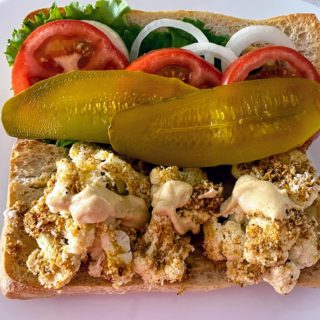 Preparing the Cauliflower and Dredging Bowls