Welcome fall with this healthy vegan apple cider donut cake! Apple donut cake is a healthy version of a day at the cider mill. This dense bundt cake is oil-free and nut-free, with a gluten-free option topped with fresh, hot cinnamon apples.

I almost panicked when asked to bring a dessert to a friend's party. Despite my husband's love for anything sweet, I don't really like dessert. But, even though I'm not an avid dessert lover, I know how to veganize recipes to make them taste just as good as the real deal.

For instance, the original recipe includes a variety of non-vegan ingredients and some unnecessary butter and sugars.

To keep it as whole foods as possible and as healthy as possible, I altered the recipe, and the results were fabulous. I also added an apple topping instead of buttery icing to my friend's cake recipe.

Because the first ingredient in my friend's recipe is yellow cake mix, I focused on finding a healthy vegan yellow cake mix. I didn't realize, however, that many cake mixes are accidentally vegan. But, I wanted a whole foods mix to keep my recipe as healthy as possible.

Although vegan, Duncan Hine's Classic Yellow Cake Mix contains oils and other unhealthy ingredients. See the ingredients as a comparison below.

How to Make the Cake

For this vegan apple cider donut cake, all you need is the ingredients, a bowl, and a spoon. An electric mixer is not required.

Then, pour the ingredients into a non-stick bundt pan. If you don't have a non-stick pan, another way to cook the cake without cooking spray or oil is to line the pan with parchment paper before pouring the batter into the pan.

While the cake bakes in the oven, prepare the apple topping for the vegan apple cider donut cake.

What is a flax egg?

A flax eff is a combination of flaxseed meal and water. For each flax egg, combine 1 Tablespoon flaxseed meal with 3 Tablespoons of water; then place in the refrigerator to thicken for 15-30 minutes.

What is a substitute for flax egg?
Which apples are the sweetest?

Other Vegan Desserts to Try!

If you love this vegan apple cider donut cake, give us a 5-star review and comment below! We would love to hear from you! 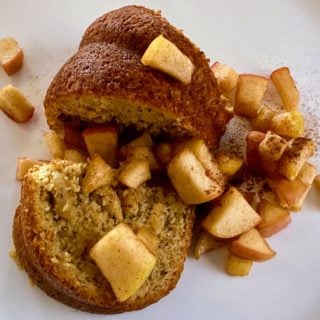