When I went shopping this week, I found the most beautiful honey crisp apples for my apple cinnamon bread recipe. Although I don't care for sweets much, there is something special about apple cinnamon bread. Even though it's technically bread, it screams dessert at the same time.

My family loves anything with apples and cinnamon. So, as a result, I created a whole-foods, refined sugar-free apple cinnamon bread for the sweets lover who lives at my house.

Regardless of what apples you choose for baking apple bread, remember to pick organic apples because they are always on the dirty dozen's fruit list to buy organic.

Of course, this apple cinnamon bread is oil-free as well as refined sugar-free.

How to Make Apple Cinnamon Bread

First, combine all the dry ingredients in one bowl and stir together to ensure the baking powder and baking soda are mixed with the flour.

Then, add the wet ingredients, except for the apples. Once the apples are peeled and chopped, toss them in a little lemon juice to prevent them from turning brown.

Next, fold in the chopped apples, reserving ½ cup to add to the bread's top before cooking. To add a beautiful cinnamon flavor to the bread, I also sprinkle with extra cinnamon before baking.

For an added apple cinnamon topping, add the reserved chopped apples and place them randomly on top of the batter, pushing the pieces gently into the batter.

Then, sprinkle the top with cinnamon before placing it in the oven.

To make sure the apple cinnamon bread recipe is cooked all the way through, insert a knife into the middle of the baked bread. If the knife comes out clean, allow the bread to cool before removing the parchment paper or bread.

Slice the bread and serve with your favorite salad or soup, or have a large piece for breakfast with a cup of coffee or your favorite tea.

How do you replace eggs in recipes?

Are all types of apples good for baking?

Most sweet apples are good for baking. There are a few apples that don't make the cut. While great for snacking, Gala, Fuji, and Red Delicious is the most common apples that won't hold up in the oven and will give you a watery-mushy bread, pie, tart, or cake.

Try this apple cinnamon bread recipe for breakfast, or as a side for your favorite salad or soup. Or, serve as a dessert this fall!

Other Great Vegan Recipes to Enjoy!

If you love this apple cinnamon bread, give us a 5-star review and comment below. We would love to hear from you! 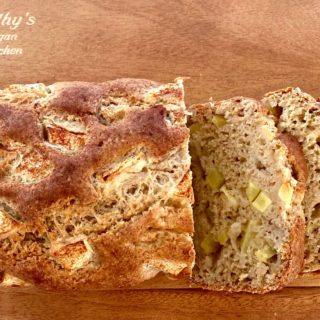