Today, I decided to make a vegan Nicoise salad veganized from one of my favorite childhood salads. My mom made a Nicoise salad when I was younger, which she coined a fancy French salad. Whenever she prepared her salad, we ate "French" food, so we were fancy. Although similar to my mom's recipe, my vegan Nicoise salad is fish-free with a vegan twist.

Traditionally, Nicoise salad is prepared with various vegetables and topped with canned tuna, anchovies, or both. It is a specialty of the French province of Cote D'Azur, with the salad named after the city of Nice. Since this is a vegan version, I chose similar vegetables in my mom's recipe, but I decided on hearts of palm to replace the fish.

My vegan Nicoise combines cooked and cold vegetables and a shallot vinaigrette like my mom's salad recipe.

Even though any vegetables work well in this salad, I picked the vegetables my mom served in her recipe.

Because the vegan Nicoise salad varies from the original version, I combine both raw and cooked vegetables in my salad recipe.

First, I'm all about saving time. So, I use one pan for two different tasks. For instance, it takes 10 minutes to boil baby red potatoes and 5 minutes to blanch green beans.

Once the potatoes boil for 5 minutes, throw the green beans in the pot for the last 5 minutes.  And then cook both at once.

Then, drain the potatoes and green beans simultaneously and soak both in ice water to stop cooking.

As soon as the potatoes and green beans cool, it's time to create the vegan Nicoise salad!

Begin with the greens mixture and evenly distribute the vegetables, white beans, hearts of palm, and other ingredients.

I served vegan Nicoise salad as an entree with vegan cornbread. But, if you serve this salad as a side dish, I suggest vegan clam chowder or sheet pan tomato soup.

What does Nicoise mean in French?

Niçoise comes from the French phrase à la niçoise and means “of Nice,” a French city on the Mediterranean coast. Other things can be described as niçoise (like the olive), but it is best known as the name of the salad associated with Nice, France, where it is said to have originated.

When was salad Nicoise invented?

Salade niçoise has been known in the United States since at least the 1920s when a cookbook for hotel chefs included two variations.

What is traditional Nicoise salad made of?

Salad Niçoise (pronounced nee-suahz) is essentially a French-composed salad, much like our American Cobb salad, but with tuna, green beans, and potatoes, instead of chicken, bacon, and avocado.

What is vegan Nicoise salad made of?

Instead of tuna fish, vegan Nicoise salad has hearts of palm.

Savor the season with this vegan Nicoise salad full of summer green beans, hearty potatoes, and loads of vegetables!

If you love this vegan Nicoise salad recipe, give us a 5-star review and comment below. We would love to hear from you! 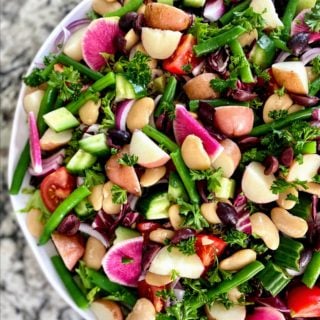