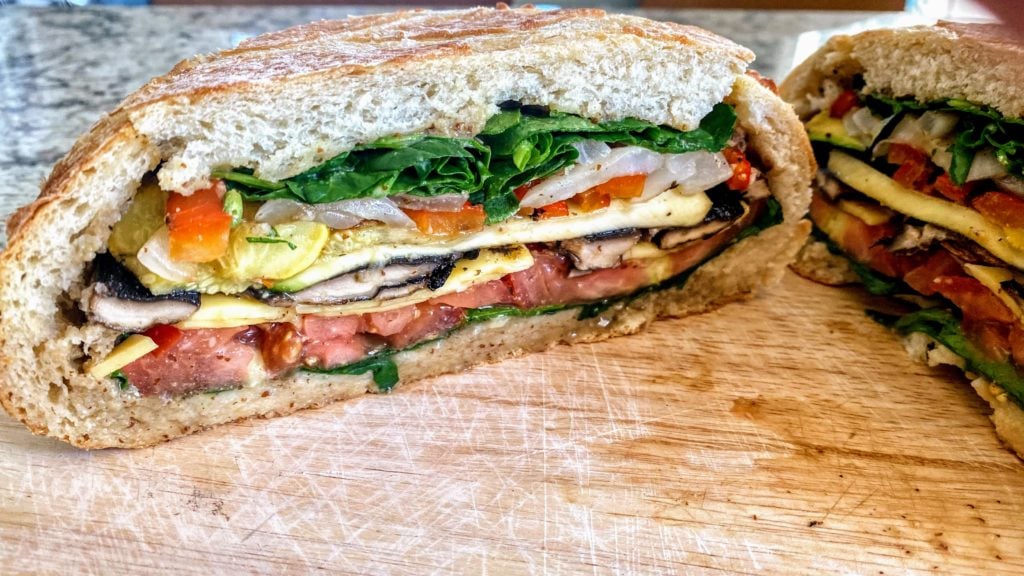 I first saw a muffuletta sandwich in Martha Stewart’s magazine years ago. Although her version displayed layers of meats and cheeses, it sparked a vegan idea. I eat an array of vegetable sandwiches, but I figured I could layer vegetables if Martha layered meat and cheese. So, I went to the farmers' market to find colorful vegetables to make my muffuletta sandwich.

Luckily, a beautiful round-shaped loaf of bread caught my attention. And then my imagination took over.

Nobel Bread, a local deli and bakery, bakes all its vegan bread from scratch.  Luckily, they sell their bread at the farmer's markets each weekend. As a result, most of their bread does not contain oil or fat, just water, yeast, and flour.

For this particular sandwich, I selected a large round of sourdough bread.

The Muffuletta Sandwich is a sandwich with very little bread

Since I remove the inside of the bread, this muffuletta is technically low in carbs. Instead of filling the sandwich with meats and cheeses, I layered cooked and raw vegetables. However, the purpose of the bread is to hold all the vegetable layers in place and create a crunchy structure to house the vegetables.

The only bread consumed is the crusty outside. And what's better than the crusty outside of bread?  To avoid wasting the inside of the bread,  reserve it for dipping into stews and soups. Why waste the extra bread? Instead, use it for other recipes like bread crumbs.

First, cut a hole in the top of the bread and remove the center. 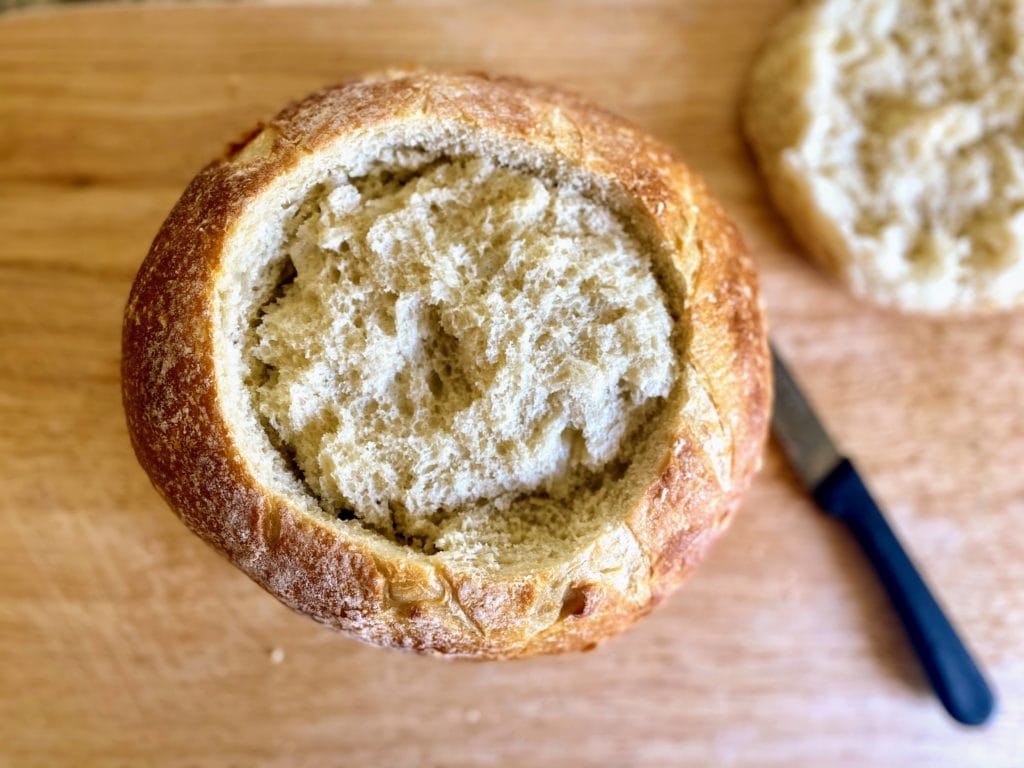 Next, using your fingers, remove all the bread inside the bread, digging into the sides. Do not, however, break through the crust on the sides ott the bottom of the loaf. 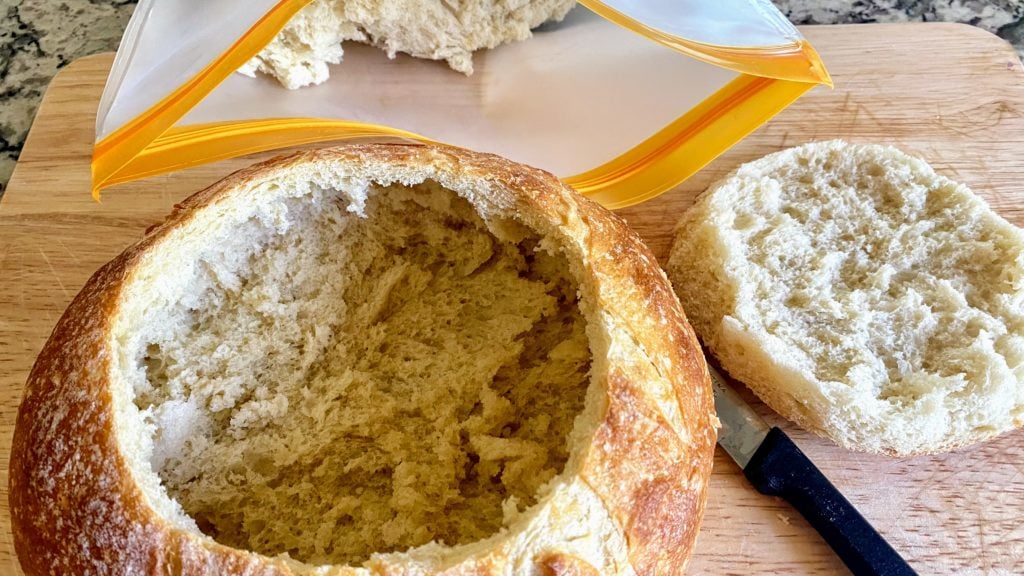 The Cooked and Raw Ingredients 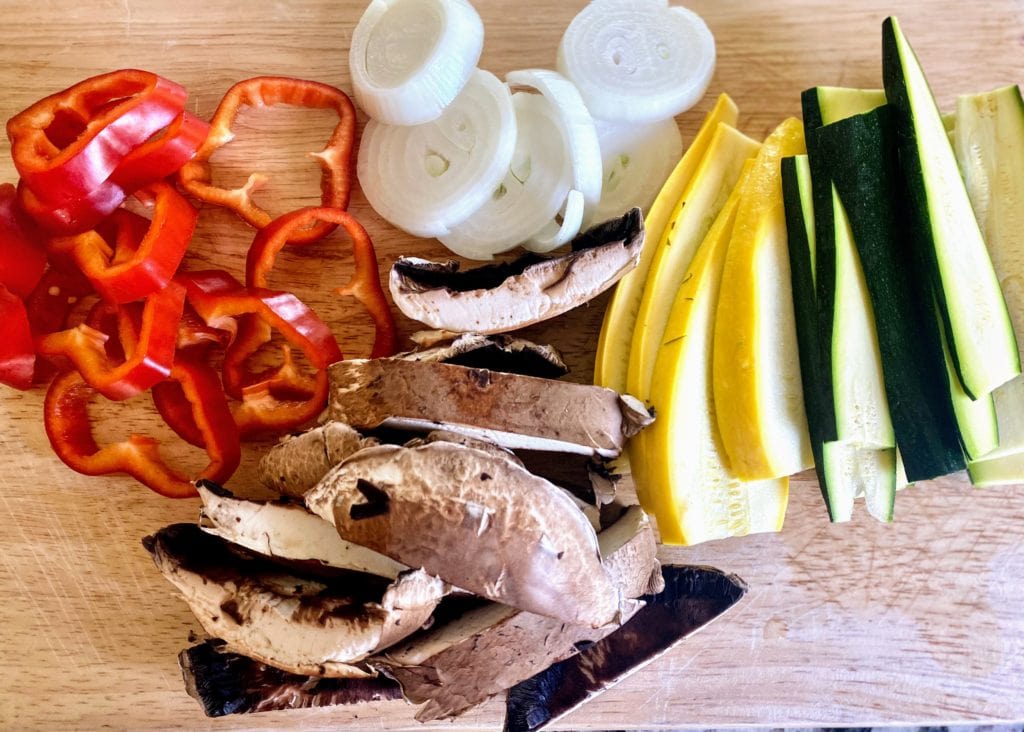 I chose many fresh vegetables; the more colorful, the better. 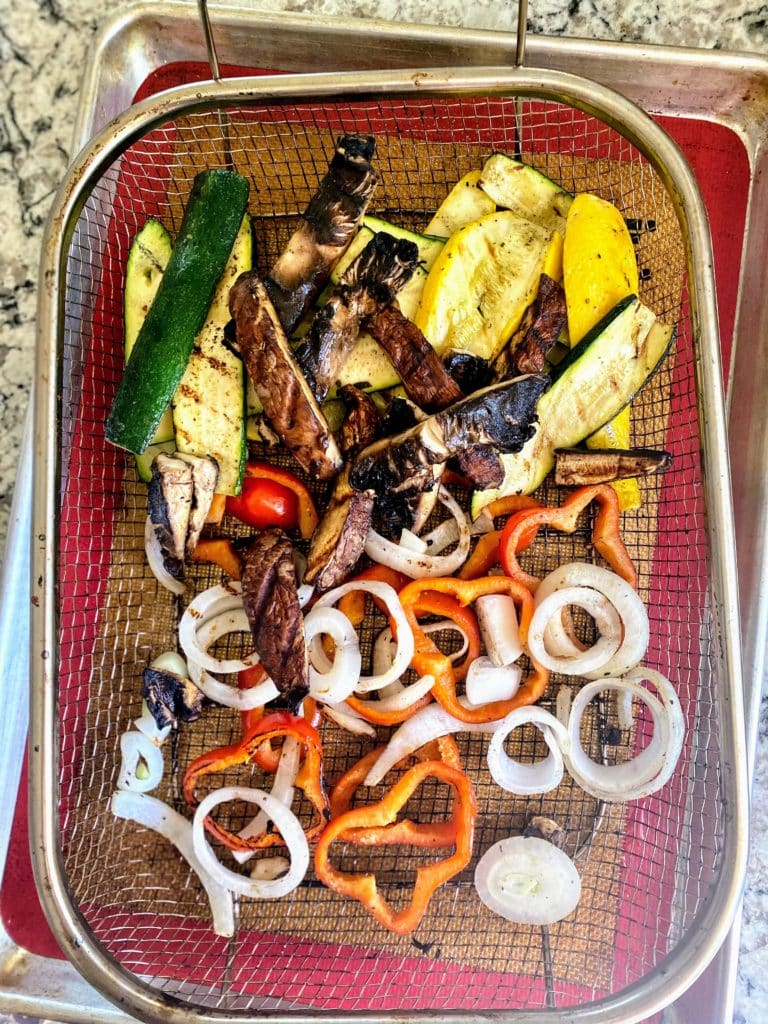 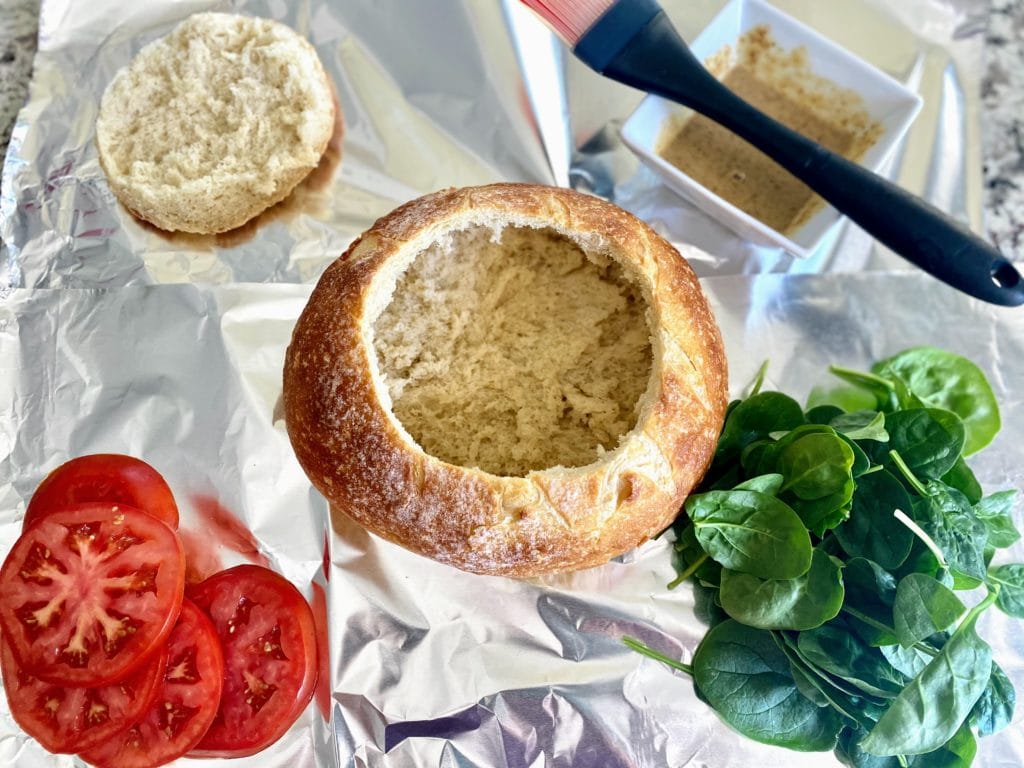 Although I prefer grilled vegetables, sauteeing the vegetables offers an alternative for weather issues. I recommend grilling in the event the weather is conducive. You can also marinate the vegetables in advance if you plan to grill them. Ensure they are thoroughly cooked, so your vegetables are not too moist, avoiding soggy bread.

Layering the vegetables in the Muffuletta Sandwich

Once the bread is removed from the loaf, press the raw spinach into the base of the hollowed-out bread. Be sure to pack into the sides, creating a base of spinach. 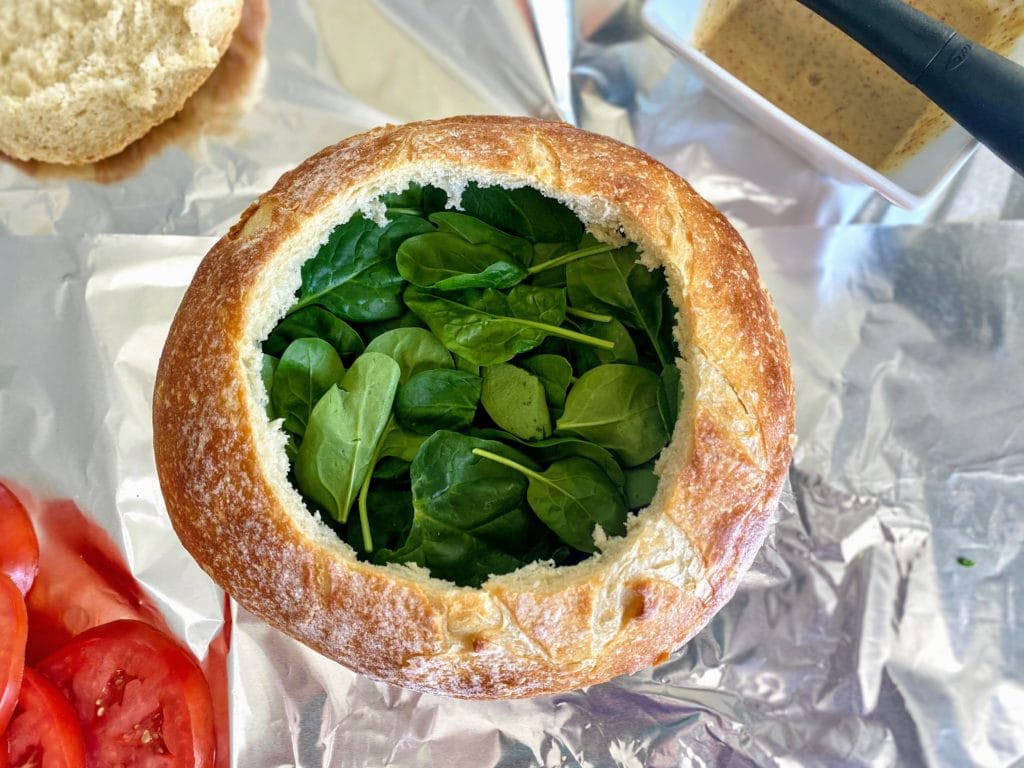 When the spinach is packed down, add the tomatoes, slightly overlapping each slice. 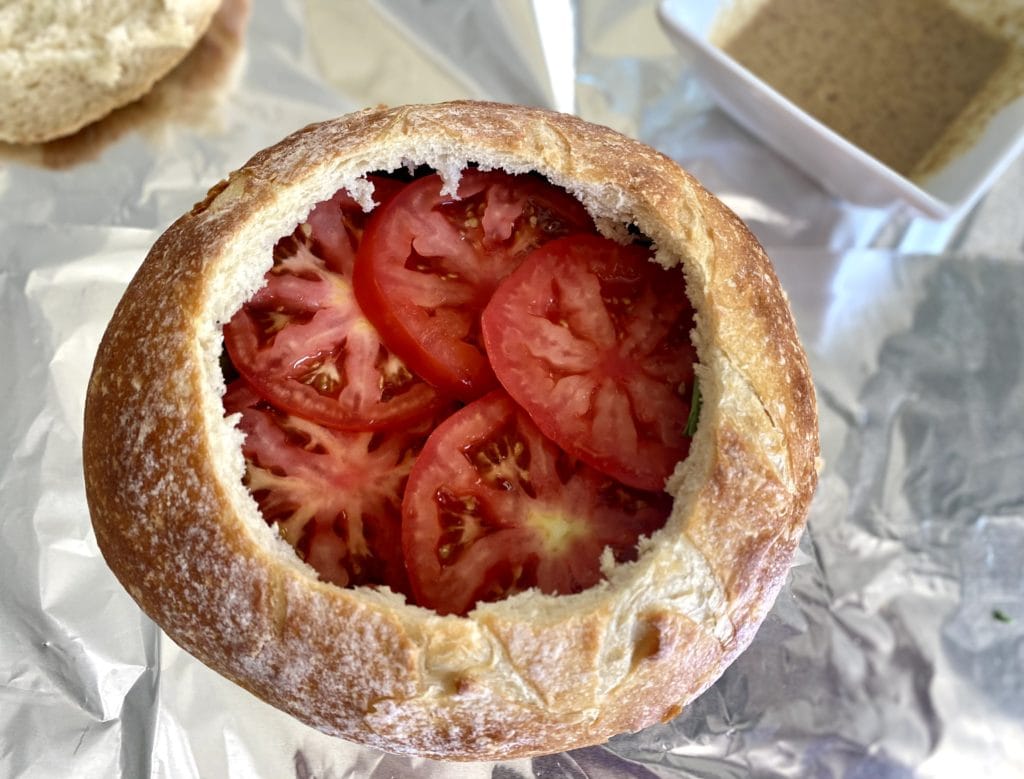 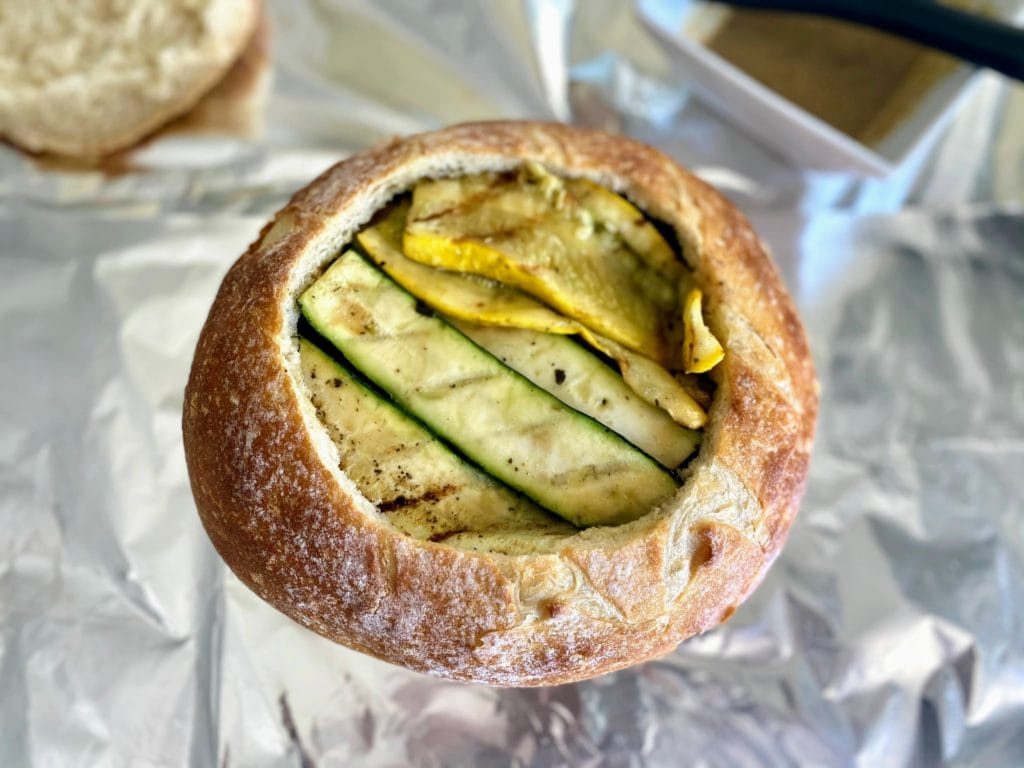 Even though the vegetables fill to the top, add another layer of spinach, push it into the hollowed-out bread, and brush a final coat of dressing on the inside of the cut-out bread top. 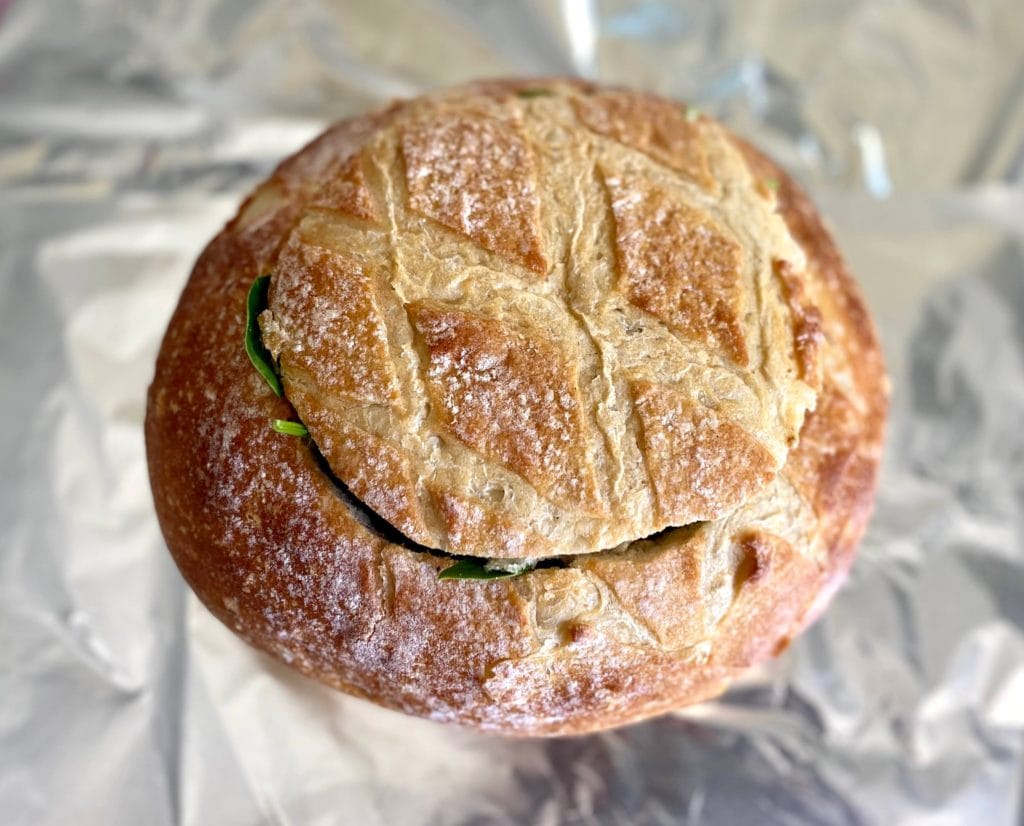 Finally, wrap in aluminum foil, and bake in an oven for 20 minutes in a 400-degree oven. Baking the sandwich makes it crusty on the outside and warm and inviting on the inside, yet feel free to eat it cold if you prefer.

To serve, unwrap the foil, and using a bread knife, cut wedges of Muffuletta Sandwich to enjoy! 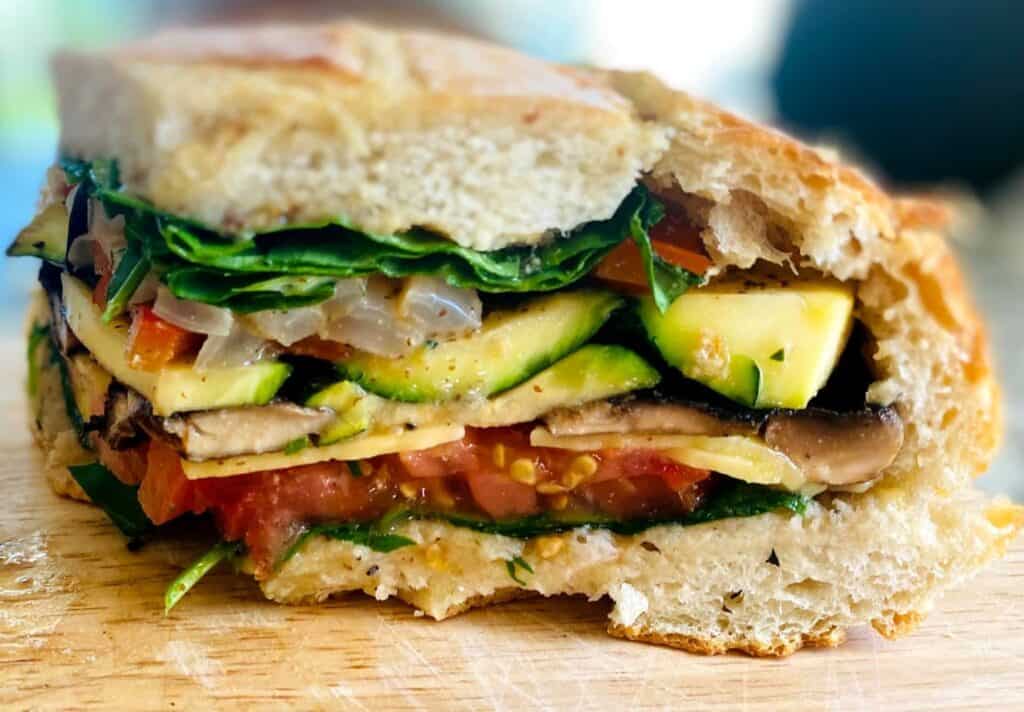 Do you love vegan sandwiches? Here are some beautiful sandwiches to try 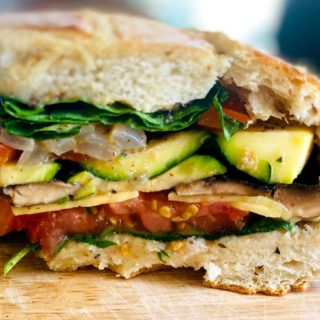 Kathy Carmichael
The Muffuletta Sandwich is beautiful, loaded with vegetables, and dressed with a tangy fat-free dressing. Eat it hot or cold, you choose. Crunchy on the outside and warm and comforting inside, this sandwich is a low-carb vegan delight.
5 from 5 votes
Print Recipe Pin Recipe
Prep Time 15 mins
Cook Time 20 mins
Total Time 35 mins
Course Sandwiches
Cuisine American
Servings 8 servings
Calories 205 kcal