While making a batch of seitan, I decided to explore the world of seitan bacon. Since I've never actually tried making seitan bacon, I figured I should also be the pioneer in air-frying it instead of baking or pan-searing it.  In fact, the only seitan bacon I've ever eaten was at a vegan restaurant. Although memorable, the fried restaurant version was greasy, so air-frying it without oil seemed logical.

I often cook coconut bacon, so I used my go-to bacon marinade but replaced coconut with seitan. To my surprise, the bacon got crispy and tasted fabulous in the middle of my seitan BLT sandwich.

Even though the seitan bacon literally took 7 minutes to cook in the air fryer, I made the seitan from scratch. Despite the cooking time of 1 ½ hours, the dough is relatively easy to make. And, the cooking is really only a slow boil, so it doesn't take much effort. The time and magic, however, is waiting for the bacon or any seitan recipe to marinate.

As a golden rule, I suggest allowing the seitan to marinate, in whatever marinade you choose, for 1-2 days. The longer you can leave it marinating, the better. As a result, the seitan absorbs the marinade like a sponge, enhancing any flavor you throw its way.

Another bonus to making seitan is that the recipe makes 2 pounds of seitan, divided and marinated differently, yields a ton of different recipes from one batch.

Remember, though, vital wheat gluten, the main ingredient of seitan, is not gluten-free. In fact, it's the complete opposite. So, stay clear if you are gluten-free. 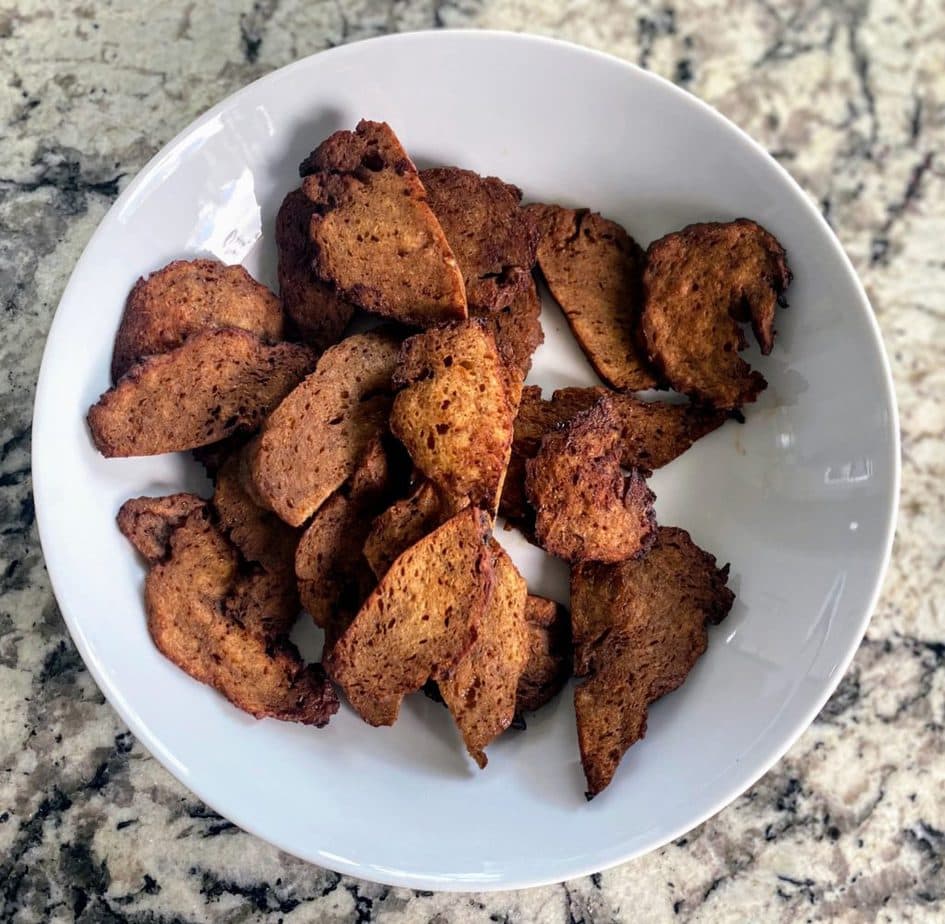 Seitan bacon packs in the protein with very few carbs

On the other hand, as a meat alternative, seitan packs the protein and has little to no carbohydrates.

According to Maggie Moon, author of Mind Diet, “Seitan contains more protein than most other vegan protein sources," says Michalczyk. For example, 100 grams of seitan has around 22 grams of protein, while an equivalent amount of firm tofu has only 7 grams. However, seitan isn't a complete protein—it lacks the amino acids lysine and threonine, says Michalczyk. As with other incomplete vegetarian protein sources, she suggests pairing seitan with other foods like beans to make sure you're getting enough of the essential amino acids our bodies need to run properly.

“Seitan also is a good source of iron, selenium, and phosphorus, giving it a little more nutrient credibility than just its protein content,” says Michalczyk.

Plus, unlike other products that are made with wheat, it's relatively low in carbs, Michalczyk adds (5 grams of carbs per 100-gram serving). This is because most of the carby starch content gets washed away during processing. So, it’s a pretty good option for low-carb diets. However, watch out for added sugar content in prepared pre-marinated products, which could rack up that carb count. 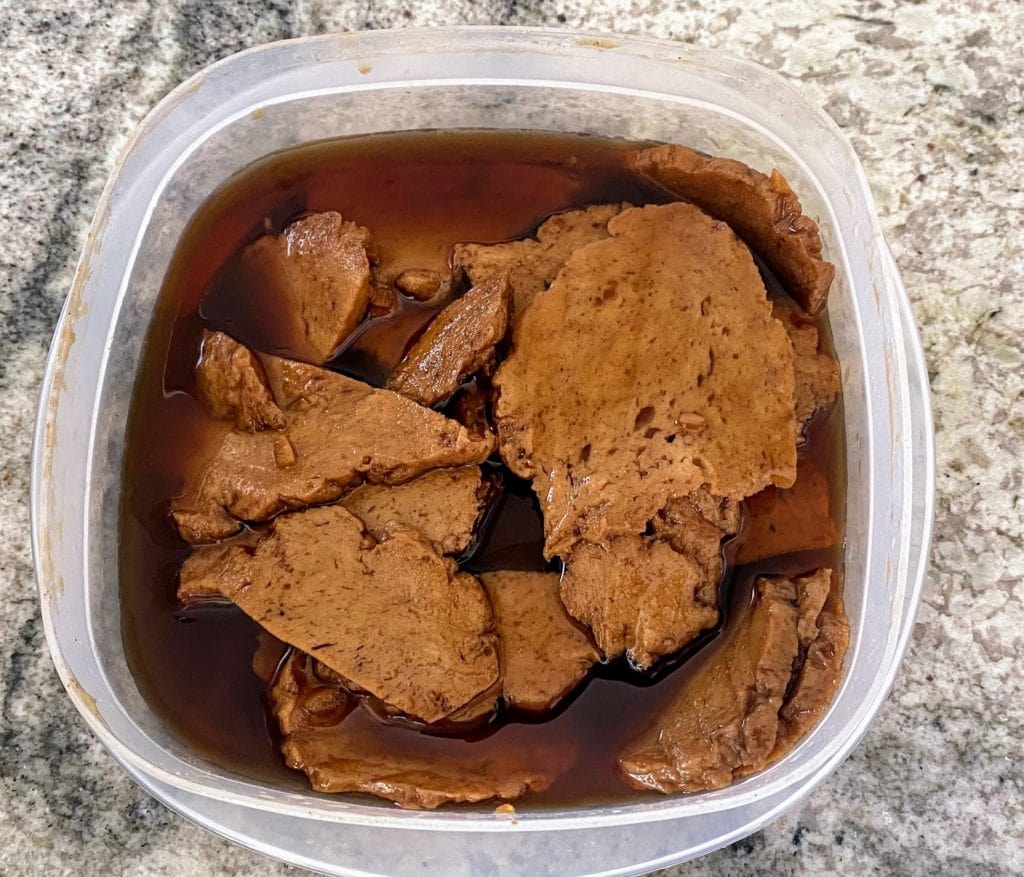 Once cooked and cooled, slice the seitan thinly or in strips, depending on the recipe need. For seitan bacon, the marinade creates the bacon flavor.

Instead of frying it up in a pan, fry it in the air-fryer oil-free 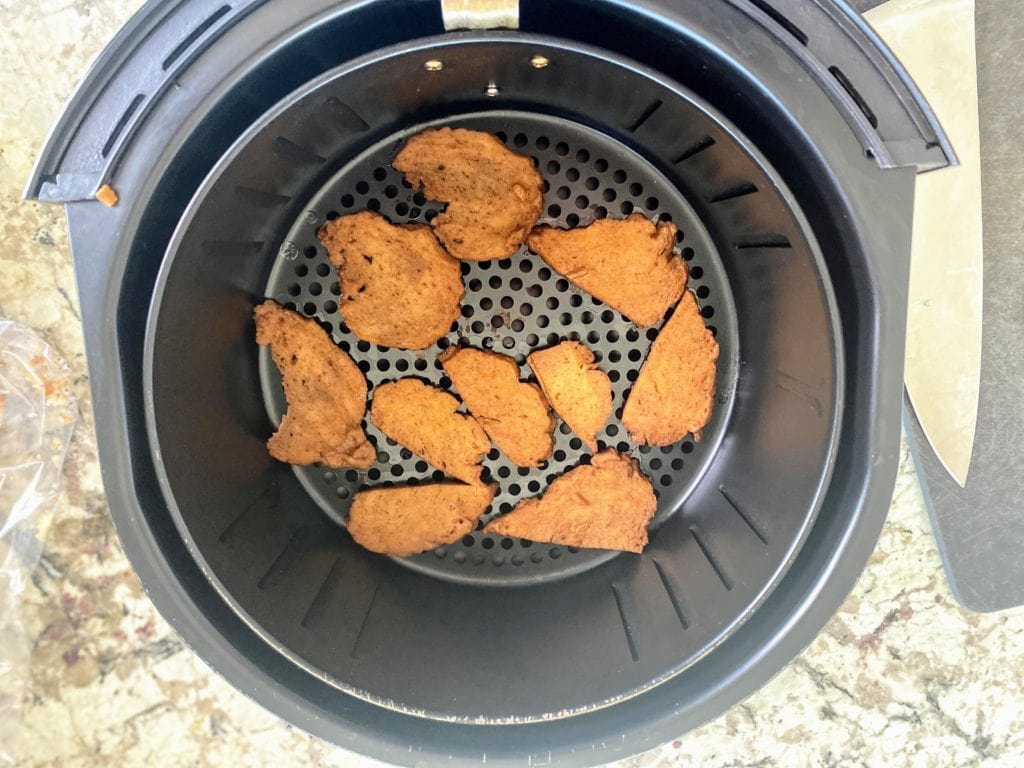 Once marinated, the seitan cooks quickly in the air fryer. In 7 minutes the seitan bacon is crispy on the outside, while still soft and flavorful on the inside. Because only one batch cooks at a time, prepare a plate and cover with aluminum foil until all the pieces are cooked.

Does seitan taste like meat?
Quite similar, yes. Seitan has a savory taste, closely associated with chicken. However, its popularity is due to its meaty texture rather than the taste.
Is it cheaper to make seitan?
Yes. Store-bought seitan would cost you around 40 cents. Meanwhile, homemade seitan will cost you about 12 cents.

Making the Seitan BLT recipe...if you are adventurous.

To make a seitan Blt with seitan bacon, gather the following ingredients per sandwich.

Other uses for seitan bacon

If you love vegan bacon, try seitan the next time you plan to make fakin bacon. You'll love the texture and flavor. 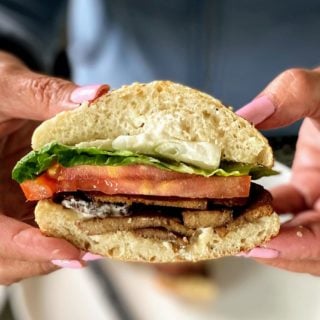 Does seitan taste like meat?
Quite similar, yes. Seitan has a savory taste, closely associated with chicken. However, its popularity is due to its meaty texture rather than the taste.
Is it cheaper to make seitan?
Yes. Store-bought seitan would cost you around 40 cents. Meanwhile, homemade seitan will cost you about 12 cents.