Celebrate the end of summer with this tasty succotash recipe with grilled corn, lima beans, and tempeh bacon. One bite of succotash, and you'll be hooked.

I love fresh summer corn, so I took my favorite succotash recipe and turned it into a vegan succotash salad. My version, though based on a traditional recipe for succotash, is so delicious and savory that you won't believe it's a salad.

At the farmer's market this week, the corn was calling my name. There's something about fresh summer corn on the cobb cooked on the grill. Although succotash is traditionally a side dish, I decided to turn it into an entree.

Succotash was a Native American staple served as a stew of summer-fresh or winter-dried corn, making it a year-round choice for gatherings. The word showed up in 1751 from the Narragansett Indian term "misckquatash," which meant "boiled whole kernels of corn" and referred to a simmering pot of corn to which other ingredients were added.

Since then, however, traditional succotash has changed to a popular side dish served hot or cold, with the primary ingredients being corn and lima beans or other shelled beans.

My vegan version is full of vegetables, savory tempeh bacon, tofu feta cheese, and topped with an avocado ranch dressing. One bite, and you'll be hooked!

Why do they call it succotash?

Succotash is from a Narragansett word, "msickquatash," meaning broken corn. Other translations indicate it means "boiled whole ear of corn." Whole ears of corn were boiled, and the kernels were cut from the cob and combined with Lima beans and other vegetables from the harvest.

What ingredients are traditionally found in succotash?

Succotash is a truly vintage dish introduced to us by Native Americans. The traditional dish includes corn, lima beans or butter beans, and pork. Rich in nutrients and inexpensive to make, it was especially popular during the Depression and World War II.

You will love this vegan version of a classic succotash recipe. Enjoy seasonal grilled corn while it's fresh!

If you love my version of succotash, give us a 5-star review and comment below. We would love to hear from you! 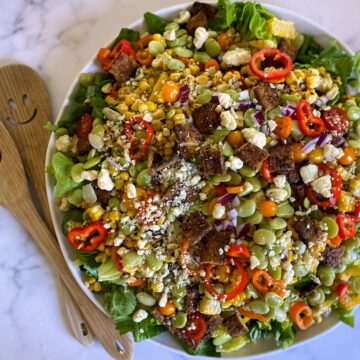