Although I love chili, when we talk about authentic coney chili sauce, it is in a league all its own.

Despite the recent hype and debate over alternative meats available, I don't think eating them from time to time is a problem. There are plenty of soy-based proteins like BOCCA original crumbles, which I like, or you can always use lentils in place of alternative meat.

Beyond Meat, for example, is made with pea protein, is soy-free, NON-GMO, gluten-free, and has 50 percent less fat than real ground beef (which isn't even something I would EVER consider eating).

Anyway, I decided to make vegan coney chili sauce with lentils, but if you enjoy meat alternatives, you can swap out the lentils for your favorite plant-based meat.

As vegan hot dogs go, they all taste different due to various ingredients. The healthiest version of a vegan dog is my carrot dog's recipe. And my kids love carrot dogs.

If you are in search of store-bought vegan hot dogs, many popular brands exist:

Although it may seem like there are a lot of ingredients in vegan coney chili sauce, everything is probably in your pantry. However, the magic has nothing to do with choosing alternative meat or lentils but with the combination of spices and sauces.

First, saute the garlic and onions until the onions are translucent.

Then, add the rest of the spices and sauces and simmer them into excellent, tasty vegan coney chili sauce.

Next, add the remaining ingredients and allow the vegan coney chili sauce to simmer and thicken.

Next, add the remaining ingredients and allow the vegan coney chili sauce to simmer and thicken.

Like real ground beef, Beyond Meat Crumbles and Bocca Original Crumbles are located in the freezer section of local grocery stores.

Nowadays, there are meat alternatives in the refrigerated section, pound packages, or prepared burgers.

Cooking plant-based meat alternatives are very similar to cooking ground beef. However, instead of using oil or any suggested grease, use vegetable broth in the skillet to prevent sticking as directed.

The rest is pretty self-explanatory. Brown the plant-based meat as you would ground beef.

Again, I am not a big fan of alternative meat products, but I think they are great for people transitioning to a plant-based diet or experimenting with a different way of eating.

Plant-based meats are certainly not "healthy," but they provide an avenue for those interested in grilling burgers or finding meat that crumbles for tacos or chilis. Or, they work for those who enjoy these products and choose to go that route.

If preparing dry lentils, avoid overcooking them, so they don't fall apart when cooked a second time in the sauce.

Other Uses for Coney Sauce

If you're not a carrot dog fan, try vegan coney chili sauce on potatoes, as a burger topping, or serve it with nachos.

I also have another loaded chili fries recipe that uses regular vegan chili with beans to make vegan coney sauce.

What is a good vegan substitute for hot dogs?

A whole foods option for a hot dog is a carrot dog. However, many vegan hot dog brands are sold in stores.

What are vegan franks made of?

Today, most vegan meat companies offer their version of a sausage or a frank, but the ingredient list has expanded far beyond tofu. Manufacturers use a mix of soy and vital wheat gluten, go all-in with a chewy seitan base or rely on veggies and beans to replicate the taste and texture of this stadium favorite.

Veggie dogs feature a wide variety of ingredients to provide consumers with the same texture and taste as a hot dog, but without the terrifying mystery meat blends. Though the exact recipe varies between brands, most vegan dogs use an oil- or protein-based to create these alternative dogs.

Take a bite, and let me know what you think! Then, print this fantastic vegan coney chili sauce recipe.

Other Vegan Recipes to Love

If you love vegan coney chili sauce, give us a 5-star review and comment below. We would love to hear from you! 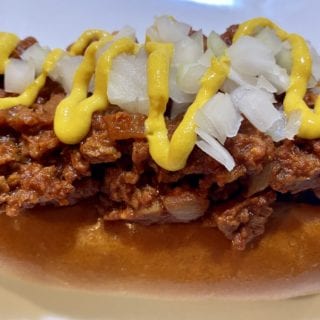