Vegan gumbo is a traditional Louisiana cajun stew made with various vegetables in a thick, slightly spicy tomato broth. Serve this vegan gumbo recipe as a soup, or add brown rice for a thick stew. And don't forget the vegan cornbread!

What's on today's menu? I'm spicing it up with some vegan gumbo. By now, you know I love comfort food made from fresh produce and the healthiest ingredients. However, Gumbo is a soup famous in the U.S. state of Louisiana and is the official state cuisine. My vegan gumbo recipe consists of thick, strong-flavored broth and the cajun/creole "holy trinity" ― celery, bell peppers, and onions. But of course, I added many other veggies, including fresh okra, a gumbo staple, because it's vegan.

If you can't find fresh okra, frozen okra works well. Or skipping okra is another option.

Vegan gumbo, a comforting stew rather than a soup, centers around a roux. Although most roux is made with butter or oil, creating an oil-free roux is easy.

Usually, roux, an equal combination of fat and flour, becomes a thickening agent in the Gumbo, making the broth thick. Instead, the oil-free roux browns with the sautéed vegetables, requiring only the moisture from the vegetables as they cook.

As a result, the vegan Gumbo thickens without needing to add any fat or oil.

Even though I love vegan Jambalaya,  jambalaya is primarily a rice dish. However, both dishes boast multicultural Creole and Cajun roots, so they are similar.

The main difference, however, is the role of rice, which is integral to both. Gumbo is served with rice cooked separately, but rice goes directly into the jambalaya pot.

One of the nice things about Gumbo is you can eat it with or without rice. I sometimes enjoy Gumbo without any rice; I eat it like soup from a bowl and skip the rice altogether.

Vegan Gumbo is rich and earthy and has a reasonably spicy flavor, but it does not burn your mouth spicy. Compared to Thai or Indian food, it is mild in spice.

But remember to cautiously add cajun seasoning to food because it can't be removed once added, so add a small amount at a time based on the directions to get the flavor you want.

What is Okra, and What Does it Taste Like?

Okra has a sweet, grassy flavor that takes on more depth with prolonged cooking and a texture that can be crisp, juicy, dense, and creamy.

Even though vegan gumbo contains a roux, okra helps thicken the sauce even more. To cut the okra, cut off both ends and then cut it into slices.

Once cut, the okra releases a slimy fluid, which is normal. The sliminess, however, is what helps the sauce thicken even further.

According to Healthline, one cup (100 grams) of raw okra contains:

Okra is an excellent source of vitamins C and K1.

How to Make Vegan Gumbo

Begin sauteing the garlic, onions, and celery until the onions are translucent.

Then, add one tablespoon of flour, stirring the sweating vegetables until the coated with flour.

Next, add all the remaining ingredients, and bring the mixture to a boil. Then, turn down the heat to medium-low and allow to cook uncovered for 30 minutes.

When the vegan gumbo is cooking and thickening, make the brown rice if you haven't already.

To serve the spicy stew, place the rice serving on one side of the bowl and pour the stew on the other side. The sauce then seeps into the brown rice. But, as I said before, I love it without the rice too.

Great Side Dishes for Gumbo

And don't forget the vegan cornbread; it goes perfectly with vegan gumbo.  Or, choose these great side dishes instead.

Traditionally, gumbo is a hearty stew made from combinations of seafood, meat (such as andouille, chicken, and ham), or vegetables that are served hot over cooked rice.

What are three types of gumbo?

Traditional favorites usually include seafood, sausage, and chicken gumbo, but it's incredibly versatile. Vegan gumbo is a way to enjoy the stew's flavors without any animal products.

Why is gumbo so good?

Gumbo is essentially an edible metaphor. Much like the cultures in this region, this stew is a rich and diverse blend. It's made up of varying flavors and cooking techniques each equally fantastic on their own but together, they create a culinary symphony.

Vegan gumbo is spicy comfort food that warms you from the inside out!

Other Soups and Stews to Enjoy This Season

If you love this vegan gumbo recipe, give us a 5-star review and comment below. We would love to hear from you! 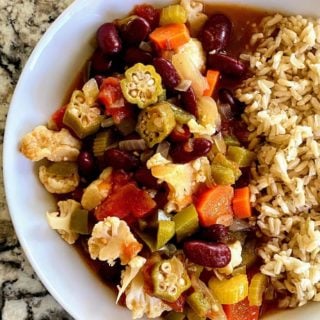