I love Middle Eastern food, and tabbouleh is one of my favorite salads. So instead of making traditional tabbouleh with bulgar, I swapped the bulgar to make quinoa tabbouleh! This quinoa tabbouleh recipe is full of superfood quinoa and fresh vegetables tossed in a tangy lemony dressing.

Quinoa is a grain crop grown for its edible seeds. So, quinoa is a seed, not a grain, as many believe.

In other words, it is a seed that is prepared and eaten similarly to a grain. There are many types of quinoa, including red, black, and white. Red is my favorite because of its vibrant color.

Here is the nutrient breakdown for 1 cup (185 grams) of cooked quinoa:

Quinoa is a good source of several essential nutrients, including folate, magnesium, zinc, and iron.

Quinoa is added to salads such as chickpea quinoa salad or Mexican quinoa salad. Or I love it hot as the base to a vegan bowl recipe like quinoa power bowl or Greek quinoa bowl.

Since quinoa tabbouleh is a cold salad, cook the quinoa and put it in the refrigerator to chill. In the meantime, chop the vegetables into bite-sized pieces.

Place the chilled quinoa in the base of a bowl and add all teh other ingredients. Pour the dressing over the top of the ingredients, and toss.

Place the covered salad into the refrigerator until ready to serve.

Tabbouleh is a healthy, vegan food that has no cholesterol, is low in fat, and is high in fiber, vitamins, and much more. Plus, it makes great use of the backyard gardener's abundance of parsley, mint, tomatoes, and cucumbers. This vegan dish is gluten-free by substituting quinoa for bulgur wheat.

Is quinoa or bulgar healthier?

Quinoa contains more protein than bulgur, but bulgur offers more fiber. So, they are both healthy. However, if you are looking for a gluten-free option, quinoa is the right choice.

Is quinoa better than rice?

You will love this quinoa tabbouleh for a different take on traditional tabbouleh! This is a great lunch recipe or a quick weeknight meal.

If you love this quinoa tabbouleh recipe, give us a 5-star review and comment below. We would love to hear from you! 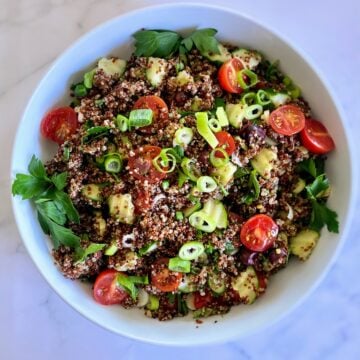