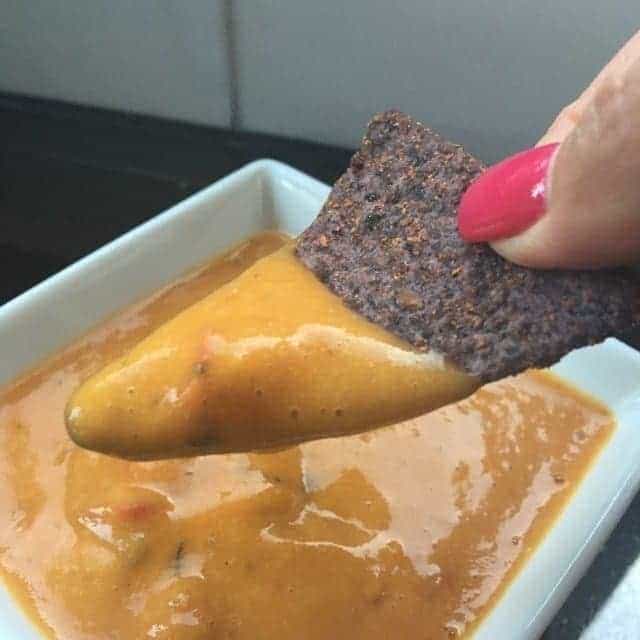 Back in the day, prior to healthy eating and eating plant-based, my mom used to make a nacho cheese sauce from Velveeta Cheese and Rotel tomatoes. Of course, it was our favorite snack to dip tortilla chips. At the time, however, I didn’t know anything about nutrition, or that Vetvetta wasn’t even food. Since then, I created a fabulous vegan nacho cheese sauce recipe with a variety of variations, we eat all the time. And, my vegan nacho cheese sauce is made with only vegetables.

When I transitioned to a plant-based diet, I struggled with giving up cheese. In fact, the only time I ever swayed was when cheese was involved. Back then, vegan cheese products were anything but good. Not only did imitation cheese taste like plastic, it certainly didn’t melt. So, I went on a mission to make a vegan nacho cheese sauce made with vegetables that tasted like cheese.

Needless to say, I wouldn’t eat Velveeta if you paid me, but I had an epiphany today about how to give my ‘cheese’ sauce the little kick it needed, and it worked!

Although there are a ton of vegan nacho ‘cheese’ sauce recipes made from potatoes and carrots, sweet potatoes, butternut squash, or white beans, I wanted to make an oil-free nacho “cheese” sauce with a little kick. And, I wanted to be able to use that base recipe to make different flavored vegan nacho cheese sauce recipes.

WHAT INGREDIENTS ARE  NEEDED FOR VEGAN NACHO CHEESE SAUCE?

First, the beauty of this vegan nacho cheese sauce is the variety of ways you can change its flavor by changing just a few ingredients. For example, for a smokey cheese sauce, I simply remove the jalapeno and hot sauce and add 1 Tablespoon of liquid smoke.

Another suggestion to transform vegan nacho cheese sauce is to make a  Mustard Cheese Dip for pretzels or vegetables by adding a little water and some yellow mustard. If you aren’t a mustard fan, add a little of your favorite beer, for beer cheese. 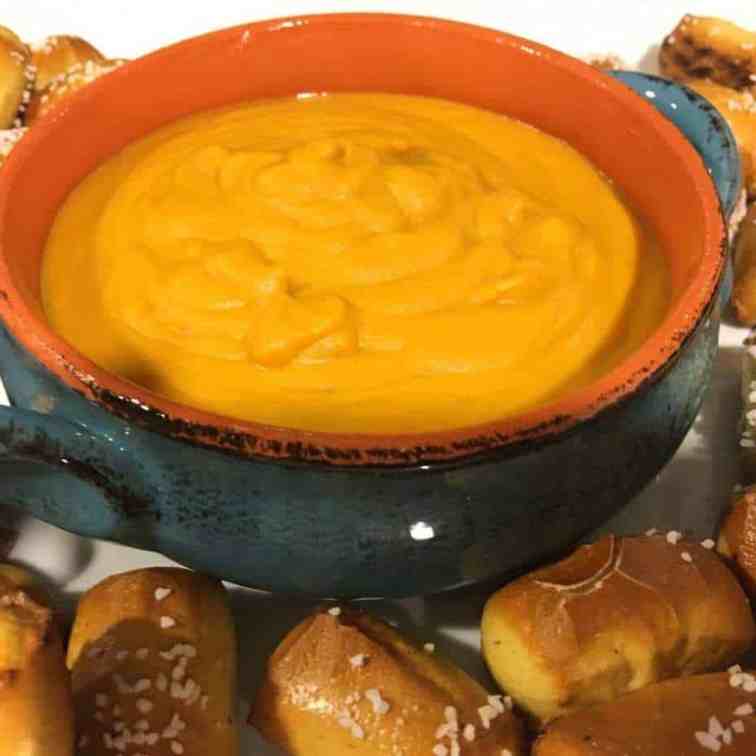 Furthermore, I use vegan nacho cheese dip as the base for my favorite Skinny & Cheesy Spinach Artichoke Dip. Not only is this recipe a family favorite, I always bring this recipe to parties. 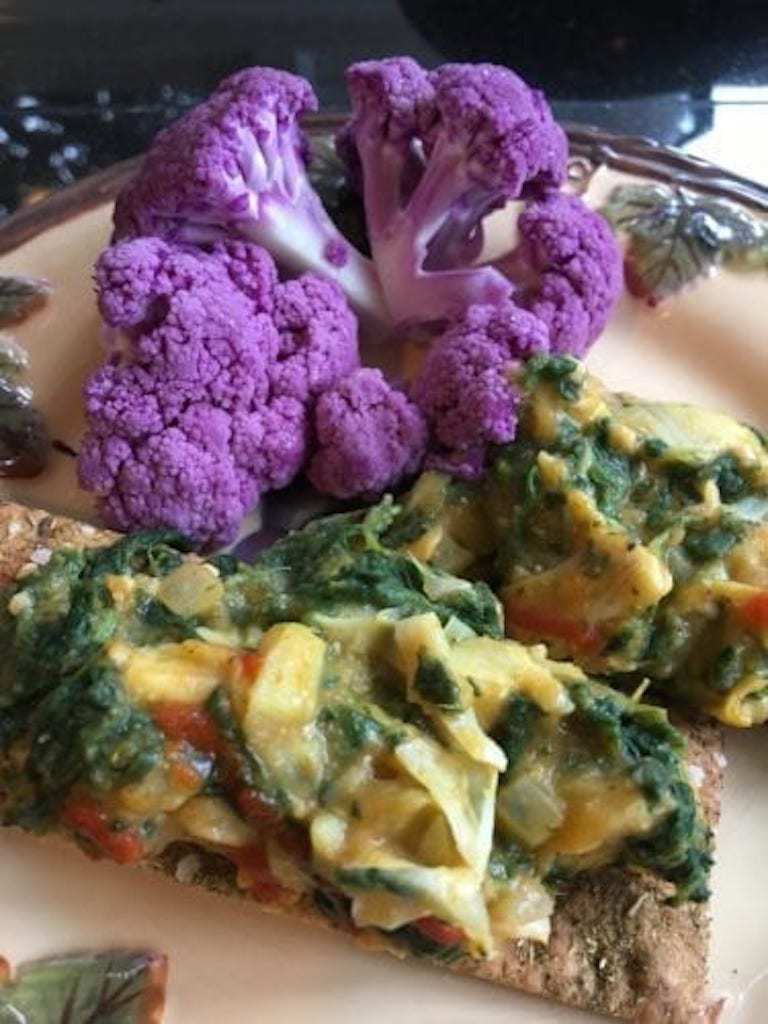 WHAT IS ADDED TO THE BASE VEGAN NACHO CHEESE SAUCE TO MAKE SKINNY & CHEESY SPINACH DIP?

In addition, I use vegan nacho cheese sauce for the base of my Vegan Chili Mac recipe, which is definitely one of my kids’ favorite meals. 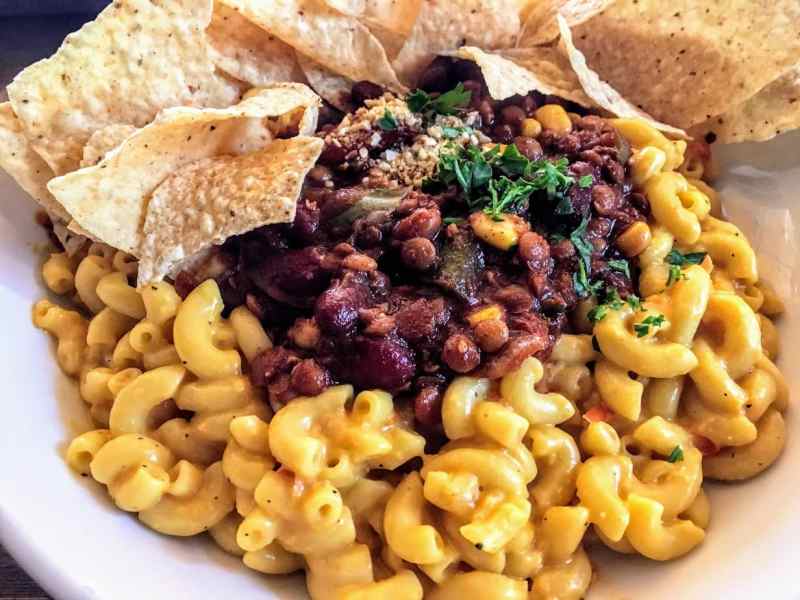 In order to make my Vegan Chili Mac recipe, I use the same skinny nacho cheese sauce recipe, noodles of choice and add:

For example, my vegan nacho cheese sauce recipe is also used for the base cheese sauce in my Crunchwrap Supreme Recipe, which is one of my personal favorites. Instead of going to Taco Bell, make healthy Taco Bell at home. 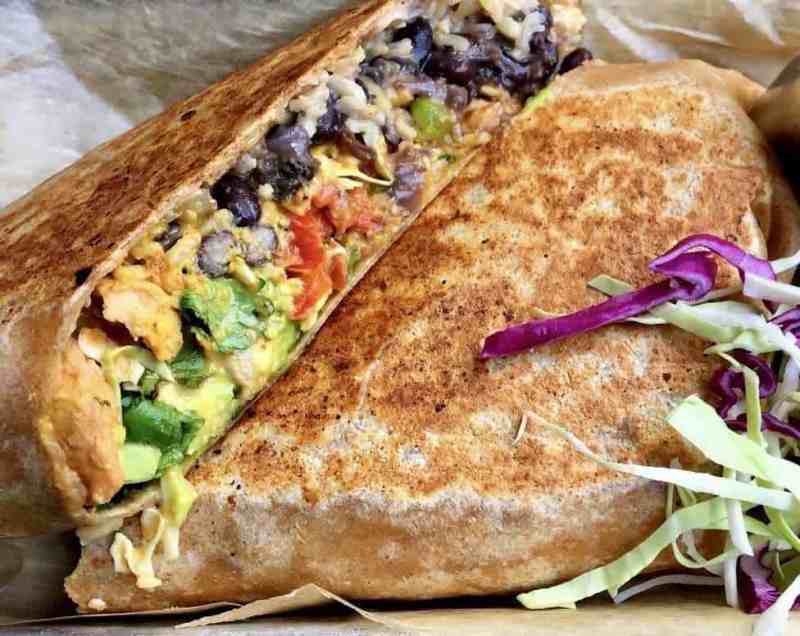 Another one of my favorite recipes using vegan nacho cheese sauce as the base is my Skinny Chili Cheese  Dip, which is another party favorite! 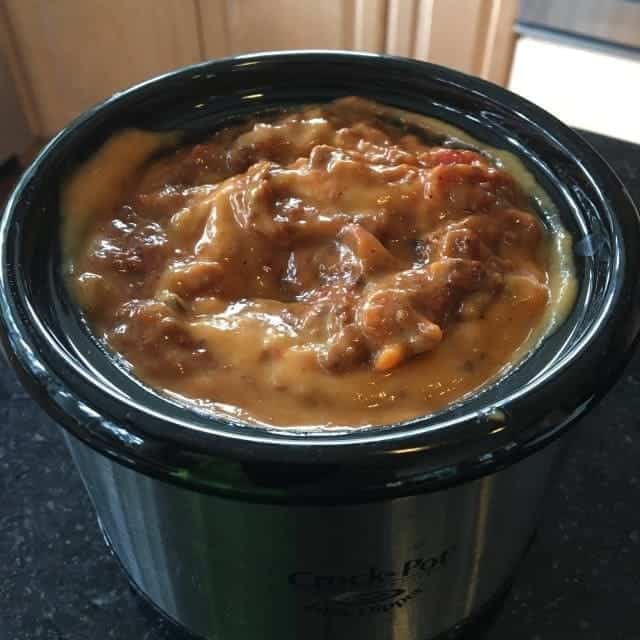 Regardless of what you plan to make, vegan nacho cheese dip can transform any cheesy meal.  Make a large amount of base cheese sauce in advance, and add that special flavor for whatever occasion you choose. Or, simply add it to your recipes with cheese as the main ingredient. You won’t be disappointed.

There isn’t a carnivore alive that would have any idea this isn’t the real deal, and it happens to be oil-free and virtually fat-free as well. So, give it a try, and don’t tell those plant-based skeptics the truth. It’s our little secret.

OTHER RECIPES TO USE VEGAN NACHO CHEESE SAUCE

If you like it 'cheesy,' you will love this vegan nacho cheese sauce recipe. Made of only vegetables, it is fat-free and oil-free.

I use the sauce on top of grilled fajita burritos, or you can serve with chips, or on top of a potato, broccoli, or anything else you like spicy and cheesy.