When the weather gets chilly, I love making vegan tortilla soup. Jackfruit is a fabulous meat replacement and shreds into thin, delicate pieces. Then, it soaks in the thick sassy broth filled with beans, and vegetables. I always serve oil-free, air-fried tortilla strips on top of this vegan tortilla soup recipe for an added crunch.

Not only did it work as planned, but I ended up with a large pan of enchiladas and eight servings of vegan tortilla soup.

Jackfruit, though commonly found in a can, is a high protein, high antioxidant fruit. Its bland flavor is the perfect texture and blank slate to absorb marinade or spices. As a result, the jackfruit's neutral flavor allows me to transform it into spicy shredded meat.

Jackfruit has the texture of chicken! I didn't say it tastes like chicken because I wouldn't say I like it.  But tortilla soup is generally full of chicken, so I plan to fill it with jackfruit and veggies.

How to Prepare Jackfruit

When drained and removed from a can, Jackfruit looks like triangles of chicken. However, it is tasteless if you taste it as it comes from the can. Jackfruit's bland flavor makes it the perfect sponge for absorbing flavors.

For me, the fun is transforming a can of jackfruit into an incredible vegan tortilla soup recipe that would fool any meat eater. But first, buying the jackfruit in water or brine is vital.

However, one of the biggest mistakes people make is buying jackfruit in syrup. Unfortunately, I made this mistake, and I ended up throwing my whole meal away. And I hate wasting food. So, avoid that pitfall and buy jackfruit in water or brine.

Then, you rinse the jackfruit, put it in your food processor, and pulse until shredded.

Although many recipes suggest using jackfruit as is, I'm afraid I have to disagree. Instead, I like to cook it first. Like vegan buffalo chicken dip, cooking the jackfruit first gives it a different texture and flavor.

For the jackfruit to get the right flavor and texture, my goal is to absorb the onions, jalapenos, cilantro, garlic, and spices before it goes into the soup pot.

Sauteeing the onions, garlic, and jalapeno brings the flavors before adding the cilantro.

However, the magic is sauteing the cilantro with the initial vegetables with lime and then add the jackfruit.

First, I saute the red bell pepper with the grilled corn removed from the cobs.

Then, I add the cooked jackfruit meat and a can of drained and rinsed black beans.

Then, I add all the vegetable broth, tomatoes, poultry seasoning, and nutritional yeast. Because the jackfruit is already pre-seasoned, you do not need other herbs or spices.

Next, bring the soup to a boil and then lower it to simmer for 30 minutes to develop the flavor. In the meantime, make the oil-free homemade tortilla strips.

To begin, I used white corn tortillas and a pizza cutter; I cut the tortilla into strips. Then, I added the cut tortillas into a bowl and tossed them in lime juice. Next, I sprinkled a combination of chili powder and cumin.

Once seasoned, add the tortilla strips to an air-fryer basket and cook at 370 degrees for 10 minutes, tossing once at the 5 minutes mark.

When serving vegan tortilla soup, I like to add the tortilla strips on top of the soup and add diced avocado.

If tortillas are put directly into the soup pot with the rest of the soup, the tortillas will be broken up and soft. For that reason, I serve them as a garnish.

Why is it called tortilla soup?

The story goes that it was first invented in the state of Tlaxcala, which in the Náhuatl means the place of tortilla abundance. It is believed that the soup was created from the need to prepare foods that were easily digestible with the ingredients on-hand

What country is tortilla soup from?

Although the exact origin of tortilla soup is unknown, it is known that it comes from the Mexico City area in Mexico.

If you love this vegan tortilla soup recipe, give us a 5-star review and comment below. We would love to hear from you! 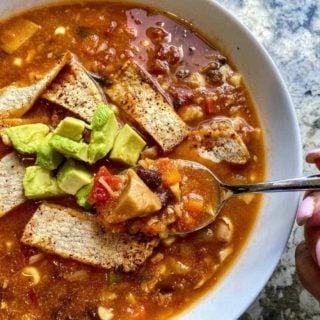