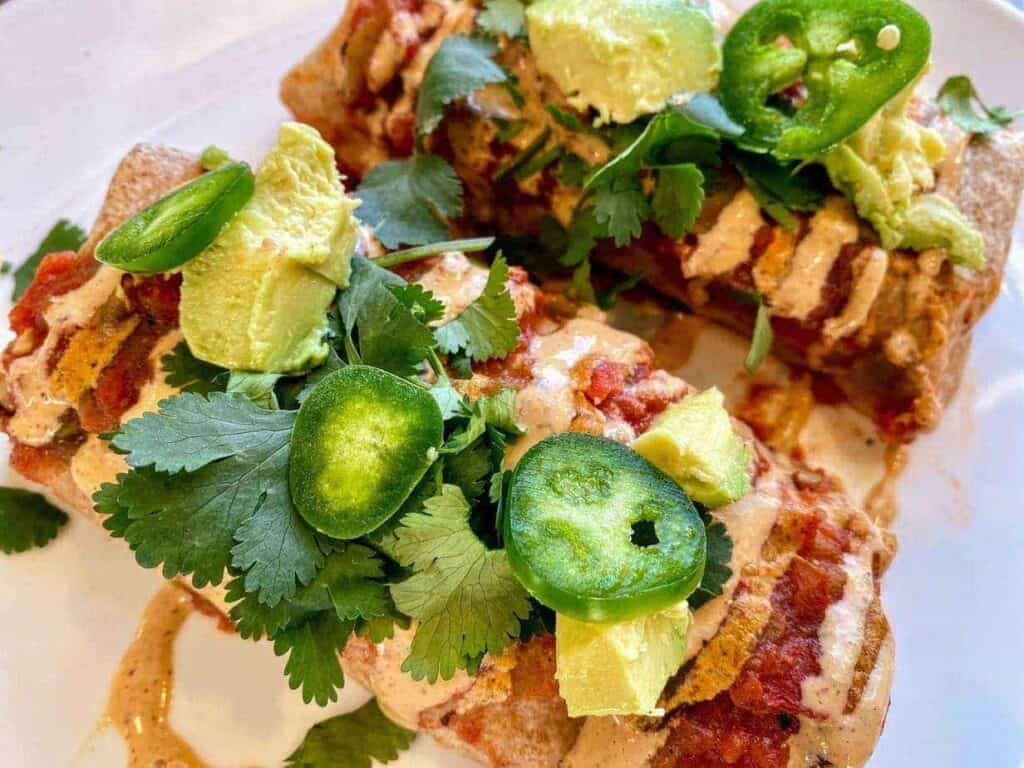 When I first became plant-based, I struggled with cooking and eating jackfruit. Similar to tofu, I had an issue with the soggy texture. Then, I discovered jackfruit is magical if cooked correctly. After some thought, I figured shredded jackfruit was the perfect filling for vegan enchiladas. Then I added a few other magical ingredients for jackfruit enchiladas.

Actually, jackfruit has the texture of chicken! I didn't say it tastes like chicken because obviously, I'm not too fond of chicken.  But I love the texture, especially for vegan enchiladas!

So, let's talk about making jackfruit enchiladas that will bring your family to the vegan dinner table. 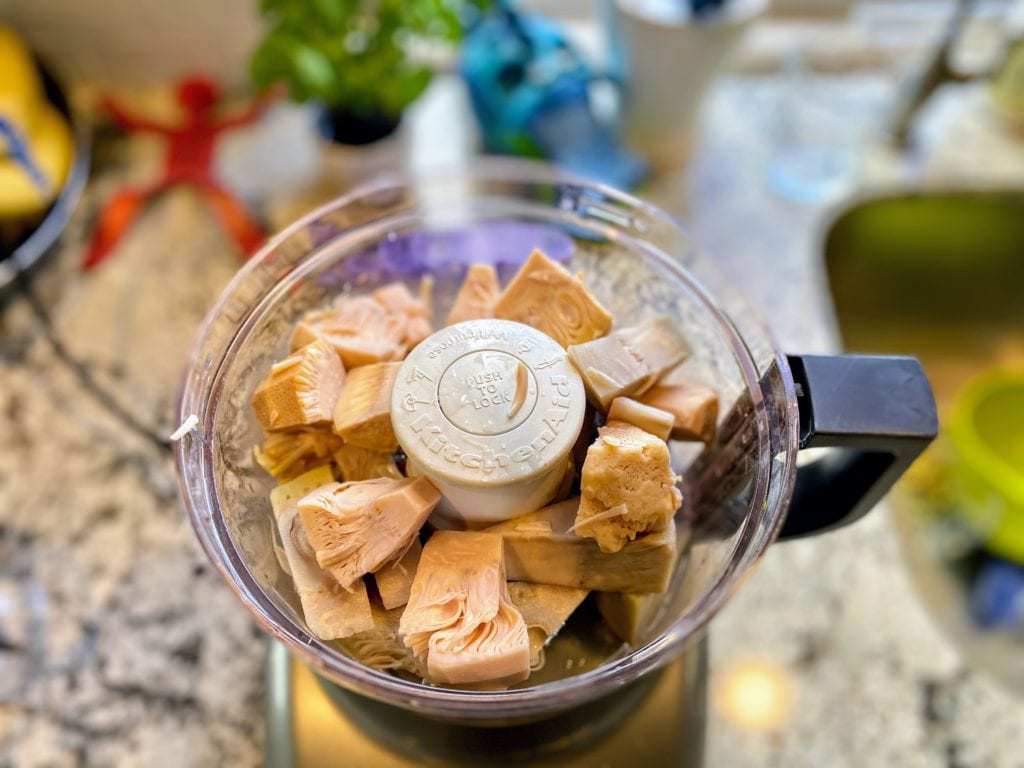 Jackfruit, when drained and removed from a can, looks like triangles of chicken. If you taste it, as it comes from the can, it is tasteless and somewhat salty. In fact, jackfruit's bland flavor makes it the perfect sponge for absorbing flavors.

Then, you rinse the jackfruit, put it in your food processor, and pulse until shredded. 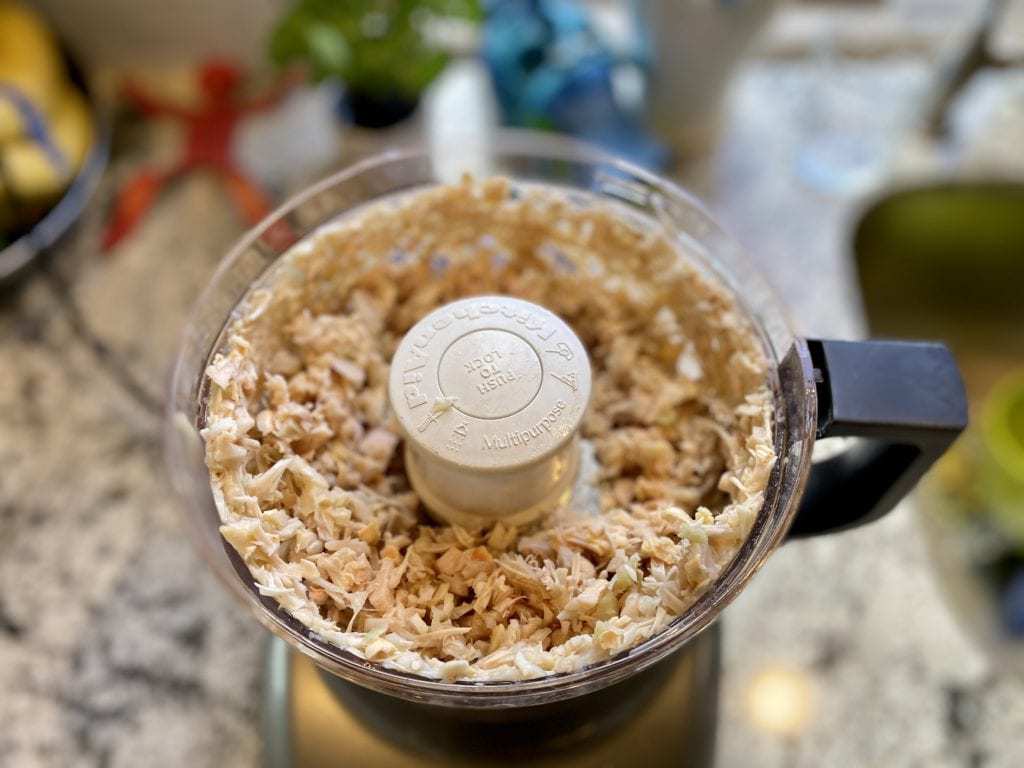 Although many recipes suggest using the jackfruit as is, I'm afraid I disagree. So instead, I like to cook it first. Like my Vegan Buffalo Chicken Dip, cooking the jackfruit first gives it a different texture and flavor.

For the jackfruit to get the right flavor and texture, shred it to absorb the onions, jalapenos, cilantro, garlic, and spices before it goes inside the vegan enchilFirst, sauteeing the onions, garlic, and jalapeno t first, brings the flavors before adding the cilantro.

However, the magic is sauteeing the cilantro with the initial vegetables with lime and adding the shredded jackfruit. 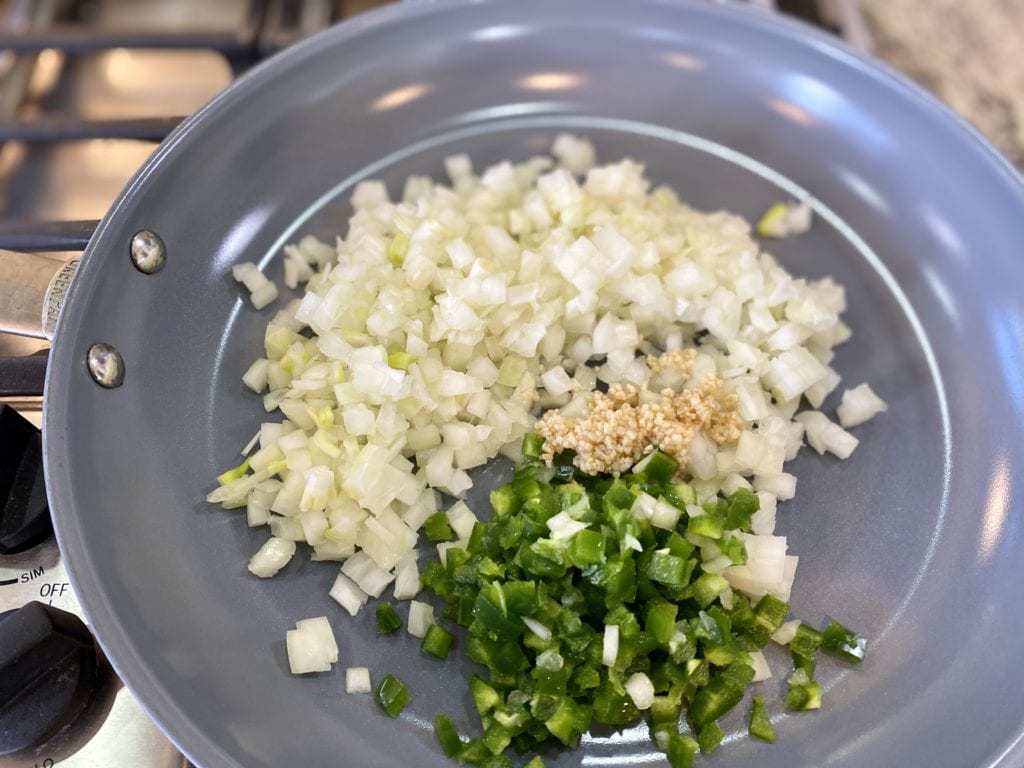 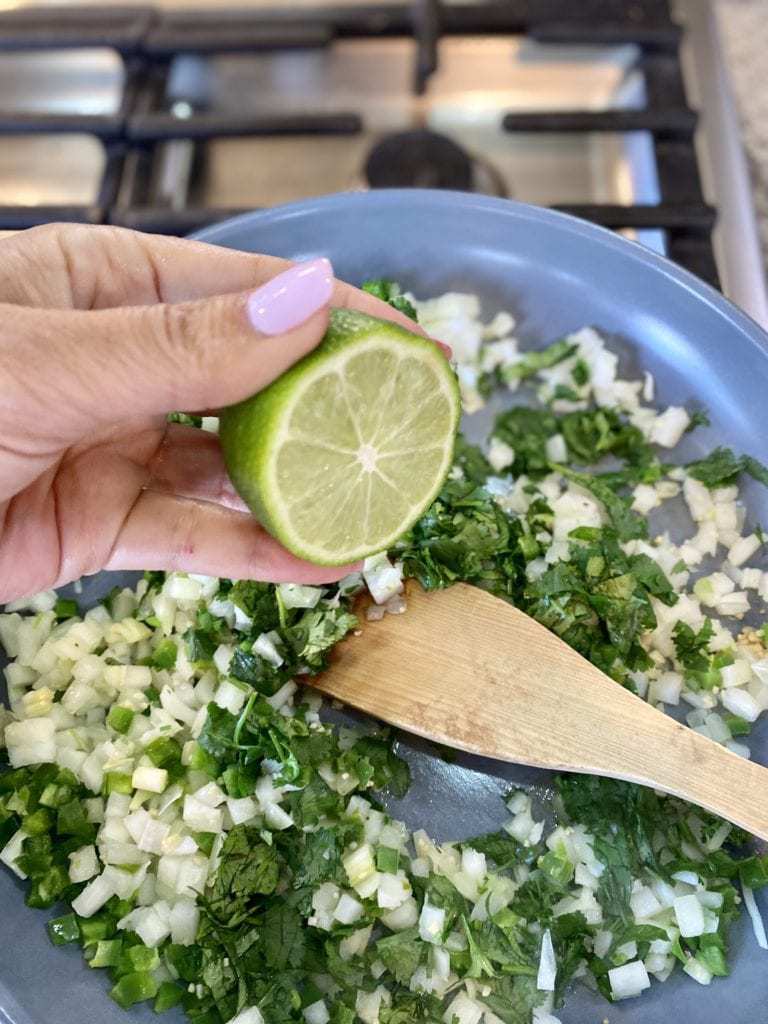 How to cook jackfruit for enchiladas

Once the jackfruit is added to the pan, the goal is to add spices, brown it and dry it out. 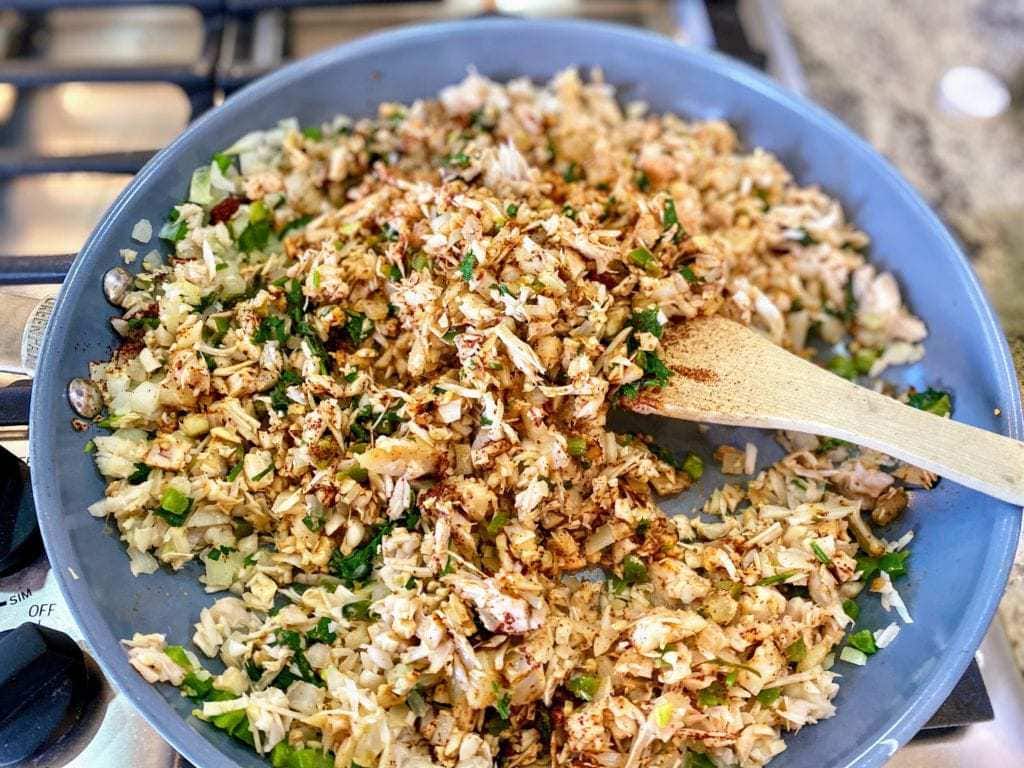 How to make veggie enchiladas 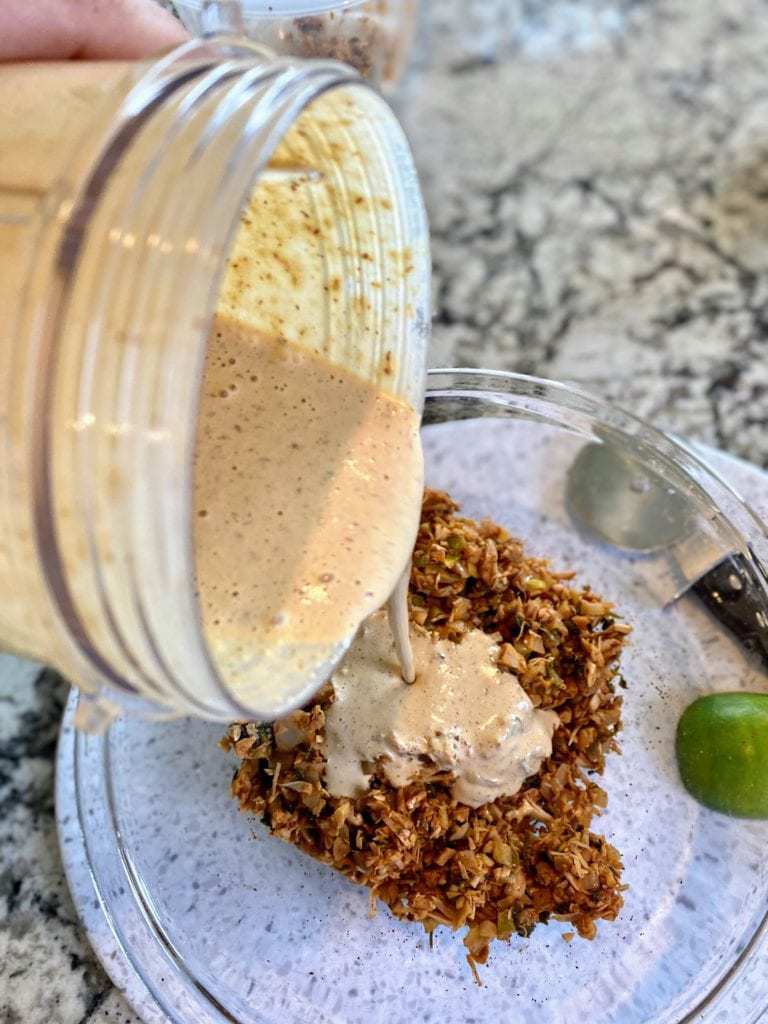 Once the shredded jackfruit is cooked with the vegetables, transfer to a large bowl and add the cheese sauce mixture. 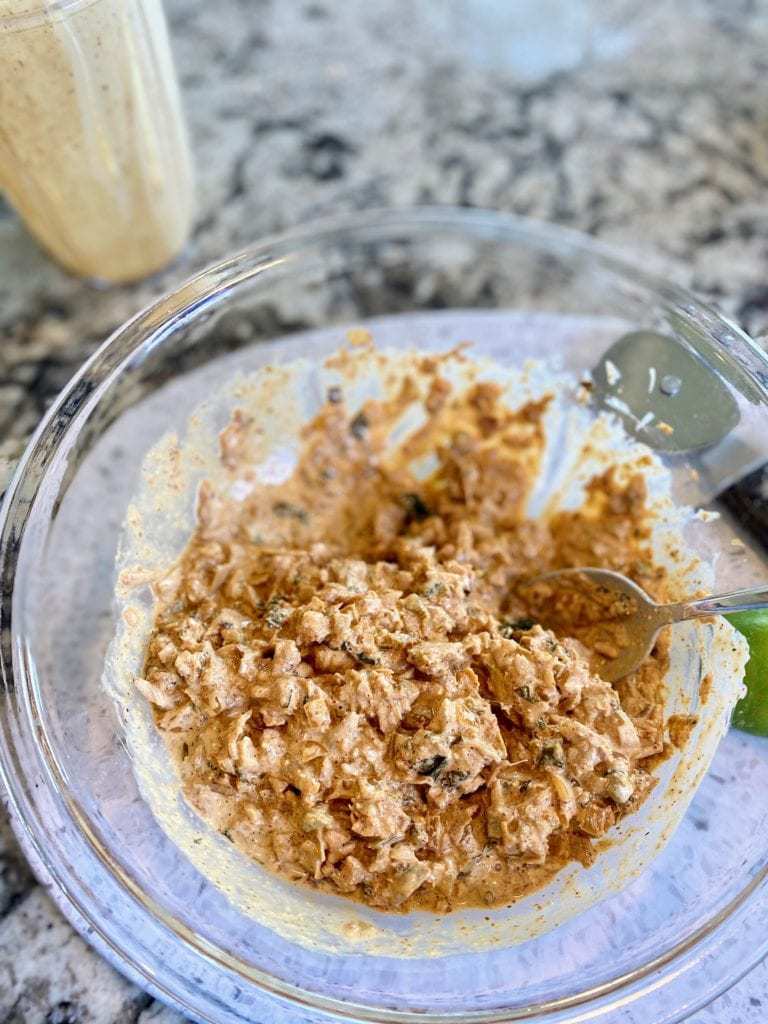 Then add the black beans and raw spinach. Whenever I make jackfruit enchiladas with spinach, I always use a generous amount of spinach. 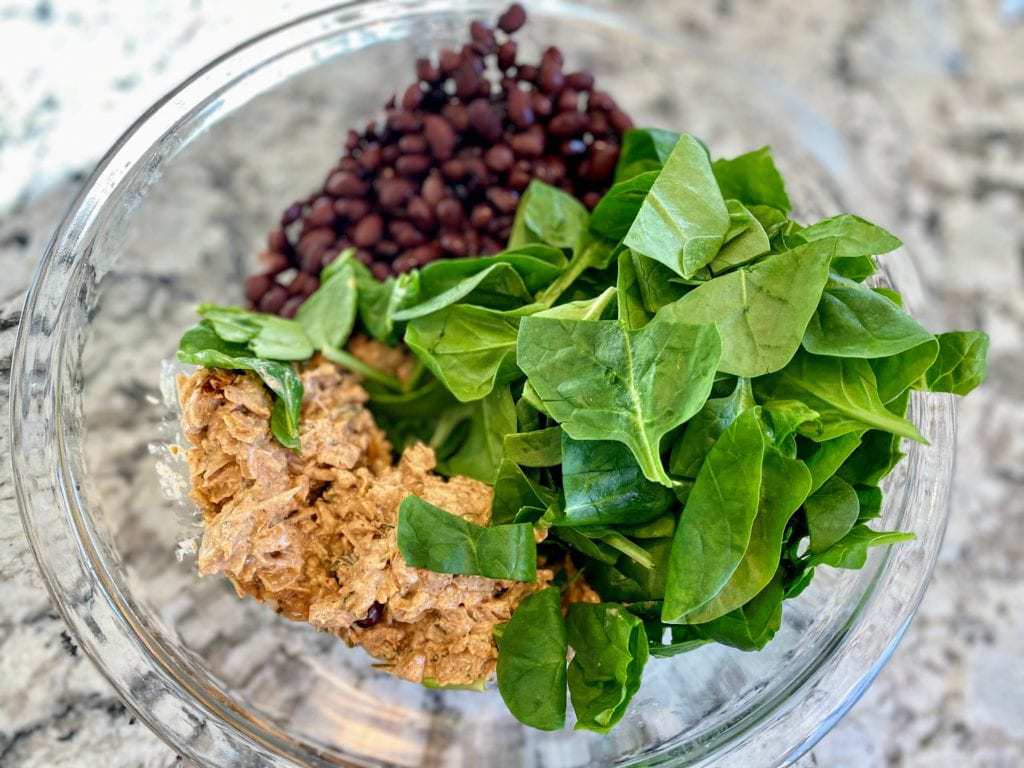 Even though the mixture appears chunky, the vegan enchilada mixture cooks perfectly in the oven and the spinach wilts.

As you all know, I am all about cooking ahead of time to make daily meals easier. For this reason, I doubled the jackfruit sauteed recipe to make my vegan tortilla soup recipe. As a result, the jackfruit mixture can be made ahead of time and refrigerated until you are ready to make the enchiladas.

Then, all you have to do is throw it together to save time when it's time to make dinner. In the same way, if you double the recipe for the jackfruit meat, you prep once for two separate meals.

Also, the Nacho Cheese Sauce made ahead of time can be used for a variety of recipes such as: 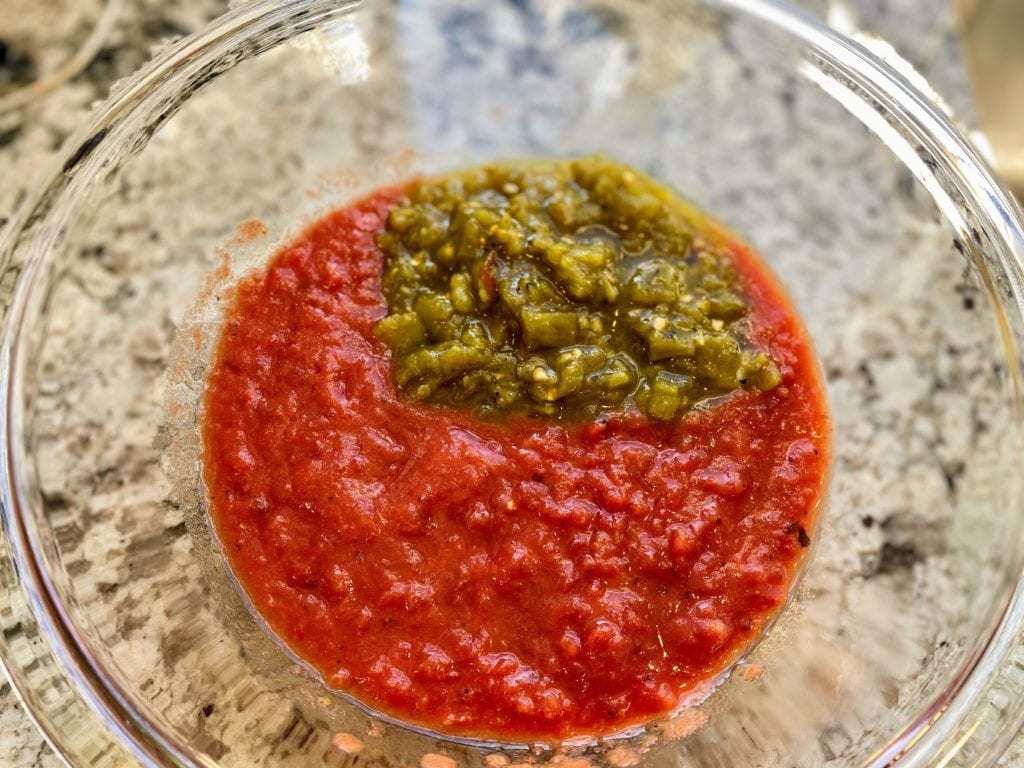 Recently, I made a Mexican Lasagna using a combination of fire-roasted tomatoes and hatch chili sauce. This two-ingredient enchilada sauce, for example, is simple and can also be prepared beforehand if food prepping.

To avoid using any oil, add half of the enchilada sauce n the bottom of a 9 X 13-inch pan, and then roll the enchiladas together. 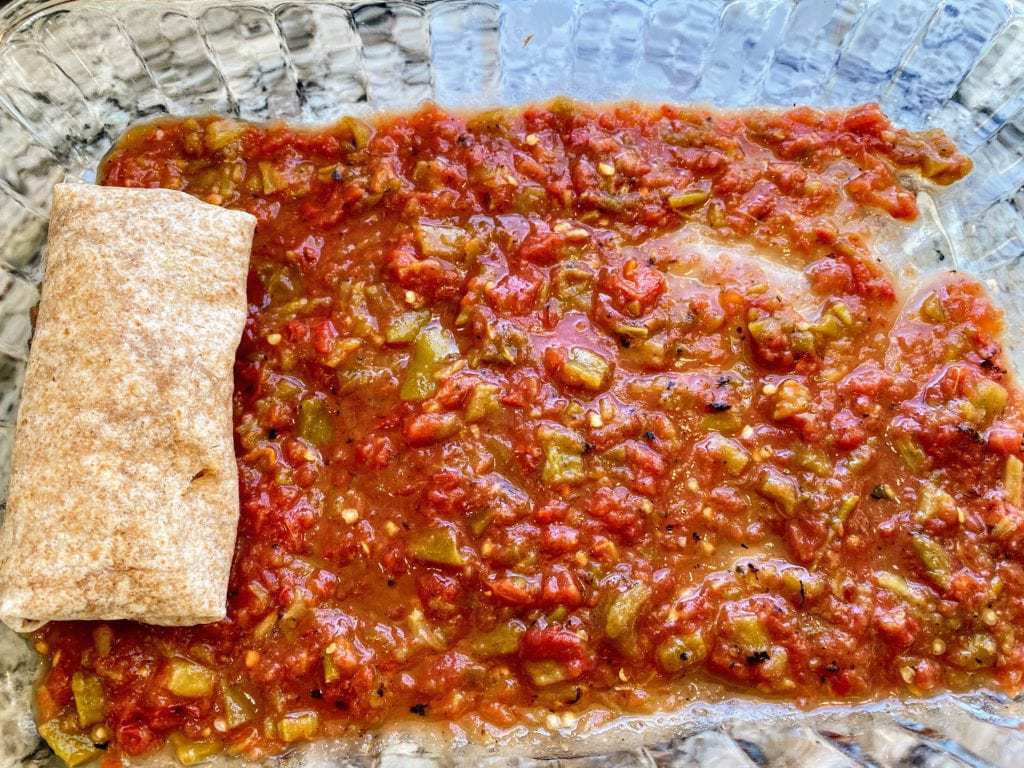 ROLLING THE TORTILLAS FOR VEGAN ENCHILADAS

As soon as the pan's bottom is covered in half the enchilada sauce, it is time to roll the tortillas.

First, lay each tortilla on a flat surface. Next, using the combined jackfruit mixture, place a generous amount in the middle of the tortilla lengthwise. 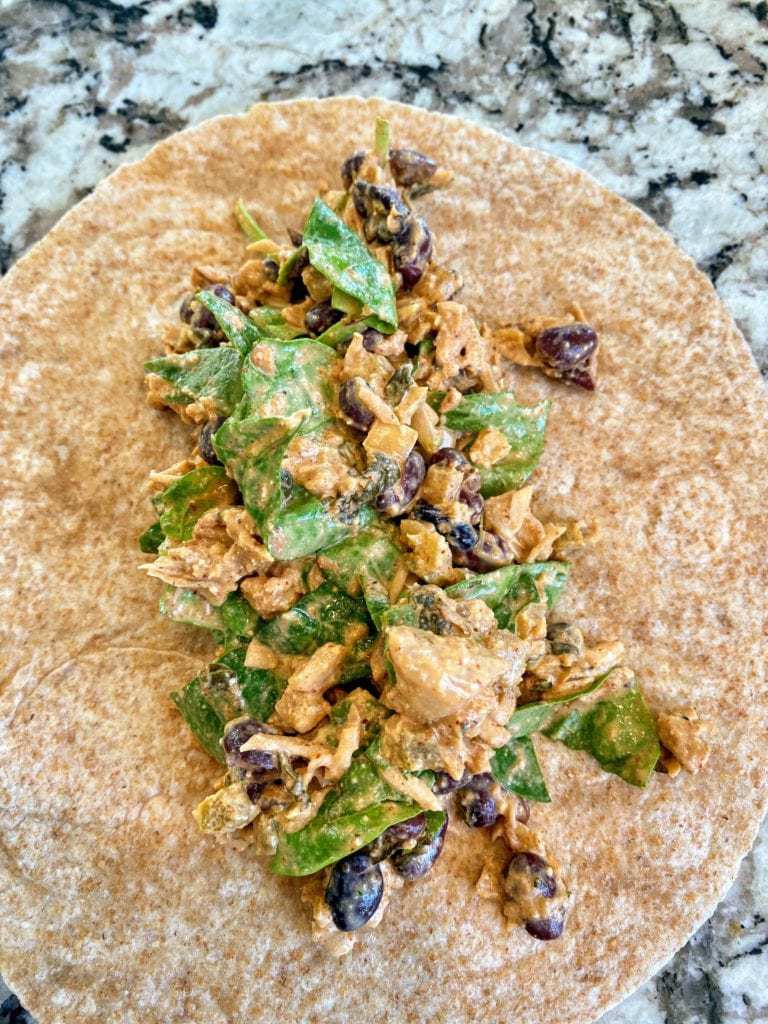 Then, fold both ends, tuck, and roll the tortilla tightly, keeping the jackfruit filling inside. The trick, then, is to lay each tortilla in the base of the pan, on top of half the enchilada sauce, seam down. As a result, the filling will stay inside the tortillas. 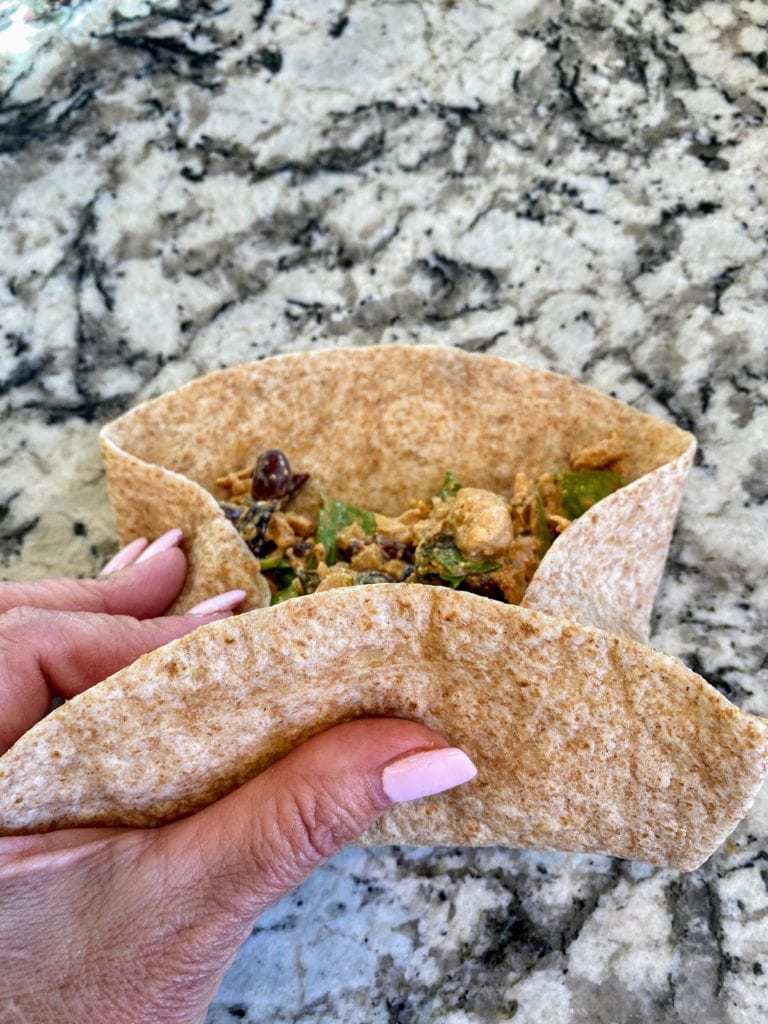 Now, pour the remaining enchilada sauce equally over the top of the stuffed tortillas. For a bonus, using a squirt bottle, I drizzled additional Skinny NachoCheese Sauce on top. 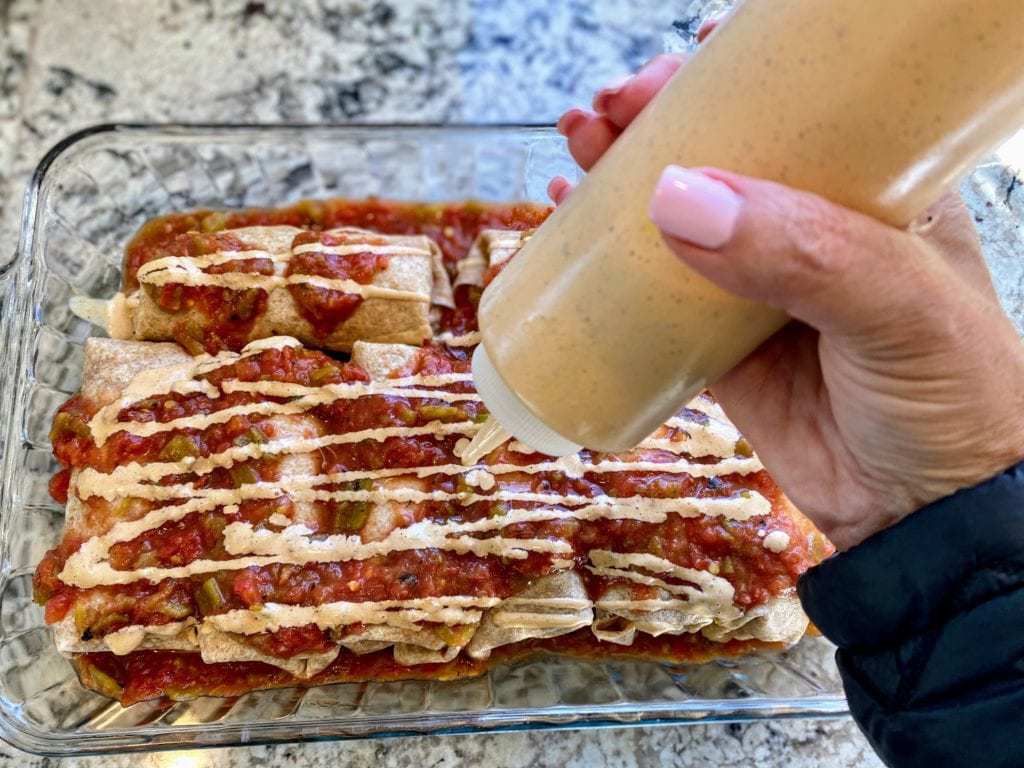 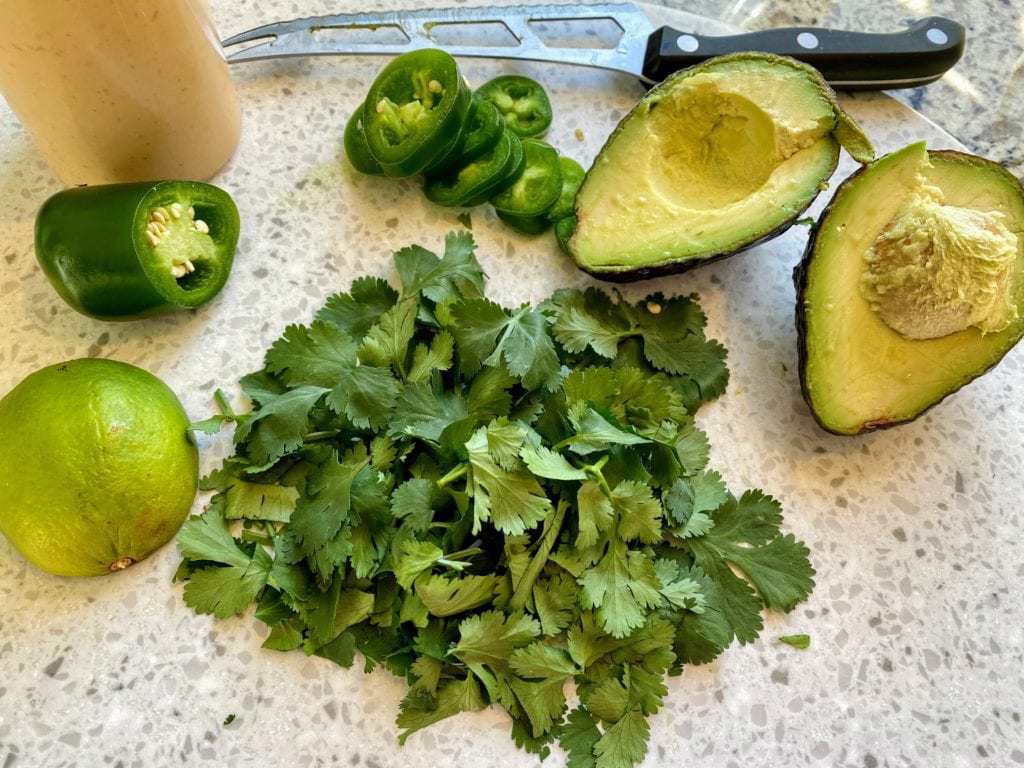 Even though these enchiladas are fabulous alone, I love to add extras to make them pretty and a bit more yummy. 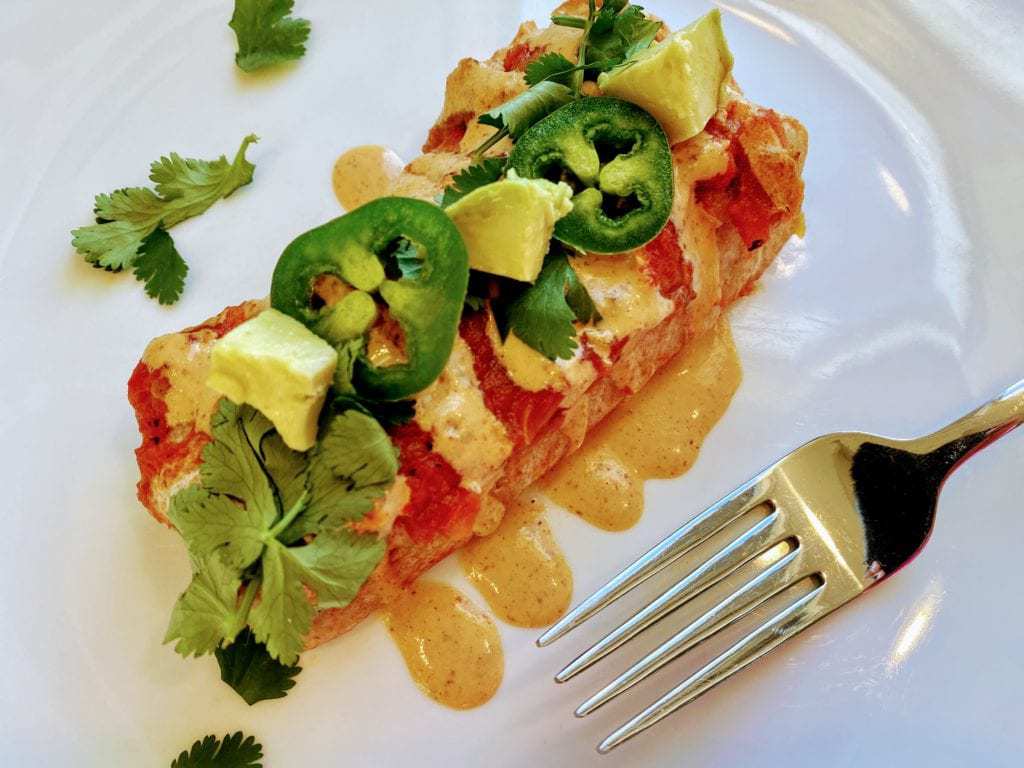 Because I love Mexican food, I often think about the possibilities of different recipes, but, without a doubt, vegan enchiladas are a game-changer. My family, for instance, is my test kitchen. And, by no means are they easily swayed.

Even though I love my Green Plant-Based Potato and Kale Enchiladas, my family is now a fan of my new vegan enchilada recipe.

DO YOU LOVE MEXICAN FOOD? TRY THESE RECIPES: