Tater tots aren't just for kids anymore! So, instead of making nachos with chips, make tater-tot nachos! And with the Superbowl right around the corner, plan fun snacks early. This tater tot nachos recipe is easy to make and tastes delicious.

Although I love nachos, recently, I discovered tater tot nachos, known as Totchos. In Scottsdale, a little Mexican joint called Dela Libre is close to our house. Not only do they have a vegan menu, but they also have vegan tater-tot nachos.  So, I made a tater tot nachos recipe at home for the big game!

What is Tater Tot Nachos?

When I was growing up, Ore Ida Tater Tots were a part of our childhood. I haven't eaten frozen tater tots in years, although I do love the crispy potato balls.

Last year, though, I decided to make healthy baked Tater Tots made from sweet potatoes and zucchini. In fact, we eat them often since I make them ahead of time and freeze them to use at my convenience.

Out of curiosity, I picked up a bag of Ore Ida Tater Tots to remind myself of why I made homemade baked tater tots in the first place. After reading the label and tossing it back in the freezer section, I knew why.  With 8 grams of fat and 130 calories for 7 tater tots, I laughed at the thought of only eating 7. I mean, who only eats 7 tater tots?

On the contrary, my tater tots have only 30 calories and 2 grams of fat for the same amount.

Another option for a healthier tater is Alexia brand tater tots, located in the healthy freezer section of the grocery store. For instance, Alexia Yukon Select Puffs have 100 calories and 4 grams of fat for 14 pieces. Despite containing a little oil, these are the best healthy store-bought options.

So, healthier options exist at your local grocery store in the event making your tater tots is not appealing. Making homemade tater tots at home is not very difficult, and it is a great activity for the kids to help cook.

Baking or air-frying the tater tots also gives you a healthier option than frying them in oil. So, skip the oil and opt for baking instead.

Considering different options to make the tater tot nachos healthier, I used my vegan nacho “cheese” sauce and my vegan coney chili sauce. Then, of course, add onions, tomatoes, jalapenos, and other veggies in my refrigerator that speak to me.

But there are other options, such as vegan lentil taco meat. Another idea is shredded jackfruit mixed with taco seasoning. Or, skip the alternative meat, jackfruit, and lentils and make them vegan cheesy, and delicious.

Regardless of your toppings choices, tater tot nachos are a great football snack, movie night at the home treat, or a meal depending on the toppings. There isn't a kid in the world who doesn't like tater tots or adults, for that matter.

When I first became vegan, I started 'veganizing' foods my family liked to get everyone on board. Since then, of course, my kids have grown to appreciate vegetables as well as their childhood favorites.

My children are now vegan adults who not only live on their own, they continue to cook and eat vegan. And, yes, from time to time, they like vegan junk food like the rest of us.

For example, my vegan coney chili sauce was one of those foods we missed when first becoming vegan.  After much trial and error, I created a sauce I could make ahead and freeze that could go on vegan hot dogs, air-fried steak fries, or get stuffed into a baked potato.

Comfort food, although sometimes not the healthiest, can be made healthier.

For example, vegan lentil taco meat uses lentils instead of a meat alternative and makes great taco meat. Not only is it oil-free, but it is perfect for chips, taco shells, and tater tot nachos. Because the lentil meat isn't overly moist,  it doesn't cause sogginess. Of course, this healthy alternative is an option to layer on the tater tot nachos recipe.

Even though the possibilities are endless, other ideas are to add my mushroom “chorizo” taco meat,  roasted cauliflower tacos with Avocado-Cilantro Cream, or Roasted Broccolini and Sweet Potato Tostados. For instance, if you think about it, anything you put on a taco or a nacho can be a topping for tater tot nachos.

If I can create a healthier way to eat fun food, every once in a while, it keeps me from straying off all the time. Some people, for instance, call this 'cheat food' or a 'cheat day. It isn't cheating if you keep it healthy and don't go rogue. In my household, it's called a healthy balance.

Again, this is all about personal taste. Of course, when I think of nachos, I think about a vegan nacho cheese sauce and tomatoes, green onions, and jalapenos. But feel about going crazy with lettuce, guacamole, cilantro, lime, or any other nacho topping you enjoy.

My nacho cheese sauce makes a lot, so although I made the whole batch for other recipes during the week, the recipe calls for ¼ of the linked recipe. Once created, the nacho cheese sauce will last in the refrigerator for 7 days. And, yes, it can also be frozen in small batches if you prefer.

First, cook your tater tots according to the link or package instructions. Then, while the tater tots are baking, make a chosen "meat topping." I used my vegan coney chili sauce.

While your meat is cooking and absorbing the last bit of moisture, prepare your veggie toppings. Then, place your cooked tater tots in a large shallow bowl or on a plate and drizzle with cheese sauce.

Then, the veggies and a little more drizzle, and you are in business.

And, if tater tots aren't your thing, and you prefer a simple nacho or Greek nachos!

How do I make my tater tot nachos crispy?

Are potato croquettes the same as tater tots?

They are versatile, as you can pair them with just about anything, and they are just good as a snack on their own. Tater tots versus potato croquettes: Both dishes are made from mashed potatoes. But traditional croquettes have cheese and are breaded with flour and egg before deep-frying.

Yes, homemade tater tots are oil-free and made from potatoes and zucchini.

With the Superbowl right around the corner, start planning by making this tater tot nachos recipe! 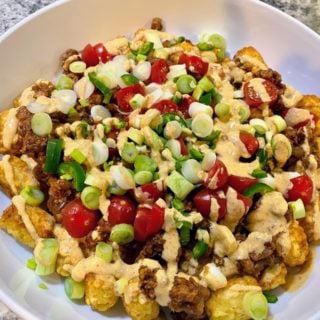