Vegan goulash is sweet with a slight hint of spice. This one-pot wonder is easy to make, quick and hearty, and clean-up is kept to a minimum. This vegan goulash recipe is a keeper! Just wait until you taste it!

When I crave comfort food, I think of my grandma's goulash. Traditional Hungarian goulash is full of flavor but loaded with fat. My vegan goulash is a version full of whole food ingredients, but it maintains the essence of grandma's recipe. Of course, my grandma wasn't Hungarian, but my vegan goulash recipe is an Americanized version of how I remember my favorite childhood meal.

Many variations of Hungarian goulash share similar flavors, but most recipes contain meat and cheese. Even in Hungary, chefs create their unique ingredients when crafting goulash. So, being somewhat of a chef, I made a particular version of a vegan goulash recipe.

Even though the sweet, subtly spicy flavors resonate in all goulashes, this vegan goulash recipe begins spicy but is easily adjusted for personal preference. Remember to add spice in small amounts, taste, and add more.

My vegan goulash is a one-pot, minimal-mess, quick recipe that is perfect for a weeknight dinner. This vegan goulash recipe is so easy; it practically cooks itself.

I started with her base ingredients to mimic my grandmother's Hungarian goulash recipe. Then, I deleted the meat, cheeses, and oil, adding vegan, healthy whole foods.

Since all the ingredients cook in one pot, begin by sauteeing the onions and garlic in a large pot over medium-high heat.

Because the sauces and spices are the magic of this vegan goulash recipe, it's important to add them early in the cooking process, so they develop in the short time the ingredients cook together in the pot.

Although the sauce is tomato-based, the Hungarian paprika, soy sauce, vegan Worcestershire Sauce, Italian seasoning, and garlic create an incredible combination of flavors.

Now add all the remaining ingredients except for the elbow macaroni. Stir together and bring to a boil.

Once the ingredients in the pot are boiling, add the macaroni noodles to the pot. Stir together, and turn the heat down to simmer, cover, and cook for 20 minutes.

Although the mixture may appear watery initially, everything will absorb together to create an incredible vegan goulash recipe.

When the time elapses, remove the pan's cover, and ladle it into bowls.
Though unnecessary, I always add a sprinkle of parsley, thyme, or chopped basil to the top.

Despite my husband's adverse childhood experiences with Hungarian goulash, I figured I could change his mind.

Fortunately, he ate two helpings, and I watched as he smeared bread around the bottom of the bowl to sop up the last bit of the sauce. He also took the leftovers to work the next day. My vegan Hungarian goulash changed his mind.

And the kids loved it, which is always a bonus! I served each bowl with hard-crusted whole grain fresh bread I warmed in the oven. The sauce is so delicious; it begs for some bread for dipping. Unless, of course, you want the kids licking their bowls.

What gives goulash its flavor?

Sweet paprika is the ingredient that gives goulash its distinctive warm flavor and reddish color! Since it's such a strong flavor, you must use fresh, good-quality paprika.

Is Goulash Italian or Hungarian?

Goulash (Hungarian: gulyás) is a soup or stew of meat and vegetables seasoned with paprika and other spices. Originating in Hungary, goulash is a common meal in Central Europe and other parts of Europe. It is one of the national dishes of Hungary and a symbol of the country.

What would you serve with goulash?

I served and made the goulash with noodles. But, you can skip the noodles and serve them over rice or mashed potatoes. I also served my vegan Hungarian goulash with a tossed green salad.

Try this tasty vegan Hungarian goulash recipe in one pot in under 30 minutes! And try not to lick the bowl!

If you Love Vegan Pasta Recipes, Try These Easy Recipes!

If you love this vegan Hungarian goulash, give us a 5-star rating and comment below. We would love to hear from you! 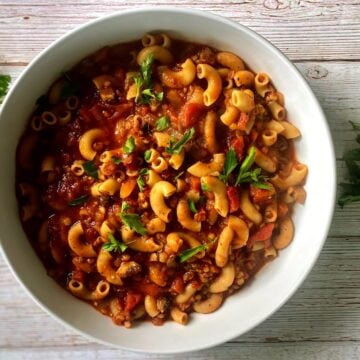