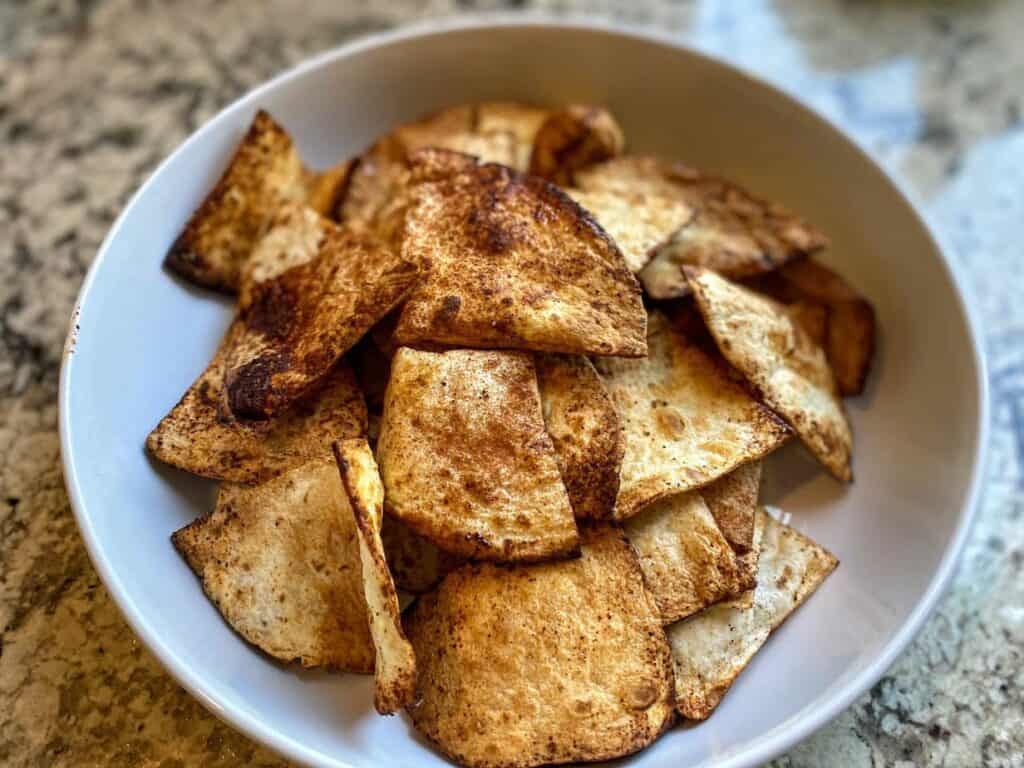 Regardless of the type of tortillas you choose, cinnamon tortilla chips are light, delicious, and are perfect for fruit salsa or any Mexican dish you enjoy. And, they only take 20 minutes to make an entire batch! 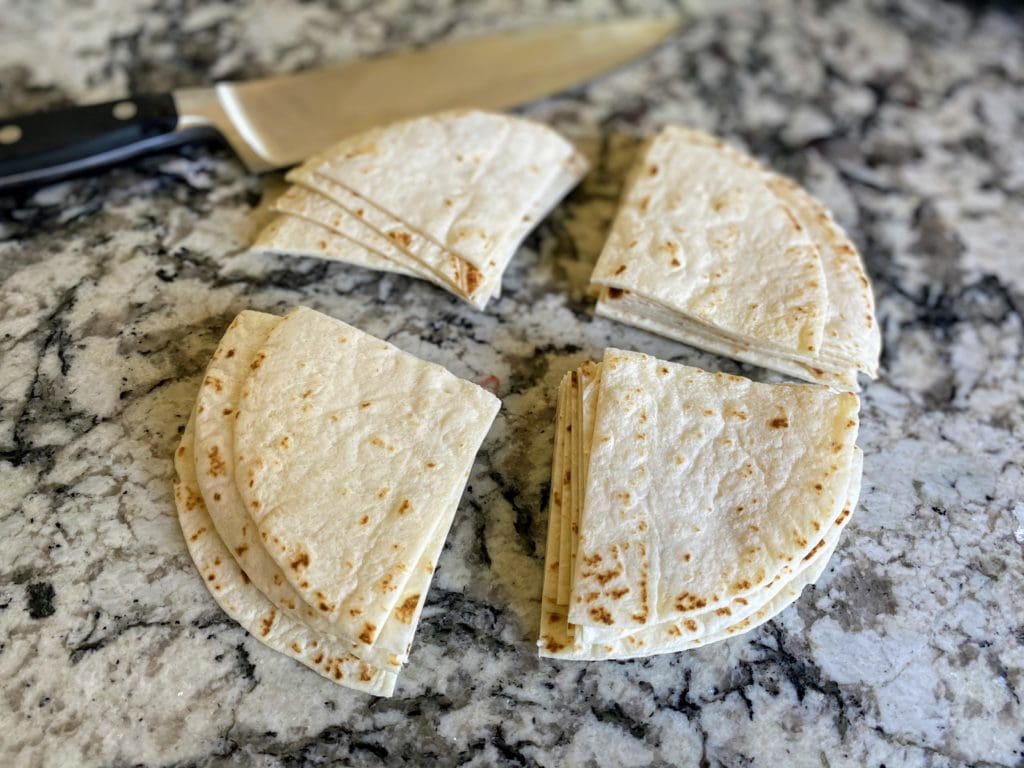 Every time I cook my Vegan Tortilla Soup recipe, I made oil-free air-frier lime tortilla strips for a crunchy topping. With that in mind, I wondered if I could make oil-free cinnamon tortilla chips in my air-fryer. So, using the same idea, I decided to use the same idea but add a few different seasonings.

My first goal, however, was to mix a few seasonings together for a sweet yet slightly spicy combination. First, I cut tortillas into quarters. For this cinnamon tortillas chip recipe, I chose 8 small tortillas. Both flour and corn tortillas, for example, work perfectly for this recipe. 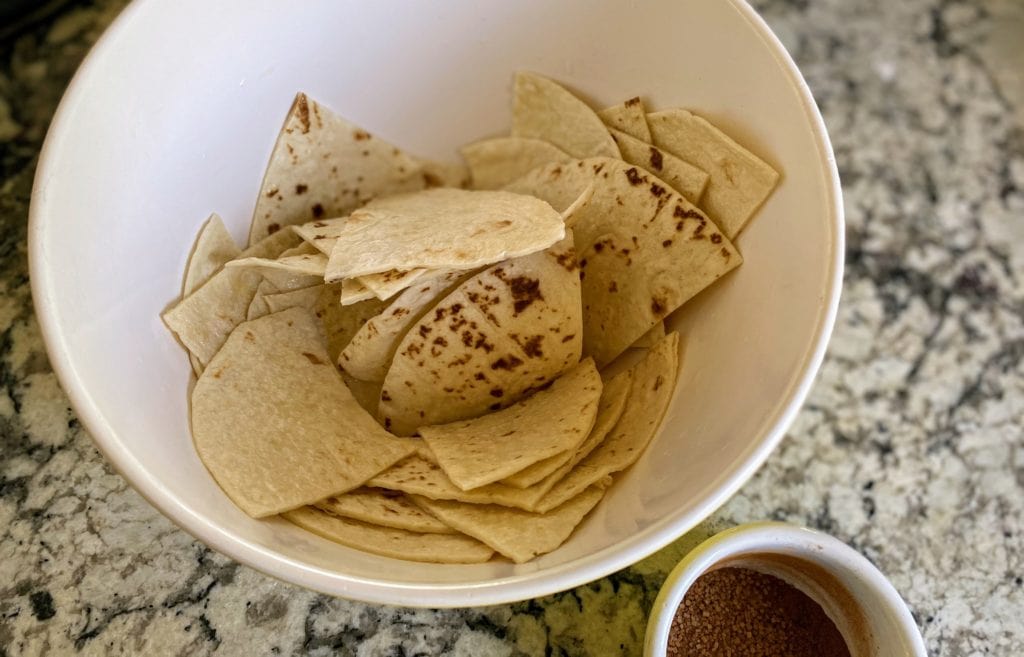 Then, I soaked the quartered tortillas with lime juice in a bowl, tossing them around with my hands, until they were all wet.

Next I combined cinnamon, chili powder, and a small amount of sugar (which is optional); you can also choose to use salt instead of sugar, or skip both altogether. 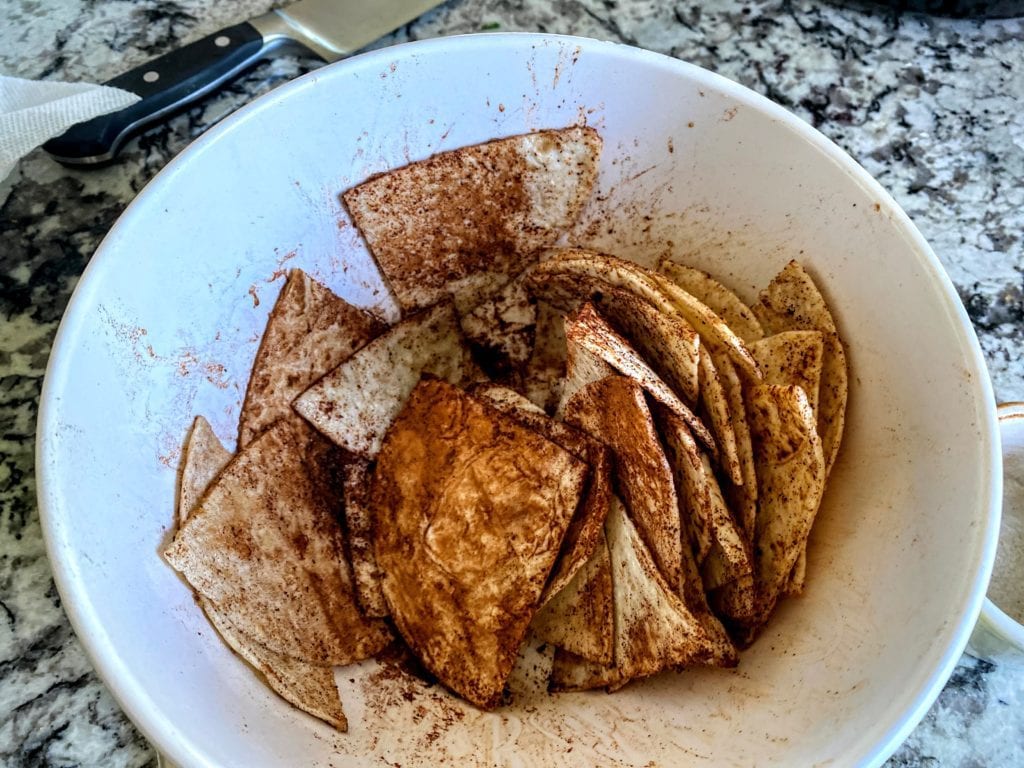 Once the seasonings are combined, I added to the bowl of wet tortillas, slowly tossing until covered in spicy goodness. 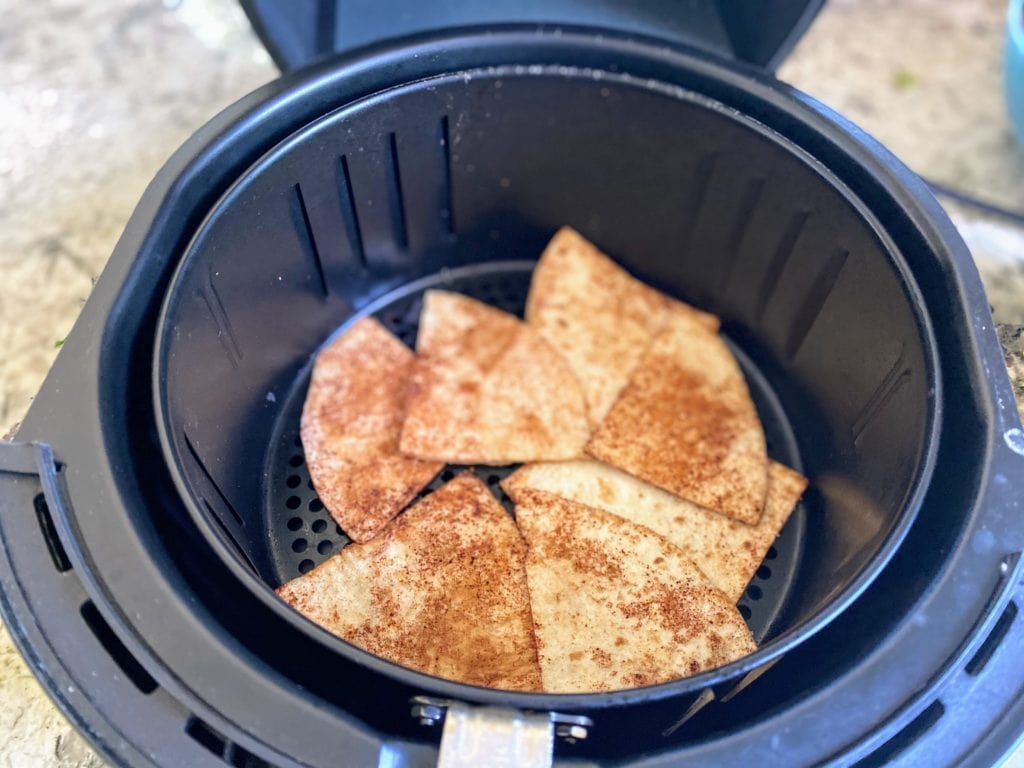 Once coated, I suggest cooking the tortillas, in shifts, in a single layer. As a result, the tortilla chips will stay uniform and not stick together. 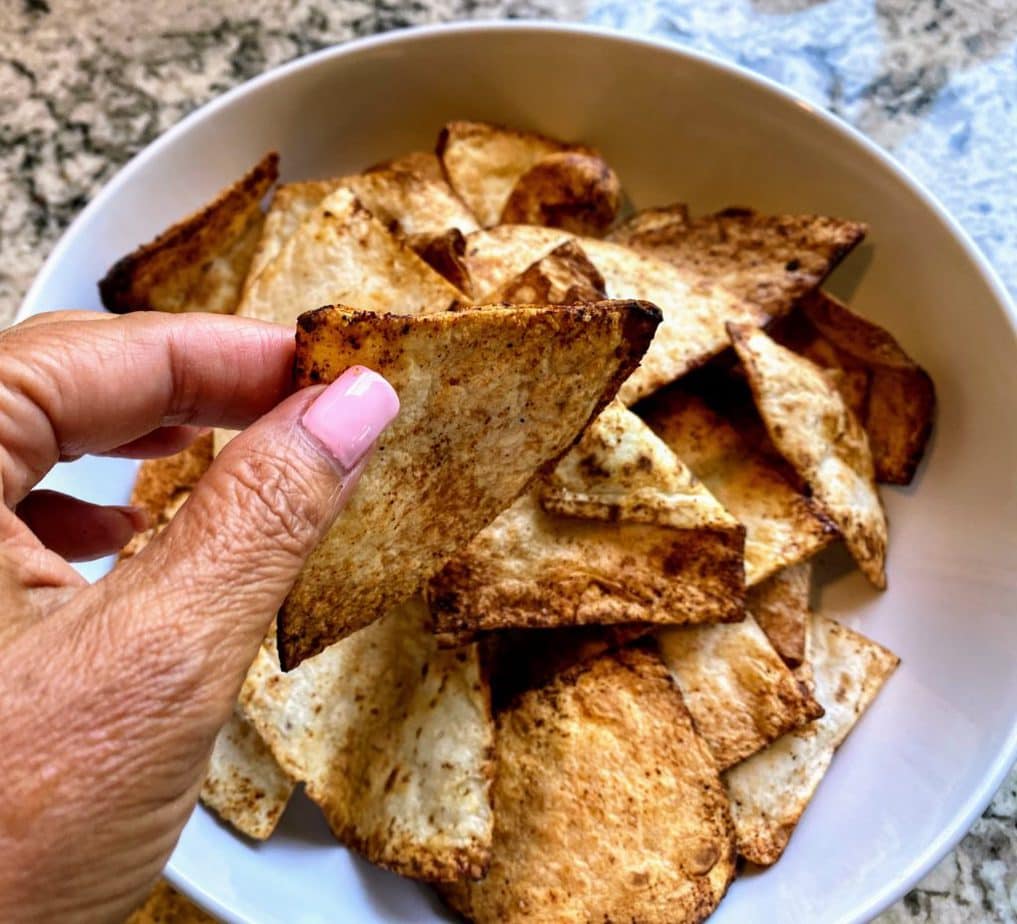 One of my favorite dishes that go perfectly with cinnamon tortilla chips is fruit salsa! 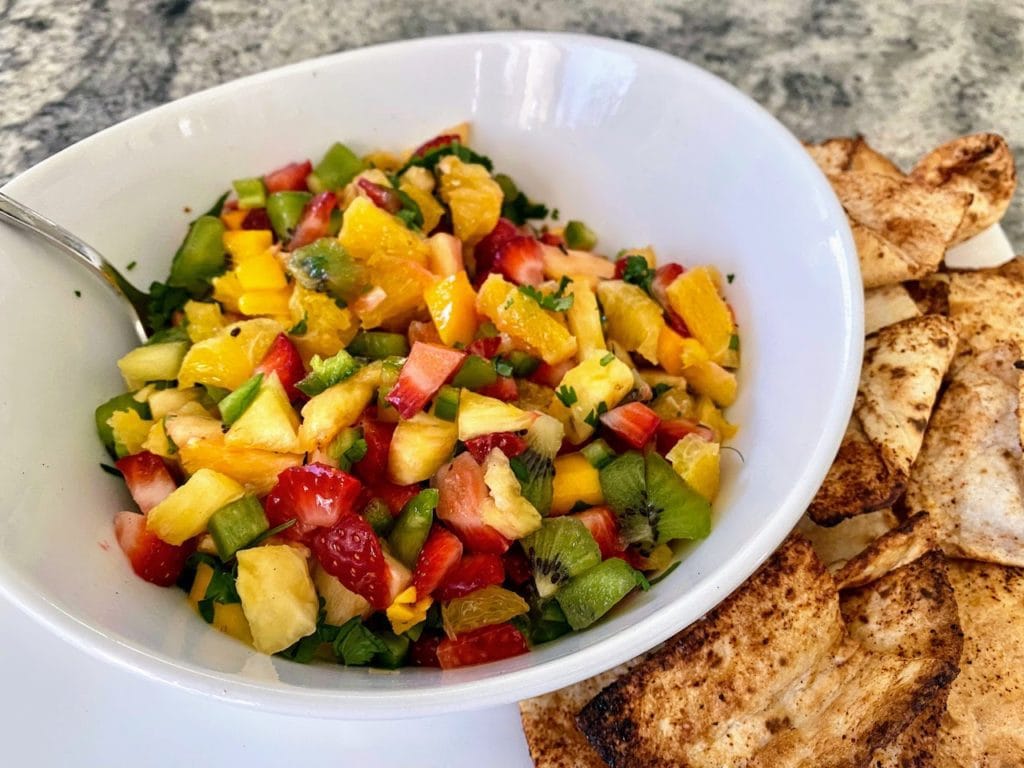 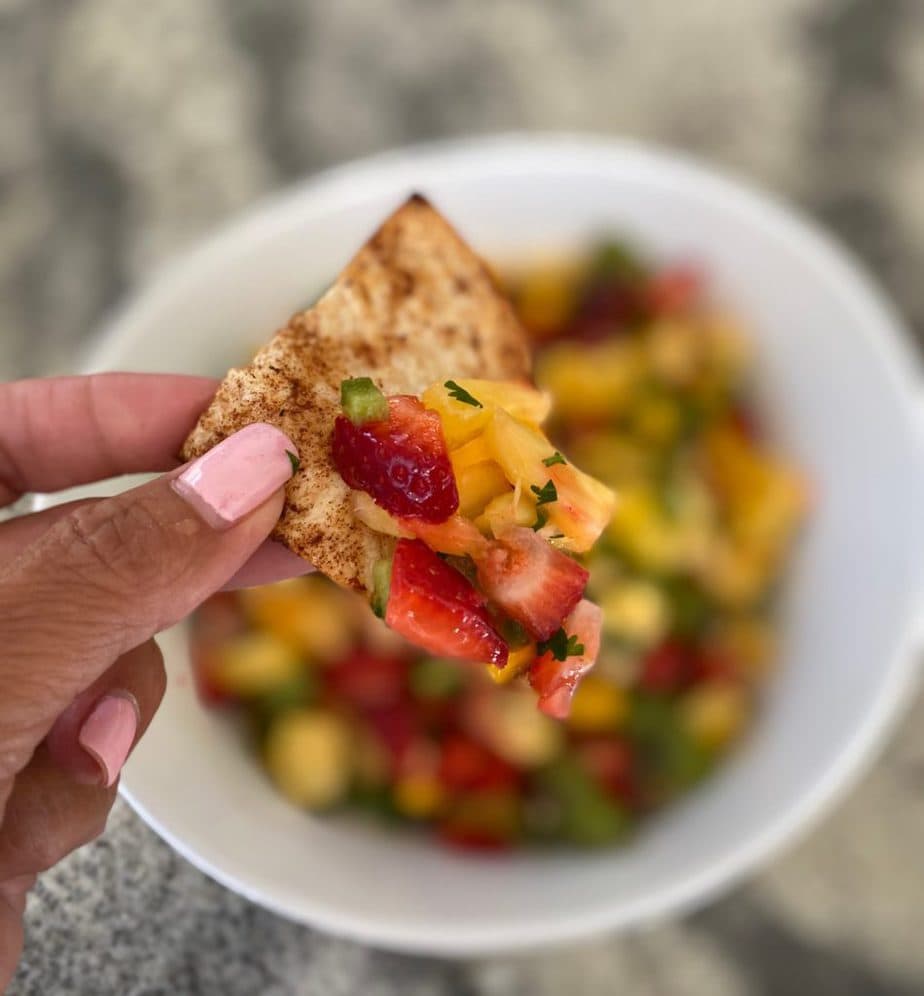 If you are looking for a great snack or a special way to serve a sweet treat, whip up some oil-free cinnamon tortilla chips! 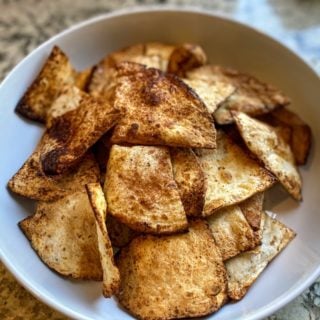 ALTERNATIVE COOKING METHOD (if you don't have an air-fryer)

One of my favorite dishes that go perfectly with cinnamon tortilla chips is fruit salsa!