Since the weekdays are hectic, I'm all about easy meals I can make ahead of time and cook when ready. Vegan enchilada is a casserole layered with vegetables, corn tortillas, and vegan nacho cheese sauce.

Another option for a quick and easy enchilada sauce for vegan enchilada casserole recipe is to combine two simple ingredients:

How to Make the Casserole

Once the first layers are complete, repeat with more tortillas, beans vegetable mixture, lentil meat (if using), and vegan nacho cheese sauce. Top with the rest of the enchilada sauce, and cover with aluminum foil for baking.

What is the difference between burritos and enchiladas?

While both enchiladas and burritos have similar ingredients, burritos usually use flour tortillas. Enchiladas, on the other hand, use corn tortillas.

Can I use flour tortillas for enchilada casserole?

What do you serve with enchilada casserole?

Mexican street corn salad, black beans and rice, lime and cilantro rice, or chips and salsa are all excellent side dishes for this vegan enchilada casserole recipe.

Instead of rolling individual enchiladas, make a quick and easy vegan enchilada casserole the whole family will love!

Other Mexican Recipes to Try

If you love this vegan enchilada casserole recipe, give us a 5-star review and comment below. We would love to hear from you! 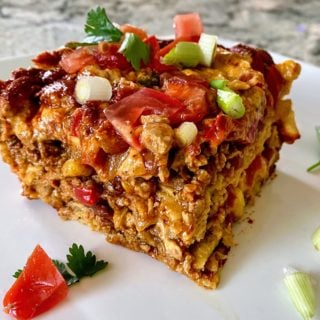 Kathy Carmichael
Take your enchiladas to the next level by layering them in a pan for a vegan enchilada casserole to die for. Layered with corn tortillas, vegetables, lentil taco meat, and oil-free vegan cheese sauce, this casserole can be made ahead of time and baked when you're ready to eat.
4.67 from 21 votes
Print Recipe Pin Recipe
Prep Time 15 mins
Cook Time 50 mins
Total Time 1 hr 5 mins
Course Entrees
Cuisine Mexican
Servings 6 servings
Calories 462 kcal