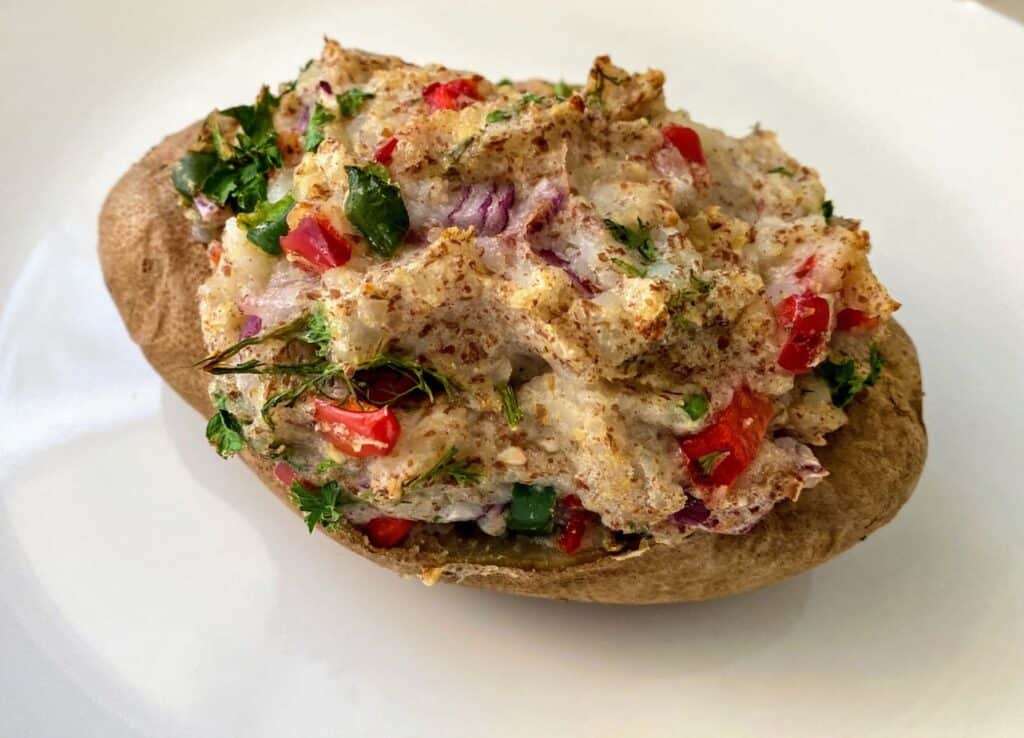 How do you love your potatoes?  Air Fried and Crispy, Scalloped Potatoes or maybe Vegan Mashed?  Everyone in my family has a personal favorite potato recipe. But, what we all have in common is loving this vegan twice baked potato recipe.

French fries, known as my nemesis, are easily made healthy by baking fries or  Air Frying. Vegan twice baked potatoes, however, take a little creativity to keep them healthy.

For that reason, I created two different vegans twice baked potato recipes which are healthy and delicious.

The best part about these twice-baked potatoes, for instance, is that everything can be made the day before and stored in the refrigerator, so all you have to do is pop them in the oven when you’re ready.

And, you can also freeze vegan twice baked potatoes, but always remember to thaw completely before cooking for the best results.

For example, since vegan twice potatoes are baked twice, they must be baked the first time in the oven. How you cut the potatoes, however, is different than opening a regular baked potato.

Typically, potatoes are baked and sliced lengthwise and pushed open. Instead, I suggest using a paring knife and cutting a very shallow hole in the top of each potato, and just removing only the cut potato skin.

Once the potatoes are cool to the touch, remove the flesh and place in a large bowl. Then, using an electric mixer, follow the directions to mix the filling and then add other toppings before baking a second time.

THE BASICS FOR BAKING VEGAN TWICE BAKED POTATOES: ROUND 1

WHAT INGREDIENTS ARE NEEDS FOR VEGGIE FILLING? 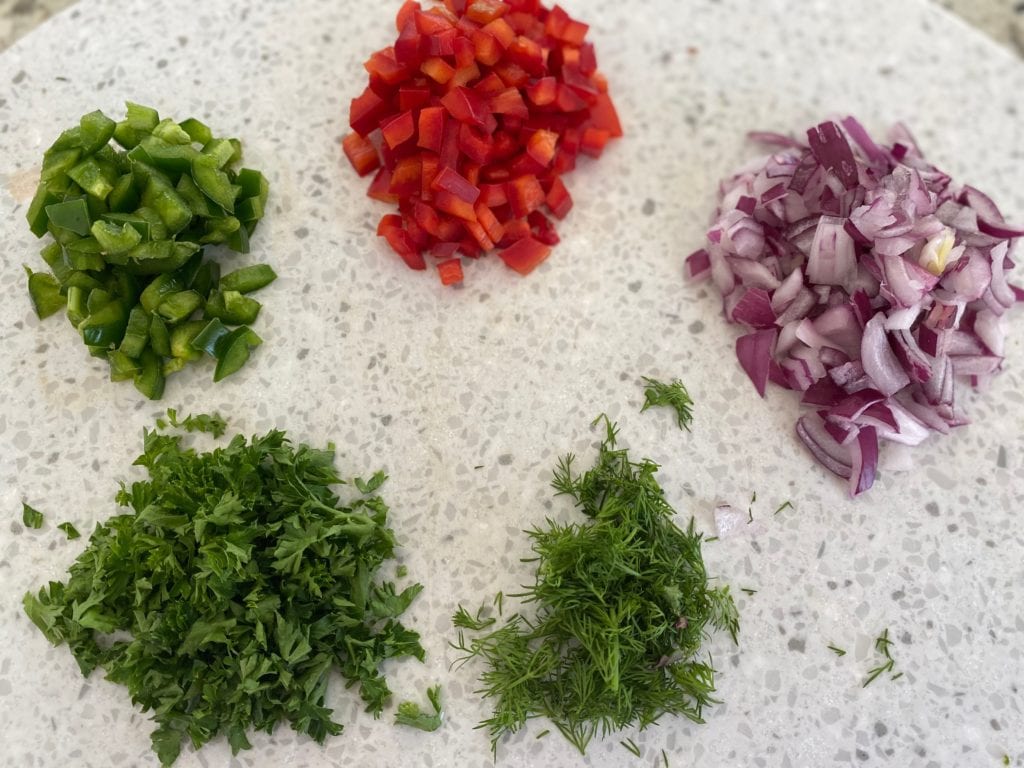 For this particular filling, I used fresh herbs and vegetables, plant-based milk, a flaxseed egg, and some seasonings. The flax seed egg, combined with the warm flesh of the potato and the plant-milk, creates a creamy mashed potato base. Then, I simply add the fresh chopped vegetables, herbs and seasonings, and restuff each potato.

One important tip to note is to always use unsweetened, unflavored plant milk when cooking. Once, my son attempted to make Cashew Miso Mac and Cheese and accidentally used vanilla flavored almond milk. Needless to say, the entire meal was a disaster.

WHAT IS A FLAX EGG? 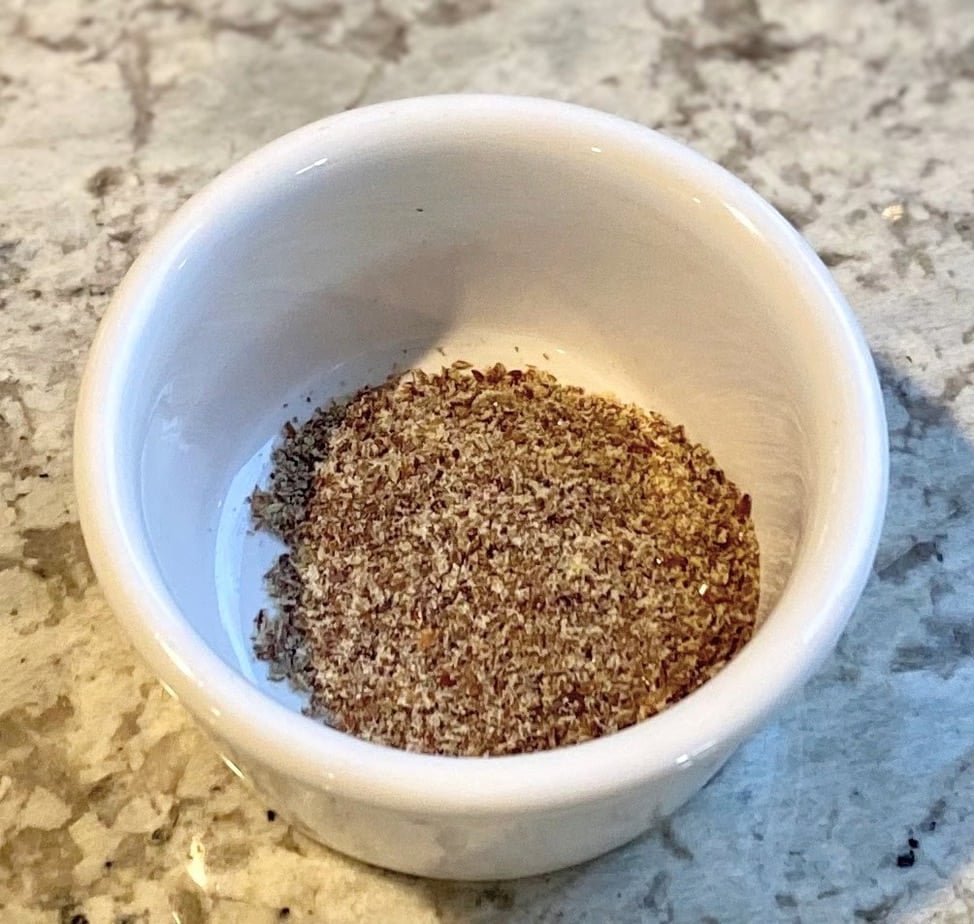 A flax egg is a vegan egg substitute, that is made up of ground flax seeds and water. Since, flax eggs are  100% natural, vegan, gluten-free,  it the perfect egg substitute. Even though eggs are not typically used in "mashed potatoes," a flax egg, mixed with the potato and milk makes a great binder. Instead of using butter or oil, the flax egg supplies the creaminess.

To make a flax egg, it's simple; just combine the flax meal and water and allow to sit for a few minutes before adding to the vegan twice baked potato mixture. 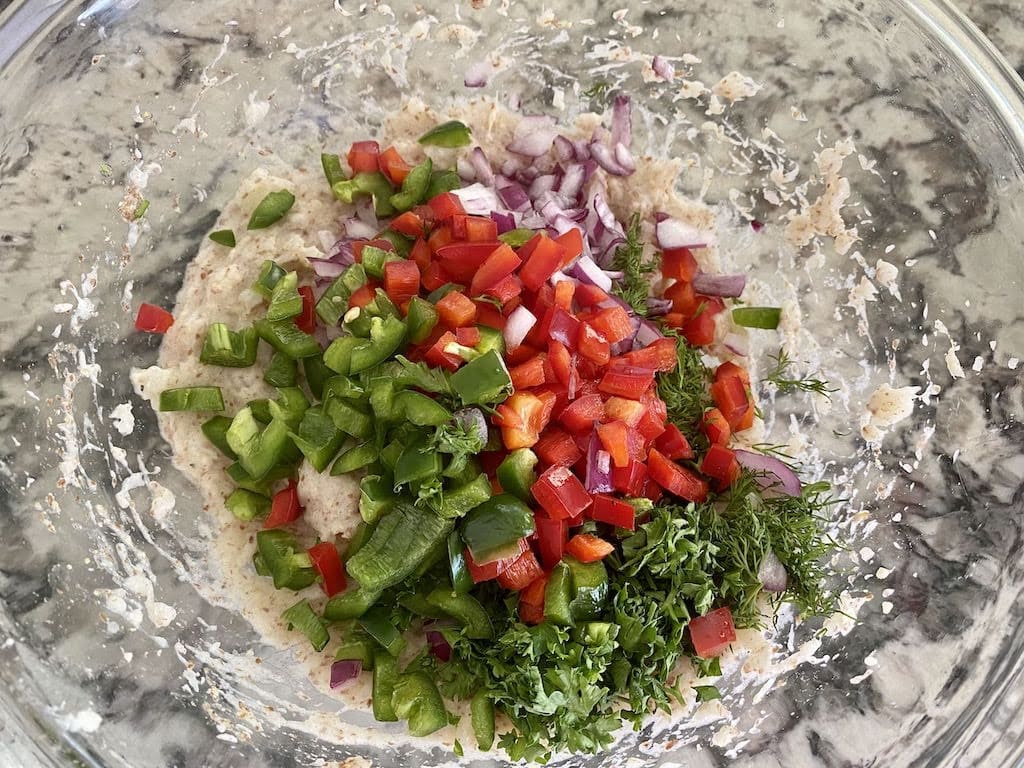 As soon as the potato flesh, flax egg, and plant milk are mixed together with an electric mixer, simply add the raw veggies, herbs, and spices. Next, restuff the veggie filling into the shelled potato boats. 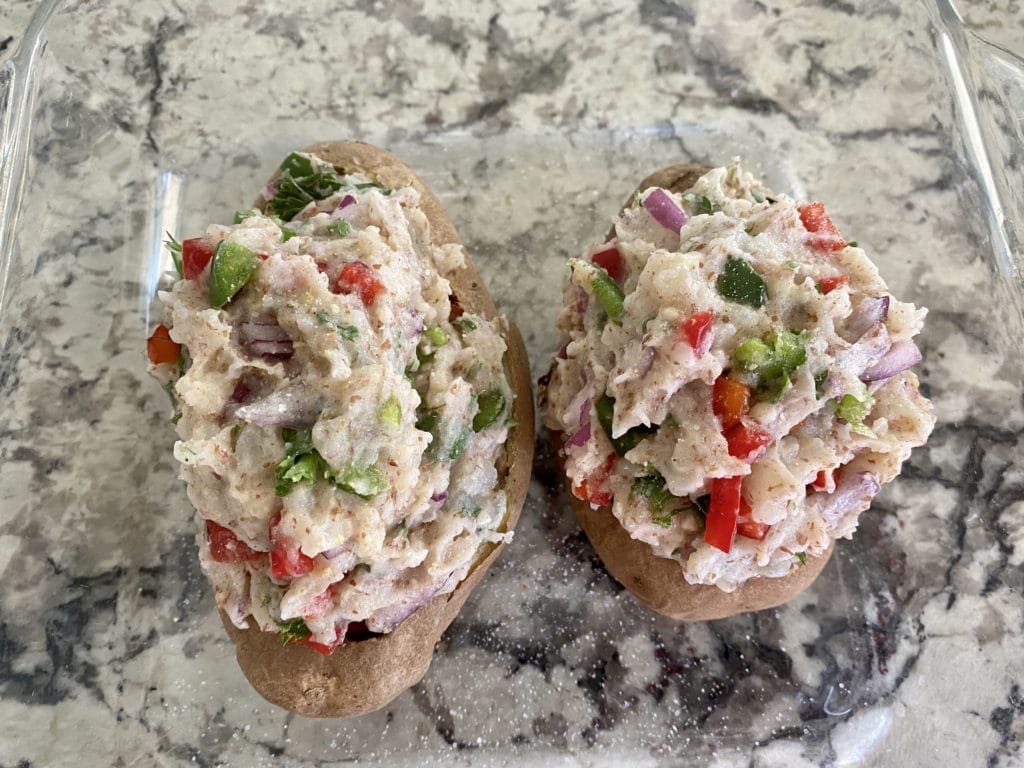 At this point, you can either cover the potatoes and place them in the refrigerator until you are ready to bake them a second time. Or, place them in a 350-degree oven for 30 minutes. 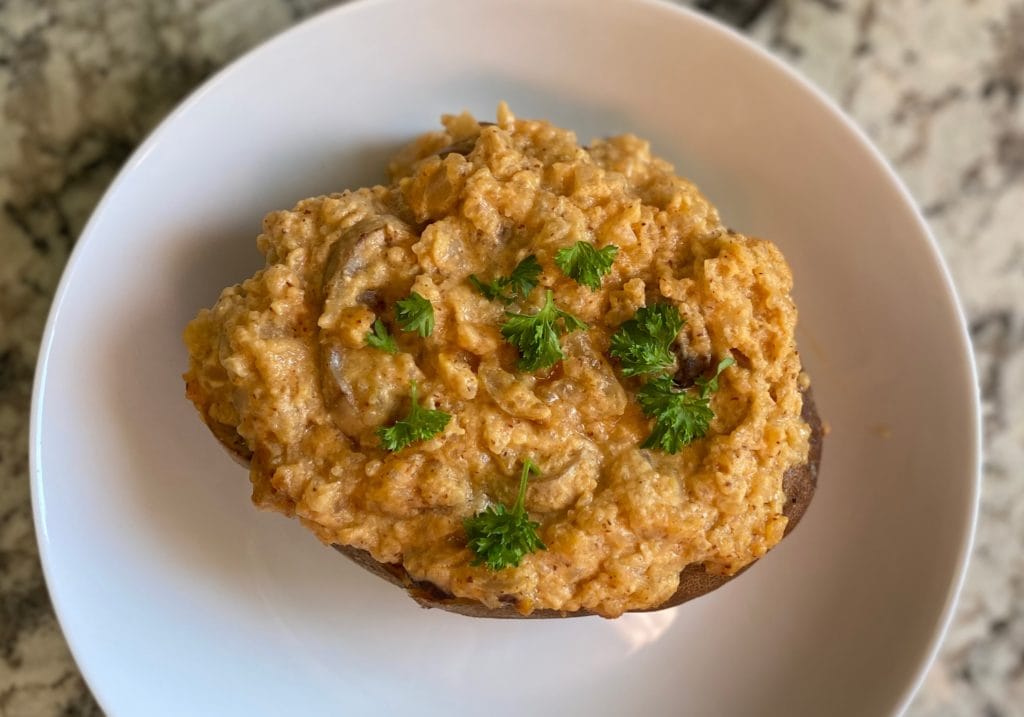 In fact, ½ cup of Nacho Cheese Sauce mixed in with the potato flesh makes a creamy and savory mixture. Then, I add sauteed garlic, mushrooms, and onions, and restuff the potatoes. Personally, this is my favorite twice baked potato filling because I love my  Nacho Cheese Sauce! 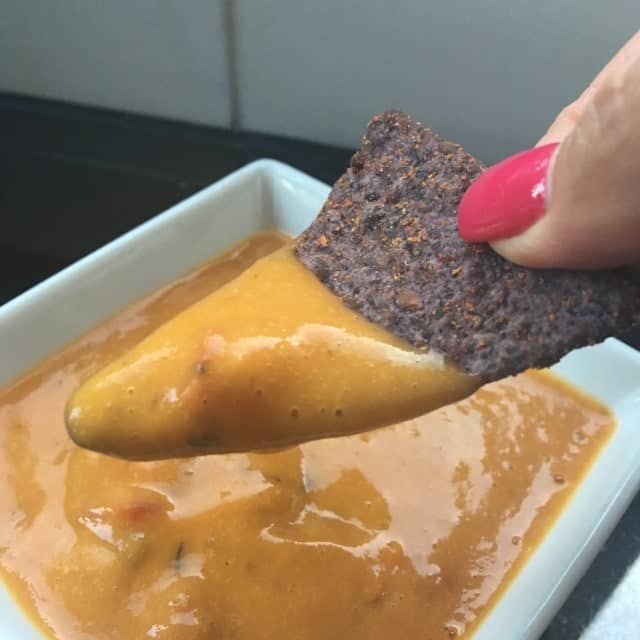 When I make Nacho Cheese Sauce, I always make a full batch with a plan of making a variety of cheesy dishes throughout the week: 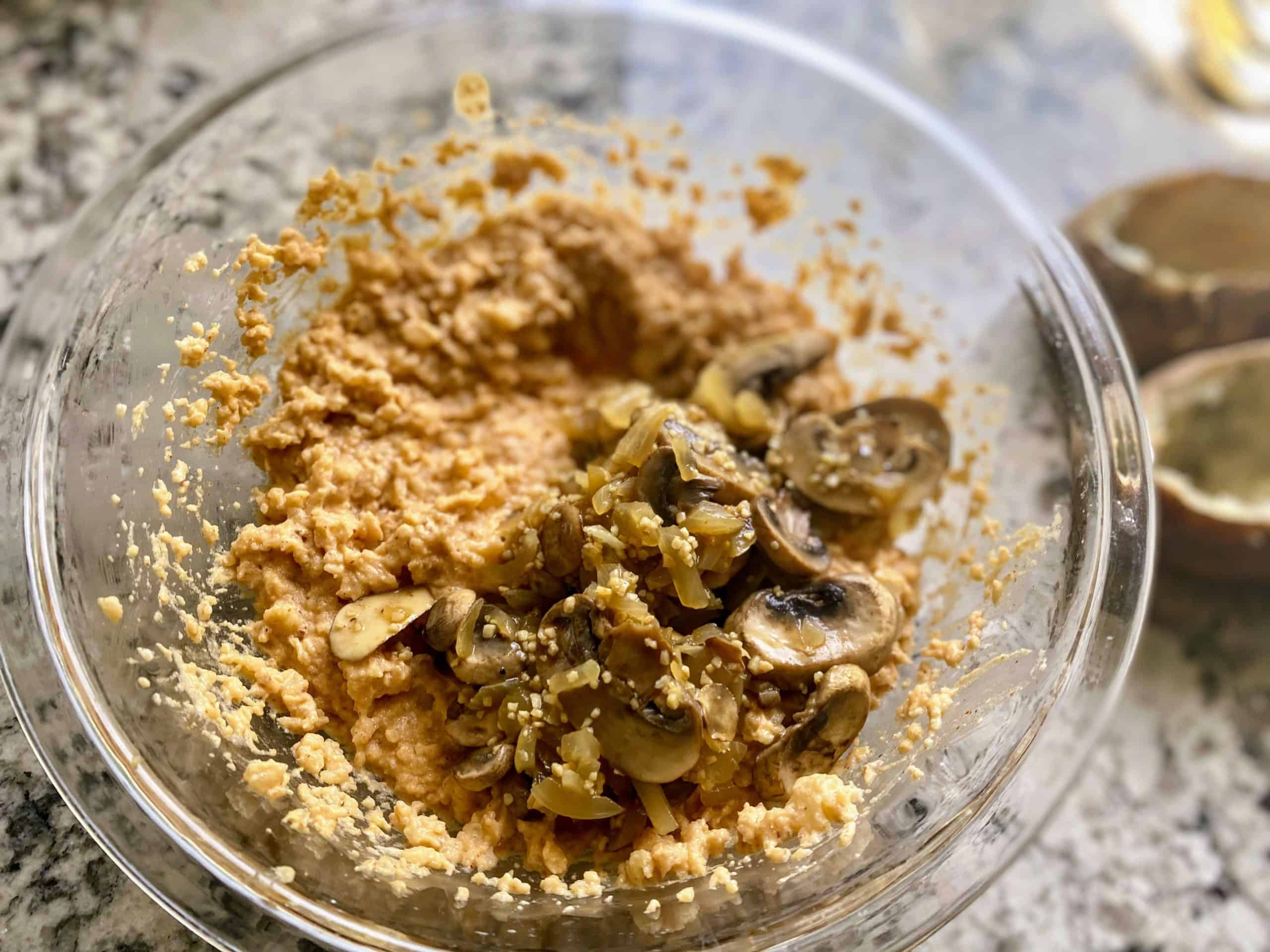 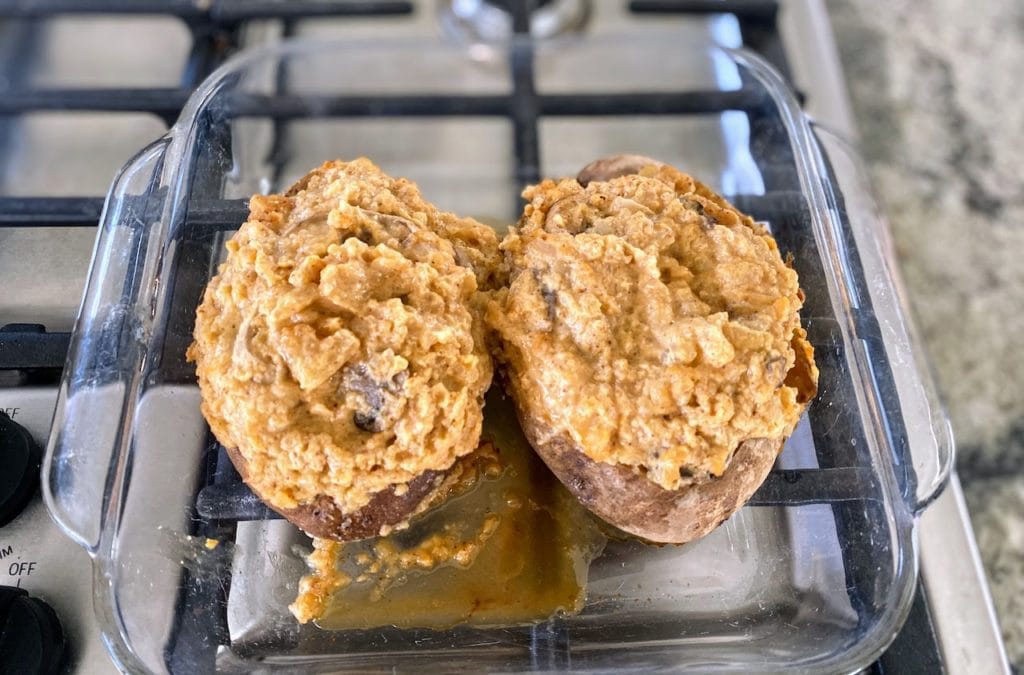 Again, this version of vegan twice potatoes can be made ahead of time and baked when chosen. Furthermore, the baking directions are exactly the same for both versions of the vegan twice-baked potatoes recipe.

Additionally, there are several possible combinations of ingredients I love to stuff inside vegan twice baked potatoes. Some of those ideas include: 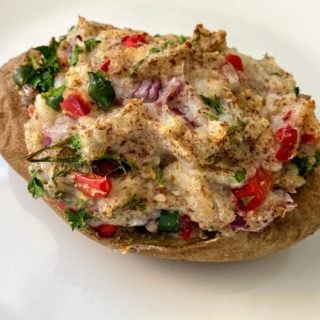 A flax egg is a vegan egg substitute, that is made up of ground flax seeds and water. Since, flax eggs are  100% natural, vegan, gluten-free,  it the perfect egg substitute. Even though eggs are not typically used in "mashed potatoes," a flax egg, mixed with the potato and milk makes a great binder. Instead of using butter or oil, the flax egg supplies the creaminess.