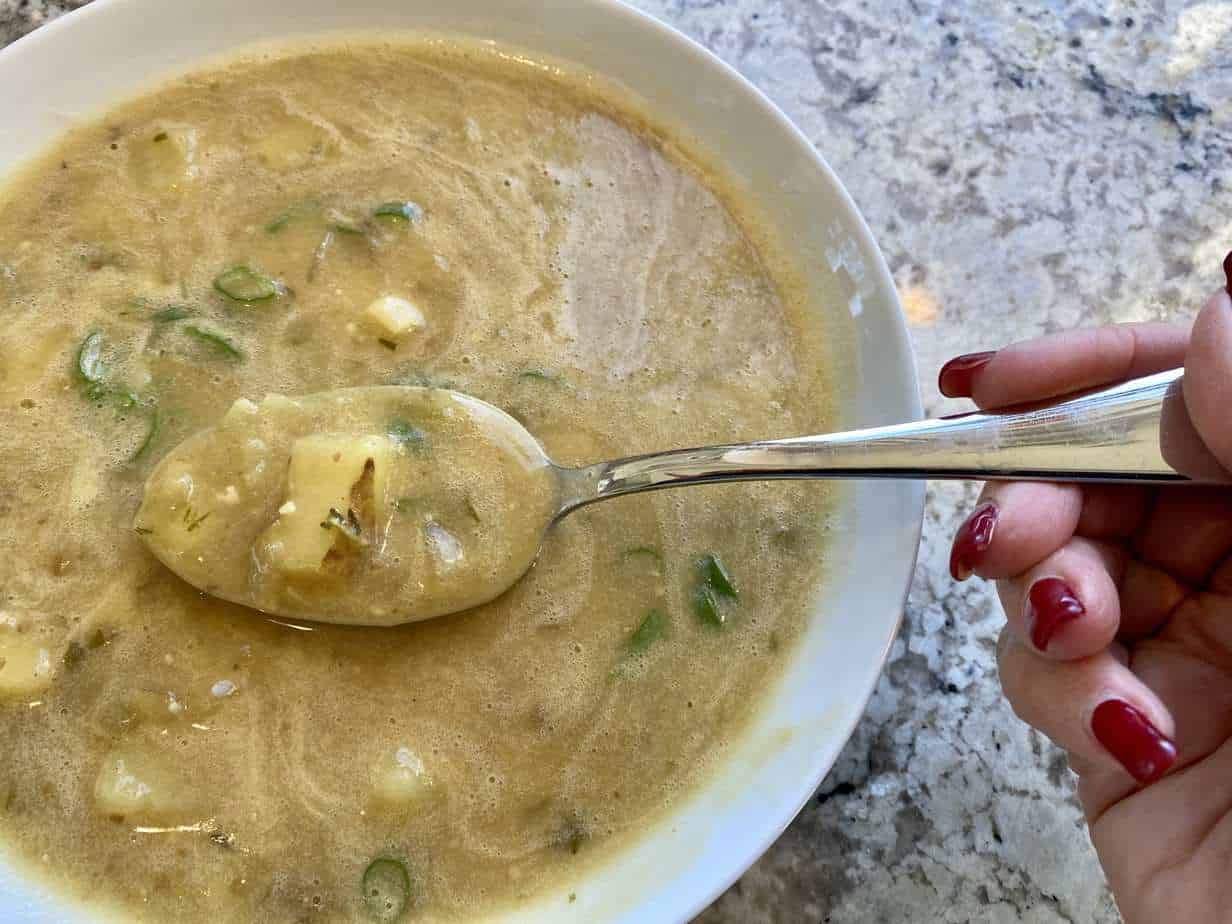 Potatoes, in my opinion, are an excellent vegetable because the starch in the potato makes it absorb the herbs and spices added to the soup. Thus, they act like sponges, absorbing any flavors added.

Despite the belief creamy soups need cream to be creamy, you can make a creamy, savory soup using only vegetables and vegetable broth.  Although creamy and delicious, this vegan leek soup recipe is also low in calories.

WHY LEAVE THE POTATO SKINS ON THE POTATOES WHEN YOU CHOP AND COOK THEM?

Eating the skin on a russet potato, for instance, provides more nutrients than the interior of the potato. Not only is the skin nutritious, but It also has a lot of fiber, half of which comes from the skin.

For that reason, more often than not, I leave the skin on potatoes whenever I cook. As a result, I always wash my potatoes with a brush first before I cut them. Then, after I cut the potatoes into equal-sized pieces, I put them in a colander and washed the potatoes a second time to remove all the dirt. 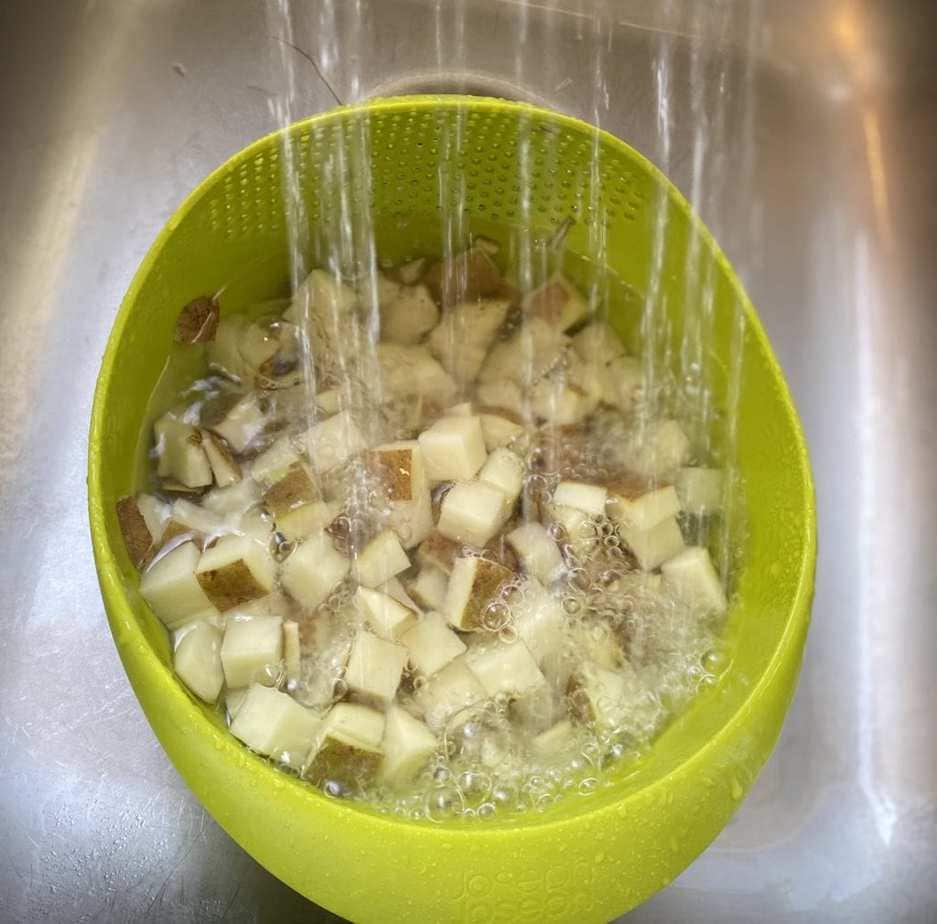 Although potatoes sometimes get a bad reputation because they are carbohydrates. In reality, a medium potato contains 110 calories.

Cooked potatoes with skin, for example, possess many vitamins and minerals, such as vitamin B6, potassium, and vitamin C. Additionally, potatoes are high in fiber and very low in fat. 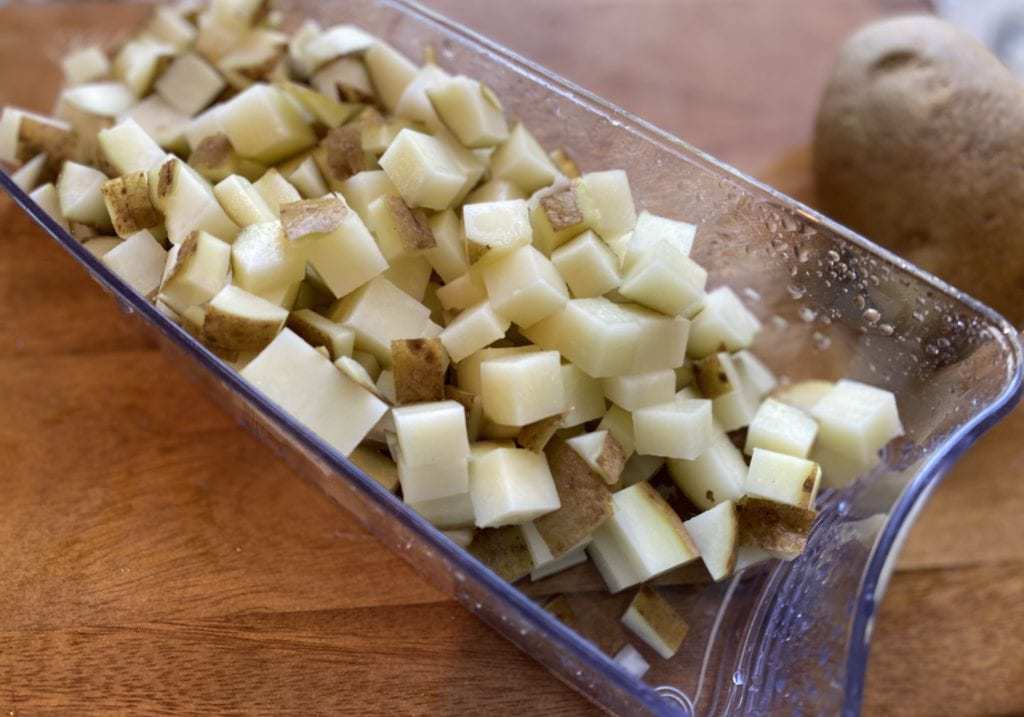 WHAT IS A LEEK, AND HOW ARE LEEKS DIFFERENT THAN ONIONS?

Also, like green onions, leeks taste mild when compared to onions. When appropriately cooked, leeks enhance the flavors of other vegetables used in a vegan potato leek soup. 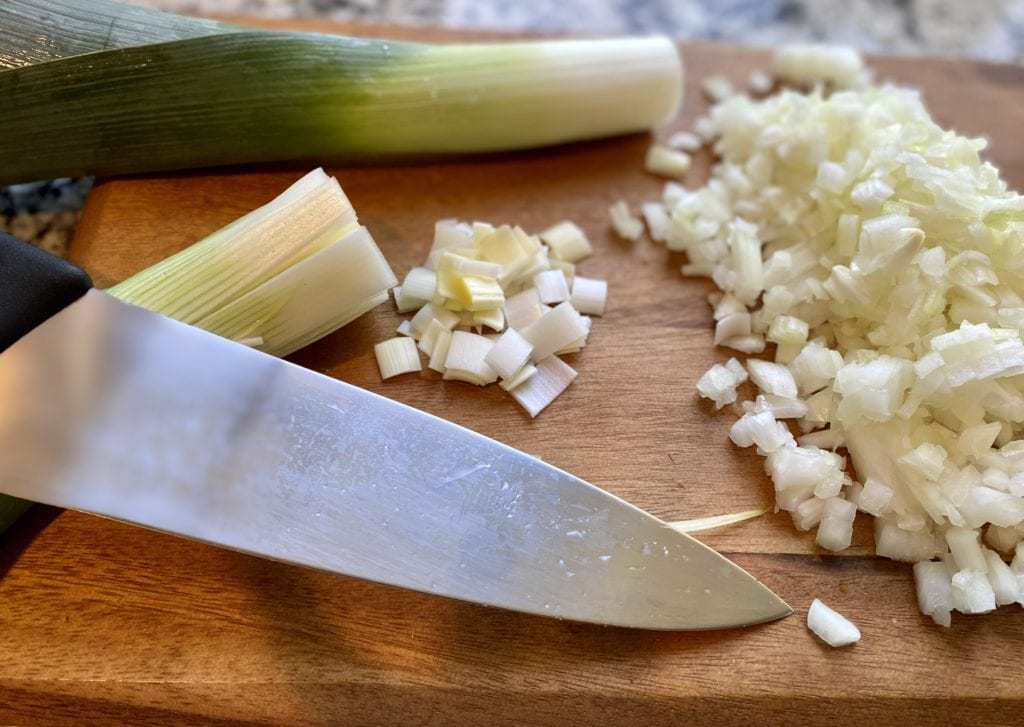 Slightly sweet, leeks can be boiled, braised, or roasted. For this vegan potato leek soup recipe, the leeks are sauteed with onions and garlic and caramelized to create a savory and delicious flavor.
Learning how to clean leeks, though, is essential.  Often, trapped dirt remains folded into leaves. As a result, it is necessary to remove its layers before cutting the bulb. Rinsing the leeks a second time removes any additional dirt and debris.

First, I saute the onions, leeks, and garlic together, adding a little vegetable broth as they caramelize.

Once translucent, add the chopped potatoes, cover the potatoes with 4 cups of vegetable broth, and add the seasonings and herbs. Then, I bring it to a boil to help the flavors mesh, lowering the temperature to simmer, and cooking covered for 30 minutes. 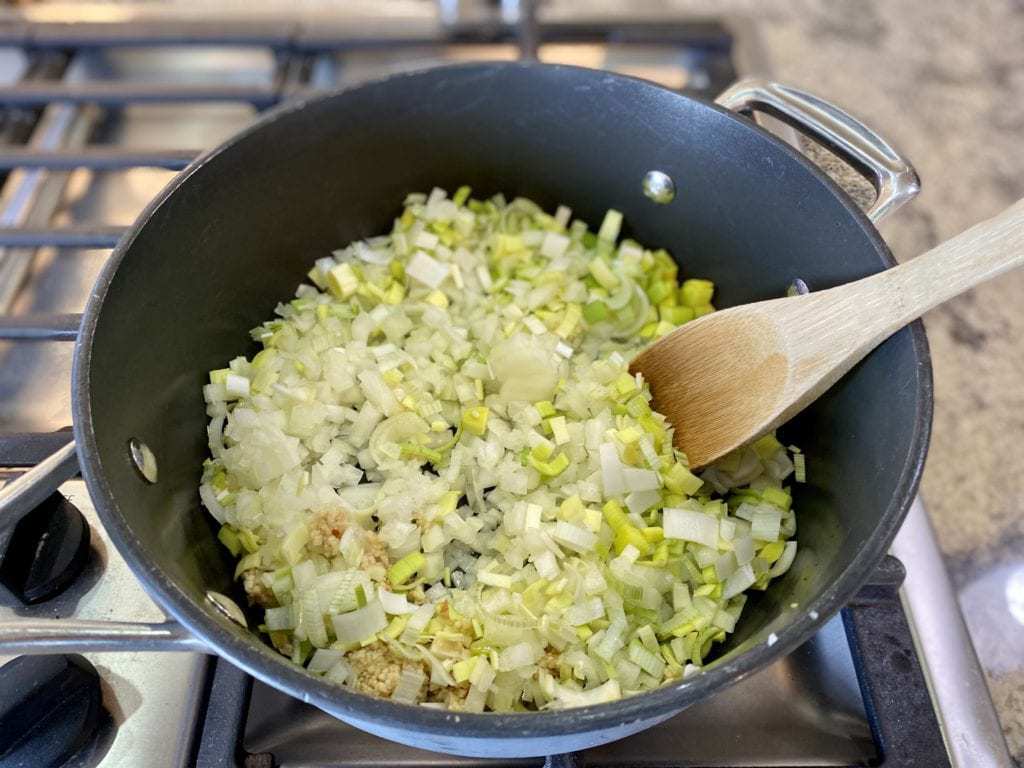 Next, I uncover the vegan potato leek soup, add another 4 cups of vegetable broth, and bring it to a boil a second time. However, this time, I leave the cover off, reduce it again to simmer, and cook another 20 minutes. 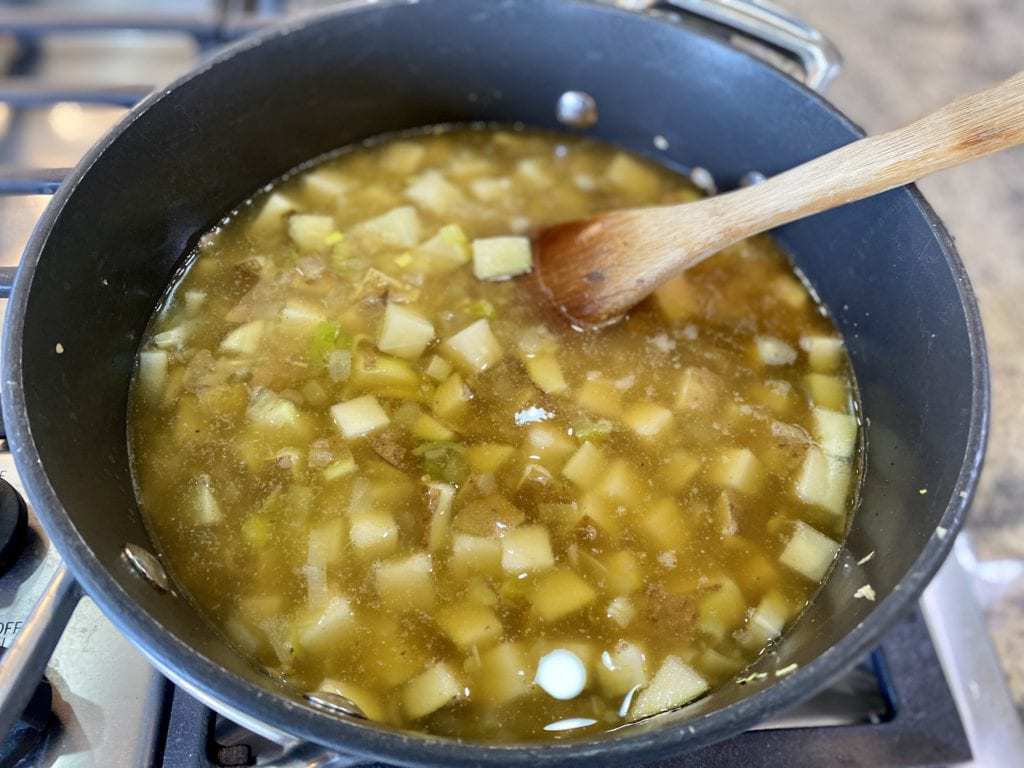 Then, you get to choose if you want to blend the entire vegan potato leek soup recipe or blend half the soup and leave the rest thick and chunky. In my opinion, thick and chunky with a creamy base is the way to go.

So, I only remove half the soup, place it in my Nutri-bullet blender, and blend until smooth. 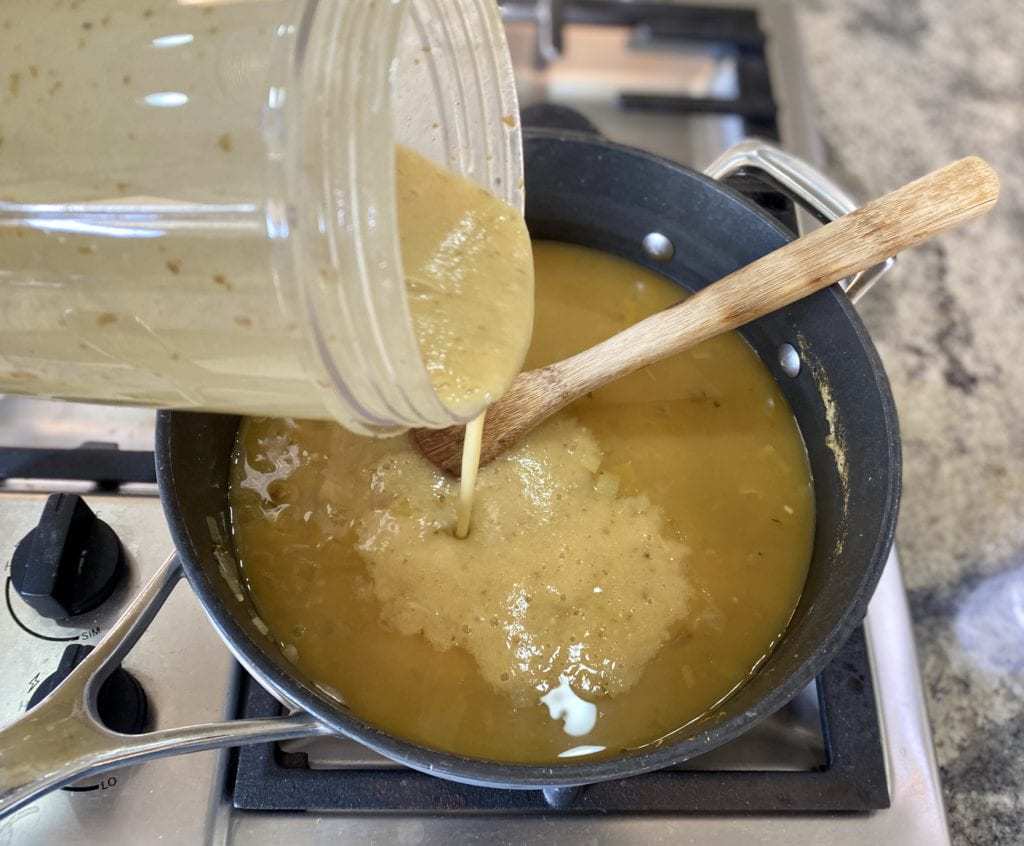 When you take a bite of vegan potato leek soup, you feel like you are cheating and eating a thick, savory, and fattening soup. But, in reality, you are eating vegetables and only vegetables. My secret ingredient is a little dash of cayenne pepper to get it a little added heat. 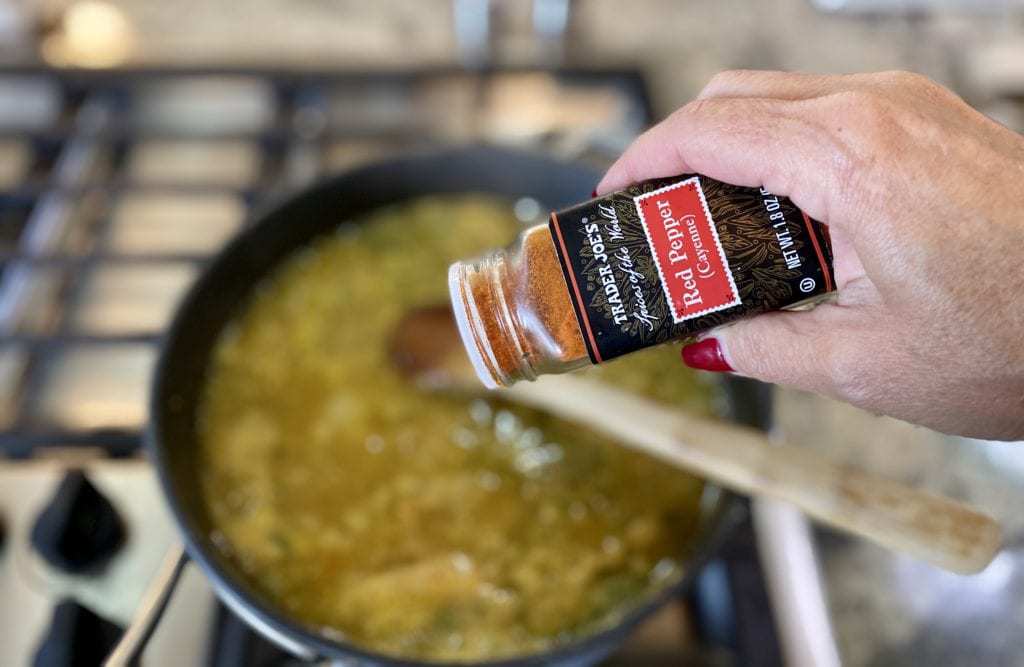 This recipe makes 6 servings; I make it on the weekend, and it heats up nicely to take to work. Furthermore, this soup recipe freezes well. Just make sure you thaw it before reheating.

Note, however, always add pepper or cayenne in smaller amounts to appeal to individual preference. Although I love spicy food, not everyone enjoys spice. 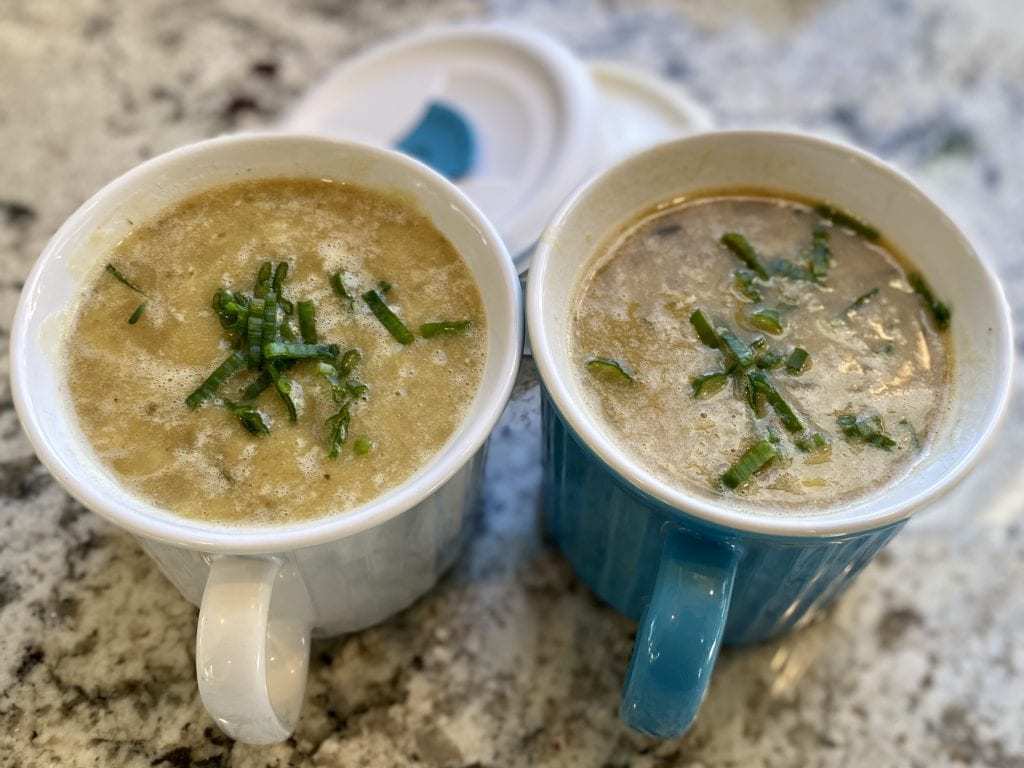 You won’t believe this vegan leek potato recipe is made with all veggies! But, try it; you’ll love it.

Do you love healthy vegan soup recipes? Give these recipes a try! 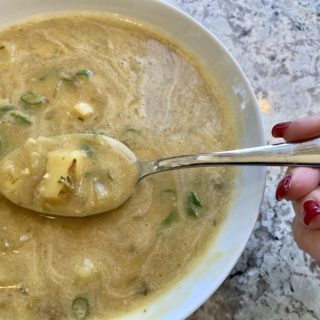 For those sensitive to spice, add ¼ teaspoon of cayenne and black pepper. taste, and add more to meet individual preferences.